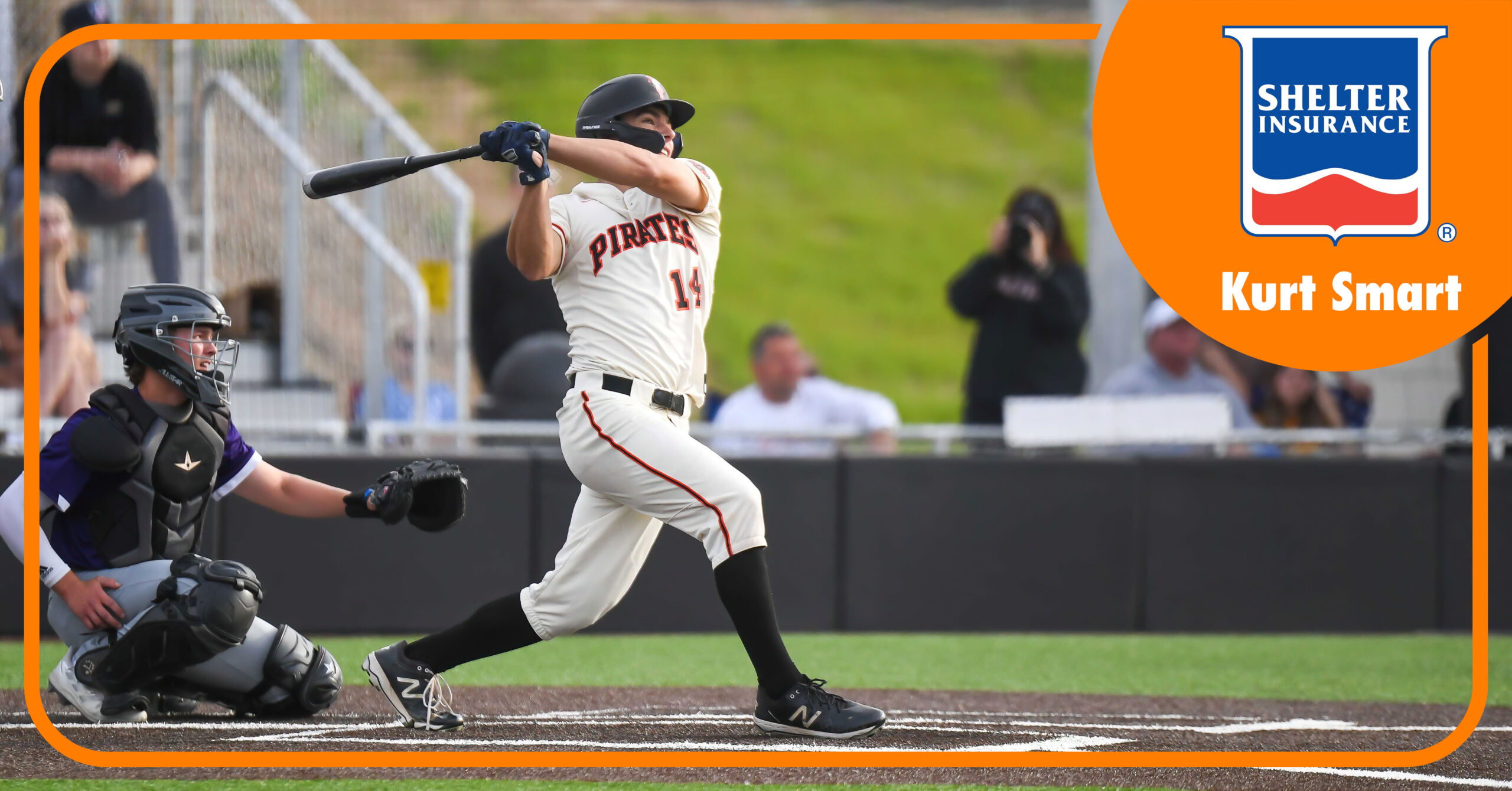 Platte County’s sophomore left-handed hitter took the first pitch he saw leading off the bottom of the sixth from Eli Helberg and stroked a tie breaking solo home run over the right field fence at Platte County High School. The Pirates didn’t need any more offense with sophomore pitcher Brayden Carter closing the door on a 2-1 victory Wednesday with a quick 1-2-3 seventh in a key Suburban Conference Blue Division matchup.

Wassmann’s home run ended up the pivotal moment with teammates hopping out of the dugout on contact, knowing exactly where the ball would end up.

“That’s exactly what we needed right there — break us open, get us the lead going into the top of the seventh,” said Platte County senior catcher Jake Knudsen, who went 1-for-3 with a double and the first run scored. “That’s it. That’s what he does. He’s clutch like that.”

Earning a season split with the Bulldogs, Platte County (18-8) kept control of the league championship and Class 5 District 8 No. 1 seed races in their control. The Pirates ran their winning streak to five straight — a run that ended a night later on senior night against Grain Valley.

Carter threw 2 2/3 scoreless innings of relief with a pair of strikeouts behind senior left-handed starter Sawyer Allen, who entered off of a historic six-inning perfect game less than a week earlier against Winnetonka. He set down the first two batters he faced against Kearney, too, before hitting a pair of batters and ended up going 4 1/3 innings with six strikeouts and just one run allowed in a no decision.

“Just joked with him, have fun,” Knudsen said of trying to help keep any pressure off of Allen related to following up his perfect game. “He’s a friend. We’re all friends on the team so just keeping it nice and loose — just like practice.

Kearney totaled just four hits and one walk after winning the first matchup between the two teams 6-0.

Platte County struck first this time around when Knudsen, who splits starts at catcher with junior Cameron Dean, doubled to left field with one out in the bottom of the second. Pirates junior right fielder Dayne Wimberly immediately followed with an RBI single to right field for their first run of the season against Kearney.

The inning ended when junior first baseman James Schwieder grounded back to the pitcher for a double play in what ended up a sign of events to come, but the 1-0 lead gave a jolt of confidence to Platte County.

“That was good to break it up and kind of relieve that tension,” said Knudsen, who is hitting .444 this season — second among Platte County players with at least 35 plate appearances.

Allen’s scoreless streak came to an end in the next half inning when he allowed a one-out triple to right.

Kearney’s tying run came home on a groundout, but the Bulldogs immediately added a two-out double to create another threat. Allen then issued a five-pitch walk before getting a groundout out to first to keep the score at 1-1.

Both teams put runners on base in the following innings but struggled to keep them.

Platte County hit into a double play in the third, fifth and sixth, while the Pirates doubled up Kearney in the fifth and the sixth after Allen struck out the side in the fourth. In the top of the fifth, the Bulldogs chased Allen with a one-out single and then added a runner on the first batter Carter faced with help from an error.

Carter immediately induced an inning-ending double play with a ground ball to shortstop Cameron Lewis, who was carried toward the bag for a forecourt before throwing to first base.

“I thought the boys did an awesome job of just being in the moment and not trying to do too much,” Platte County coach John Sipes said. “There were many times where we could’ve just had mass chaos happen.”

Wimberly, who finished 2-for-2 at the plate, singled with two outs in the fourth but was stranded.

Platte County senior Landon Fulk led off the bottom of the fifth with a single but was tagged out on freshman Dayton Doll’s soft ground ball to second. Kearney’s second baseman then made the throw to first for the double play, and the threat ended.

Carter worked around a one-out single in the top of the sixth with another inning-ending double play when Platte County third baseman Nick Baker caught a line drive and threw back to first to double off the leaning runner. Carter, who only made his varsity debut as the starter and winning pitcher in a victory over Class 6-ranked Liberty North, continued to shine with a blend of velocity that so far has kept hitters off balance.

“He has got confidence,” Knudsen said of the young lefty. “Once we got that fastball and that curveball working, it was great — specially his off-speed. We can get hitters off coming off of a pitcher like Sawyer. He’s got that speed and then we mix it up and get those curveballs in there.”

After each of the last three half innings included a double play, Wassmann didn’t hesitate to pick on the right pitch. The no-doubt smash ended up as his team-best third home run of the season, and Sipes knew the potential importance of the at-bat for one of Platte County’s hottest hitters.

“I told him right before he went up there, I said, ‘Devin, hit this to the moon,’ so he listened and came out on top” he said.

Incidentally, a double play followed Wassmann’s home run, erasing Baker from the base paths after he singled, and Knudsen grounded out to finish the inning.

Instead of going to junior reliever Tyler Erickson, Sipes stuck with Carter, who induced a popup to shortstop, recorded his second strikeout and ended the game with a soft groundout to third base. Kearney’s best chance to lead ended up being in the first with the two hit batters, but Knudsen ended that inning with a throw in behind the runner at first base for a pickoff — the second play of that type in recent games for the breakout senior star.

“Throwdowns have been feeling really good,” he said. “Got a lot of confidence there. We were talking about — me and Schwieder — before the game our communication with runners on the bag. We saw that runner getting a little too big. We just had (two hit batters) so I tapped my leg and gave Schwieder the sign and we threw it over there and got the out. That was a beautiful play.”

Platte County improved to 10-1 in Blue Division play and forged a virtual tie at the top of the standings. The Pirates can earn at least a share of the conference title with a win Monday against Smithville, which enters play with two league losses but the chance to play spoiler for more than one team.

Having held the advantage thanks to early wins over Platte County and Smithville, Kearney has now lost its lead and also has a game left with the Warriors, meaning a three-way tie could still be in play. Platte County and Kearney also have paths to outright titles under the right scenario.

Platte County could also wrap up the No. 1 seed in Class 5 District 8 with a win over Smithville. The Pirates’ 5-2 loss to Grain Valley, which plated three runs against Fulk in the top of the first and didn’t look back, only ended a winning streak and changed little else.

Just three games remain on Platte County’s regular season schedule, while Kearney and Smithville — the other two teams likely competing for the district’s top seed — have a much more full final two weeks before the start of the postseason. The Pirates have won 12 of their last 15 and will look to keep the momentum going before the start of district play.

“The bats are hot; defense is solid,” Knudsen said. “Really tightening it up. We have a lot of really good chemistry going right now so we’re just kind of on a roll.”