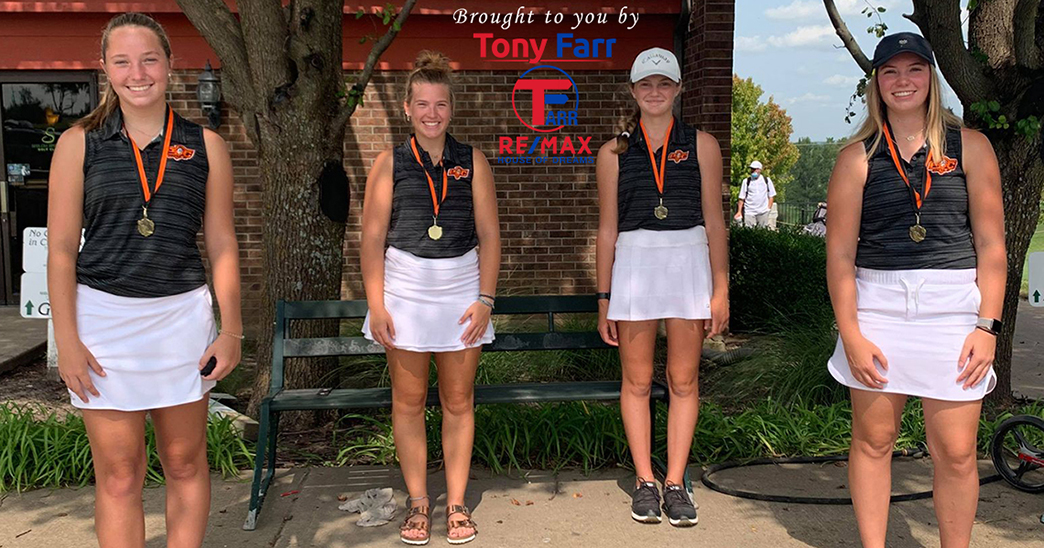 Platte County won a tournament title for the third time this season and made the wait worth this one. The Pirates dominated a pared down field in Wednesday’s Platte County Invitational — rescheduled due to an inclement weather postponement on August 31 — to win their home tournament for the second time in three years.

Platte County shot 368 — one shot off the season-low 367 posted last week in St. Joseph — and easily won the team title. Kearney was the runnerup with a 419, while third-place Smithville came in at 428. More impressively, when the scores were totaled, the Pirates had the top four individual finishers, starting with junior Eden Shipp.

“It means a lot (to win); we haven’t had our best this year, and we have all been struggling,” said Shipp, who earned medalist honors with an 87 on the par-71 setup. “To come out and win at our home course, it makes me feel better.”

Platte County senior Mannon Bigus was the runner-up with a 93, while sophomore Bailey Silcott and senior Victoria Sanders each shot 94 to finish in a tie for third. While Shipp and Silcott entered the season as returning Class 2 sectional qualifiers, the Pirates have shown depth all season with multiple players taking turns leading the team’s scoring.

The win Wednesday followed victories in the season-opening Ray-Pec Scramble and St. Joseph Central Invitational last week. The key has been the consistency in spots one through four, as this marked the third time Platte County finished with four medalists.

“I know last year not all the girls could shoot around the same score, but this year, it is pretty good for us,” Silcott said. “We have won a few of our tournaments this season, so it’s good.”

While the postseason looms just around the corner, Platte County and the rest of the state won’t find out the new classifications — Missouri goes from two classes to four for 2020 — until next week. The Pirates will continue to have big goals and return to action Monday in the Oak Park Invitational at Paradise Pointe Golf Complex in Smithville with the Suburban Conference Blue Division Championships and district play slated for Monday, October 5 and Monday, October 12.

The Pirates were dominant in a triangular Tuesday at Tiffany Greens Golf Course with a tightly bunched set of scores.

Shipp took medalist honors with a 41, while Bigus was just one shot back. Sanders had a 46, while Sanders rounded out the counting scores with a 47. Madison Boos, a senior, posted a 49.

“We have been moving some players in and out of the lineup to find just the right combination to put the team in position for success,” Short said. “It also gives players the opportunity to get some rounds in and showcase their talents.”

After two tournament victories to start the year, Platte County was eighth out of 16 teams at a difficult Winterstone Golf Course on Monday.

Shipp topped the Pirates’ finishers in a tie for 4th place with a 92 on the par-72 setup, while Silcott was tied for 17th with a 93. Incidentally, both players had seen this course before after playing on it in last year’s Class 2 Sectional 4 competition.

Short didn’t have a problem with the finish among a group of mostly larger schools.

“(Shipp and Silcott) had some first hand knowledge of the course,” he said. “This was the first time seeing the course for the other three ladies. I am actually pleased with the position that we finished today. The other schools above us in the rankings are bigger schools that should be in a different class when the new districts and classes are released.”