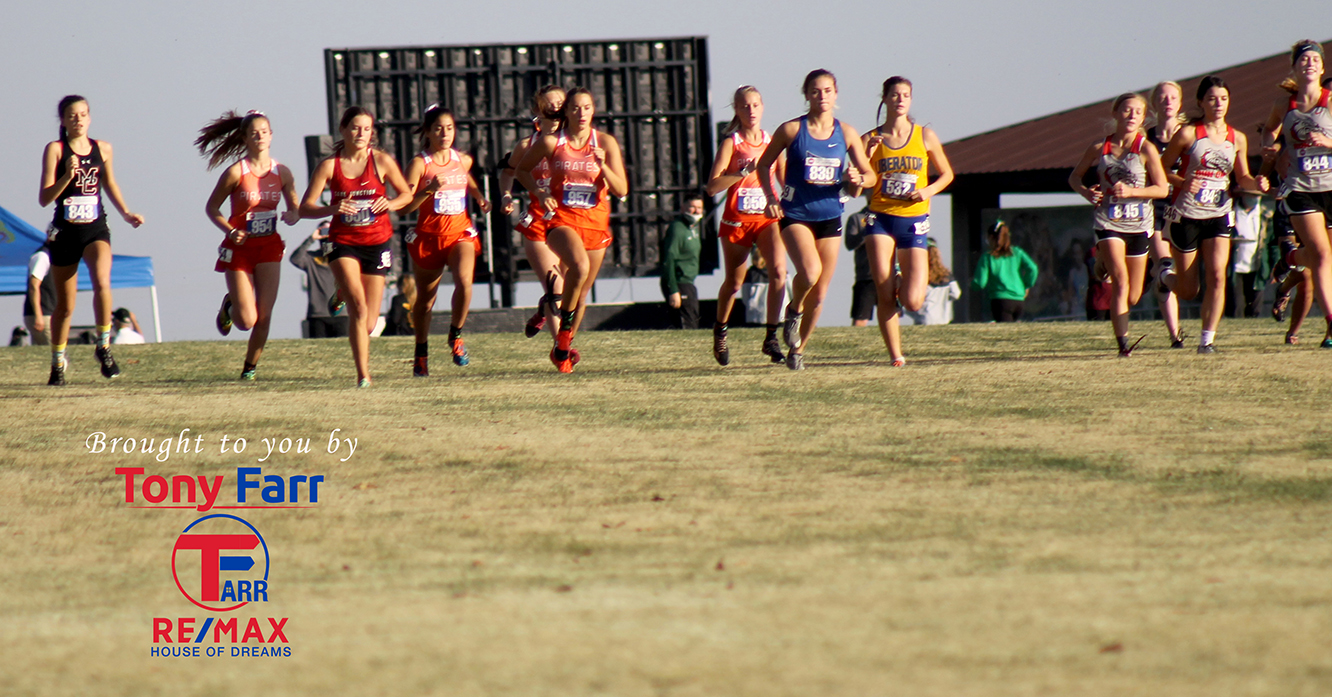 COLUMBIA, Mo. — Platte County accomplished identical eighth-place finishes in the team standings in the Class 4 Missouri State High School Cross Country Championships on Friday at the Gans Creek Cross Country Course. Somehow, the equal footing seemed fitting for the boys and girls who endured one of the most unique cross country seasons imaginable.

Each team made a long-awaited return to the state meet, the girls for the first time since 2010 and the boys since 2013 — both coming in Class 3.

Now, competing in the second largest class after Missouri went to five tiers this season, Platte County coach Chris Stubbs provided over his final state meet with two teams that took different paths. The Pirates’ boys won the Class 4 District 8 title with a reconfigured lineup minus any state returners and packed at the back with unknown commodities, while the girls placed third in a top-heavy district but qualified five individuals to earn the right to compete as a team in an unconventional and in some ways remarkable manner.

“I would say that was amazing; that’s all I can say,” Stubbs remarked afterward. “We are so blessed. We have the best coaches, the best team; I couldn’t ask for a better last year. It was awesome. I’d say at the beginning of the year, let’s try to get to state because we know we can. It is rewarding that we got here.”

Platte County didn’t have any all-state runners with senior Maddie Klippenstein (42nd) leading the girls and individual district champion Blake Bjustrom (35th) the leader for the boys. The balanced showings to finish in the middle of the team packs were representative of how the Pirates ran all year.

All 12 runners were first-time state qualifiers.

Klippenstein enjoyed a triumphant finish to her career, running 20 minutes, 18.8 seconds on a fast course to finish just outside the top-25 and all-state distinction. She failed to qualify for sectionals in the old postseason format while battling pneumonia for the postseason and struggled with an injury early in the season.

However, Klippenstein came on strong at the end of the year, as the clear leader of a team that also included senior state qualifiers Jenna Jurgensmeyer (49th) and Ryanne Rhude (103rd). The Pirates also received strong showings from instant-impact freshman Carmen Gentilia (46th to finish in between her senior teammates) and Lydia Doole (67th).

Platte County had the fewest number of runners of any of the 17 teams in the standings but placed better than nine teams, seven of which had the luxury of bringing all seven runners as automatic qualifiers. The  Platte County finished with 223 points and came in behind Smithville (fourth) and Kearney (seventh), giving the Suburban Conference Blue Division three of the top teams in the state. Those were the same two teams that finished ahead of the Pirates in the Class 4 District 8 meet the week prior.

“They had a great race and a great day,” Stubbs said. “We didn’t get the medal we wanted, but I felt like we had a great season.”

Just 5 seconds separated Klippenstein from Jurgensmeyer with Doole just back of that pack. Rhude came up with the key finish in the Class 4 District 8 race six days earlier, claiming the final state spot — not bad for a runner convinced to give up volleyball for cross country and who dealt with her own injury and quarantine complications from the offseason to the season.

“It was very emotional,” Rhude said of her final race. “It was weird at the beginning (of the season) that could be our last race every single race.

“My entire life would be completely different (without cross country),” she added.

Stubbs noted the leadership and experience of this senior class, which also included former state qualifier in Taylor Giger, who battled injuries this year.

“They are great runners, but they are better people; phenomenal people,” he said. “I think they are kids that will go really far in life. This is just a little piece of history they are making right now, but they got bigger things to do in life.”

On the boys side, Platte County finished with a team total of 193 points, moving up from 10th at one point but a spot below the Pirates’ peak of seventh at the 4K split.

Bjustrom finished in 17:10.8, surging up four spots in the final two kilometers. His season included a pair of individual victories and a Class 4 District 8 championship — the first individual title for a Pirates runner since Brandon McCammon in 2003.

While seeking a state spot, Bjustrom enjoyed the state experience for himself and the team he cherishes.

“I feel like we did as good as good as we could’ve,” Bjustrom said of the team finish. “It has been a really long season and really taxing with a lot of hard workouts and a lot of miles. We weren’t burned out; we gave it everything we had. That is all you can ask for in this situation.

“We had more success than we ever could imagine this season. It was a very fun season and these guys are great to run with. I couldn’t imagine a better team to run with and lead; it’s been a lot of fun.”

Platte County entered the season minus state qualifier Matthew Sullivan, and behind Bjustrom was a pack of mostly inexperienced runners. And those runners were small in numbers.

Stubbs eventually pieced together the framework of a squad that developed into the top team in the Suburban Conference Blue Division Championships before a coaching error led to the Pirates’ disqualification. They made amends a few weeks later with the district title, topping conference rivals Kearney and Smithville in the process.

Platte County junior Andrew Early became the consistent No. 2 in the lineup, and he kept pace — as he has done most of the season — with Bjustrom much of the way before coming in 56th (17:29.4).

“It was tough at the beginning of the race, I did kind of get boxed in a little bit,” Early said. “You just gotta go with it and try to stay with the pack.”

The biggest performance of the day came from Platte County freshman Andrew Johnson, who broke 18 minutes for the first time in his budding career to take 68th. Andrew Plymell, the only other senior in the top seven, came in 80th, while junior Jace Trimble finished just 2 seconds behind him at 83rd as the last runner to factor in the team score.

Platte County junior Anthony Talley (103rd) and sophomore Aspyn Nelson (110th) were the other runners for Platte County. Nelson reached state as a replacement for sophomore Kage Audas, who was quarantined for districts and unable to take his usual spot in the top seven.

“The boys kept surprising people all the time,” Stubbs said. “We got a district championship and we get here and we are top eight. We weren’t sure we would have a complete team at the start of the season and to see the progress they have made in three months in phenomenal.”