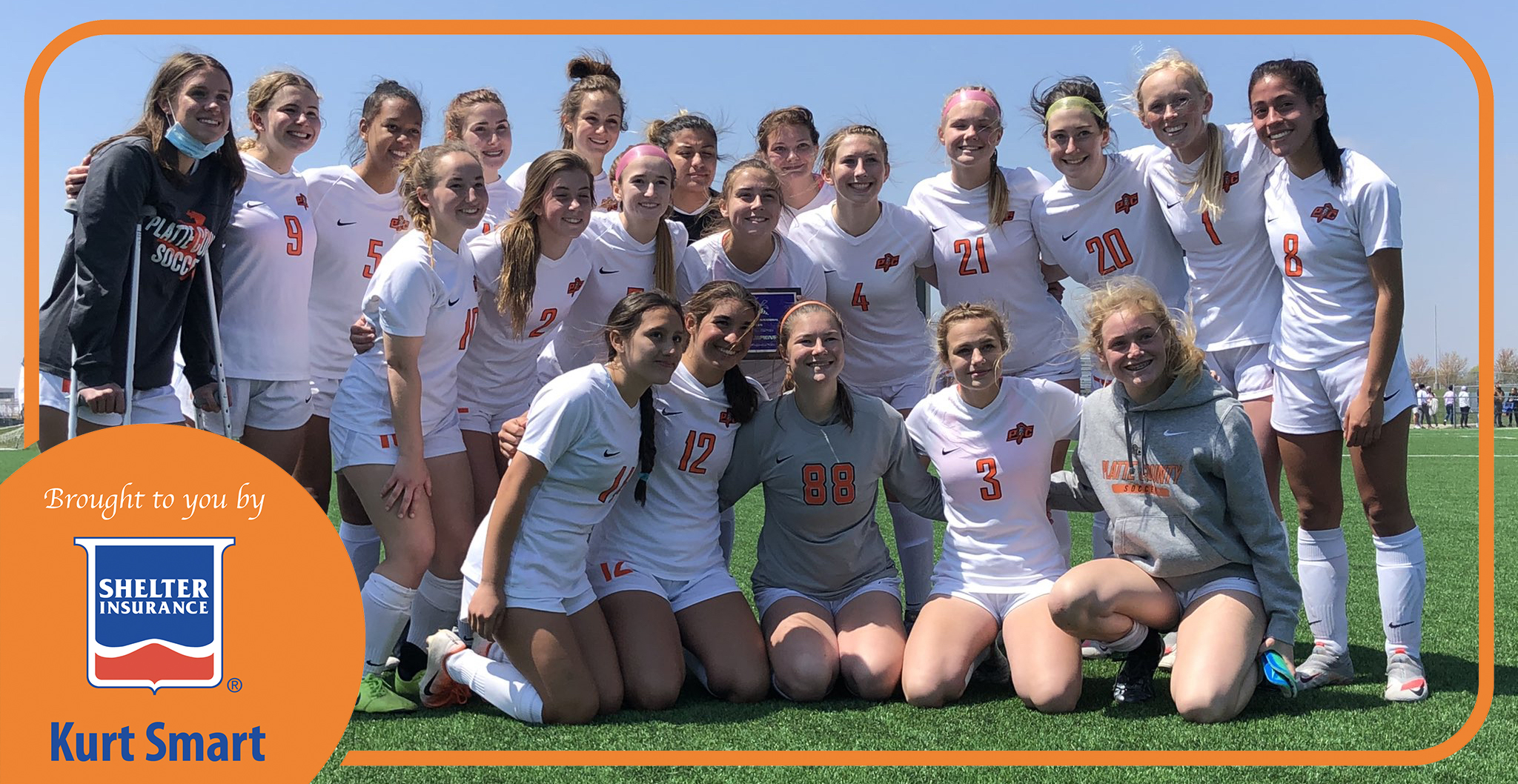 An early goal stood up in the championship game of the North Kansas City Invitational against the hosts over the weekend.

Platte County junior Riley Smith continued her prolific scoring season with a marker in the 22nd minute, and senior goalkeepers Grace Neece and Avery Krahenbill combined on a clean sheet in a 1-0 victory Saturday morning at North Kansas City District Soccer Complex at Staley High School. The Pirates (13-1) have now won 12 straight since a loss in the season-opening Platte County Invitational back in March.

Smith has scored in all but three games, including the loss to Staley and a 1-o win over Smithville.

“It was really good,” Smith said of winning a title after coming in third at the Pirates’ home tournament earlier this year. “I’m really proud of our team. We have really proved ourselves all season and have gotten better. We have earned everything we have gotten. The passes were amazing; (the shot) just happened to go in, but it wasn’t luck. We played so good. We are so strong together. I’m really proud of us.”

Platte County finished with 23 shots total but couldn’t get another one in the back of the net against North Kansas City (10-4). Meanwhile, Neece had one save and Krahenbill had two, stopping the limited chances in the Pirates’ 11th shutout of the season.

Wind gusts at more than 20 miles per hour caused most shots to drifted after contact.

“I’m not going for a catch with wind like this,” Krahenbill said of her strategy.

North Kansas City had the wind in its favor in the second half but both shots against Krahenbill were turned away.

The score marked the third 1-0 victory of the season and was the second straight 1-0 win in the title game of the North Kansas City Invitational. In the spring of 2019, Platte County beat Smithville 1-0 to take first in the most recent edition of the tournament.

“We had a few things we talked about at half and we fixed it,” Platte County coach Ashlyn Brantley said. “Going into the wind, the long balls and punt outs were giving us a little trouble. Our backs have really good communication and our keeper was solid. We talked at half when it was 1-0 that they are still in the game and we have to go out and fight until the very end.”

The Pirates turned a 2-0 lead at halftime into a blowout win on Friday, April 23, in an NKC Invitational semifinal.

Smith recorded a hat trick — on only four shots on goal — and added two assists, which both came in the first half. She provided the helpers on goals for senior center back Ryanne Rhude in the 30th minute and junior forward Aleah Dixon in the 32nd minute.

Smith scored on an indirect kick in the 43rd minute, the first of her three second-half goals. She added her second in the 51st and the final one in the 56th minute.

Platte County junior Hannah Stone earned the assist on Smith’s second goal, while a punt from Krahenbill led to her third. Stone, sophomore forward Sloan Kassen and junior Triton Davey had the other goals for this Pirates in the second half, and freshmen Addison Bradley and Carmen Gentilia added assists.

The Pirates scored the final four goals to overcome a rare deficit in the opening game of the tournament Thursday.

Platte County allowed a goal for just the fourth time this season, and Harrisonville’s 1-0 lead before halftime marked just the second time the Pirates have trailed and the first since the 2-0 loss to Staley. They had gone nearly 800 minutes of game play since allowing a goal in the run of play.

The previous one came early in the second half against Staley, and Blue Springs’ lone goal came on a penalty kick. The Pirates have shut out 10 of the other 11 opponents during the current winning streak.

Smith recorded another hat trick in the victory against Harrisonville, which fell to 1-5-2 against Platte County dating back to 2010.

After allowing the opening goal in the 15th minute, Platte County tied the score with 5 minutes left before halftime with Smith converting on a pass from senior midfielder Allie Corbin. Smith gave the Pirates the lead for good in the 45th minute, hammering in a rebound off of Stone’s shot on goal.

Smith finished her hat trick with a penalty kick in the 58th minute, and Corbin added her third goal in three games in the 75th minute on a cross from junior Haley Brunner.

This marked Platte County’s 24th straight win against Grandview since 2009 and the 24 straight shutout of the Bulldogs. Gentilia had a hat trick in the mercy-rule shortened game with the Pirates scoring 11 times in the first half on 17 total shots.

After the first 10 minutes, Platte County led 4-0 on on a pair of goals from Kassen with Brunner and Rhude also scoring. Brunner’s second goal came in the 14th minute. Corbin and freshman Mackenzie Shields then found the back of the net, and Gentilia scored three goals in a 15-minute span to close the first half — 23rd, 33rd and 37th.

A goal from Platte County senior midfielder Kylene Loy in the 32nd minute broke up the scoring spree for Gentilia. Shields had two assists, while Loy, Corbin and senior center back Emma Murray had one assist each.

Grandview didn’t have a shot on goal.