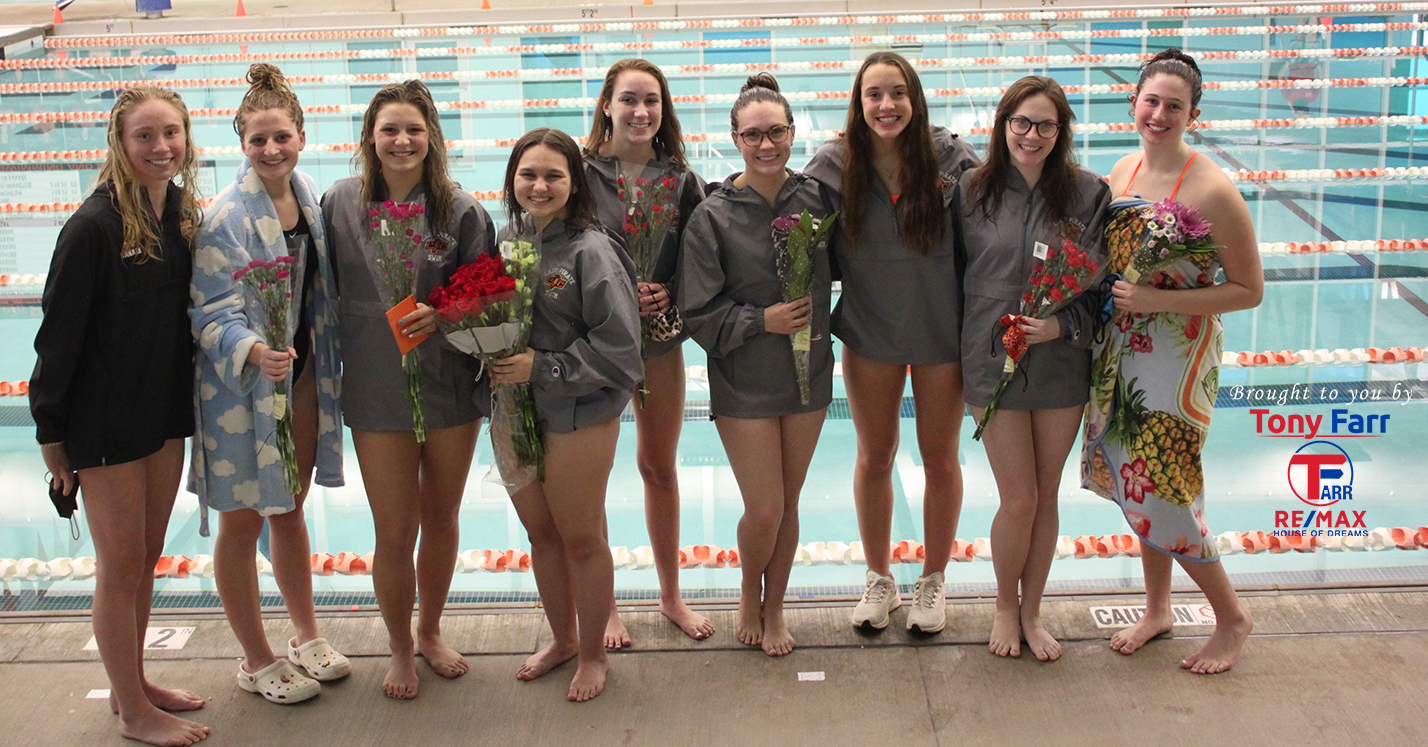 The first race of a dual against St. Pius X provided an opportune time for Platte County coach Marnie Jenkins to showcase the depth on her roster — especially with the eight healthy swimmers available making up a pair of 200-yard medley relay team. The Pirates posted a 1-2 finish in the event with eight seniors comprising the two quartets.

Smithville and Kearney were also slated to compete Tuesday at Platte County Community Center North there but pulled out a day earlier.

The eight Platte County seniors, along with the injured Maddie Klippenstein (back), were honored after the fourth event. Pirates assistant coach Doug DeLay served as emcee of the festivities, which took some time to rattle off the accomplishments and background for the most accomplished class in program history.

“Is it totally crazy; we were just discussing how unusual it is to have a strong group of swimmers stay with it all four years,” Jenkins said. “I’m very fortunate. This is a really special group of seniors. There is nine of them, and we filled up the whole side (of the pool). I think it says a lot about the camaraderie with this team and they say it over and over, but we are a family. It is a really close-knit group.

“It is bittersweet. I was tearing up the entire time (during the ceremony). This is a special group. I try not to think about it yet … I’m trying to enjoy it.”

Jenkins did that when this group came in as freshmen she didn’t expect this many to make it all four years as attrition over the years usually lowers the number. Nichols recalls senior ceremonies being much shorter in past years. There were two seniors her freshman and junior season and only one as a sophomore.

“I feel the nine of us have gotten closer the past four years,” Nichols said. “It has really meant a lot to have everyone introduced. It was really sentimental. It shows our coaches are doing something right. We brought on Doug a couple years ago, and he is a great asset to this team. The morale is always high, and we have become a family these four years. That is why many people have stuck around.”

Platte County’s record board high on the wall of the YMCA appropriately displays the accomplishments of the 2021 class, headlined by Banark — a signee to Division I South Dakota. She owns all but two individual swimming records at this point after recently breaking Klippenstein’s mark in the 100 breaststroke.

Banark also swam on all three school-record-holding relays along with Klippenstein (200 medley and 400 freestyle) and Zimmerman (200 freestyle). Add in the success of sophomore Drew DeLay, who owns the 500 freestyle record and swam a leg on each of the record relays, and the only records not involving a current team member are diving.

Jenkins noted she asked Banark if she wanted to try the 500 freestyle and sweep the board before she finishes her career as the best Platte County swimming and diving athlete ever.

“I’m not a distance swimmer and I don’t plan on diving, so I will stick with what I have,” Banark said.

Banark currently has an auto or consideration cut for the Class 1 Missouri State Swimming and Diving Championships in all 10 swimming events outside of the 500. Platte County seeks a third straight Suburban Conference Blue Division Championship and an improvement on last year’s 16th-place state finish.

“That is phenomenal,” Jenkins said of Banark’s bevy of accomplishments over her four years. “She is a remarkable girl, and I’m happy to see she will continue her swimming career. She loves it and needs to continue it.”

In the senior night dual, Banark won the 50-yard freestyle (25.26), posting a team-best time in the process, and 100-yard breaststroke (1:08.76) in her individual events and was part of Platte County’s winning 200 medley relay and 400 freestyle relay, where she joined DeLay, junior Meredith Ballou and freshman Brooklynn Hays on a team that won in 4:03.24 — a new season-best state consideration time. The mark represented a 41-second margin of victory over Platte County ‘C’ team of sophomores Blair Bolling, Macy Brown, Meredith Johnson and Lauren Beatty.

Ballou won the 200 freestyle in 2:14.31, as the Pirates finished first through seventh in the event. Nichols was the runner-up, while Beatty and Bolling tied for third. Ballou added another win in the 100-yard butterfly (1:08.91), joining Banark as the only swimmer with multiple individual victories on the day.

Zimmerman and Nichols tied for first place in the 100 freestyle in 1:04.55, while freshman Jayden Benninghoff took third, 1 seconds behind. Benninghoff won the 100-yard backstroke later in the day, followed by teammates Kunz and Jonkman.

Zimmerman, Kunz, Klopfer and Wisniewski won the 200-yard freestyle — another all-senior quartet — with a time of 1:59.47. Ballou, Nix, Nichols and junior Erian Stone finished second in the race.

“It means a lot to me that I actually got that record last year,” said Zimmerman, who was part of the 200-yard freestyle relay school record that was set last year with Banark, DeLay and the since-graduated Lindsey Swindler. “I got really fast, and I never expected my name to be up there at all, let alone breaking two records in the same day. It was super cool. I have my name up there, and I realize it may not be up there for the longest time, but I’m glad it’s up there now.”

Platte County finished with 187 points, one behind St. Teresa’s Academy. Park Hill South won with 412 points, while Park Hill was second with 202.

DeLay and Hays finished second and third in the 100-yard breaststroke, while Ballou came in fifth in a state consideration time of 1:16.97. Hays’ third-place time of 1:11.54 was a season-best, as well.