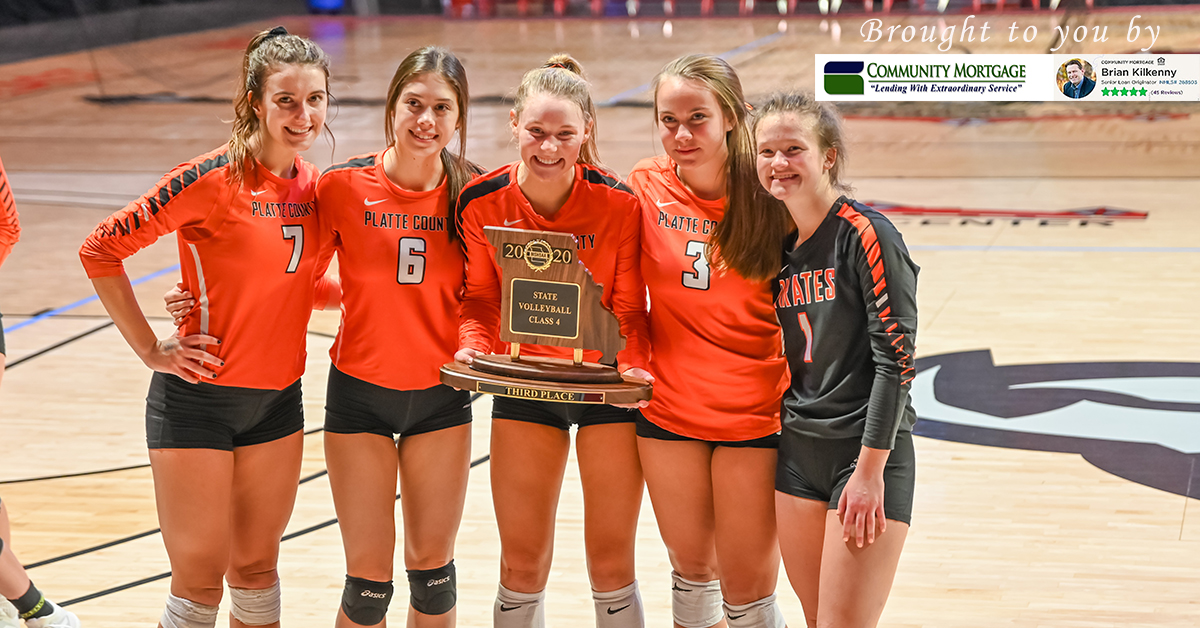 CAPE GIRARDEAU, Mo. — Platte County made an almost immediate bounceback from heartbreak and ended one of the best season’s in program history on the highest note possible. After a five-set loss to Parkway West in the Class 4 state semifinals, the Pirates turned right around and swept Nerinx Hall 25-21, 25-18 and 25-19 on Thursday evening  at the Show-Me Center on the campus of Southeast Missouri State University.

“The semifinal game was very hard, very difficult,” said Anderson, who shared the team lead in digs with Presli Firkins at 14 in the third-place game. “It didn’t turn how we wanted but I’m very happy how we played in our last game.”

Against Nerinx Hall (11-5), trailed in both the first and third sets but rallied both times in what could have been an exhausting day. The Pirates were one set away from playing in the Class 4 championship against Willard before Parkway West rallied to win the final two sets of the semifinal less than 30 minutes prior to the start of the third-place game.

“I know it was tough for those girls to play that game, and it was even hard to coach it,” Platte County coach Katlyn Donovan said of the third-place game. “Sending those seniors off on a high note and a trophy and third-place medal, we can’t be more proud of how the girls fought for that senior class. They did everything they needed to do to get them that victory.”

Platte County fell behind 4-1 in the first set against Nerinx Hall, perhaps a little hangover left over after losing in only its second five-set match this year. The other was a 3-2 loss to Liberty late in the season that halted a 22-match unbeaten streak. The Pirates rallied to tie it at 5-5 on a kill from junior Mary Grace Hunter, and the teams were competitive through a tie at 16-16.

A kill from Platte County junior Kate Brown, one of her team-high 11 in the match, broke the tie for the final time and started a 4-0 run. Nerinx Hall fought set point twice, but a third chance resulted in a win for the Pirates.

Platte County never trailed in the second set but didn’t have more than a three-point advantage until the end, scoring the final four points in a row.

Firkins sparked the surge in the third set, taking over serving with the team down 5-2 and by the time the run ended, Platte County led 11-5. Later, a 4-0 run with kills from Luna, Anderson and an ace from Hunter gave the Pirates a commanding 18-10 lead.

Nerinx Hall never pulled closer than five points after that.

“We fought very hard and I’m glad to say we finished third; that is quite the accomplishment,” said Luna, who played her final volleyball match as her future in college will be focusing on track and field at Northwest Missouri State. “I’m so happy to be part of this team.”

In the final match of the season, McGehe had 12 digs, seven kills and seven assists, while Kate Brown had 11 kills and eight digs. Pirates junior setter Emerson Walter had a team-high 16 assists

Platte County finished at 28-7-2 — incidentally matching the win total from each of the past two seasons. The season started with the Pirates shorthanded in two four-set losses, one to undefeated Class 5 state champion Liberty North, and they were 3-6 overall following a rough trip to the Lansing Tournament in early September.

From there, Platte County went 22 matches without another loss and captured two tournament titles. The Pirates then bounced back from the tough loss to Liberty to clip Kearney in the Class 4 District 16 final before topping Pembroke Hill and Grain Valley in the playoffs to reach state for the first time.

Platte County last won a district title in 2014, while in the largest of four classifications, and had just two playoff wins in program history before last Saturday’s back-to-back victories. The Pirates found a new path in the playoffs when the state expanded to five classes for this season, and they remained in Class 4.

“I know it kinda stinks we lost the semifinal match, but to end the season with a win, only two teams in Class 4 get to have that is an honor within itself,” Donovan said. “We are really proud of the girls.”

The first three sets between the Pirates and Longhorns (12-4) were competitive and oftentimes proceeding on a point-to-point basis.

Parkway West rallied back to take a 25-27, 25-19, 23-25, 25-18, 15-12 victory in the semifinal earlier on Thursday afternoon. Platte County went to five sets for just the second time this season, and both times, the Pirates were unable to win the decisive race to 15 in the fifth set.

Unlike the earlier loss to Liberty, there was no chance to regroup and chase state championship dreams after Parkway West came out on top in an emotional match for both teams.

“I was in tears after that,” Anderson said of the marathon match. “It was five set.s Very tiring … my legs are shot.”

Platte County and Parkway played for nearly an hour longer than the other match that started at 1:30 p.m. Willard made quick work of Nerinx Hall, 3-0, and both teams had a chance to see who they would play next.

Falling behind by two points twice late in the opening set, Platte County staved off set points 24-22 and 24-23 on a kill from Luna and a service error. Parkway West then survived a first set point before the Pirates won the final two points off Longhorns errors to take an opening set that featured 14 ties and nine lead changes in the opening set.

The second set featured nine ties and one lead change and that came at 17-16, when a kill from Parkway West’s Carly Kuehl gave the Longhorns the advantage. The kill started a 5-0 run that Platte County couldn’t recover from and a kill from Maddy Turka ended the set at 25-19.

Platte County overcame a pair of four-point deficits in the third set — first at 13-9 — that turned into a 15-13 lead behind the serving of Firkins. McGehe had two kills during the run, while Kate Brown added one.

Parkway West then took a 21-17 lead, which led to a timeout from Donovan. The chat worked and the Pirates rattled off the next four to tie the match with Anderson and sophomore Karsyn Stehlik sparking the surge with kills. The Longhorns took their final lead behind kills from Kuehl, who had 25 in the match, and Anna Plavlisin, who had a match-high 30, to go ahead 23-21.

With junior Emerson Walter serving, Platte County scored the last three points of the set and took a 2-1 lead.

“It was point-for-point, and it was really close,” Luna said of the contest.

Parkway West dominated the next two sets to move into the finals.

In an oddity, compared to the first three sets, the fourth and fifth sets didn’t have any ties or lead changes. Parkway West jumped ahead 3-0 in the fourth set and held off a few rallies. Platte County, once down 16-8, pulled within 17-16 but didn’t lead.

A key moment in the fourth set came on what appeared to be a kill for Anderson, who finished with 14. The officials initially gave the Pirates the point, but then talked and said the kill hit the antenna on the net and didn’t count.

Instead of being down 20-19, Platte County’s deficit grew to 21-18, and the Pirates didn’t score again in the set.

Parkway West went ahead 4-0 in the deciding set and had control most of the way, but the Pirates pulled with 8-7 after a return error by Parkway West. Irene Yannakakis then recorded a kill for the Longhorns and the lead stretched to 11-7.

Platte County staved off two straight points, first with a kill from Brown and then when Truka was called for touching the net.

Down 14-12, the match and semifinal ended with a kill from Kuehl. Platte County finished with 53 kills and used a balanced attack led by Brown (15), while Anderson and McGehe (13) also finished in double figures. Walter dished out 24 assists.

Five different players had 10 or more digs for Platte County, while seven accomplished that feat for the Longhorns. Firkins and Pavlisin each had 26.