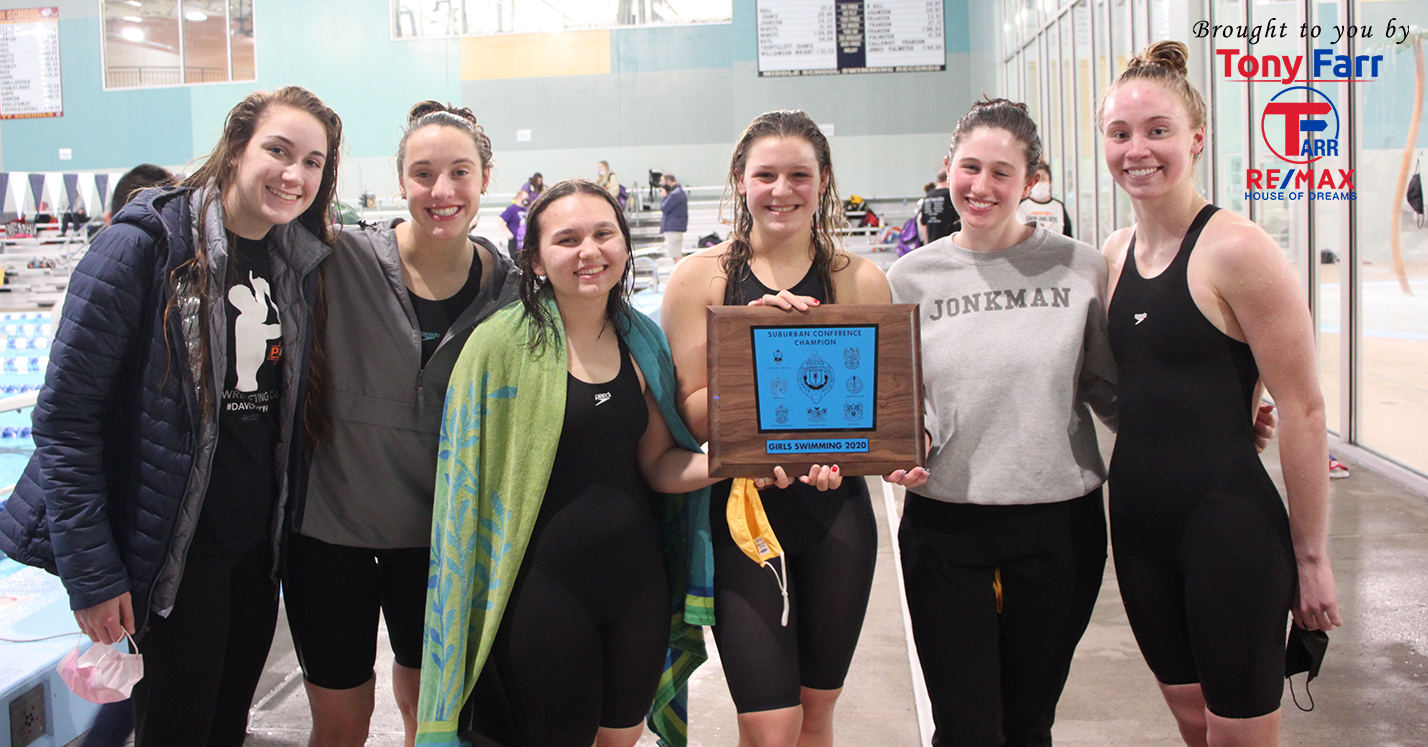 For the third year in a row, Platte County claimed the Suburban Conference Blue Division title — this time surviving weather-delayed finals with two school-record-setting relays, the return of senior Maddie Klippenstein and a final dominant showing from senior Shannon Banark. The Pirates totaled 538 points and finished more than 150 clear of runnerup Kearney.

Platte County captured four individual conference titles Tuesday at Gladstone Community Center and might have had another if not for a disqualification. The finals were originally set for Saturday, but weather forced a postponement.

“It couldn’t have happened any other way,” Platte County coach Marnie Jenkins said of the seniors collecting a previously unprecedented third straight Blue Division crown for program. “They deserve it and worked so hard and stuck together. I think I lost only one senior from the time they were freshman, so it is pretty cool. “We had lot of top-eight finishes and lot of first places, lots of first through fourth. It was fun.”

Klippenstein, who had been out with a back injury, swam in only her second meet of the season but managed to post an automatic qualifying time for the Class 1 Missouri State Swimming and Diving Championships in the 100-yard breaststroke at 1 minute, 9.48 seconds in the finals — 0.31 faster than her preliminary time that seeded her third in the event.

Klippenstein finished as the Blue Division runnerup, coming in behind teammate Shannon Banark, who set the school record in the event for a third straight meet. She finished with the new program-best time of 1:06.26, having just recently unseated Klippenstein in the event a few weeks earlier before steadily lowering the mark.

Platte County had the first four finishers in the 100 breaststroke, and all four posted automatic state qualifying times. Drew DeLay, a sophomore, was third and just six-tenths of a second behind Klippenstein, while freshman Brooklynn Hays was fourth at 1:10.18.

“I honestly didn’t know if it would be something I could do this year,” Klippenstein said of becoming a four-time state qualifier for the state meet, which will be held Saturday, Feb. 20 in St. Peters. “I was really lucky that it was and I will get to go with three other girls in the breaststroke from our team, which hasn’t been done. It will be a blast and hopefully we are in the same heat.”

Banark factored into all four of Platte County’s individual victories. With Klippenstein limited to just the one event in her return from injury, Banark joined DeLay, junior Meredith Ballou and Hays on the Pirates’ conference championship 200-yard medley relay that won in 1:55.08 — after setting the school record in the prelims at 1:54.73. The previous mark was 1:55.29 set last season by Banark, DeLay, Klippenstein and graduated Lindsay Swindler.

Banark also swam the last leg of the Pirates’ victorious 400 freestyle relay that featured all seniors, including Nichols, Wisniewski and Sophia Zimmerman. The time of 4:01.21, a season-best improvement on the Pirates’ state consideration time.

On Wednesday, Platte County headed back to Gladstone for a “last-chance meet,” and the team of Hays, DeLay, Ballou and Banark broke the school record in the 400 freestyle by nearly 8 full seconds with a time of 3:48.26 – and punched an automatic bid to state in that event with a revamped look. The previous school record was 3:56.20, also set last year by DeLay, Klippenstein, Banark and Swindler.

Platte County had a litany of other top-four finishes dotted throughout the results and could’ve had another conference championship relay if had it not been for a disqualification for the 200 freestyle team. The Pirates had the fastest time coming out of the prelims from DeLay, Ballou, Zimmerman and Hays.

Nichols was the runner-up in the 200-freestyle, just ahead of Platte County teammate Blair Bolling. Ballou was second, followed by Wisniewski in third and Hailey Davis was fourth for the Pirates in the 100 butterfly.

Bolling added a runner-up finish in the 500 freestyle, while Ballou added another second in the 100 backstroke. In that race, Jayden Benninghoff was third and Erian Stone was fourth for the Pirates. Hays placed third in the 50 freestyle with DeLay in fourth.

Klippenstein would have strengthened depth for the relays and likely had another individual event if at full health, but Platte County’s margin of victory with her limited plus the DQ of the 200 freestyle relay team showed the true dominance of this year’s team.

“It is awesome to see my teammates and finally swim with them again,” Klippenstein said. “This meet was a blast, and we won conference again for the third time, which is crazy. We had a lot of girls that dropped time, and it was fun to be a part of that.”

Klippenstein has often turned into a cheerleader for her teammates in recent weeks as she worked to rehab her back injury, and on senior night, she was the only one of the nine for Platte County that didn’t compete in an event. She enjoyed her supporting role and built relationships with as many teammates as possible with the goal of returning to the pool if at all possible to chase more all-state honors.

“Her coming back made me very emotional,” Jenkins said of Klippenstein. “She is such a hard worker and a great team player. To see her able to come back and swim well, … we were all so nervous, but she came back. Then she had her best time. It is crazy. She’s always been one that can do it.”

Platte County achieved the first of its goals with the third Blue Division plaque secured. The Pirates now turn attention to an abridged Class 1 state meet with timed heats for finals and preliminaries as in past years due to COVID-19 protocols.

In each of the past three years, Platte County moved up the state standings with the current senior group building to last year’s 16th-place showing. The Pirates want to better that behind a full complement of relays plus Banark, Klippenstein, DeLay, Ballou, Hays and those that will fill out the state-bound relays.

The official state bids come out on Sunday, meaning Banark will have to decide on her individual events and relays while Platte County will know exactly how many individuals will be competing in St. Peters.