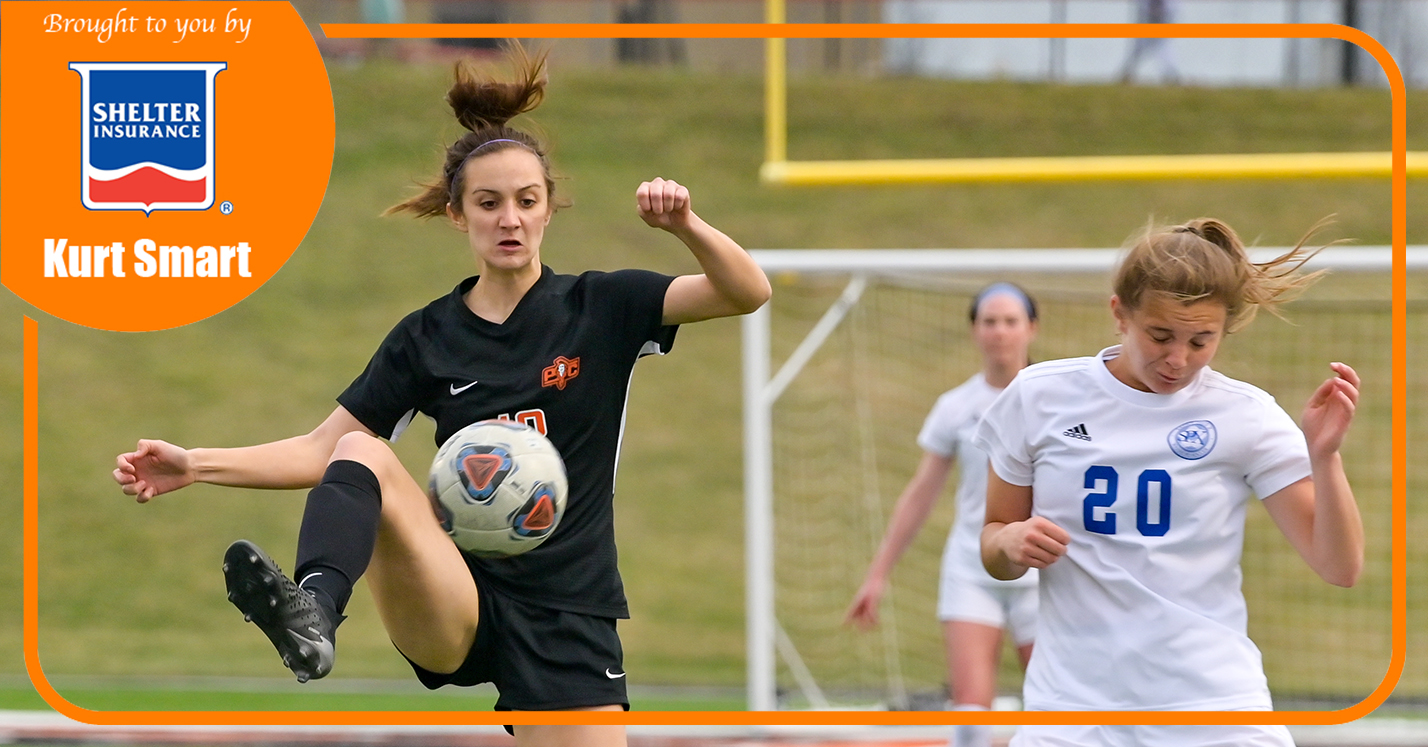 Platte County comes back for 3rd in home tournament

Platte County finally ended a losing skid against a Highway 92 rival in a big spot to open the season. A newcomer came up with the goal needed to end nearly a decade of frustrating.

Riley Smith, a junior midfielder, scored the only goal in a 1-0 victory over Kearney on Friday at Pirate Stadium in the third-place game of the season-opening Platte County Invitational. Smith’s second goal of her first season for the Pirates gave them their first win over the Bulldogs since 2011.

“It is new to me,” said Smith, an experienced club player committed to Division I Missouri State. “But it is not new; I play club. It is really good being around my teammates and people from my school; I love the environment and I just love playing with everyone. It is great.

“I love all the enthusiasm Platte County has. I love all my teammates. All of them are super supportive. Playing against Kearney, our rivals, is a great win.”

Platte County finished the first week of the season at 2-1 overall after dropping a pool match to eventual tournament runnerup Staley.

With 14 of the wins during the 19-game streak by multiple goals, Kearney went into halftime of the third-place game scoreless. Smith showed off her dynamic playmaking abilities midway through the second half, taking possession 35 yards out, dribbling past two defenders and firing a shot into the right side of the net.

That proved to be the only goal, although Platte County had a shot ricochet off the top of the crossbar in the 77th minute that nearly doubled the advantage. The Pirates dominated possession for much of the second half, limiting the chances for Kearney to put much pressure on senior goalkeeper Avery Krahenbill, who played the second half, while fellow senior Grace Neece started and shut out Kearney in the first 40 minutes.

“I think our whole team played all together,” Smith said. “The first game we did alright, and as we went on we started building together as a team. We started working together and playing. Today was a total team effort; it was not a one-person effort. I think we will have a good season, and we are excited since we just beat our rival.”

Grain Valley won the tournament championship over Staley, 5-2, while St. Pius X beat Pleasant Hill 2-0 for fifth place. Five of the six teams in this field were playoff qualifiers in 2019.

Platte County entered with very few returners from their most recent season in 2019 — COVID-19 wiped out last spring — but showed well in a tough field. Pirates senior center defenders Ryanne Rhude and Emma Murray anchored the lineup as two of the three starters back from two years ago.

“You want to be in the championship game in our tournament,” Brantley said. “I think today we definitely came out stronger and looked the best we had in this tournament. We came out with this win, and we are proud of that.”

The Falcons won the Pool A finale in a shutout Wednesday at Pirate Stadium, scoring on either side of the halftime whistle.

Platte County yielded goals with 9 seconds left in the first half and the first minute of the second half to account for all of the scoring. The Falcons have won three straight over the Pirates in this tournament.

The Pirates went up 3-0 in the first half and held on for the win in their tournament opener Monday at Pirate Stadium.

Smith scored her first career Platte County goal on a free kick in the 11th minute, and senior Kylene Loy doubled the lead in the 21st minute. Pirates junior forward Hannah Stone made it 3-0 in the 32nd minute on an assist from sophomore Sloan Kassen, an advantage that held until the closing minutes.

“We got some things to work on; this is still early on but we want to continue to move the ball,” Brantley said after the Kearney win. “We didn’t do that as well as we did in this game; this was our very best game to possess and move the ball around like we want to. It is good to have these games under our belt. Now we got the dust off from sitting out the whole year and the girls are ready for the rest of the season. We won’t have any easy matches. It will be work and we will be putting in work in practice and we look forward to what we have coming.”

Platte County plays Monday at St. Joseph Central, starting at 6:30 p.m before opening Suburban Conference Blue Division play Tuesday at Winnetonka. The Pirates will then finish another busy week with a home match Thursday, April 1 at Pirate Stadium with a chance to start a winning streak of their own.

“It is never a blowout and always going to be a tough match whether we meet home or away, and it could go either way depending on the year,” Brantley said of playing Kearney. “It always good to get a W against them but we will see them a few more times this season. We’ve got to make sure we are ready to go each time.”