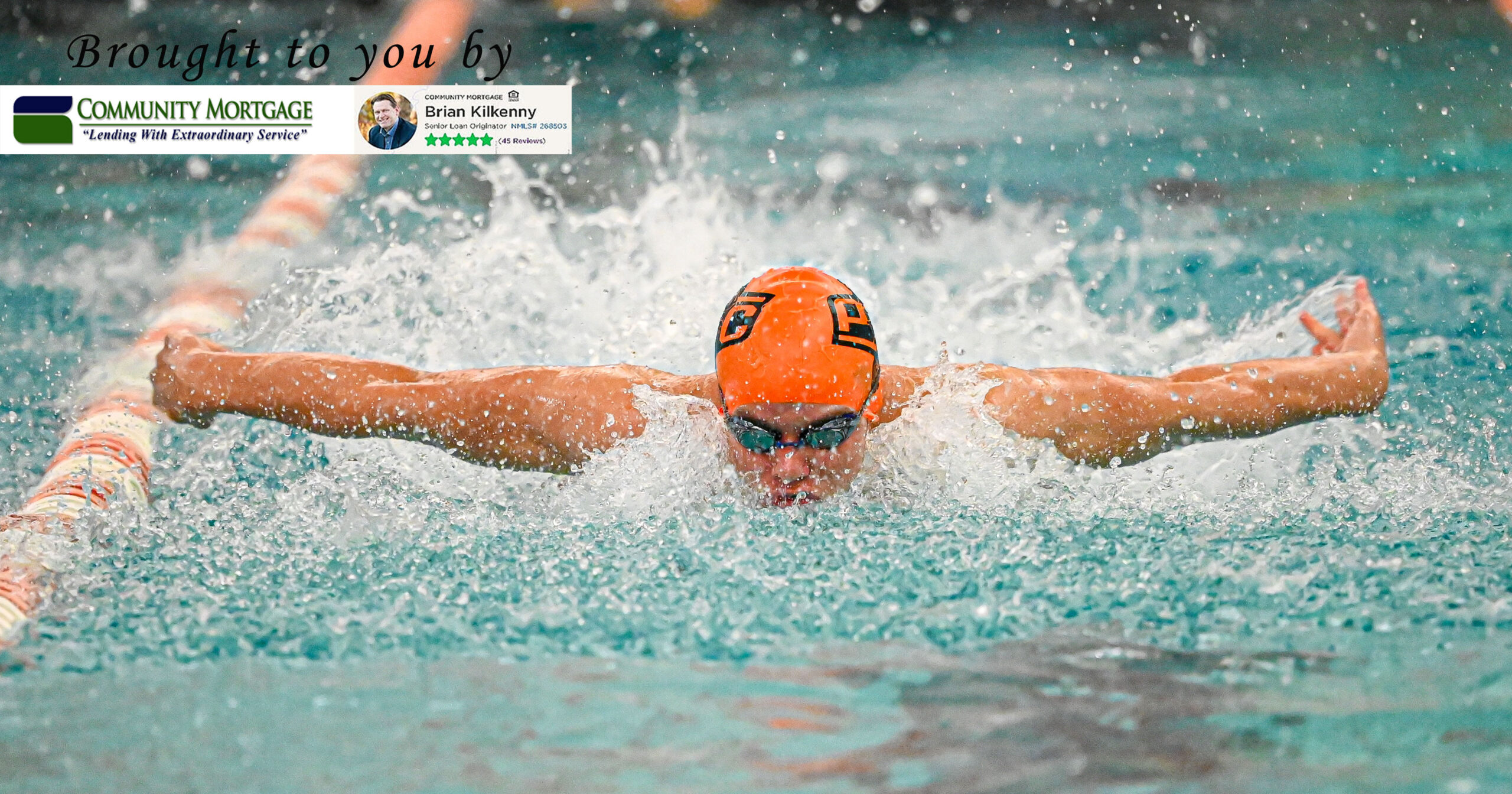 Platte County’s final home meet of the year ended with a convincing victory over three opponents in a quad Tuesday, Oct. 20 at the Platte County Community Center North. The Pirates had limited chances to compete at home due to COVID-related restrictions and alterations to the schedule but took the opportunity to honor four seniors, Ryan Dye, Luke Harms, Drake Lacina and Jacob Flynn.

Team scores were kept at the meet, although the emphasis remains on individual performances for these smaller competitions.

Platte County totaled 531 to top St. Joseph Central, Smithville and St. Pius X. Central was closest with 428 points. The Pirates used their depth to rack up points and only won two events but continue to chase automatic qualifying times for the Class 1 Missouri State Swimming and Diving Championships with no marks hit so far.

Gage Jonkman, a sophomore, claimed the 200-yard freestyle in 2:04.34 — bettering his seed time by a full second, while sophomore teammate Joey Croy was runner-up, 10 seconds behind Jonkman.

All three of Platte County’s relays finished second — the 200 medley team of Dye, Yocklin, sophomore Collin Burton and junior Dylan Bietz; the 200 freestyle team of Jonkman, Yocklin, junior Miles Bray and Flynn; and the 400 freestyle team of Burton, Dye, Flynn and Bietz were also runners-up. The Pirates had four third-place finishers: sophomore Austin Hough in the 200-yard IM; Burton in the 100-yard butterfly; Harms in the 500-yard freestyle and Bietz in the 100-yard backstroke.

Platte County next competes in the the Suburban Conference Blue Division Championships next Friday and Saturday, Oct. 30-31 at the Gladstone Community Center.

Platte County took third place as a team at the Smith-Cotton meet on Saturday, Oct. 17, behind a pair of Class 2 powers in Rockhurst and Columbia Rock Bridge. The Pirates had 284½ points and finished ahead of Columbia Hickman.

The highest finishes came from Bietz and Harms.

Bietz took second in the 50 freestyle in 23.35 seconds, while Harms was second in the 500 freestyle (5:39.42), a race where teammates Croy was fifth and sophomore Weston Grimes seventh. The Pirates’ 400 freestyle relay team of Burton, Jonkman, Bietz and Flynn placed third in 3:402.22.

Platte County also had a pair of fourth-place finishes. Dye took fourth in the 100 backstroke, the same event that Jonkman was eighth. In the 100 butterfly, Burton tied for fourth with Ben Ragsdell of Harrisonville. Each swimmer finished in 58.59145 seconds.

Platte County won the four-team quad at Belton on Wednesday, Oct. 14 by scoring 499 points and easily beating runner-up Belton, which finished with 341 points. Truman was third, followed by William Chrisman.

Platte County won nine of the 12 events, which includes diving where the Pirates haven’t had an entrant this season. The Pirates swept the relays, starting with the 200 medley in 1:54.39 made up of sophomores Carson Howe and Burton and juniors Yocklin and Bietz. The 200 freestyle team featured seniors Lacina, Harms and Flynn and junior Bray. They finished in 1:44.02.

Flynn picked up a win in the 200 freestyle (1:59.93), the second of four straight wins to open the meet for Platte County. Austin Hough, a sophomore, won the 200-individual medley, while sophomore teammate Ben Larson was the runner-up. The Pirates had another 1-2 finish in the 50 freestyle with Bietz winning in 23.59 and Burton second in 24.58.

Platte County freshman Brayden Carter was runnerup in the 500 freestyle, while Howe was second and Yocklin third in the 100 backstroke.

The Pirates went 1-1 during the Highway 92 Showdown against Kearney and Smithville on Friday, Oct. 9, likely providing a solid preview of the upcoming Blue Division championship meet.

Burton swam the first leg of the 400 freestyle relay that was second, followed by Jonkman, Flynn and Bietz. The team had a time of 3:53.16. The 200 relay team of Jonkman, Yocklin, Flynn and Lacina finished third.

Jonkman was the runner-up in the 100 backstroke, while Grimes was third in the 200 IM for the Pirates.