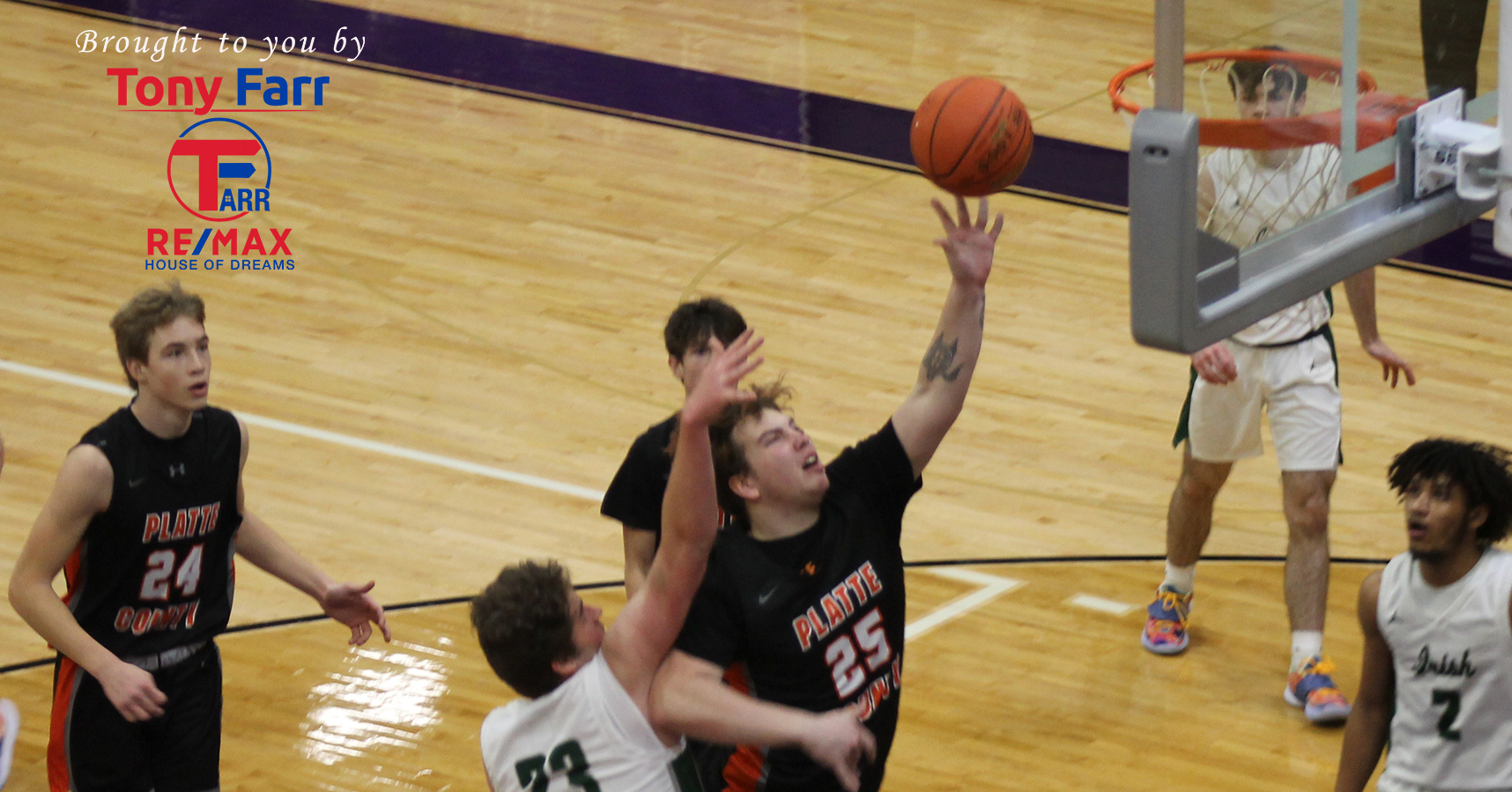 Platte County senior forward Dylan Montes goes up for a shot against Lafayette in the third-place game of the Bulldog Classic on Saturday in Kearney. CODY THORN/PC Preps Extra

KEARNEY, Mo. — Platte County went from cruising along in the third-place game of the Bulldog Classic to fighting until the very end Saturday at Kearney Fieldhouse.

Lafayette cut its deficit to a single point late in the fourth quarter, but the Pirates picked up a 66-60 victory. They prevailed for just the third time in the past 13 meetings with the Fighting Irish, former Midland Empire Conference rivals, and the last win was a 2015 district upset.

This one was even more important for Platte County, ranked No. 3 in Class 5 in the most recent Missouri Basketball Coaches Association poll. The Pirates improved to 10-1 and bounced back from its first loss of the season two days earlier to Blue Springs in the semifinals of the Bulldog Classic.

“You are happy you bounce back,” Platte County coach Rick Hodge said. “You are disappointed after the Blue Springs loss. We thought we had some things we should’ve done better and improve. We also felt that Lafayette would give us the same type of defensive pressure that Blue Springs did, and they do. They press you and rotate well and do a lot of good things. We were able to handle it better and I thought we learned from mistakes the other night.

“That is a very good ball team. They are very talented and we are happy to come around with a bounceback (win).”

The semifinals of the Bulldog Classic featured three teams ranked in Class 5. Lafayette came in at No. 9, while Kearney, which advanced to the title game and lost to Class 6 Blue Springs (9-2) in the title game.

The win was only the third in the past 13 games against the former Midland Empire Conference rivals. The last win was the 2015 district upset of Lafayette, a favorite to win the Class 4 title that year.

Platte County saw an 11-point lead dwindle down the stretch before hitting enough shots late to hold off the Irish. The Pirates went up by nine at halftime and kept that advantage through the fourth quarter.

Lafayette (7-5) cut the deficit down to six after a pair of free throws from Camden Bennett with 5 minutes, 40 seconds to go in regulation.

Platte County forward Joey Schultz scored a layup 9 seconds later and 8 second after that basket a steal from Pirates junior guard Jarett Mueller turned into another layup. He drew a foul and made the free throw, which made it 55-44.

That marked the largest lead of the game for the Pirates.

With 3½ minutes to play, Platte County’s lead sat at eight, but a layup from Bennett capped a quick five-point burst from Lafayette to make it a one-possession game at 58-55. Pirates junior guard Jace Trimble hit a free throw with 2:05 left to push the lead up one before Lafayette’s Mikey Thomas hit a 3-pointer to cut the deficit to one.

Schultz drew a foul only 5 seconds after that and hit both free throws, and with 1:05 left, Trimble scored to bump the lead to five.

“You don’t like to see that as a team, but for me as a player, playing in a closer game is more fun than beating a team by 10 or 15,” said Schultz, an all-tournament team pick along with Mueller. “Then free throws the rest of the game. It was definitely more of a fun game in the fourth quarter.”

Lafayette had a chance to cut back into the lead but missed a pair of free throws with just under a minute to play.

Lafayette only came within four after that on a pair of free throws from Bennett — who had a team-high 20 points — with 27.1 seconds left. Platte County hit 2 of 4 from the line in the final 26 seconds to salt away the win.

“It is a good bounceback tonight, a good way to come back and show we are still here,” Mueller said. “They are definitely a good team. They are scrappy. They hung around, and every time we would get up a little bit they would make a run and come back. It was a good to pull out a win … a good win.”

Platte County hit 10 of 15 free throws in the fourth quarter and made 23 of 34 overall. Mueller was 9-for-11 from the line and finished with a game-high 23 points to cap off his all-tournament team week.

Schultz finished with 16 points, the only other Platte County player in double figures.

“It is a very competitive tournament, and that is one of the reasons we come here,” Hodge said. “We came here at the right time of the season. We were having success against a lot of different teams. We saw three teams that pushed us. We needed that, and we got that. I think anything you can do to help our team grow, and I think we are still growing. We will go back to the film, and I think there are areas we still need to pick up on.”

Platte County will play three Suburban Conference Blue Division games this week, starting tonight with a home game against Winnetonka. The next two are against Highway 92 rivals, including a rescheduled game Wednesday at Kearney in a rematch of the Savannah Invitational title game in early December that the Pirates handily won.

To close the week, Platte County travels to Smithville on Friday.

The back-and-forth contest went down to the wire, but Blue Springs built a cushion in the fourth and never relinquished the lead in the final 8 minutes. The Wildcats held a 37-35 lead going into the fourth quarter and extended it when Kyle Bruce hit a jumper on the first possession.

Not out of yet, Platte County came right back with a 3-pointer from senior guard Alex McClure. A goaltending call on a shot by Brody Fulk and a layup by Joey Schultz cut the Blue Springs lead down to 49-47 with 4 minutes to play in regulation. The Pirates held possession with a chance to tie or go ahead twice but came up empty both times.

Over the next 2 minutes, Ike Ezeogu scored four points to help Blue Springs extend the lead back out – the latter after the Pirates cut the lead to 51-49 with 2:32 to play on the last basket for Fulk, who scored all seven of his points in the fourth quarter.

Platte County got to the line twice in the final 4.8 seconds but hit only two of the four shots, one each from Trimble and Schultz.

The fourth quarter lead wouldn’t have been possible without the scoring effort of Blue Springs’ Braden Appelhans, a guard who scored 13 of his 15 points in the third quarter to help the Wildcats overcome a 30-23 deficit. He kickstarted a 10-0 run, scoring eight straight points.

Platte County senior Jaden Burnett hit a 3-pointer to tie the game at the 1:27 mark of the third quarter, but a pair of free throws by Appelhans gave the Wildcats the lead for the final time.

Trailing 20-19 at halftime, Platte County took the lead 24 seconds into the third quarter on a 3 from McClure.

Appelhans hit a 3-pointer to temporarily give Blue Springs the lead back. Twenty seconds later, Mueller scored a layup, and charging foul negated a basket for the Wildcats, and Schultz then scored. Trimble had a steal and score, and Schultz added another basket, making it 30-23 — the largest lead of the game for Platte County.

The second quarter featured ties at 13, 15 and 18 and three lead changes.

Platte County’s only lead at the end of a quarter was outscoring Blue Springs 10-8 in the opening stanza. The Wildcats went up 8-3 but a 7-0 run in the final 1:51 gave the Pirates the lead.

Platte County senior guard Daunte Alaiwat hit a 3-pointer, before senior Dylan Montes’ only basket tied the game at 8-8. Schultz’s first basket broke the tie. He finished with 12 points, the only Pirates player in double figures. Mueller and McClure had eight each, followed by Fulk with seven and Trimble adding six.

“That was definitely the hardest game we have played, and we didn’t have our game,” Mueller said. “It stung a little bit. It was the first loss of the year. Hodge has a thing called the 24-hour rule. The next 24 hours you forget it and move on. The next day, the next play, new game.”

The Pirates extended the season-opening win streak to nine in a row with a victory over Southeast in the opening round of the Bulldog Classic on Tuesday.

Southeast made it close at the end by scoring 25 points in the fourth quarter, which trimmed a 13-point lead down to two possessions. Jaylen Pouncil accounted for 12 of the points for Southeast, part of his game-high 31 points.

Of the 17 points Platte County scored in the final quarter, 11 came from the free-throw line. Mueller went 5-for-6 and was 9-for-10 overall on the night, finishing with 23 points. Mueller’s nine-point first quarter helped the Pirates build an initial 17-13 lead over Southeast (3-8).

Platte County took its first 13-point lead in the second quarter by scoring 24 points with a balanced attack. Schultz led the way with six points, while Alaiwat and Trimble each had five points. Burnett scored four with Mueller and sophomore Chandavian Bradley each adding a basket.

Both teams scored 17 points in the third.