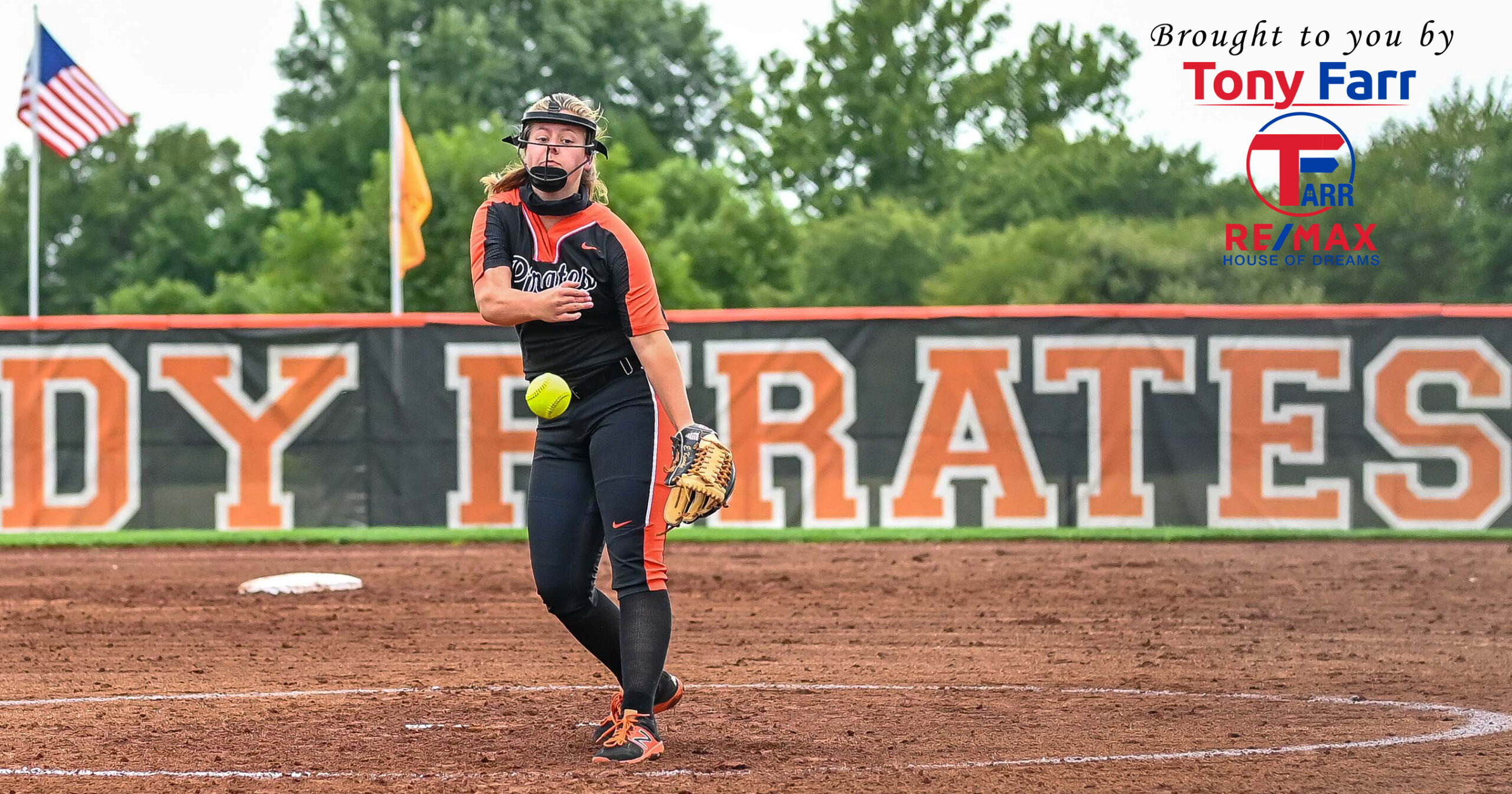 Despite a stop-and-start pattern to open the season, Platte County is one win away from its best start on the softball diamond in more than a decade. The Pirates picked up a 2-1 victory over Class 4 playoff qualifier Park Hill in their home opener Monday at Platte County High School.

Platte County simultaneously avenged its Class 4 District 16 championship game loss to the Trojans and ran its season record to 3-0 in the process. The Pirates also won three straight to open 2019, but they haven’t been 4-0 since 2009 — when they were 5-0 and went on to finish third-place at state in Class 3.

“It’s not a bad start and we are definitely happy with our first three games,” Platte County third-year coach Calli Peoples said.

Park Hill won last year’s district championship matchup between the two teams 6-0, and both teams had plenty of starters back, giving the game a familiar feel. Platte County took a 1-0 lead in the first and added an insurance run in the fifth before holding on behind senior pitcher Emma Koeneke’s complete game effort.

“It’s always really good to play a good team like Park Hill, especially early in the season so you can see where your team is,” Peoples said. “We came out playing pretty well. Overall, we played very focused. They knew they were playing a good team and wanted to play well.”

Platte County had two of its three hits in the first inning. Halle Magee had a one-out single and then stole second base. With two outs, the senior took third base on a passed ball to set up an RBI single to left field from sophomore Takayla ‘TK’ Lawson.

Some timely pitches from Koeneke helped Platte County keep the lead with Park Hill threatening to score in each inning from the second to the sixth. The Trojans had back-to-back singles to open the second inning and then a sacrifice bunt had two runners in scoring position with only one out. Koeneke, a Butler Community College signee, then got a strikeout and a pop up to escape the jam.

The next inning, a single and two-base error had the tying run at third base for Park Hill with one out. Koeneke coaxed a ground ball to Magee at shortstop. She threw to senior catcher Hayden Humes to cut down the lead runner and keep the Trojans scoreless.

Park Hill threatened to score again in the third inning with runners on second and third base with one out. Koeneke struck out the next two batters — perhaps the most important of her six strikeouts. The Trojans had two runners on base in the fourth, but Koeneke got another strikeout to end the inning.

“Emma pitched great, and we had pretty good defense all around,” Peoples said.

The offense gave Koeneke another run to work with in the bottom of the fourth inning when senior Ana Cesaro doubled to center field and moved up on Maddie Carter’s sac bunt. Demi Riechers, the sophomore No. 8 hitter, then placed a squeeze bunt down and Cesaro scored to make it 2-0.

Park Hill had runners on second and third again in the sixth inning but Koeneke got a ground ball back to the mound to end the inning. The Trojans got its only run in the seventh on Samantha Bertoncio’s solo home run to lead off the frame.

Koeneke then retired the next three in order to end the contest.

Platte County opened up the season with a pair of wins on Friday at Liberty High School in what ended up the only round of the annual Greater Kansas City Softball Coaches Association Tournament. Typically, the tournament is hosted at Adair Park in Independence, but in an effort limit attendance, hub sites were selected.

Platte County was slated to host Oak Grove and Park Hill on Saturday, but inclement weather led to the cancelation of those games.

The two wins on Friday were both by run-rule against teams that had winning records in 2019. The Pirates used a six-run sixth inning to secure an 11-1 win over Pleasant Hill in the opening game and then thrashed Class 4 state quarterfinalist Liberty 21-7 in five innings to close the night.

Platte County did face a deficit when Pleasant Hill scored in the top of the first, but the Pirates answered back with a two-run single from Lawson in the bottom half of the first to take the lead for good.

Koeneke, who pitched for the Pirates, aided her cause with an RBI single in the third to make it 3-1. She added an RBI triple in the fifth inning to bring home Lawson, who had a one-out single. Freshman Emma Reed entered the game as Koeneke’s courtesy runner and then scored on a passed ball to make it 5-1.

Some newcomers helped the Pirates put the game away for good.

Koeneke had a two-run, one-out double to make it 8-1, and sophomore Mackenzie Shields followed with a two-run single. Shields scored the game-ending run on Humes’ sacrifice fly.

Koeneke finished 3-for-4 with 4 RBIs at the plate and struck out nine while giving up only two hits to earn the victory against the Class 3 District 13 runner-up last year. Platte County had 10 hits, but the only other player with multiple hits was Lawson, who went 2-for-4 with 2 RBIs.

Against Liberty, Platte County had just 12 hits but took advantage of 11 walks and three Blue Jays errors. All nine starters for the Pirates reached base via a hit or walk in the victory.

According to records kept on MSHSAA’s website dating back 2009, this was the most runs Platte County has scored in a game. The previous high was 20, accomplished twice in 2018: William Chrisman and Winnetonka; against Raytown South in 2016 and versus Ruskin in 2009.

Platte County and Liberty have met four times over the past eight years — all in the Greater Kansas City Tournament — and the Blue Jays had been 4-0 before this showdown in those games.

Koeneke reached base five times — a single and four walks — and tossed three innings in relief. Shields drew the start and gave up three runs in two innings but had a team-high three hits at the plate.

Webster had a bases-clearing triple in the second inning to drive in the first runs of the contest. Liberty cut a four-run deficit in half with a pair of runs in the bottom of the second, but Platte County answered with six runs in the third inning. Lawson hit a two-run home run — after Koeneke drew a lead off walk — to spark the scoring in the third. The final four runs came with two outs on the board from a combination of two-bases loaded walks, an error and a wild pitch.

Webster racked up her team-high 5 RBIs thanks to a two-run single in the fourth, which made it 12-5. Cesaro drove in a pair of runs on a triple during the nine-run inning. Lawson, the starting first baseman, finished with 4 RBIs, driving home a run with a single in the fourth inning and then adding a sac fly in the fifth inning.

Despite not having a jamboree for a trial run to help fill in some questions that revolved around starting vacancies, Platte County clearly hit the ground running.

“Jamborees are good to see what is working, and we haven’t gotten to do that; we are still trying to figure it,” Peoples said. “We have new faces on the field and trying to figure out where they work best with the returning players. The girls didn’t act nervous in the first games. They came out ready to play and very confident and very sure of themselves. They played very mature and they have been really focused. That is all we can ask for.”