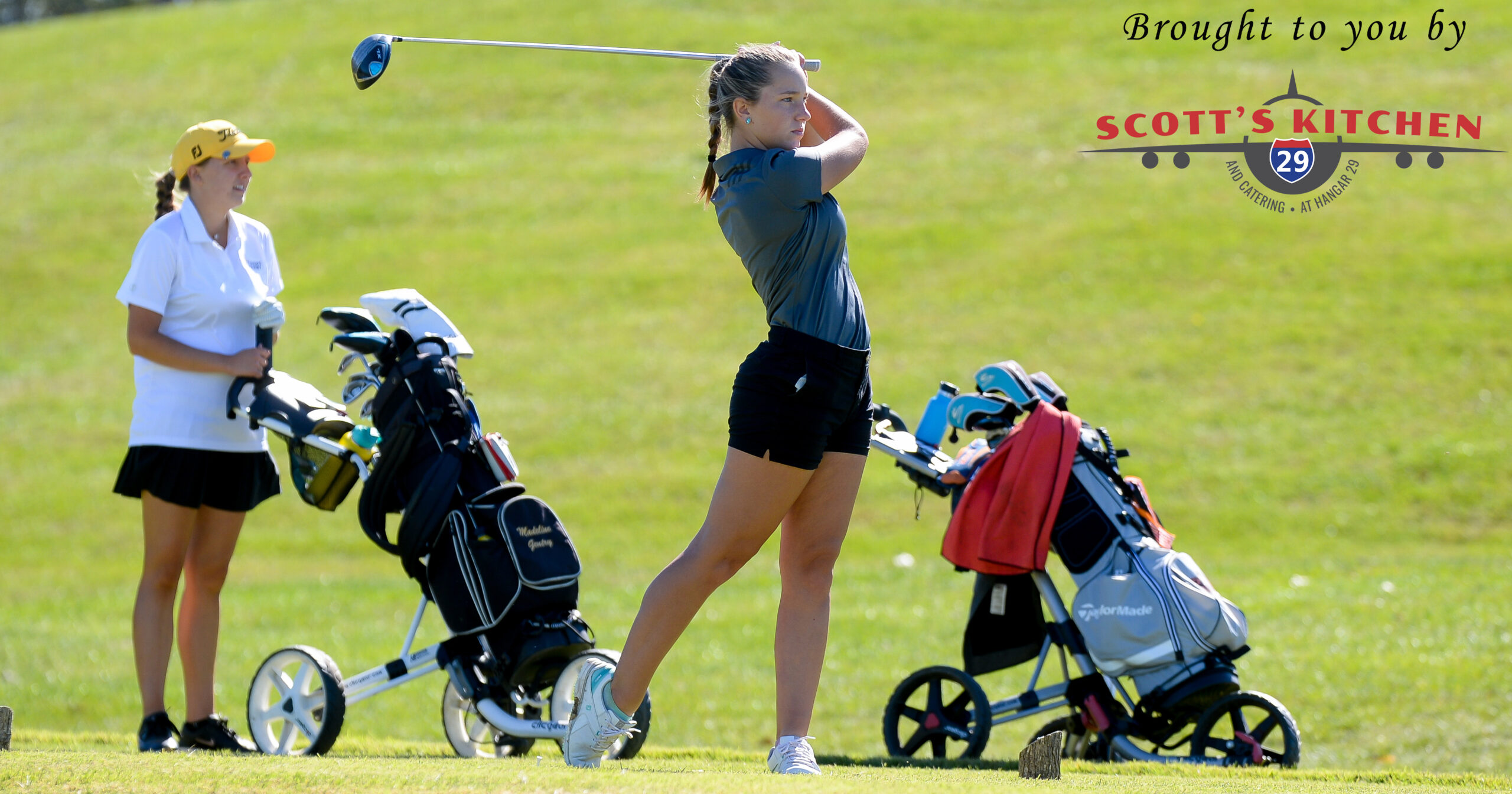 There were more than a few anxious moments for Mannon Bigus after she concluded her round in the Class 3 District 4 tournament Monday afternoon.

The Platte County senior closed the back nine well with a 45 but finished with a disappointing 102 — a score that left her tenuously close to the potential cut line. A week after taking all-conference honors and having a third-place finish at the Suburban Conference Blue Division Championships, Bigus’ season and playing career for the Pirates was in potential jeopardy.

After waiting for all the scores, Bigus ended up safe in 16th place. The state increased the number of classes from two to four this year and eliminated the two-tournament state qualification process that previously included districts and sectionals.

This year, the top 18 individuals qualified straight from districts, and for the first time since back-to-back trips in 2002 and 2003 in Class 1, Platte County will take all five players to state — including a relieved Bigus.

“It was very, very, very nerve-racking,” Bigus said. “I’m not a very patient person. Waiting for that (the final scores) for an hour and half was pretty rough.”

Platte County sophomore Bailey Silcott (88), junior Eden Shipp (92), senior Tori Sanders (97) and freshman Lily Ricketts (101) combined for a team 393, but with no automatic team qualifiers in the new postseason format, there were no guarantees even after finishing well back of District 4 champion St. Teresa’s Academy (333).

Part of a balanced top four all season, Bigus came in with the No. 5 score for Platte County and didn’t factor into the team score. Only four golfers had to come in with a lower score after she posted a 102 to knock her out of a state position.

Instead, Platte County has five first-time state qualifiers. In 2019, Shipp and Silcott both advanced to Class 2 Sectional 4 but missed the state line. Now, they are part of a historic group that will go to state as a team for the first time outside of the state’s lowest classification.

“It is a pretty great feeling,” said Platte County coach Trevor Short, who has been at the helm of five straight conference championship teams and will now take this group to the Class 3 Missouri State Golf Championships next Monday and Tuesday at Twin Hills Country Club in Joplin.. “We had a feeling going in there was an opportunity to advance all five, but since I started I never had a team go (to state).

Silcott didn’t leave any doubt about her qualification this season. She posted a 39 on the backside to shoot in the 80s for the first time this season and finished tied for fifth in a field of 43 players.

In 2019, Silcott also had a standout day and placed 10th at districts but couldn’t maintain the momentum the next week at sectionals.

“It is really exciting since I was cut short last year,” she said of her upcoming debut at state. “I’m excited to go this year. I’m kind of nervous but pretty excited.”

Shipp shot 92 (51/41) and took eighth place, while Sanders was 12th. Ricketts, who was not in the lineup for the Blue Division tournament last week, was perhaps the biggest surprise, tying for 14th.

St. Teresa’s and Platte County accounted for 10 of the 18 state qualifiers and posted most of the early scores, but Ricketts and Bigus were left to wait almost two hours until the final players came in about 3:30 p.m.

“In the beginning, I didn’t want to know what any of the scores were,” Bigus said. “I was listening to what other people were saying so I knew I might make it.”

Platte County will be one of seven Class 3 teams that qualified at least four individuals for state in Class 3 and will be eligible to compete for one of four state trophies. St. Dominic, Rockwood Summit, Cor Jesu Academy and Glendale are the teams from the other three districts, while St. Teresa’s Platte County and Kearney all come from District 4.

Platte County will play a practice round on Sunday at Twin Hills Country Club, which will be a par 72. There are five par 3 holes, eight par 4s – including four in row starting at one – and five par 5s that feature two back-to-back on both the front and back.

“I don’t know a ton about the course,” Short said. “I looked it up online, and I know it is tree-lined on every fairway. It is nothing we can’t handle. We played Fairview (in St. Joseph) this year and it can compare to that with the tree lines. I don’t know but greens will probably be different (than Fairview). We will go down Sunday for practice and try to get used to it.”

Platte County also hopes to get used to taking teams to state after this breakthrough effort.