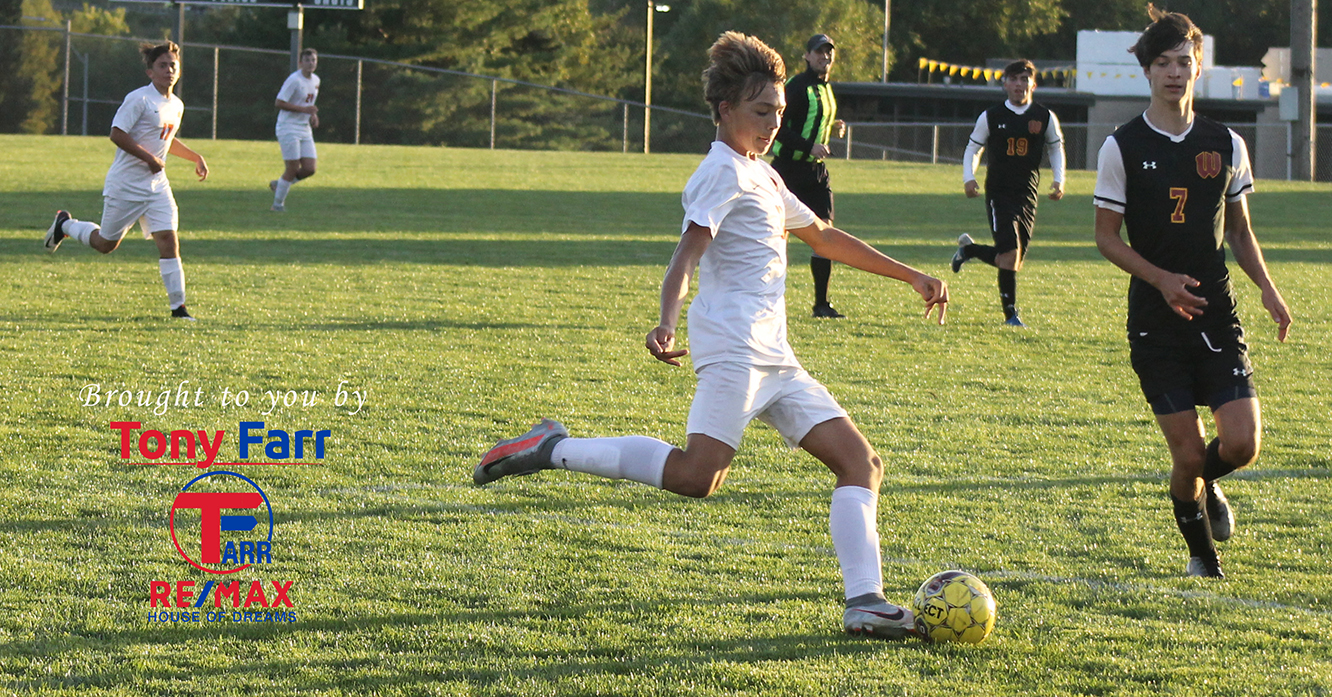 KANSAS CITY, Mo. — Platte County found itself in an unusual spot in a game that usually results in an easy victory, historically speaking.

Down a goal early and tied at halftime, the Pirates scored twice in a 7-minute span of the second half to pick up a 3-1 win on Thursday at Northgate Middle School in Kansas City. Kenny Loy had the go-ahead goal, while Nathan Macaluso added the final marker in the contest for what ended up a comfortable victory despite some tense moments.

“This game was rough,” sad Macaluso, a junior who scored two goals on the week to lead Platte County to a pair of Suburban Conference Blue Division wins. “The first half was really slow; we were bad. We brought it back and listened to our coach and made runs. We played more physical (in the second half).”

Platte County has won six in a row after losing the season-opener, and this marked the Pirates’  13th in a row against the Griffins dating back to 2014.

Last year, the two were about as opposite as you could find with Platte County reaching the Class 3 state championship game and Winnetonka going 0-20. The Pirates won both games last year 8-0, but fell behind 1-0 early in this game.

Winnetonka’s early goal was the first for them against the Pirates since an 11-1 loss in 2016. At the 17-minute mark, the Griffins’ had an attack that could’ve doubled their lead, but Platte County junior goalkeeper Patrick Sullivan came up with a sliding to save to keep the deficit at one.

In the 32nd minute, Platte County forged a 1-1 tie when senior forward Chamberlain Brownsberger beat Winnetonka goalkeeper Blake Barnes to his right side. The goal was set up by a cross from Gavin Nichols.

Platte County dominated time of possession in the second half and earned eight corner kicks.

“We needed to come back in the second half,” Platte County coach Ashlyn Brantley said. “We came out and set the tone. That is what we wanted to do and what we should’ve done from the beginning. They were sitting back, and we kept putting pressure, putting pressure. They were struggling to get it out of their half.”

Platte County recorded three shots on goal in the first seven minutes of the second half, including two in a row from Loy — a shot from inside the box and then a header after Barnes saved the first shot. The Pirates had an opportune scoring chance turned away when sophomore Joseph Ibarra’s header on goal was cleared off the line by Winnetonka defender Roberto Arellano in the 50th minute.

The scoring chances kept coming, a shot wide left of the goal and then a shot over the top of the cross bar, and Barnes made another save for the Griffins in the 57th minute.

Platte County broke the tie in the 62nd minute on Loy’s goal. Two minutes later, Barnes left the game after a collision with the goal post while going to make a save, and reserve goalkeeper Mason Wallace gave up a goal on Macaluso’s shot across the box off of a deflection.

“On offense, we possessed it a lot, and we played good balls through,” he said. “We finally got back into our game. It was good.”

Platte County had four more shot attempts and two more corner kicks over the final 10 minutes, but Wallace recorded saves on those.

“We were moving the ball quicker in the second half than the first half — playing the one-two touch and not just letting it stop and give them time to close us down,” Brantley said. “We were looking to switch quickly, which we were managing to do and created many more chances in the half.”

Sullivan didn’t face a single shot in the second half for Platte County, which plays in the reduced four team Panther Classic at Park Hill South this week. The Pirates open with the hosts on Monday with the winner advancing to Wednesday’s title game and the loser playing in the third-place game.

The Pirates picked up a shutout Blue Division win on the road Tuesday on goals from senior Joey Habel and Macaluso.

Up 1-0 late into the game, Habel provided some breathing room in the 67th minute on a penalty kick, slotting his shot to the right and past Grandview’s goalkeeper. Macaluso scored a goal in the first half for the Pirates, and Sullivan had his second straight shutout and third in a span of six games.