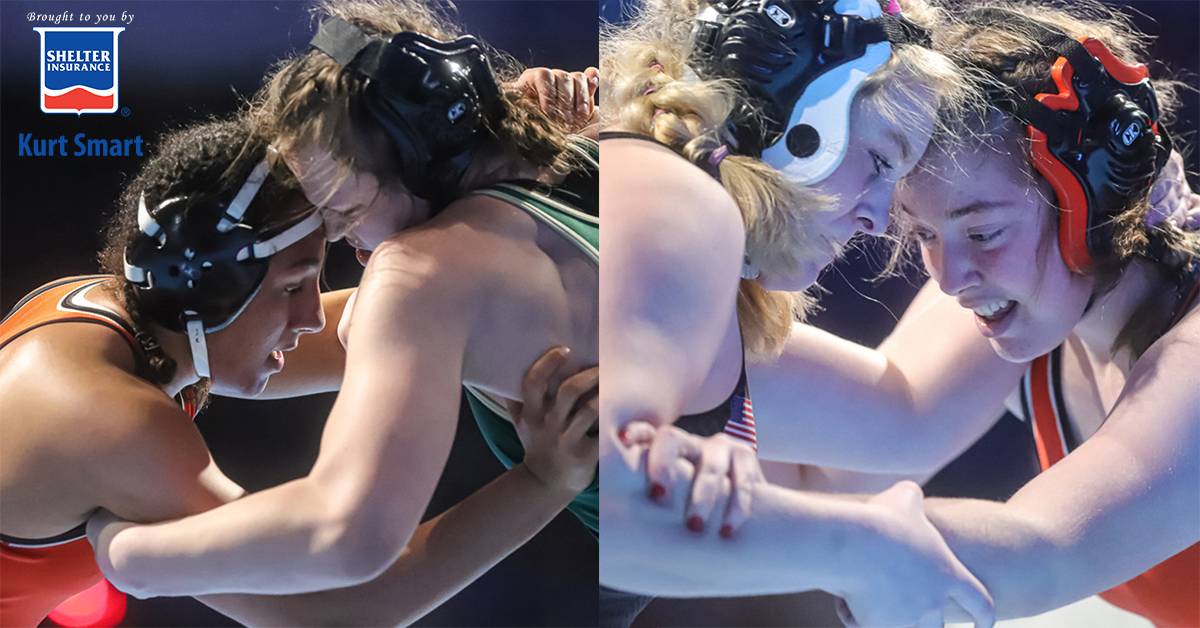 INDEPENDENCE, Mo. — The successes and disappointments for Sarina Bertram and KayLyn Munn have often been intertwined as the founding members of a third-year program.

Bertram, a senior in her final high school competition, reached the 159-pound final but ended up pinned in the first period. Minutes later, Munn, a junior, took the mat for the 195 championship bout and lost by fall in the second period.

“Not the ending I wanted but two finalists, first two finalists in Platte County history in women’s wrestling,” Platte County coach Reggie Burress said. “They work hard and get better all the time. They only wrestled three years so they’ve got a huge upside in the future. The final is not what we wanted, but we will take it and build from there.

Coming into the tournament, Bertram and Munn were already the only district champions in program history, and due to this year’s unique postseason format as a result of COVID-19, the first — and possibly only — sectional champions, as well.

Platte County’s only two qualifiers both went 2-1 after receiving first-round byes and racked up 40 points, helping the Pirates to a 12th-place team finish in the final standings.

Bertram closed her season with a 41-2 record, winning her quarterfinal and a very bizarre semifinal match before losing to unbeaten Lafayette Wildwood senior Josette Partney (36-0), who entered ranked No. 1 at 159. Munn (36-3) led top-ranked Catherine Dutton, a sophomore from Central (Springfield), but chose down in the second period and ended up pinned.

Munn will have another chance to come back next year and match Bertram’s program-record of two district titles with goals of becoming Platte County’s first three-time state medalist and first state champion. However, this was the final opportunity to wrestle alongside Bertram, her frequent practice partner and now close friend.

“It is great,” Munn said of getting another medal with Bertram. “We worked really hard, but it was not the outcome we wanted. We pushed until the end, and that is the outcome we got.”

Bertram, ranked No. 6 in the state coming into the tournament, received one of the more difficult draws, drawing No. 5-ranked Elise Falcetti of Lindbergh in the quarterfinals. Bertram overcame an early deficit and cruised to a 10-4 decision win to guarantee a state medal and no worse than a fourth-place finish.

Then came a tense and ultimately confusing matchup with Kirkwood senior Emma Schreiber, a familiar foe for Bertram. The two met twice in last year’s state tournament with Schreiber, ranked No. 3, winning both by pin, including the second in the third-place match.

Schreiber built a 3-0 lead early on an escape and then a takedown in the second period, while also picking up a stalling warning, but Bertram scored a late reversal to pull within 3-2. She then chose neutral to start the third period but could not come up with a winning takedown.

However, the official called a second stall against Schreiber with 4 seconds left and the table officials temporarily awarded the penalty point to Bertram, who should have been tied. But the official on the mat never gave the point and restarted the match with time running out, and Schreiber having her hand raised in victory.

Both wrestlers left the mat, but Burress protested the call. Eventually, the penalty point was awarded when Bertram found out she could return to the mat for overtime of the semifinal matchup.

“It sucks to be in that situation for both girls,” Burress said. “You’ve got to focus mentally and get after it. It is my job to fight for my wrestlers, not my job to correct the score.”

At first, Bertram thought she had to return to the mat for the third-place match but received time to pace back and forth while officials corrected the mistake. By the time the match resumed, Bertram was wrestling on mat No. 3 and Munn had started her 195 semifinal on mat No. 2.

Bertram didn’t need much time to take advantage of the second chance, scoring a takedown almost as quickly as the restart happened, winning 5-3 in sudden victory.

In the finals, Partney, third-place finisher last year and state runnerup as a sophomore, scored a takedown late in the first to take a 2-0 but ended up turning Bertram for the pin in 1 minute, 49 seconds.

Munn, a three-time state qualifier and sixth-place medalist at 187 as a sophomore, also found herself in a tough part of the 195 bracket. She entered ranked No. 3 on a long winning streak but ended up facing second-ranked Ste. Genevieve junior Maggie Myracle in the quarterfinals.

Munn appeared headed for decisive victory with leads of 4-1 and 6-2 but received a stalling point, earned an escape and score the tying takedown in the final 22 seconds of regulation. After a scoreless 1-minute sudden victory period, Munn chose down in the first of two 30-second tiebreaker periods and came up with a reversal that gave her an 8-6 lead.

Myracle chose down for her period but couldn’t escape and lost an 8-6 decision.

In the semifinals, Munn matched up with No. 4-ranked Smith-Cotton senior Kali Butts, who took a 2-1 lead with two near-fall points early in the second period. However, Munn had received a penalty point for clasping at that point and then came up with a reversal to go in front 3-2. Butts then gave up a penalty stalling point in the third period, leading to a 4-2 decision win for Munn.

In the championship, Munn scored a first period takedown for a 2-0 advantage but did not make it out of the second period after being turned and pinned in 3:11.