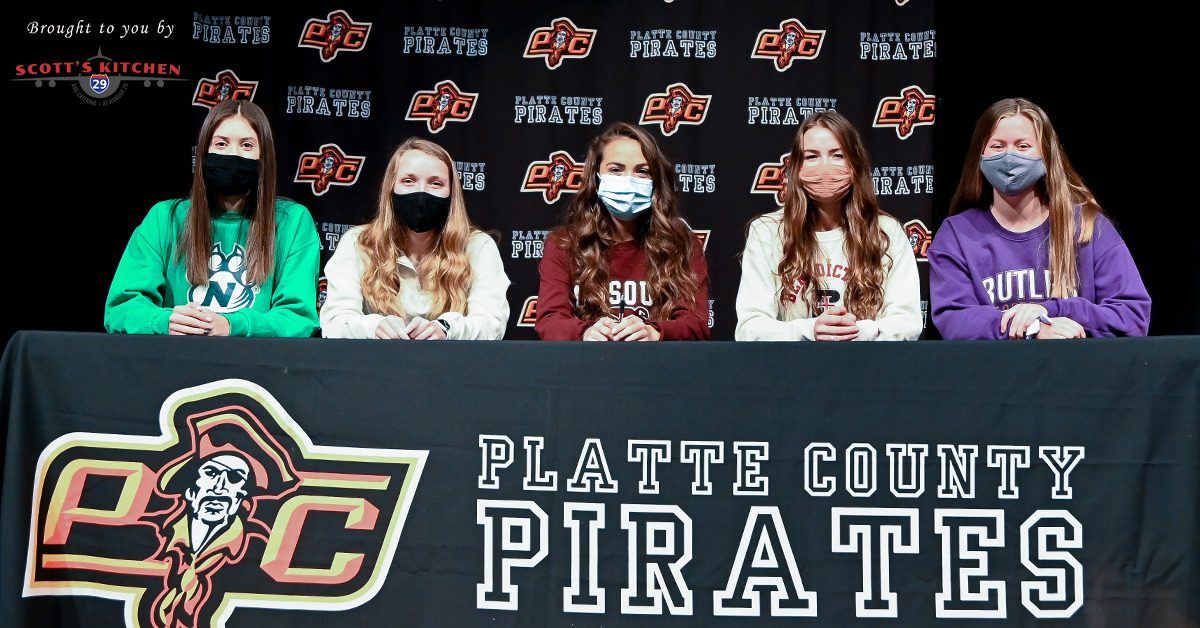 Emma Koeneke, Maddie Carter and Grace Heater have spent the better part of the their lives occupying the same softball field as teammates.

The chance for three lifelong teammates to celebrate again together on the heels of a run to the Class 4 state softball semifinals was special.

“It was exciting to sign with two of my teammates,” Koeneke said. “Couldn’t have asked for a better senior season. Love all of my teammates, and a lot of them showed up tonight. I’m glad I could be a part of this high school team.”

Platte County went 21-2 this season and beat Smithville in the Class 4 District 8 championship game to make a long-awaited return the playoffs. The Pirates last district title came in 2014 when they finished as Class 3 state runnerup, but a win over Grain Valley in this year’s quarterfinals gave the program its first state berth in Class 4.

Prior to this season, the state expanded to five classes, and Platte County remained in Class 4 and dropped out of the largest tier of teams.

The Missouri Fastpitch Coaches Association named Koeneke to the Class 4 all-state first-team after she was a second-team selection as a freshman in Class 3. Also a four-time All-Suburban Conference Blue Division and all-district pick, her career will continue at Butler with eyes on a potential Division I landing spot.

“Butler is a power JUCO,” Koeneke said. “They have an extremely good program, and I love the coach. He’s very adamant on getting me to the next level.”

Carter played in 21 games in centerfield while occupying a premium spot in the lineup, but her season unexpectedly ended in the comeback 4-2 win over Smithville to avenge Platte County’s only loss of the season in the Class 4 District 8 title game. Due to contact tracing, she was held out of the two playoff games and watched from afar, knowing she had played her last high school game before planning to continue her career at Benedictine.

Despite the disappointment, Carter told coaches that she felt fortunate that her absence didn’t end the season for the rest of her teammates. The Pirates made the district title game in four of the previous five seasons, but this senior class had only one chance left to end the frustrating streak.

“It was really amazing to watch them pull through after what happened, which is really unfortunate,” said Carter, who earned second-team AFCA all-state honors with a .396 batting average, a team-best .524 OBP and 27 runs scored (second highest total for the Pirates). “But I was really proud more than anything to watch them fight through that adversity and stay positive through it all. Honestly, it’s just the overall goal of the team.

“Us seniors came in knowing we wanted to win, so by the end of the season if I wasn’t playing but the team was still able to I just wanted them to achieve our goals.”

Heater played right field for Platte County and earned All-Blue Division honors all four seasons — second team as a freshman and sophomore and first team as a junior and senior. She also made first-team All-Class 4 District 8.

In 20 games, Heater hit .339 with a with a .414 on-base percentage with six doubles and four triples, tied with senior shortstop Halle Magee for most this season. Heater and Carter spent a lot of time in the same outfield and now will have the potential to be in opposing dugouts for the next few years with MidAmerica Nazarene and Benedictine being in the same NAIA conference.

“It’s definitely going to be weird because I’m confident with Maddie and having her by my side,” Heater said. “It’ll be different and take some getting used to.”

Giger was the only Division I signee in the group, choosing Missouri State as the place to pursue her degree in kinesiology and continue her long distance running on the track and cross country teams.

Giger earned a berth in the Class 4 Missouri State Cross Country Championships in 2019 as a junior and placed 38th. However, injury and other circumstances limited her participation as a senior, and while Platte County earned a team state berth in this year’s five-class setup, Giger did not make the top seven for the postseason. The Pirates went on to place eighth as a team.

That means the planned return to the track this spring will end a somewhat lengthy layoff for Giger, who qualified for the Class 4 Missouri State Track and Field Championships as a sophomore in the 3,200-meter run and as part of the 4×800 relay. She placed 11th in her individual event, and the Pirates were 14th in the relay. Last year’s track season was cancelled due to COVID.

Giger will set her sights on the long-distance Platte County records of Rebekah Geddes in this year’s season.

“I was very disappointed in my (cross country) season this year, but at the same time, I understood it wasn’t in my control,” Giger said. “I was just glad that I was there to support the girls through everything because they deserve everything they got. I’m extremely excited for track. That’s my rebound, and I’m even more excited that I can participate (beyond high school) at the D-I level.”

Luna already holds the Platte County school record in the 400, a mark of 57.97 seconds set in the state final her sophomore season. She placed second in that event and also anchored the Pirates’ 4×400 team to a fourth-place finish after they set the school record a week earlier at the Class 4 Sectional 4 meet.

Also a part of the school record 4×200 relay, Luna qualified for state in the open 200, as well, in her last competitive season on the track. Despite the time off, she visited and committed to Northwest Missouri State in Maryville, Mo. and didn’t wait to see if a Division I program might come calling with a strong senior season.

“I like Northwest because it’s a smaller campus,” said Luna, who was joined on stage by Platte County athletic director and former head track and field coach Gabe Middleton donning a green Bearcats hat for his alma mater and in support of Luna’s choice. “I’ve gone to Northwest every year for winter track meets so I’ve talked with the coach. He seemed really nice, and I’ve always felt really comfortable there.”

Also a state qualifier in the 4×200 and 400 as a freshman, Luna spent the fall playing middle blocker for Platte County volleyball, which made its first-ever trip to state and finished a program-best third place in Class 4 earlier this month. She now shifts her focus back to running with a chance to lower her school record in the open 400 and dedicating all of her time to her preferred collegiate sport.

“Last year, I felt like it was going to be such a good year just coming off my sophomore year and going to state,” Luna said. “This year, I feel like I’m going to get into winter workouts, and it’s going to be a great year. I’m super excited.

“It was so fun to go to state (in volleyball), like the experience was so much fun and it’s an experience I’ll never get again. That’s a lifetime experience.”