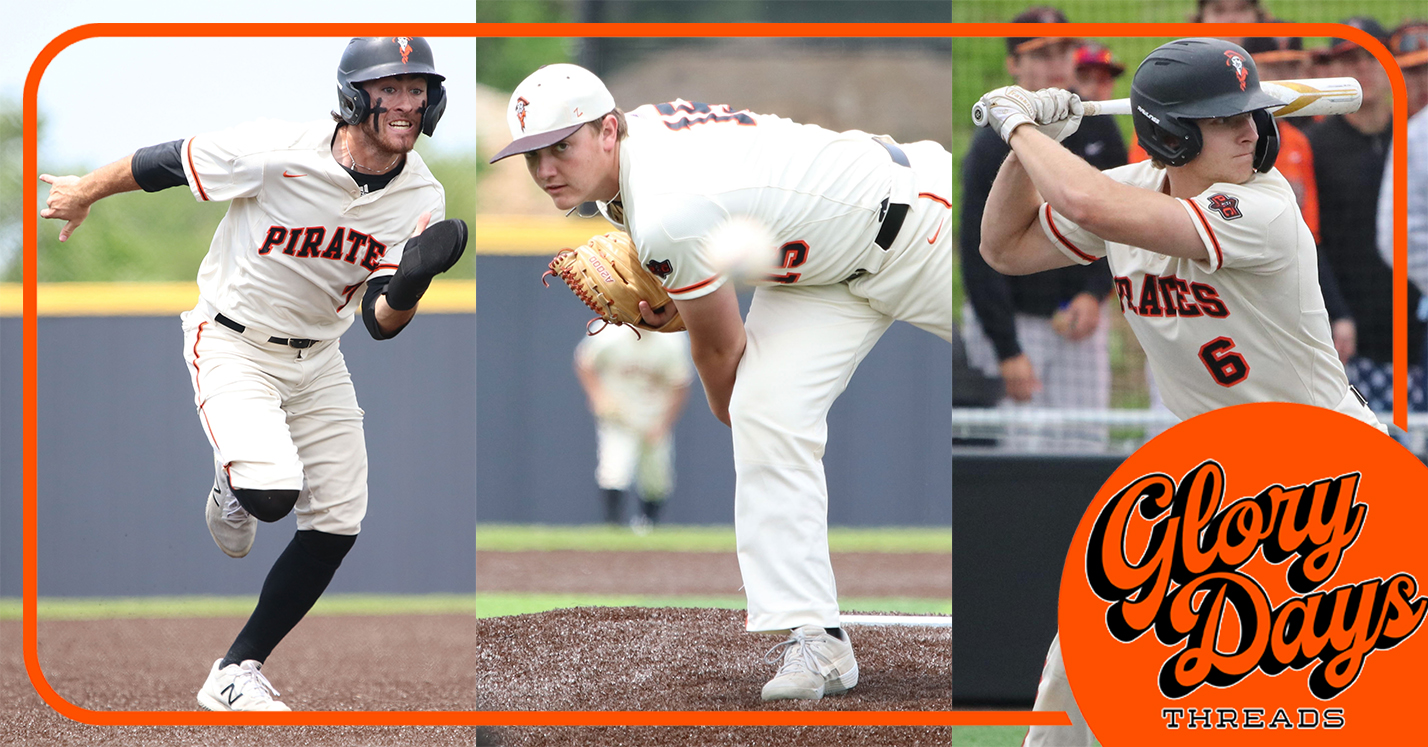 None of the trio played as freshmen, and all lost their 2020 sophomore season due to COVID-19.

A core of nine seniors led Platte County (27-8) to the Suburban Conference Blue Division crown, a Class 5 District 8 title this season and the first playoff appearance since 2017. The Pirates then defeated Webb City, Fort Zumwalt East and Dexter to capture the state championship, first for the program since a Class 3A title in 2002.

Allen, Knudsen and Lewis were at the center of the entire run, and all were first team all-state selections.

The No. 1 pitching option for a second straight year, Allen led Platte County with 12 starts, 43 2/3 innings pitched and 62 strikeouts. The left-hander compiled a 5-1 record with a 2.73 ERA and team-best 1.01 WHIP, and the Rockhurst signee’s senior campaign also included a six-inning perfect game against Winnetonka — believed to be the first in program history.

Allen started all three playoff games and recorded the victory in two. In the state semifinal, he started but exited with an 0-2 count and two outs in the second against Fort Zumwalt East, limited to 29 pitches to give him the ability to go as long as needed in the place game. The Pirates came back for a 5-3 victory, making the move pay off.

In the championship game against Festus, Allen went 3 1/3 innings the next night in the title game with seven strikeouts before exiting in the fourth with a 1-0 lead. He then came back on in relief of sophomore Brayden Carter and recorded the final two outs — both by strikeout — to finish off a 6-1 victory. That means Allen started two games and made a relief appearance in a two-game state series.

Splitting time with junior Cameron Dean early in the year, Knudsen became the every game backstop in his first season as a starter for the stretch run and finished the year as Platte County’s leading hitter with a .421 average and .515 on-base percentage. In all, five of his 24 hits went for extra-base hits (three doubles, one triple and one home run), and his 22 RBIs ranked second behind only junior third baseman Nick Baker for the team lead (23).

Knudsen went 4-for-8 with two walks, six RBIs and two runs scored in Platte County’s three playoff games. He provided a pair of two-run singles — one to tie the score 2-2 and the second for the go-ahead and winning tallies — in the comeback against Fort Zumwalt East. His RBI single in the top of the fourth of the championship game gave the Pirates a 1-0 lead they didn’t relinquish.

Additionally, Knudsen finished a a double play in each of the final two state games off of outfield assist from junior Dayne Wimberley (vs. Fort Zumwalt East) and sophomore Devin Wassmann (vs. Dexter) in what will be the final two competitive games of his career, barring a change in his college plans.

Lewis took over shortstop duties from Game 1 as a junior and developed into a reliable presence, committing just two errors in 91 chances on defense this season. He also batted in the top third of the lineup all season and finished with a team-high 37 hits with a .398 batting average — second only to Knudsen for Platte County. He added 16 walks for a .509 OBP to also rank second behind Knudsen in that category, while his 17 stolen bases were tied for the most with Wassmann.

Among his 37 hits, Lewis, signed to Maple Woods Community College in Kansas City, contributed seven doubles and a triple, while adding 16 RBIs and 31 runs scored — second for Platte County behind Baker’s 32.