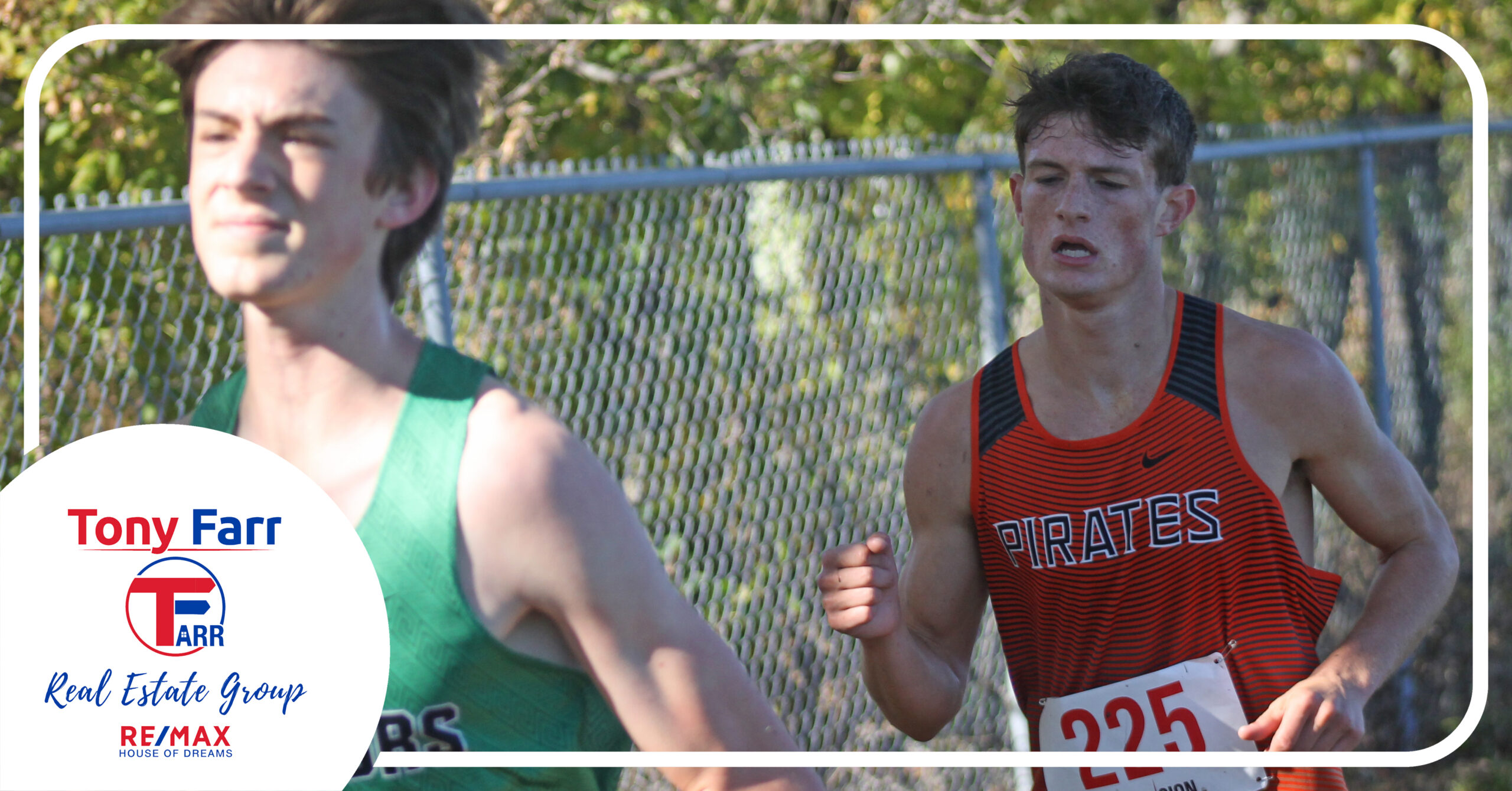 Next up, Platte County will continue to follow senior No. 1 Andrew Early, developing sophomore Andrew Johnson and senior leader Jace Trimble to the Class 4 Missouri State Cross Country Championships for a second straight year. The team berth became possible when the Pirates put three runners in the top six on a muddy course with tight turns to end up with a team total of 37 after just one point separated the two teams at conference.

“It is all them; they have great leadership, and the boys are very strongly bonded together,” Platte County first-year coach Courtland Ingram said. “They believe in one another, and they did a great job. They were racing to race and compete as hard as they can and finish as high as they could. They earned every bit they got. It is tough when you add more teams, you have more runners. Challenging for something like that (district title), it gets everyone, even the sixth and seventh runners, to come into play. It is fun for those boys.

Early claimed runnerup honors as an individual for Platte County at 17 minutes, 1.1 seconds to finish 20-plus seconds behind District 4 champion Drew Belardo, a senior from Warrensburg. Johnson came in fifth at 17:12.88, while Trimble was next but an interval back of the top five at 17:45.34.

Smithville put four in the top 10 and all five scoring runners in the top 12 but couldn’t catch the top-heavy Pirates thanks to strong showings from Platte County junior Kage Audas (11th, 18:07.00) and sophomore Kade Meinke (13th, 18:21.48). The Pirates handled the conditions and came up with its second straight team district title.

“It was by far one of the worst races we have run in with the mud and water,” Trimble said. “I can only think of one other race that was this bad. The course was a loop, and by the time we came back a second time, there were three races that ran before us. It was just bad … just bad. We came out and won it still no matter the condition.”

Platte County placed eighth at state a season ago in a resurgent season in the state’s first year sponsoring five classes for the sport. The Pirates lost No. 1 and 2020 Class 4 District 8 champion under a different postseason format Blake Bjustrom and Andrew Plymell off that squad but filled the gaps with Early, Johnson and Trimble moving up the ladder.

In addition, Audas ran most of last season in the top seven but missed the postseason due to COVID-19 protocols.

Meinke, junior Tanner Johnson (17th, 18:39.08) and freshman Ben Letcher (19th, 18:50.33) helped fill out what became a Platte County roster so deep this season that returning state qualifiers from last year’s eight-place state team senior Anthony Talley and junior Aspyn Hutchinson-Nelson did not make the postseason lineup. The Pirates will now enter with legitimate aspirations of earning the third team trophy in program history and the first since doing so in Class 3 back in 2002 and 2003.

“I’m excited my last race will be at state; it makes it so much better than just a regular race,” Trimble said. “Early and I are excited to give it our all as the seniors on the team. We want to place this year and really give everyone good vibes to bring their best performance at state. We will go out there and have fun and do what we need to do and hopefully it will turn out the way you want to.

“We are dead set on coming back with a trophy. We want to really bad.”

Even following the race, no one could confirm if Platte County previously pulled the conference-district double. The Pirates won the Midland Empire Conference title in 2002 and 2003, but the Missouri State High School Activities Association doesn’t list district cross country championships in its online records.

Platte County has not achieved the feat since moving to the Suburban Conference more than a decade earlier. The Pirates would’ve accomplished the feat last year but a coaching error led to a team disqualification in 2020 and nullified their Blue Division title.

Bouncing back from the disappointment, Platte County won a smaller Class 4 District 8 race in a postseason format designed around limiting large groups of people as part of COVID-19 protocols. Sectionals remained eliminated this year, but the new setup created four “super districts” per class with the top four teams guaranteed qualification. Any other runners in the top 30 not from qualifying teams also qualify.

Bjustrom showed up at the course on Saturday to cheer his former teammates and friends in their effort to repeat and didn’t miss a chance to personally congratulate them after completing the task.

This year’s state race will be at 9 a.m. Friday on the Gans Creek course in Columbia, where Platte County experienced low times and solid results in a regular season race earlier this season. Early, Johnson and Trimble also ran there in 2020 as part of the Pirates’ first state qualifying team since 2013.

Early came in 56th in his state debut, while Johnson went from off the radar to 68th in the final race of his freshman season with the best time of his career to that point. Trimble came in 83rd.