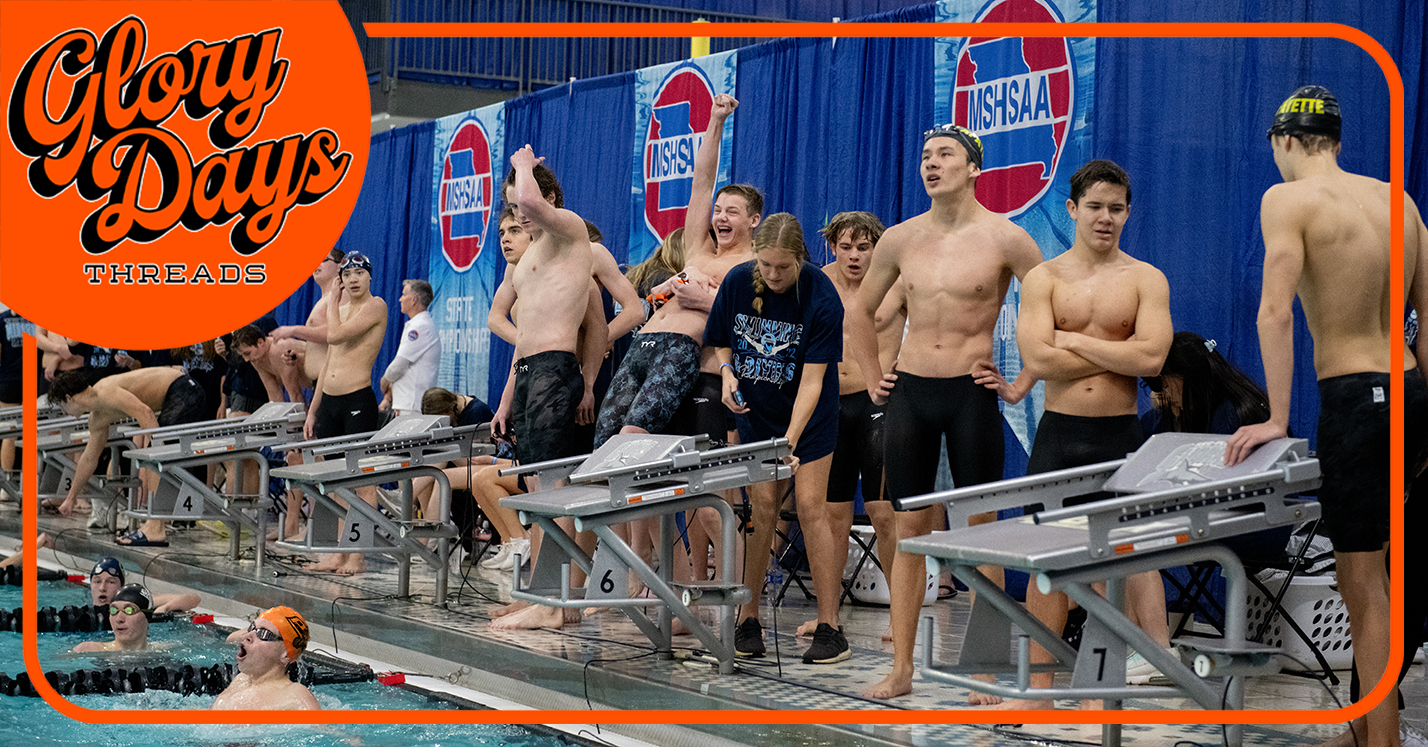 In the final race, Platte County simultaneously put a cap on the careers of an accomplished senior class and displayed the undeniable talent of a super sophomore duo. The Pirates secured the final 14 of 63 team points in the Class 1 Missouri State Swimming and Diving Championships with a 10th-place finish in the 400-yard freestyle final Saturday at Rec-Plex in St. Peters.

Platte County’s quartet of seniors Collin Burton and Gage Jonkman and sophomores Deacon Gutshall posted a school-record time of 3 minutes, 22.17 seconds to place second in the consolation final. The Pirates chopped almost 2 full seconds off of Friday’s preliminary performance, which qualified them in the No. 12 spot, and bested the mark set last season at state.

Perhaps most importantly, Platte County set the program record for most points scored in a single state meet, tying for 13th in Class 1 with Lebanon. The Pirates were also 13th in 2017 with 61 points — the previous best mark.

Platte County took 11 to state, and five factored into the scoring spread across six events.

As expected, Keith and Gutshall paced the way with a a top-eight, all-state and honorable mention all-state finish apiece while combining to break three of their won school records. The Pirates also put up big points scored in both the 200 and 400 freestyle relays with senior Carson Howe combining with Burton and the sophomores for the shorter of those two races.

While coming up 20 points short of a top-10 finish, Platte County closed out perhaps the best season in program history, continuing to thrive in the sixth year since the state divided the sport into two classifications.

In Friday’s preliminaries, Keith sent 1:56.58 to better his own school record set earlier this season by about 2 1/2 seconds. He qualified for the finals fifth and held that spot in the finals while turning in a slightly slower time (1:57.23). The all-state placement — second of his career — matched the fifth-place finish for Caden DeLay as a senior in 2017 (100 breaststroke).

Keith did not quite reach DeLay’s school record in the 100 breaststroke and missed a spot in the final by .02 of a second. He qualified for the consolation final with the No. 9 overall time (1:00.76) and ultimately finished 10th in 1:00.64.

Now all-state in each of his first two seasons, Keith placed seventh in the 200 IM and 16th in the 100 butterfly as a freshman.

Gutshall experienced his breakthrough state performance. He made his individual debut last year as one of the last qualifiers in the 500 freestyle and then narrowly missed out on a spot in the consolation final, ultimately helping him find a new focus.

Finding continued success in longer events, Gutshall broke his own school record in the 500 freestyle in both preliminaries and finals to earn all-state honors at sixth place, while also winning the consolation final to place ninth and again break his own record in the 200 freestyle once.

Three weeks earlier, Gutshall set school records in all four individual races while helping lift Platte County to the Suburban Conference White Division team title — first for the program since 2014. He nearly did the same at state, going 1:47.64 in the 200 freestyle prelims to miss his mark by .02 of a second. He qualified ninth and then held that spot with a 1:46.45 in the final to cut more than a second off his previous career best from the conference final.

Gutshall broke the 4:50 mark for the first time in his 500 freestyle preliminary to set a school record at 4:49.57. He qualified for the final in seventh and then moved up to sixth with his 4:49.02 on Saturday.

Prior to this season, only Nathanial Savage had gone under 5 minutes in the event for Platte County, and Gutshall has now lowered the school record mark by more than 8 seconds. He later took the 200 freestyle mark from Keith, who set three individual school records as a freshman and still holds the 200 IM and 100 butterfly marks.

Gutshall has now shaved about 5 seconds off of Keith’s previous school record in the 200 freestyle.

Burton came into the two-day meet with the most state experience, having swam on at least one state relay each of the previous three season. He also swam in two individual events for the third straight year, placing 27th in the 200 freestyle (1:53.94) and 31st in the 100 butterfly (57.63) preliminaries.

The trio of Burton, Gutshall and Keith contributed to both honorable mention all-state relays.

Combined with Howe in the 200 freestyle, Platte County went fastest in preliminaries (1:32.46) but qualified for the consolation final 14th and held that spot in the final (1:32.82). The Pirates’ season-best was 1:31.49, and they came into state chasing the school record but missed the mark.

Platte County’s 400 freestyle relay team with Jonkman did hit the school record mark, first posting a season-best of 3:24.10 in the preliminaries — 12th-fastest in Class 1. The Pirates then moved up to a 10th-place finish with a 3:22.17 mark in the finals that broke the previous school record of 3:23.82 from last year’s 12th-place finish with Burton, Keith and Howe plus graduated Dylan Bietz. That same group of four placed 10th in last year’s 200 freestyle, as well, and Burton was also the lone holdover from a 16th-place 400 freestyle team that claimed the team’s only two state points in 2020.

In addition to the sophomores and Burton, Jonkman and Howe also earned individual berths.

Howe turned in career-best performances in the 50 and 100 freestyle races at conference to earn one of the final state spots in both events. His individual state debuts resulted in 32nd place in both the 50 (23.45) and 100 (52.71). Jonkman made the 500 freestyle field for a second straight year and set a season-best at 5:15.88 to finish 26th after posting his career best at state last year while placing 19th in addition to competing in the 100 backstroke prelims as a junior.

Currently, swimmers have to post a state consideration qualifying time, and the state then takes the top 32 entrants in each event with all qualifiers limited to two individual events and two relays. The top eight in preliminaries advance to the championship final while spots 9-16 go to the consolation final. The top 16 in each event score team points, assuming no disqualifications.

With those parameters in mind, Jonkman and Howe were also on Platte County’s 200 medley relay with senior Weston Grimes and junior Brayden Carter — two more swimmers making their state debut. The Pirates were 27th in preliminaries at 1:49.46.

Platte County has now recorded at least one point at state for seven straight years, including all six since the class split. The Pirates have made an impressive climb from 2020 to 17th last year with 37 points and now with similar momentum that helped produce the run of 16th in 2019 (40 points), 16th in 2018 (53 points) and 13th in 2017 (61 points) in the first year of the two-class system. They scored a single point in 2016 with every school in the state in the same competition to start the current streak.