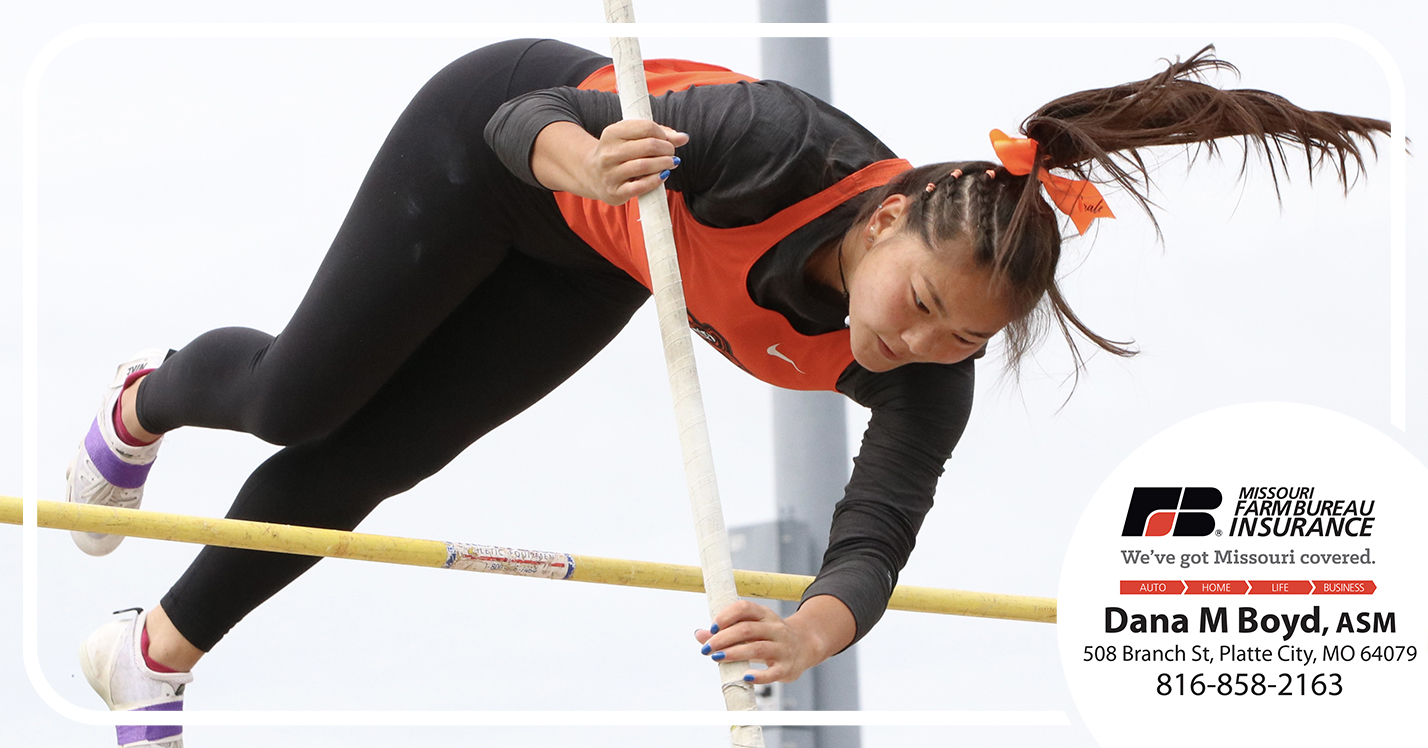 However, a concussion suffered during competition set Platte County’s star pole vaulter back to start her potentially record-setting senior season. She still hasn’t reached her previous heights but cleared 3.20 meters in Saturday’s Class 5 Sectional 4 meet at Lee’s Summit North to earn a unique state return by placing third in a field of seven.

Sullivan goes into the Class 5 Missouri State Track and Field Championships this weekend in Jefferson City knowing a solid performance could help her climb the podium and change the trajectory of an occasionally difficult season. She entered as the defending Class 4 state champion, but Platte County’s move up to the state’s largest classification made not only a repeat title difficult but also put a second straight state medal into question.

“(The injury) was definitely a shock, especially since it was the first meet,” Sullivan said. “I don’t feel like it’s been that big of a setback. I’ve got a good team and great coaches that have encouraged me and supported me so it hasn’t been too hard to get back into.”

Platte County entered the season with high hopes and expectations after capturing the program’s first Missouri State Track and Field Championships team trophy with a fourth-place finish in Class 4. The Pirates were moving forward without a key group of seniors but could have pushed for another top-four showing before finding out about the move to Class 5.

The priorities changed, and Platte County looked to maximize state qualifiers in the new postseason assignment. Sullivan and junior Reese Pickett (triple jump) both earned repeat trips after winning medals a year ago, while sophomore Sisely Mitchell pulled another long-distance double with runnerup showings in the 1,600- and 3,200-meter runs in Class 5 Sectional 4. The Pirates also loaded up the 4×100, 4×200 and 4×400 relays using soccer-first seniors Riley Smith and Triton Davey.

With Smith and senior Molly McBratney back from last year, the 4×200 quartet also including Davey and junior Hannah Mand was the only one to advance back to state. The top four in each event from the prior week’s District 7 and District 8 meets were at Sectional 4 with the top four again moving on in the postseason.

Sullivan finished her competition early in the morning, and as she does at most if not all meets hung around for the day to cheer on teammates in their quests to join the state contingent.

“Moving up to Class 5, it was a little unknown whether or not we would perform as well,” Sullivan said. “But we held strong, and we’re going to have a lot of people going to state. It’s very important just because being a part of a team so big last year has taught me how important it is to support each other this year.”

Uniquely, Sullivan’s career started in Class 5 and will finish in the same spot after a unique journey. As a freshman, she qualified for state while at Park Hill South and just missed a top-eight finish.

With the 2020 season canceled due to COVID-19, Sullivan began her career at Platte County after transferring as a junior and went on to become just the third individual state champion in program history and the first ever in a field event. She went into this season chasing records but suffered a concussion in windy conditions during a season-opening meet and didn’t return until mid-April.

Sullivan closed the season well by winning the Suburban Conference Blue Division title but cleared just 3.14 meters at District 8 to place third. After quickly moving into the top four to assure a state return at Sectional 4, she eventually lost the tiebreaker for second Saturday to Park Hill senior Lauren Carpenter at 3.20 meters with Liberty elite junior Rachel Homoly winning the competition with her first clearance going up to a winning height of 4.12 meters.

Homoly and Oakville sophomore Mason Meinershage tied for first at state in Class 5 a year ago at 3.89 meters with Homoly taking the gold medal on a tiebreaker. Sullivan tied and won the tiebreaker with now-graduated Platte County teammate Abbie Schwieder at Class 4’s winning height of 3.47 meters.

Sullivan at points in her career has held the school record at both Park Hill South and Platte County — the latter with a 3.51 meters clearance as a junior. Schwieder eventually passed her back at 3.53 meters and has held that with Sullivan’s season-best still sitting at 3.40 meters with only one competition left.

“Well, it’s senior state,” Sullivan said. “It’s the last one. I’m just going to enjoy my time. My friends are going to be with me, and hopefully, I’ll just do the best I can.”

Pickett’s state return will come in her only new event this season.

Opening her busy Sectional 4 schedule in the early morning triple jump, Pickett opened with a foul on her opening attempt out of four but moved into third at 10.50 meters on her second. She held that spot until the final round when she dropped to fourth and claimed the final spot.

Pickett continues to chase her season-best of 10.88 meters from her very first competition in the event to open the season, and she will have a chance to break Chandrika Brewton’s school record of 10.91 meters set in 2008. Pickett entered as the District 8 champion in that event and long jump, while placing fourth in high jump.

After the solid opening, Pickett ended up 1-for-3 — a somewhat surprising outcome after she qualified for state in Class 4 in both the long jump and high jump as a sophomore and medaled in the latter.

Pickett placed sixth in the long jump at Class 5 Sectional 4 at 5.03 meters, just 12 centimeters out of fourth and 21 behind Park Hill sophomore Brooke Boehm’s winning mark of 5.24 meters. Pickett cleared 1.52 meters in the high jump as part of a three-way tie for fifth, unable to get to 1.57 to be part of a tiebreaker at that height.

Mitchell, Platte County’s other dual district champion, continued her breakout year in long-distance running, starting early in the day with the 1,600.

Mitchell again right in a tight pack at the front of a six-runner field but eventually separated herself behind Lee’s Summit West senior Makayla Clark, who won in 5 minutes, 24.87 seconds. Mitchell came in second at 5:26.39 and was about 3 1/2 seconds clear of third to easily make the state cut.

A year earlier, Mitchell ran the second leg of Platte County’s fifth-place 4×800 state relay and went was an alternate on the state runnerup 4×400. She gave up hockey in the fall to run cross country and debuted with all-state season, fueling her push into longer individual events in her second track season.

With the 4×800 not qualified for sectionals, Mitchell’s day started in the 1,600, and she looked energized running up front with Clark, the 800 and 1,600 champion and winner of four medals at state in Class 5 last year.

“I used (the break), definitely mentally,” Mitchell said. “I told myself, ‘I could’ve been running an 800 before this, but I didn’t.’ I think that helped with the mentality.”

Rather than rely on one qualification, Mitchell stuck with the 3,200 in the early afternoon.

Raymore-Peculiar sophomore Ashlyn Smith immediately went to the front of the field in that race and went on to win in 11:27.60. Mitchell found herself in a pack of four runners seemingly competing for three additional state spots, but that bunch thinned to three and then two before she pushed into a clear second place.

Mitchell ran the 3,200 for just the fourth time and set a PR of 11:36.97 in her runnerup finish, continuing to put into question which event will be her best as she gains more experience in race strategy and execution.

“I just felt good going into my two-mile, and that’s the goal,” Mitchell said. “I kind of new I could trust my kick, you know? If they did come up on me, I was ready to fight for my spot. Honestly, I have no idea. I’d like to do them both, and I don’t know what my best race will end up being.”

A year earlier, Platte County sent all four relays to state in Class 4 with three bringing back medals, but only one of three at Class 5 Sectional 4 advanced this time around.

The 4×200 didn’t go as low as its qualifying time from District 8 but sneaked into the top four while running the Mand-Smith-Davey-McBratney lineup for just the third time this season. The Pirates came in fourth at 1:48.34 with McBratney’s anchor leg helping to fend off Park Hill in what ended up only a seven-team field.

Mand started the race with nerves after the head official called off the original start pattern due to an equipment issue. Oak Park then false started, eventually sending Mand and the other first runners back into the starting blocks for a third time.

“I came in here with kind of high expectations that we were going to place,” Mand said. “But that 4×2, I was really proud of us. We really put it out there. It kind of got my adrenaline going because I was ready to just get the race over with. It did kind of shake me a little bit. I think without all those starts, we can get a better time for sure.”

Platte County’s season-best in the 4×200 sits at 1:46.79 came with Mand, Smith, Davey and McBratney in a runnerup finish at District 8. They are just off of last year’s sixth-place Class 4 state team 1:46.43 but still well off the 2018 school record of 1:44.41 set by Britteanna Curry, Karleigh Wise, Haley Luna and Isabelle Geddes. The Pirates will have more time to work on handoffs this week with Smith and Davey no longer obligated to soccer after a 1-0 loss to Smithville in last week’s Class 3 District 8 championship game.

“We’re going to probably do handoffs all week, hopefully run a couple of full ones just to solidify things,” Mand said. “To be honest, I don’t even know what our PR is. All the times kind of melt together, but all I know is we’re going to do good.”

After placing third at District 8, Platte County’s 4×100 of freshman Payton Stadel, Mand, Smith and freshman Makayla Turner faded to seventh at Sectional 4 in 52.06. The Pirates were over a second off of the previous week’s time but would have needed to go well below that season-best to make the top four on Saturday. Mand and Smith were part of last year’s school record quartet that missed a state medal by just one spot.

The real — and eventually surprising — drama ended up coming in the 4×400 to close the meet.

Davey, Smith and Mand put Platte County in sixth place after the first three legs. However, while leading the race, Liberty North botched the final exchange and ended up disqualified despite the anchor picking up the baton and attempting to finish the race. McBratney briefly moved the Pirates into fourth but ultimately crossed the finish line still in sixth.

However, the eventual disqualification meant Platte County finished fifth at 4:19.98, and just a little more than a half second back of a state spot. Raymore-Peculiar took fourth at 4:19.36. The Pirates were 2 seconds slower than the prior week’s season-best at District 8 when they placed fourth.