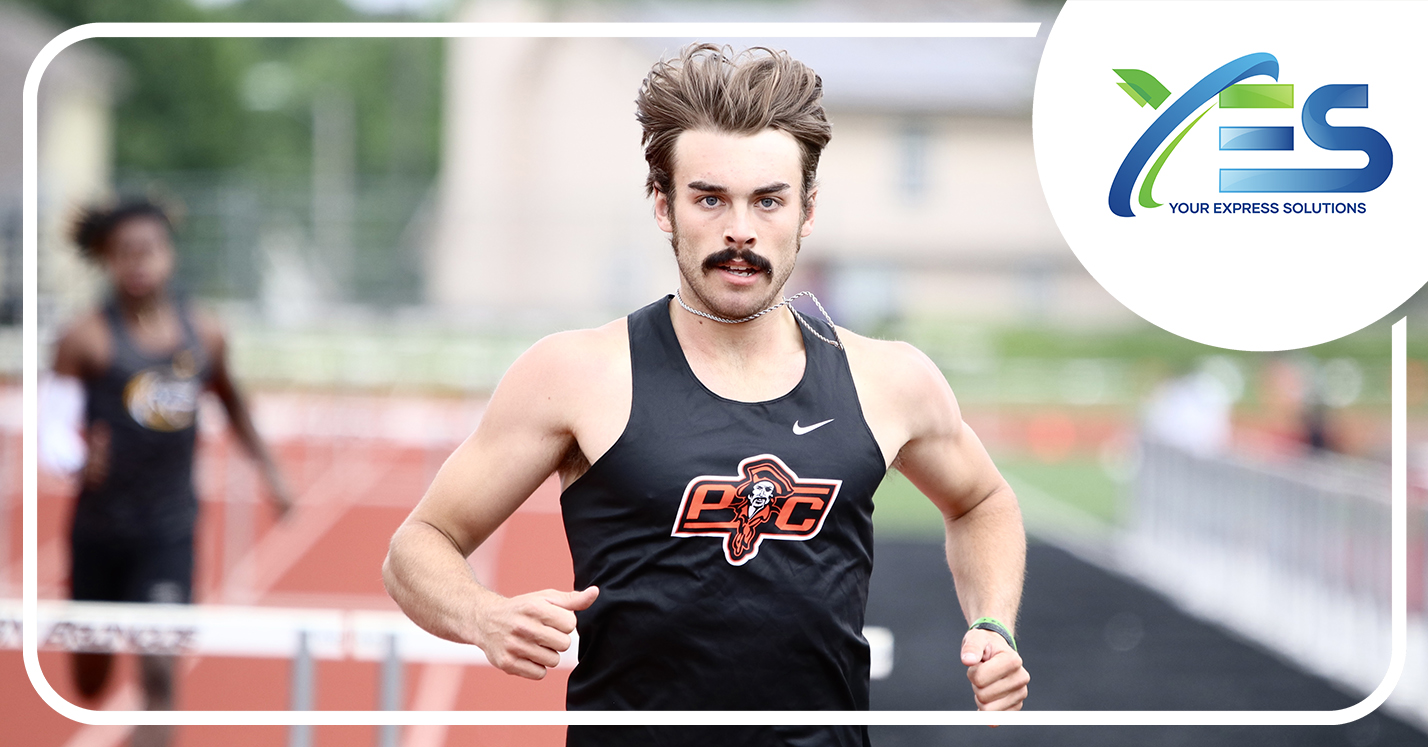 LEE’S SUMMIT, Mo. — Not one for overt displays of emotion, Chandler Steinmeir eventually heeded the appeals from his exuberant teammates.

Platte County’s senior hurdler first flashed a victorious smile then steadily nodded his head before giving a conspicuous stroke of his well-cultivated and distinctive mini-horseshoe mustache following an altogether unexpected victory in the 300-meter hurdles race in the Class 5 Sectional 4 meet Saturday at Lee’s Summit North High School. Chandler Steinmeir unexpected victory. Everyone wanted to credit the power of the facial hair after he went under 40 seconds in the event for the first time in his career, topping Lee’s Summit West senior and returning Class 5 Missouri State Track and Field Championships individual champion Bryan Haney in the process.

“There’s not another feeling like it,” said Steinmeir, who earned his first state berth and captured Platte County’s only sectional title — boys or girls. “It’s insane, having this much support from your coaches, teammates, friends and family as soon as you cross that finish line.”

The top four finishers from the prior week’s District 7 and District 8 meets competed in all events with the top four again advancing on to state.

Platte County sends two individuals and one relay to this weekend’s Class 5 meet in Jefferson City after in the program’s first season as part of Missouri’s largest classification. The Pirates moved up from Class 4 for this season and faced a more difficult path as a result.

In addition to Steinmeir, Platte County senior Victor Sewankambo advanced in the 100 with another personal-best sprint then anchored a 4×100 team that also included seniors Trevor Scott and Cole Rhoden and junior Nate Walls to another school record time. Rhoden will also be a first-time qualifier, while Walls will compete for the Pirates at state for the first time.

“It wasn’t just a me effort; it was a team showing up to practice at the same time, doing what coaches tell us to do exactly,” Sewankambo said. “Whether that was in the morning or on the weekend when we wanted to hang out with our friends but couldn’t’. We all wanted this, and I’m glad we all got it, you know?”

Previously a sectional qualifier in the 110 hurdles as a junior in Class 4, Steinmeir entered Saturday having placed third in Class 5 District 8 and drawing a difficult assignment — Lane 1 on the inside of the track. He emphasized the importance of a faster start than normal and then executed on the plan in the race.

Steinmeir went over the first hurdle before the rest of the field and the second and so on, eventually opening up a large lead. He crossed the finish line comfortably in 39.99, just eclipsing the 40-second mark after previously running his best time in the regular season as a junior (40.05).

Haney finished second at 40.45, allowing Steinmeir to take a unique victory considering his position on the track.

“All week at practice, I made that my main focus,” said Steinmeir, who ran 41.84 at districts in a comfortable race that didn’t require him to push at the finish and hadn’t run faster than 40.46 yet this season. “Coming out here today, I made sure to push everything out of those blocks. I always try and do that but had to give a little bit extra today. I definitely think it helped a lot.

“(Lane 1) definitely got in my head a lot at the beginning of the race. It didn’t do me any good in my head, but as soon as I got out of those blocks, I just pushed it to the back and just ran, ran as hard as I could. It was really surprising when I came across the finish line first.”

Ineligible to start the season, Steinmeir has only run four 300 hurdles races as a senior and even sat out the Suburban Conference Blue Division Championships due to injury in the final meet of the regular season. He had shown he potential throughout his career for this type of performance but finally made good on the opportunity in his final try.

“I feel like I could’ve gone a little faster if I’d been pushed a little harder,” he said. “One thing I was really worried about was my finish there and if I’d hit a wall and lose energy and breath and Bryan Haney would catch back up to me, but it all turned out good and all turned out in my favor so I’m really happy with the way it happened.”

Sewankambo had already punched his state ticket with a memorable performance in the 100 when he took the track for his second running event. This left the UMKC signee with the pressure of anchoring his Platte County 4×100 teammates to a return berth. Entering off of a season-best performance a week earlier at districts, the Pirates were even better this time around with the same lineup of Walls at leadoff, Scott second, Rhoden third and Sewankambo for the final leg having another full week of practice on handoffs.

Platte County went from third at District 8 in a school-record 42.99 to tying for second at Sectional 4 in another school record of 42.89. The Pirates were ultimately determined to have beat Park Hill South for the runnerup spot by thousandths of a second.

District 7’s Lee’s Summit North won the race in 42.69, and Platte County beat both Park Hill and Park Hill South after finishing behind them a week earlier.

“Personally for me, that was the only pressure I felt because I wanted to go to state with my friends,” Sewankambo said of the 4×100. “Like I said before, it’s all about the chemistry. State is never the same without your friends, without your teammates. They make the memories; they bring the support.”

Platte County set the school record in the 4×100 in 2021, as well. Scott and Sewankambo along with senior Carter Salzman and junior Garrett Smith-Dean ran 43.57 at the Class 4 Sectional 4 meet to topple a mark that had stood since 2009. However, the Pirates didn’t end up having all four runners back with Salzman dealing with a season-long injury that limited him to pole vaulting and Smith-Dean no longer on the roster.

That opened up spots for Walls, who ran on Park Hill’s seventh-place Class 5 4×100 team last year for before transferring to Platte County, and Rhoden, a sectional qualifier in the long jump as a junior. The Pirates understood the difficulty of returning to state after last year’s Class 4 trip especially with the shuffles.

Sewankambo and Scott remember Platte County’s run last year in the state preliminaries when Salzman and Scott miscommunicated on the opening handoff. The issues only compounded, and the Pirates were ultimately disqualified for an exchange outside the zone, although they were well off the pace regardless.

“Like I said earlier this season, just because we haven’t (hit a low time) this doesn’t mean it’s the end of the world for us,” Sewankambo said. “I came to keep the promise because we’re going to state now, which I think a lot of people did not visualize us doing, but we somehow managed to pull it off, so I’m impressed with ourself. My assumption came to pass. We got it down; we worked hard.

“Definitely feel like we have unfinished business, especially in the 4×1 after what happened to us (last year at state).”

Sewankambo emerged from anonymity as a junior for a standout season but ultimately didn’t reach Class 4 Sectional 4 in the 100. He continued to lower his times in the event this season and continued to be at his best in the postseason.

For a third straight individual race, Sewankambo set a personal best, this time at 10.86 to place fourth in the Sectional 4’s competitive 100 field. He went 11.02 in the District 8 preliminaries and then won the final at 10.88. He was second at Sectional 4 behind North Kansas City senior and District 8 runnerup Keilan Powell, who turned in a 10.73 with Oak Park junior Tory Lanham second (10.75). Lee’s Summit North senior Donnell Dye also ran 10.86 but topped Sewankambo by thousandths of a second for third.

Sewankambo will have a difficult path to advance out of preliminaries this weekend, but the progression in times will be encouraging.

“At this point in my life and my career, I’m so used to surprising myself because I always surpass my limits,” Sewankambo said. “But sports is always going to be sports. Somethings are going to be shortcomings; others are going to work out for you. We’ve got to live day by day, work hard, try to improve as much as we can until state gets here.”

In addition to the 4×100, Sewankambo went to state in the long jump a year ago but couldn’t earn a return in that event. He placed seventh at 6.50 meters, just off of his previous week’s effort of 6.57 meters. Only 8 1/2 inches separated him from second place, and his PR of 6.78 would have placed him second on the day behind winner Joshua Manning, a senior from Lee’s Summit.

Sewankambo was the only returning individual state qualifier this season for Platte County and will end up going back, even if in a different event.

“I knew it was going to be good competition,” Sewankambo said. “I actually outdid myself on multiple occasions with the 4×1, the 100, and just because one event didn’t go as planned doesn’t mean it’s the end of my season. I’m going to state, and I need to focus on that right now.”