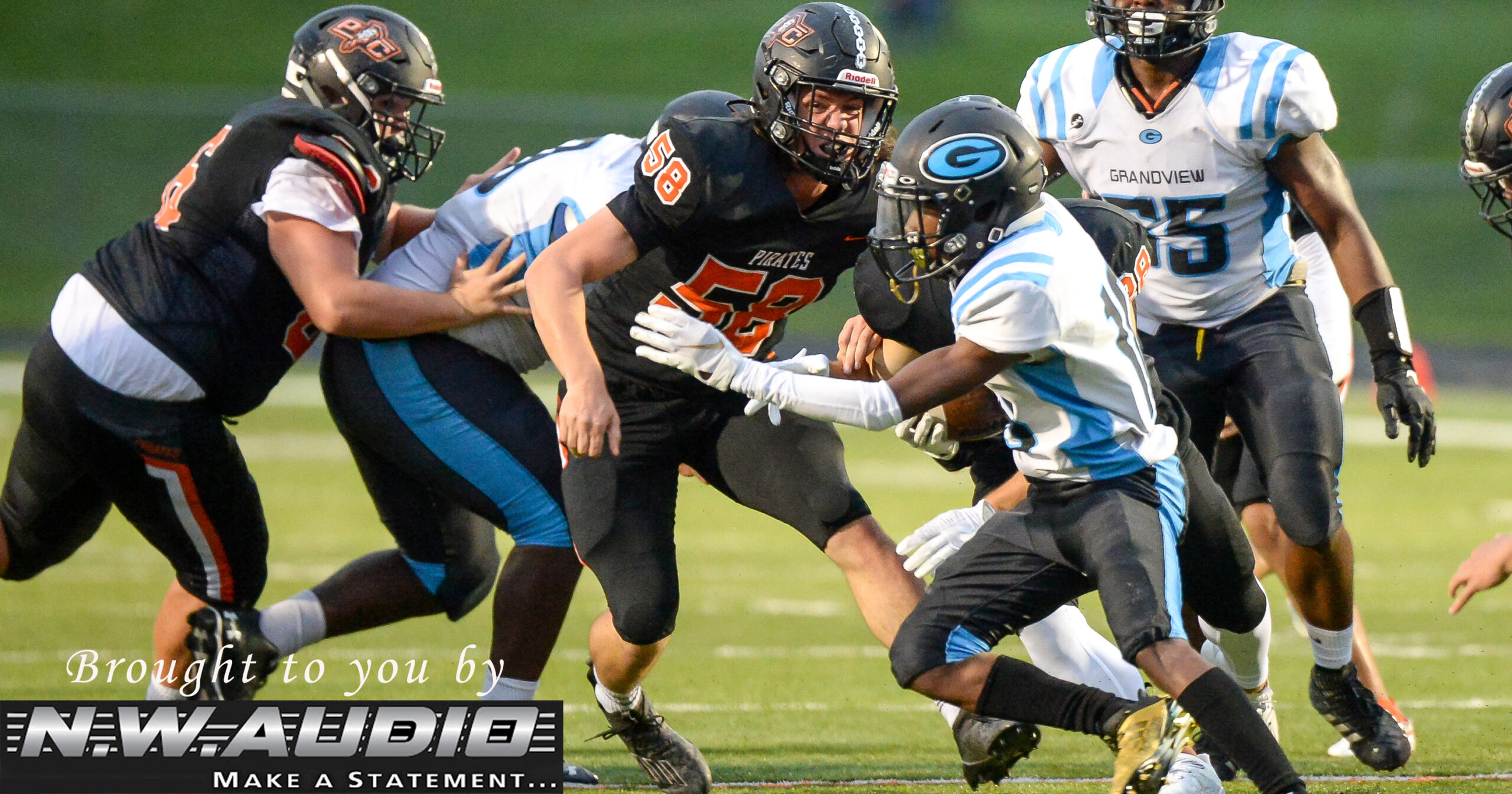 Alex Stearns plays with a relentless effort that complements any level of talent, a combination that will always eventually shine in a big moment.

On Friday at Pirate Stadium, Platte County’s undersized senior defensive tackle put up career numbers with four tackles (one for loss), three sacks, a forced fumble and numerous other disruptions that won’t show up on any stat sheet. He led a dominant effort from the Pirates’ defense that keyed a 35-12 revenge victory over Grandview and canceled out any potential disappointment from an offense that vanished after halftime.

Stearns shined from start to finish and reemphasized what makes him a key cog in Platte County’s pursuit of a repeat deep playoff push. As a junior, he suffered a severe elbow injury on literally the first play of the season while covering a kickoff. The ligament tear necessitated offseason surgery, but Stearns returned after missing seven games and noticeably changed an already solid defense for the better during a postseason run that ended with a loss in the Pirates’ first-ever Class 4 Show-Me Bowl appearance.

“He plays with so much effort, almost controlled recklessness. He’s going to the right spot, and when he gets there, he’s coming with a lot of energy,” said Utz, who added that Stearns was just getting up to full speed as the 2019 season concluded. “It doesn’t matter if it’s the first play of the game or the 70th play of the game; he’s playing with the same amount of speed. He’s just a tough matchup for almost anybody.

Platte County improved to 3-0 and 2-0 in the Suburban Conference Blue Division by comfortably topping an often-frustrating foe. A year ago, Grandview took advantage of an offensive lull in the second half from the Pirates score a 29-23 upset victory. The loss in the regular season finale forced Platte County to share the conference title with Smithville and created some doubt about their postseason chances.

This time around, touchdown runs of 21, 7 and 1 yards for senior running back Cayden Davis, plus a 5-yarder on the ground for junior running back Ben McDaniel — the second total TD of his career and first on the ground — were enough to help Platte County build a 35-0 lead. Despite one miscue on defense and another on special teams, the Pirates were able to avoid a similar fate this year and avenged a 2019 loss for the second time in three weeks.

“We were thinking about it all week,” said Davis, who finished with 42 yards on 10 carries. “Because we lost last year, we really wanted to go out there and get them. We put our foot on the throat; we just have to finish it next game.”

Platte County did remain stuck on 35 points for a third straight week and still has not put a running clock on an opponent despite three relatively comfortable wins — 35-17 over Park Hill South, 35-14 over Kearney and 35-12 over Grandview. Notably, Grandview’s defensive pressure and cover skills limited the Pirates’ passing offense for the first time with senior quarterback Chris Ruhnke finishing 11 of 24 for 169 yards and just one touchdown, a 3-yarder to junior Cole Rhoden late in the first quarter.

In all, Platte County had just 232 yards of offense even with senior wide receivers Dayton Mitchell and Colby Rollins back from injury to give the Pirates their full complement of weapons. Mitchell had three catches for a team-high 61 yards, while Rhoden had four for 55, sophomore Carter Salzman two for 38, Rollins just one for 12 and Davis one for three.

Mitchell missed the entire win over Kearney due to a leg injury suffered in practice, while Rollins had his snaps limited and didn’t play after halftime in the game due to a minor wrist injury.

“I don’t know how much of it was Chris; I just think on the whole everything was just a little off,” Utz said of the offense which also played behind the same offensive line setup as the week before — senior left tackle Jesse Schillinger, senior left guard Trey Butcher, senior center Grant Gomel, junior right guard Joe Nicholson and senior right tackle Colby Guffey.

Platte County displayed its normal high-powered offense on the opening drive with a 37-yard kickoff return from sophomore cornerback Garrett Smith providing solid field position. Ruhnke had a 22-yard pass to a leaping Salzman to key the 51-yard drive, and Davis finished it with a 21-yard romp around right end to make it 7-0 after just 1 minute, 31 seconds.

The defense then started to provide the offense in a sense.

Late in the first quarter after a punt pinned Grandview deep in its own territory, Stearns provided his signature play of the night. He beat an interior lineman to disrupt a pass play and then chased down Bulldogs quarterback Dwight Sims from behind, knocking the ball loose on a sack. Platte County senior defensive end Forrest Boynton came out of the scrum with the ball, and on the next play, Davis scored from 7 yards out to double the lead in a matter of moments.

The big play reminds Stearns of what he missed due to last year’s energy, and not giving up on the play shows his mentality on every snap.

“For me, football is life, and I love this sport,” said Stearns, listed at 6-foot-3, 205 pounds. “I have to play the cards I get, the cards I have. I have lots of speed, and people say I have a lot more power than it looks like I do. I’ll never forget (the injury) happened — never take for granted all the time you have. I lost a lot of time, a lot of games. You can’t take it for granted.”

“It felt really good, but I’ve got to give credit to my team because they were there to help me get the plays I get and I help them to get the plays they get.”

On the next drive, Grandview faced a third-and-18 when Platte County junior defensive end Jaydon Walls flushed Sims right, and Boynton ended up forcing another fumble. Pirates junior linebacker Trevor Scott picked up the loose ball and appeared to return it 9 yards for a touchdown, only to have the official rule he stepped out at the 1.

“First off, I thought it was an incomplete pass, picked it up, saw the running back running at me, tried to get the ball in the end zone but came up a yard short. I’m a little sad,” said Scott, who finished with two tackles and the fumble recovery.

Two plays later, a scrambling Ruhnke found Rhoden in the end zone for a 3-yard touchdown to put Platte County up 21-0 with 1:52 left in the first quarter.

Ruhnke’s biggest pass plays set up the next two scores. He hit Rhoden down the middle for a 34-yard gain on the Pirates’ first drive of the second quarter, and if not for a stumble, Rhoden would’ve had his second score of the game and third in two weeks. Instead, McDaniel, who finished with 17 yards on 12 carries, ran for 9 yards on the next play and a 5-yard touchdown to cap the drive.

Mitchell, who missed all of last week, had a highlight-reel 44-yard catch-and-run down the home sideline that finished with the officials questionably ruling him down at the 1 late in the second quarter, and Davis made it 35-0 with his 1-yard plunge just 3:47 before halftime.

If not for a miscue, Platte County would’ve had a shot at a shutout.

Two defenders collided allowing a long pass from Sims to find senior wide receiver Reggie King behind the defense for a 55-yard score on the Grandview’s final drive of the first half. After a failed two-point conversion, the Bulldogs were within 35-6, and Rhoden missed a long field goal try in the final seconds, sending the game into halftime on what ended up being the last best chance for points for the Pirates.

“Defense played well early on, gave us some short fields. We were able to get points off of it, get a nice cushion and then hold on,” Utz said.

Platte County limited Grandview to just 217 yards of offense and ended up with only 114 yards rushing on 35 carries when nine sacks were factored into the stat sheet. Boynton had two of the sacks and added five tackles, while Scott, senior defensive tackle Keaton Smith, senior linebacker Tryce Brooks and junior defensive end Chandler Steinmeier had one apiece.

Brooks in particular came up big, as Platte County committed turnovers on three of their first four drives of the second half. Brooks came up with the first interception and first sack of his career to stop two Grandview drives that were in Pirates’ territory at the time.

“The funny thing is before (Brooks) went in he said, ‘I’m getting an interception.’ Next play he does and gets an interception,” Scott said. “He had a great game.”

Grandview’s other touchdown came on a 60-yard punt return for a touchdown from King late in the fourth quarter, and the Bulldogs failed on that two-point try, as well. Platte County ran out the clock from there, and the defense continued to lower the points allowed ahead of a Week 4 game with North Kansas City (2-1), which enters off of a loss to Class 5 Fort Osage. The two teams haven’t met since Platte County topped the Hornets 42-21 in 2013.

In addition to the sack numbers, Platte County junior linebacker Blaine Keuhn had three tackles (two for loss), junior linebacker Brody Fulk had four tackles, senior safety Luke Filger had three tackles and senior cornerback Landon Fulk had a pair of tackles while starting in place of injured senior Spencer Cupp. The other three tackles for loss on the night came from sophomore defensive end Chandavian Bradley, senior safety Tae Bailey and junior safety Cade Fowler. The deep, stingy big-play defense has the Pirates at 3-0 for the first time since 2015 despite having a pair of state semifinal runs in the four years since.

Stearns and the active defensive line would be at the top of the reasons for the solid start.

“I love them,” Stearns said. “Going to practice with them is amazing; they’re fun to be around.”

If given the chance, Platte County hopes to close out another win vs. North Kansas City, this time with more authority, and the Pirates have certainly shown the potential for a true blowout.

“We’ve gotten to that pinnacle point where you either close it or you let those teams linger,” Utz said. “And they keep lingering. We’re right there — right there — to finish, and we just don’t make the play to finish it. It comes with some learning; it comes with experience. It’s just something we’ve got to keep working on.”