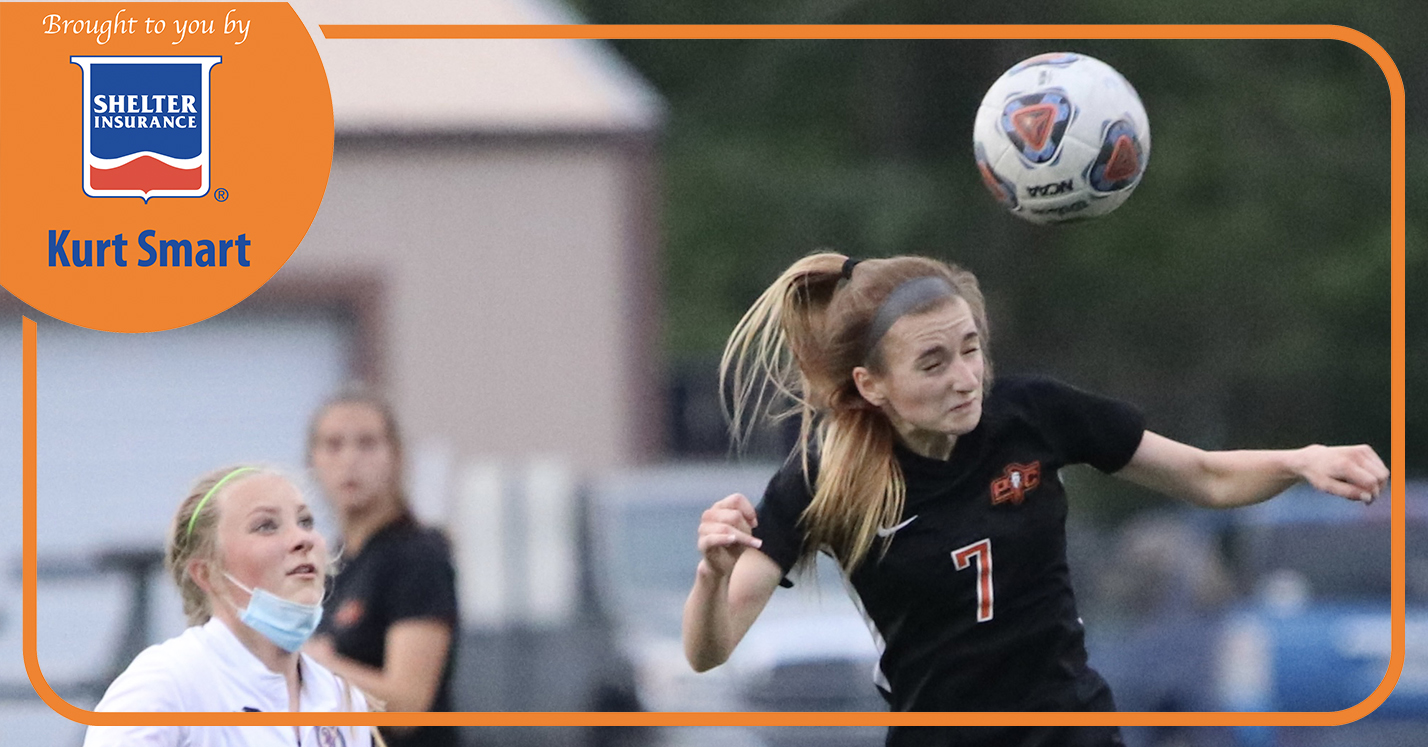 Coming off an irritating loss, Riley Smith didn’t take long to make her return to the lineup a focal point Monday night against Pembroke Hill.

Platte County’s junior leading scorer tallied a pair of goals in quick succession early in the first half, and the Pirates held on from there for a 2-0 victory at Pirate Stadium. Smith missed a game the previous week due to a toe injury, and Smithville took advantage in a 1-0 win that ended a 15-game winning streak.

Smith picked up where she left off against Pembroke Hill, providing the offensive spark Platte County lacked against Smithville. Her performance started what is now a three-game winning streak heading into Tuesday’s matchup with Grandview.

“That one really hurt, really badly,” Platte County junior midfielder Paige Chase said of the loss to Smithville. “Right away, right after Smithville, we’re ready to play them right now. I think everyone was just really excited to be back and just start working on getting better and preparing ourself for when we do have to go back and play them again.”

Platte County (19-2) continued to play without junior forward Aleah Dixon (knee) and senior goalkeeper Grace Neece (concussion) and junior forward Hannah Stone sat out after tweaking an ankle injury in the second half of the loss to Smithville. The injuries caught up to the Pirates for one night, but the depth and resilience of this year’s squad showed in the 13th of 14 shutout wins this season.

In the second half, Platte County senior goalkeeper Avery Krahenbill — now starting and playing both halves with Neece sidelined — made three of her five saves, twice denying what looked like point-blank chances for Pembroke Hill.

“We are very confident; we just have to keep (Krahenbill) healthy,” Platte County coach Ashlyn Brantley said. “She’s definitely able to play the full 80 mintues, and we have all the confidence in her.”

Platte County controlled the action early and deservedly broke through in the ninth minute when senior midfielder Allie Corbin cleverly played Smith open inside the box. Smith calmly finished the chance for the 1-0 lead on the Pirates’ second shot on goal at that point.

Smith doubled her account less than a minute later.

A high-bouncing loose ball settled at Smith’s feet, and she dribbled once before hitting a blistered right-footed shot from 21 yards out into the top right corner of the goal, beating helpless Pembroke Hill goalkeeper Allie Pierce. Smith has scored in all but five games this season, including both of Platte County’s losses.

“That was a good goal,” Chase said.

Platte County’s clear-cut offensive chances mostly dried up for the remainder of the first half with stagnant play that persisted until the end of the game.

Pembroke Hill started to hold firm in defense and even created some dangerous counterattack chances against Platte County’s defense. The Pirates continue to start senior centerbacks Ryanne Rhude and Emma Murray with freshman Alex Beeman still at right back, while senior Abbey Rolofson has seemingly wrested the starting left back job from sophomore Morgan Stewart for the time being.

Pembroke Hill never found a way to break the shutout.

“I think we did let off a little bit and we started chasing a little bit more than we needed to and got out of our shape, which caused a few more problems,” Brantley said. “(Pembroke Hill was) using that speed to their advantage a lot more that half and coming back and winning balls out of the air. I think they showed better that second half, giving us a bit more trouble.”

Platte County added chances back to back in the 67th and 68th minutes with Rhude heading over the bar on a corner kick and Smith unable to complete her hat trick. She attempted a shot after Pierce wandered off of her line but couldn’t corral the ball in the box, but the shot rattled off of a Raiders defender before being cleared out of danger.

Despite not coming up with a third game, Brantley praised the offensive play that led to the two goals with Corbin and sophomore Sloan Kassen featured more in the attack due to the injuries to Stone and Dixon.

“Even off of that, we moved the ball around, and it was just pretty going into those goals,” Brantley said.

Platte County senior midfielder Kylene Loy broke open he scoring early in the first half, and Smith scored the next two, making it 3-0 in the 22nd minute. Murray’s first assist came moments later with Rhude and freshman Marissa Orellana both in the area. Orellana was credited with the goal.

Raytown South scored before halftime to make it 4-1, but the momentum didn’t carry over.

After an own goal made it 5-1, Smith completed her hat trick by hammering in a rebound off her own missed shot. Murray then set up Smith and freshman Addison Bradley for headed goals to complete the scoring.

The Pirates recorded a second clean sheet in three games and won their third straight game with Thursday’s shutout in Kansas City.

Platte County freshman Carmen Gentilia and Smith opened the scoring with back-to-back goals in the earlygoing, and Murray set up Smith’s second with another corner kick. Smith would go on to record a second straight hat trick to finish the week with nine goals in three games.

Platte County junior Haley Brunner and senior Mallie Fine also tallied goals, while Kassen added a pair in quick succession during the nine-goal first half. Kassen’s second flew in from about 25 yards out.

With the win, Platte County improved to 9-1 in Blue Division games, needing victories this week over Winnetonka and Grandview to finish off an outright conference title. The Pirates’ last Blue Division championship came in 2009.