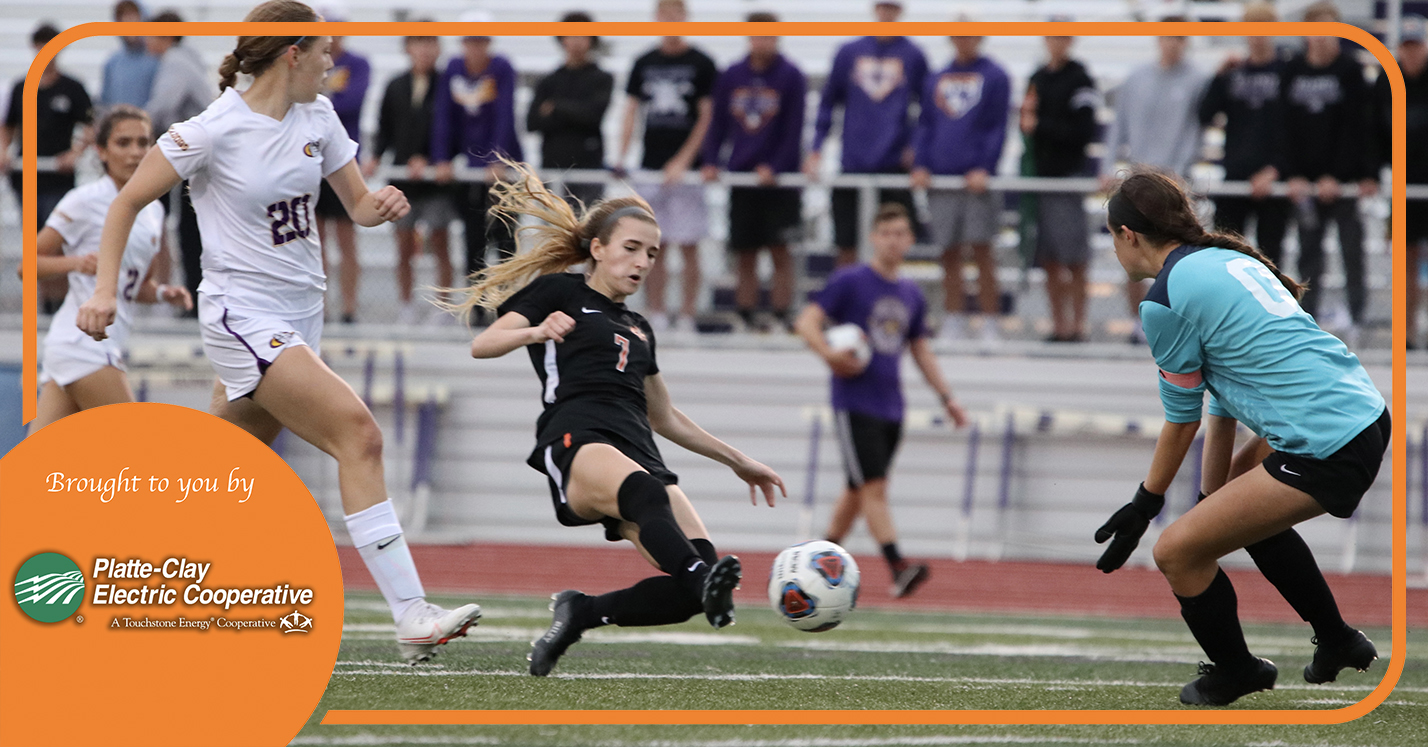 KEARNEY, Mo. — Riley Smith took off on a sprint, determined to reach the ball before Kearney senior goalkeeper Lily Ellis.

Platte County’s junior scoring dynamo won the impromptu race, nudging the ball with her right foot into an empty net. The dramatic golden goal off of a scramble for a loose ball came in the 86th minute — the sixth minute of sudden-death overtime — of a 2-1 victory for the Pirates in Wednesday’s Class 3 District 16 championship at Kearney High School.

In the aftermath, Platte County players rushed to pile into a celebratory scrum, while inches away, Ellis remained on the turf in pain. Smith didn’t come away unscathed either with the players clattering into each other awkwardly moments after Smith came up with the winning touch.

Any lingering pain didn’t phase Smith after she scored both goals to send Platte County to the playoffs for the first time since 2016,

“Pretty much the Platte County motto is to sacrifice your body whether you like it or not so I kind of just decided to give it my all, hope for the best and luckily it went in,” said Smith, who has scored in all but five games this season for Platte County. “Especially in the overtime, it was a really exciting moment.”

Most coaches agree there’s a certain difficulty in beating a good team twice. Increase the challenge when asked to win three times against that same team in one season.

Much less data exists on going 4-0.

Platte County (23-2) wound up in that exact scenario with the season on the line, playing Kearney for a fourth time. The Pirates entered 3-0 in those matchups with a 1-0 win in the third-place game of the season-opening Platte County Invitational, a 2-0 win a week later and a 3-1 triumph in the Suburban Conference Blue Division rematch a few weeks back.

Smith made most of the difference, scoring five of Platte County’s eight goals in the four games against Kearney. The Bulldogs had not lost in the rivalry series since 2011 prior to this season.

“It was a concern (playing Kearney a fourth time), but I know we have confidence in these girls and what they can do,” Platte County coach Ashlyn Brantley said. “We knew the whole time they were able to do it. We just had to show up for both halves. We knew it wasn’t going to be easy — by any means — that we’d have to work for it but we knew they could do it.”

Continuing what will go down as one of the best two seasons in program history, Platte County next travels to Van Horn for a 6 p.m. Class 3 sectional matchup Tuesday in Independence.

“This group, they’ve been going throughout the season and just continuing to just blow our minds,” Brantley said. “We’re always happy to play more games — you know, you’re just thinking one more game, one more game. That was our mentality going in, getting to practice on Thursday. It’s definitely a good thing to be in this position right now. It’s been a while, and we’re excited.”

Almost identical to the most recent matchup, Platte County went into halftime down 1-0 to Kearney in the district title game. The Pirates were just two minutes into the second half when Smith provided the equalizer.

Platte County senior center back Ryanne Rhude sent a through ball that opened up Smith in between two Kearney defenders. She held off Bulldogs sophomore Moira Olberding while hitting a well-struck right-footed shot that beat Ellis to her right in essentially a one-on-one situation.

Overall, Kearney led for just five minutes of game play — three in the first half and two in the second sandwiched around the 10-minute halftime.

“It was really important to me,” Smith said. “I figured we’ve got to get ourselves back in the game, get motivated.”

Kearney actually ended up with most of the best chances to go back in front in the final 38 minutes of regulation. The Bulldogs had two immediate opportunities at an answer, sending a free kick in a dangerous spot wide of the goal and then having a shot from in tight miscued and deflected out by a defender without making it on target.

Platte County senior goalkeeper Avery Krahenbill, now the starter and playing all 80 minutes with fellow senior Grace Neece (head) still out injured, made just four saves. She endured a few nervy moments in the closing minutes on another free kick — this one 19 yards out on the left corner of the 18-yard box — and a pinging corner kick that created some tense moments.

In addition, Rhude, who forms a steady center back combination with fellow senior Emma Murray, left the field for an agonizing few minutes after taking a ball to the face before returning.

“I was saying the other day, I’m not sure if I can keep doing this as I get older with the stress levels,” Brantley said. “Yeah, it was concerning those last few minutes because in soccer anything can happen in 10 seconds.”

Platte County’s best look at a potential winner came in the 67th minute on another quick counterattack that proved to be the Pirates’ most effective offense. Smith again worked behind the defense and fired a right-footed shot similar to the one from the first goal from about 14 yards out that looked destined to go across the face of goal and tuck into the top left corner.

Instead, Ellis made the best of her six saves, reaching out her right arm to palm the effort away.

“That goalkeeper is crazy good,” Smith said. “I knew she was going to get something like that. It still happened, so it was a good opportunity — not a wasted opportunity.”

Instead, the teams went to overtime, which consists of two 15-minute halves of sudden death with the threat of penalty kicks looming.

Platte County came up with the winner on another tight counterattack with senior midfielder Kylene Loy winning the ball in Kearney’s half in the 86th minute. She fed a short pass to junior forward Hannah Stone, who had been a pesky nuisance all game but unable to finish any of her chances.

Stone played the ball into space, and Ellis’ decision to rush off her line proved fatal to Kearney’s season.

“One of them at some point has to pay off,” Brantley said of her thoughts about the repeated chances in behind the defense. “Especially in the second half because in the first half we were playing more direct. During halftime, we talked about playing those angles, and they were getting to them, so yeah, one of them was going to have to fall in our favor at some point.”

After Platte County made almost nothing out of multiple free kicks in the attacking third in the opening minutes of the game, Kearney nearly took the lead in the 18th minute. A free kick played from a spot out near the corner created havoc in the box with both Krahenbill and Rhude unable to clear the ball.

A Kearney header from senior Faith Mick pinged off the post and away from danger.

Smith answered a minute later for Platte County sending a left-footed shot from 17 yards out that dipped just over the bar and out for a goal kick. The Pirates then brushed the crossbar in the 27th minute when sophomore forward Sloan Kassen sent in a speculative long ball that Ellis awkwardly tipped off of her own cross bar before smothering the ball without giving up a rebound chance.

Kearney’s opening goal in the 37th minute came against the run of play with a miscue at the back allowed senior Caysi Brown a one-on-one opportunity against Krahenbill. She cleanly tucked a left-footed shot inside the far post to make it 1-0.

“We’ve been in this position before, and that’s what I reminded them of at half,” Brantley said. “We’ve been down here, at this place, against this same team, and we were able to come back so our heads better not be down; we better keep our heads up — keep working, keep playing. We’ve been here before so we can do it again.

After immediately taking the lead back the last time in this situation and added an insurance goal late, Platte County needed extra time this time around but prevailed again. The Pirates take a seven-game winning streak into the sectional matchup with Van Horn looking for their first playoff win since a program-best fourth-place Class 2 state finish in 2010.

All time, Platte County is 3-8 in seven playoff appearances — two of those to reach the state semifinals 11 years ago. The most recent district championship season ended with a first round loss in 2016.

Stone scored the game winner in the 64th minute, helping the Pirates advance out of a difficult District 16 semifinal Monday in Kearney.

Platte County opened the season with a 3-1 win over St. Pius X, building a three-goal advantage before giving up a late goal. This time around, the Pirates were up 1-0 at halftime on Smith’s marker in the 23rd minute.