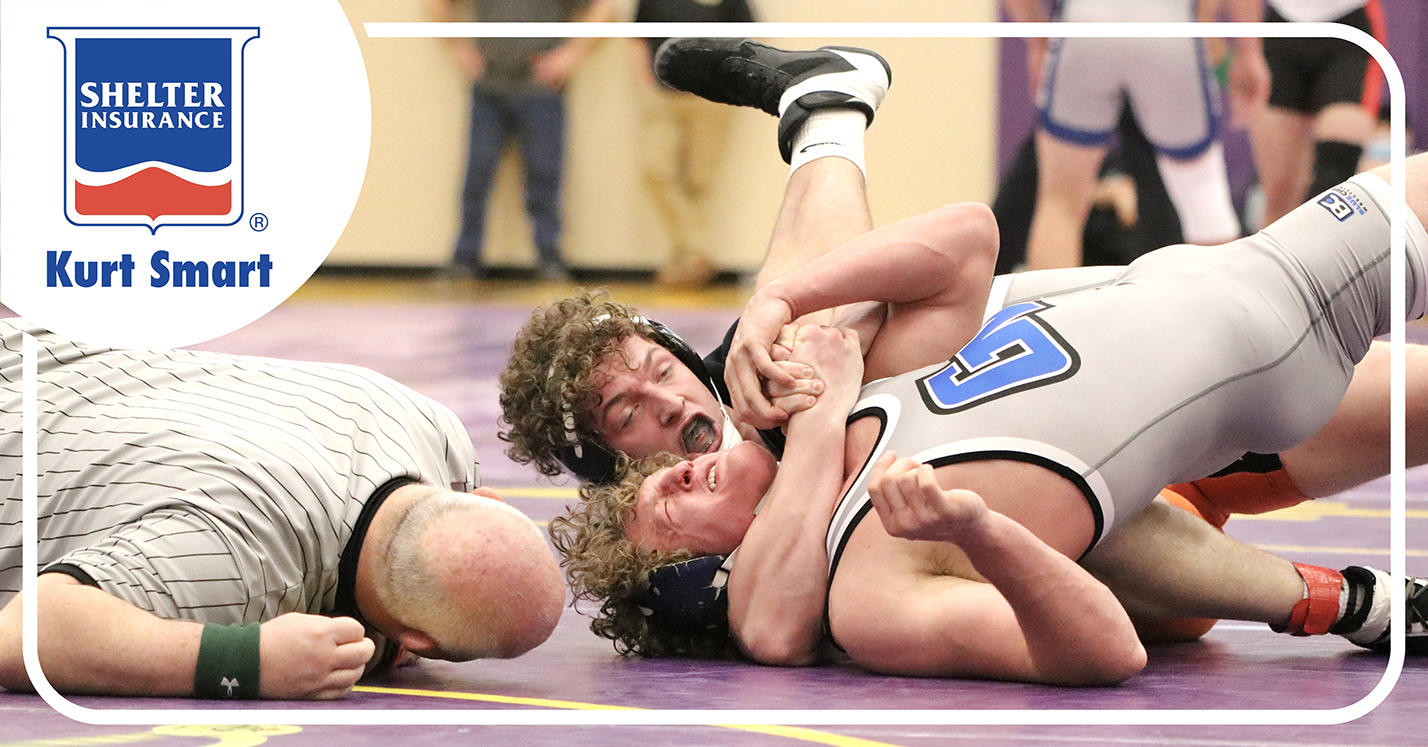 All signs point to the momentum culminating this season.

Platte County undertook a minor rebuild in a three-year run considered successful to most other programs. The Pirates now appear to have the lineup capable of seriously reentering the team trophy picture in the Class 3 Missouri State Wrestling Championships with the return of six previous qualifiers — seniors Eli Rocha, Jaydon Walls, Blaine Keuhn and Jared Parsons and sophomores Caden Hulett and Jake Fernandez. Rocha, Walls and Keuhn have all made multiple trips to state and have at least one medal to their credit.

“Our lineup should be really solid this year,” Platte County coach Reggie Burress said. “I feel like we’re as solid as we’ve been in quite a few years.”

Platte County has not produced a state finalist or state champion since Cody Phippen and Sage Smart both won individual titles in 2018. The Pirates finished third as a team that year for the program’s 15th state trophy but have mostly been out of the chase since then, falling to an uncharacteristically low 33rd place in a tumultuous 2019 season when Rocha won their only state medal — injury defaulting to sixth at 132.

Walls (injury) and Keuhn (personal decision) were both out that season but returned for their junior seasons.

With those two in the fold, Platte County sent five and medaled three in a unique one-day setup for the state tournament that featured a reduced number of qualifiers due to COVID-19 restrictions. The Pirates ended up with seventh in the final standings with 52 points — 26 back of fourth-place Lebanon for the final trophy.

All five qualifiers contributed at least one win to the rejuvenate state effort after Platte County won the District 4 team title with a late rally, sending 12 of 13 participants to Sectional 4 where no team standings were kept.

“I’d say if we’re not battling for some state titles this year then something went wrong,” Burress said, “because there’s kids who should put themselves in a spot to win state titles this year. Teamwise, it’s right there. All they’ve got to do is go get a trophy. We’ll see how it all shakes out.”

Platte County loses only three seniors from last year’s postseason roster in Hunter Burge (132), Drake Lacina (160) and Jesse Schillinger (220). Lacina and Schillinger were previous state qualifiers who did not make the cut in their final year.

That means Platte County will have the six returning state qualifiers plus Class 3 Sectional 4 qualifiers senior Ben McDaniel, junior Mar’Quese Brown and sophomore Brody Lueders back in the fold. The rest of the lineup will consist of lesser-known to unknown commodities and a pair of promising freshmen.

“Top to bottom, we should be pretty strong,” Burress said. “I’m excited. The kids are excited.”

However, the key to Platte County’s success will undoubtedly be the decorated returners and the potential for multiple state finalists. All five of the Pirates’ state qualifiers were Sectional 4 finalists, and two of the three district and sectional champions medaled at state.

Rocha enters his senior season at a more sleek 138 pounds as a three-time District 8 champion and three-time state medalist, having gone from fourth as a freshman to his injury-induced sixth-place as a sophomore to third a season ago. He finished 40-1 last year, suffering his first and only loss in the 145 semifinals to Neosho’s Eli Zar.

A state semifinalist twice, Rocha now has one final shot to earn the state championship bout opportunity that has eluded him thus far in an incredibly decorated career.

Walls took a much more adventurous route to his third0place state medal last season — the first of his career. A district runnerup at 170 as a freshman, he went 1-2 in his state debut, and a shoulder injury from football cost him all of the 2019-2020 season.

After a dominant postseason run that included district and sectional titles at 195, Walls dropped his state semifinal by a 9-3 decision to Neosho defending state champion Jeremiah Larson, who went on to lose the finals match to Grain Valley’s Hunter Newsom. Walls dominated Newsom a week earlier in the Sectional 4 championship match.

Walls came back to win his third-place match at state despite suffering a temporarily debilitating ankle injury in what ended up an 11-3 major decision over Webb City’s Jacob Ott, who trailed 10-2 at the time of the injury. in unique — and painful — circumstances. He led Webb City senior Jacob Ott 10-0 late in the second period before an ankle injury forced him to us all 2 minutes of his injury time.

Despite being in obvious and noticeable pain, Walls opted to stay in the match with a 10-2 advantage after giving up a reversal late in the second period. He had collected five near-fall points immediately prior before suffering the injury during Ott’s reversal.

Walls had potential to be at 220 but now looks more likely to remain at 195 or possibly drop to 182.

Keuhn also went 1-2 at state as a freshman qualifier before opting to take a season off as a sophomore. Despite the lost mat time, he returned and claimed a district title at 170 and went on to place fifth at state and finish 35-6.

To win his place match, Keuhn avenged two of his prior losses, including the Sectional 4 final, with an OT win over Belton’s Zach Attebury. Keuhn slots right back in at 170 pounds this year.

All three returning medalists should be in the state title conversation with Rocha and Walls likely to be predicted finalists to start the year.

“I’d say we left a couple out there with Walls getting hurt his sophomore year and Blaine not wrestling, I’d say that put us back a year,” Burress said. “Now, I think we’re where I thought we’d be last year. I’d say it hasn’t been a great experience at the state tournament. We could’ve done better.”

Hulett and Fernandez will provide strength at both ends of the lineup while looking to earn their first state medals.

A district runnerup at 106 as a freshman, Hulett projects to remain at the lowest weight and should again be ranked after going 34-8 a year ago. He lost his state quarterfinal to Neosho’s eventual state runnerup Raymond Hembree, who is incidentally projected out for the season due to injury.

Hulett ended up losing two straight and bowing out after an otherwise successful season.

Fernandez won district and sectional titles to become the only freshman qualifier in Class 3’s 182 state bracket but lost his opener and also ended up going 1-2. After finishing 30-4, he moves up to 220 pounds as an expected sophomore contender for a state title.

The unique postseason format drawn up last season due to COVID-19 protocols divided each class into eight districts with the top four in each weight class advancing to a sectional. To allow for one-day state tournaments for each class, only the top three qualified for state from sectionals, reducing the normal number of qualifiers in each weight class from 16 to 12.

Schillinger (2020 qualifier) and Lacina (two-time qualifier who cut from 160 to make the lineup) both lost third-place matches at Sectional 4, as did Burge at 138 and McDaniel at 152. While those losses ended three careers, McDaniel ended up agonizingly close to his first state trip for a second straight year after he came up one win shy of a top-four showing under the normal qualifying format as a sophomore.

Parsons went 2-2 at state as a sophomore to just miss a state medal despite a losing overall record and cut to 138 for last season. However, he ended up out of the medal matches as a junior going from District 8 champion to outside of the top four at Sectional 4 after losing his semifinal to eventual state runnerup LJ Davenport of Grandview.

“I would say Ben McDaniel, Jared Parsons, Fernandez and Hulett all to make big jumps,” Burress said. “I expect others to make jumps, but we need those guys to be on the podium to make a big deep run.”

Behind Hulett at 113, Platte County will look to junior Alex Fillmer, a junior transfer from Olathe East that provides an experienced body at a lower weight. The next three spots remain a jumble to sort out spot with no clear-cut option ready to reach 120. Lueders, impact freshman Evan MacCuish and junior Draiden Chilcoat will likely be competing for two spots at 126 and 132 with junior Davud Olso providing depth. Chilcoat has varsity experience each of the past two years but quit before the end of his sophomore season, which included a 5-12 record.

Darrell Smith, another freshman, will be competing for time at 152 along with senior LJ Scott (experience as a freshman and sophomore) and juniors Peyton Nickell (8-7 as a sophomore) and Bryan Jennings (3-13 as a sophomore). Depending on where Walls ends up, senior football star Trevor Scott, who has no previous experience but tremendous athletic upside, will compete with senior Christian Yocklin (4-18 as a junior in the middle weights) for the other vacant spot.

“Those are the spots waiting for someone to come and get them,” Burress said.

Platte County’s competition level will remain high with a trip next weekend to the Council Bluffs Classic in Iowa plus the return of Kansas City Stampede near the holiday break. In addition, the postseason goes back to four districts per class with four qualifiers in each weight going back to the traditional three-day, all-classes state tournament.

District 4 will remain the deepest in Class 3 despite a bunch of changes.

Bolivar, the District 7 champions who tied for eighth at state last season, moves out of the quadrant to District 3, while District 8 runnerup Fort Osage and top District 7 contenders Belton and Grain Valley all moved up to Class 4. The new teams in District 4 will be occasional Class 4 power Jefferson City (down in Class 3 for the first time after tying for third at state in Class 4 last year), Hannibal (tied for 11th at state last year) and Capital City. Lincoln Prep and KC East both return to the field after having their 2020-21 seasons canceled due to COVID-19.