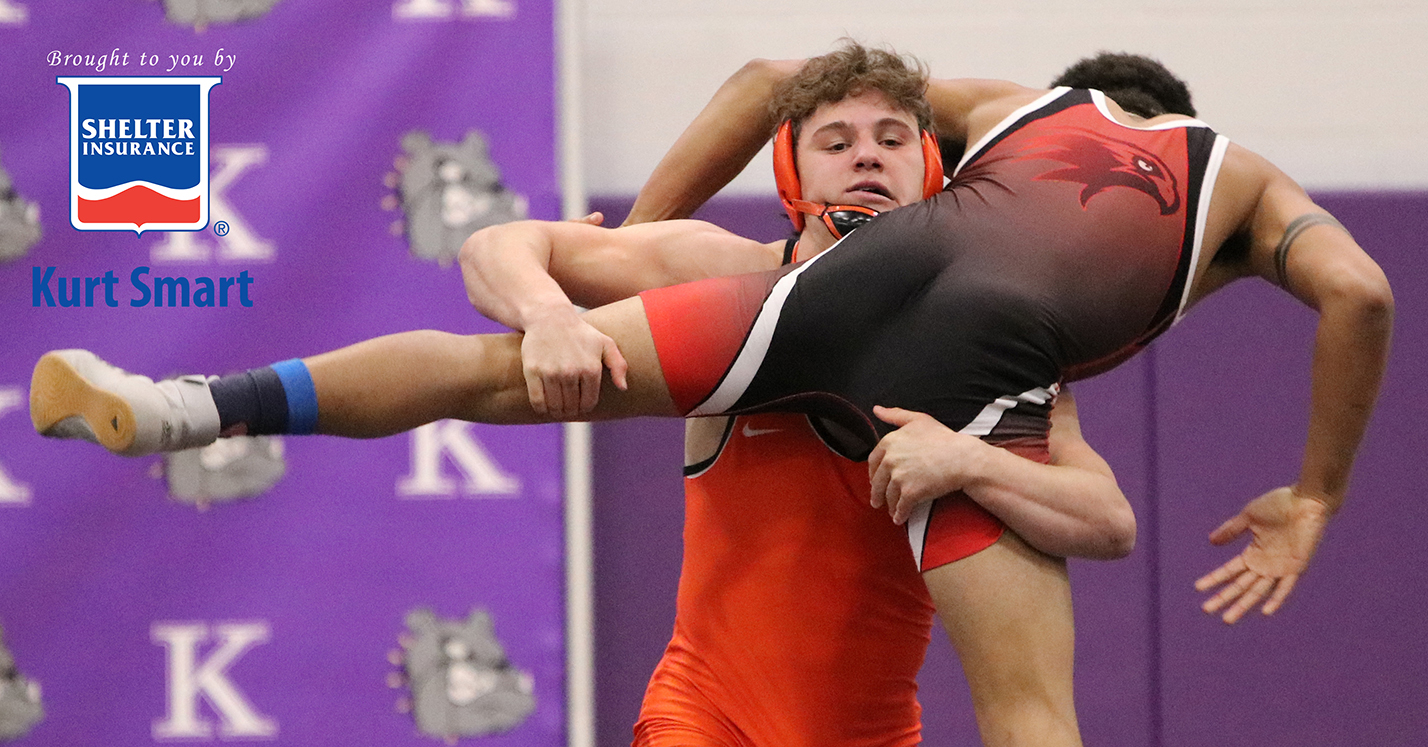 Platte County’s wrestlers gave off a relaxed vibe, leisurely congregating in a small area of the mats before the final round of the Class 3 District 8 tournament. However, the Pirates clearly understood the stakes in play in the medal matches.

“We knew that all of the matches would be important,” Platte County junior Ben McDaniel said. “(Our coaches have) always taught us to trust our training, and it paid off. We stayed calm and got the job done.”

Platte County qualified 12 total for Sectional 4 competition, and the six champions earned a top seed. Rocha won a third straight district title, while the other five were all first-time winners.

Fort Osage led by 13 points entering the final round, but Platte County’s 9-3 record in medal matches allowed them to finish with 176 points, taking the team title by seven. A of eight straight wins for the Pirates included key third-place wins for senior Hunter Burge (132) and juniors McDaniel (152) and Drake Lacina (160), while freshman Brody Lueders (126), senior Jesse Schillinger (220) and junior Mar’Ques Brown (285) finished fourth.

Parsons, Keuhn and Walls all won head-to-head matches in the final round over opponents from Fort Osage, which matched the Pirates with 12 sectional qualifiers. Walls’ pin of Indians’ junior David Jacquez in the 195 championship match sealed the team title for Platte County.

“We were down 13 going into finals and to come back and win the district championship, it feels good,” Platte County coach Reggie Burress said.

Due to COVID-19, the Missouri State High School Activities Association changed this year’s postseason format to limit the number of people at tournaments. That means the addition of a sectional round for the first time in nearly two decades, meaning the District 8 tournament featured just seven teams with some brackets including just four competitors.

With that in mind, Platte County will enjoy this first championship plaque but will have bigger goals starting with the eight-man brackets at Sectional 4 where only the top three advance to the Missouri State Wrestling Championships at each weight class — down from the normal four.

“We’ll use the (team title at Sectional 4) as a little motivation but really the motivation is we have to beat a couple of kids we lost to this week to get to the state tournament. That’s plain and simple,” Burress said.

Hulett started Platte County’s championship round off with important bonus points. After a 2-0 decision over Winnetonka junior John Nguyen in the semifinals, he fell behind Kearney freshman Ethan McMullen 2-0 in the opening seconds of the final.

The lead didn’t last long, and Hulett (31-5) scored his own takedown and quickly turned McMullen to his back and scored the fall in 1 minute, 51 seconds.

“Good for Caden to rally back, get the escape, get the takedown and right to the fall,” Burress said of his No. 4-ranked freshman.

The win closed Platte County within seven, but Fort Osage’s lead had increased to 16 by the time Burge took the mat at 132.

Burge (21-13) earned a pin in 59 seconds against Fort Osage freshman John Newton in the third-place match, coming back from a loss to Smithville senior and three-time state medalist JT O’Rourke in the semis of the bracket. Burge missed most of last season and was stuck at No. 2 on the depth chart as a sophomore but will have a shot to earn his first state berth next week.

A state qualifier as a sophomore at 145 who missed a medal by one win, Parsons (26-7) fell behind 2-0 to First Osage senior Bryan Herrera in the 138 final. He came back with a five-point reversal plus two more near-fall points at the end of the first period in what became a 7-2 decision.

“The thing about Parson is he’s not scared of any moment; that’s for sure. He will go for it,” Burress said.

Suddenly within six points of Fort Osage, Platte County faced an important rematch in the 145 final.

Rocha (35-0) faced off for the second time with Kearney senior Garrett Deason (23-5) just a couple of weeks after their first meeting. Rocha came up with a takedown in the second period in what ended up a 3-1 decision — the same score as the previous match when Rocha scored the winning takedown late in the third period.

“(Rocha) is doing a good job of staying to his strengths, and not making any mistakes is big,” Burress said.

McDaniel (27-10), who missed qualifying for state by one match as a sophomore, put Platte County in the lead for good with a pin in 2:45 of the third-place match against Smithville junior Aiden Krahn. McDaniel lost his semifinal by fall to Fort Osage senior Jesse Newton but came back with a key result in flipping the team race.

Lacina, a two-time state qualifier, kept the slim advantage intact at 160, essentially canceling out Fort Osage senior Jeremiah Phillips’ title at that weight. Lacina (20-7) went into overtime tied 1-1 with Kearney senior Will Locke in the third-place match, and after a scoreless 1-minute sudden victory period, Lacina earned an escape in the first tiebreaker period and won a 2-1 decision after riding Locke out for the full 30 seconds of the second tiebreaker period.

“The rideout was big because Drake, if you don’t know, is not much of a rider; that’s for sure,” Burress said. “He did a good job of returning and lifting and driving so I’m proud of him.”

Having to cut weight to make the lineup, Lacina lost a 5-4 decision in the semifinals to Smithville sophomore Riley Brown, who led 5-1 and held on late. Lacina now has an opportunity next week to achieve a likely extremely rare feat of qualifying for state in three different weights and going down each year. He went at 182 as a sophomore and 170 last year before dropping down again this season to 160.

The return of Keuhn to the lineup this season after taking a year off plus the addition of Fernandez made Lacina’s cut necessary.

Keuhn (29-4) continued his current win streak with three dominant wins by fall in the 170 bracket. He needed just 1:24 in the final to earn the top seed from District 8 with a chance to earn his second state trip and first since 2017 at 152.

“He is wrestling really well with a good amount of confidence. We just have to keep building on that the next couple of weeks,” Burress said.

Fernandez (27-2) turned in perhaps the most impressive performance for Platte County in medal matches. Facing off against two-time state qualifier and two-time district champion Mason Walters of William Chrisman, he went ahead 3-1 with about a minute left in regulation with a takedown and then added another to earn a 5-3 decision victory.

“Just get hand control, set the pace, set the tempo and just use my quickness, my speed and get through it — three periods,” said Fernandez, who won a 7-3 decision over Fort Osage freshman Gavin Gallman in the semifinals. “Wearing him out through the whole match and just keep grinding on him.”

Fernandez missed about two weeks in the regular season before returning to Platte County’s lineup in Blue Springs South’s Lydia’s Lights Tournament to close the regular season. He also tweaked his ankle in practice two days before District 8.

“I definitely needed to get my conditioning up after I was quarantined,” Fernandez said. “I still feel like I need to keep on working on that, but it feels good today.”

Like Keuhn, Walls qualified for state as a freshman for Platte County and but did not medal at 170. He missed all of last season with a shoulder injury suffered in football and just recently moved back into the 195 state rankings at No. 5, according to Missouri Wrestling.

Walls won all three of his matches at District 8 by fall and the title match lasted longer than the first two combined. After a scoreless first period against Jacquez of Fort Osage, he chose the down position, escaped for the match’s first point and then scored what would be the only takedown and scoring the fall at 3:24.

Platte County led by 13 at that point and couldn’t be caught. Fort Osage finished with 169 points after Stevie Gabb won the 285 championship by fall while Kearney was third at 140½ and Smithville fourth at 123½.

“Once we got up there and we had a chance to run (Fort Osage) down, I knew with the horses we had up there that we could get it done,” Burress said.

Schillinger (19-10), the sixth previous state qualifier, earned the No. 1 seed at 220 but was pinned in tiebreakers by Kearney junior Zach Olson in the semifinals before losing 3-1 in sudden victory overtime to William Chrisman junior Nathan Campos.

Platte County hadn’t lost a match since Lueders (11-30) lost his third-place match in a four-man bracket at 126 over an hour earlier. Brown then lost the 285 third-place match by fall to William Chrisman senior Brandon Rue to conclude the day.

However, Brown (10-26) earned critical points in one of the few wrestleback semifinals a round earlier. He pinned Smithville junior Trisan Wald in the second period for the biggest win of his to-this-point short varsity career.

“We literally needed all the points we could get,” Burress said, acknowledging the importance of Brown’s eight team points.

Platte County qualified 12 of the 13 wrestlers in the lineup for Sectional 4, which will be held Saturday, Feb. 27 at Belton High School. Shane Leary (20-20), a freshman, went 0-2 at 120 after drawing No. 1 seed and eventual district champion Kolby McClain of Smithville in the first round. Leary then lost 9-4 to Fort Osage sophomore Kyle LeHotta, who went on to place third.