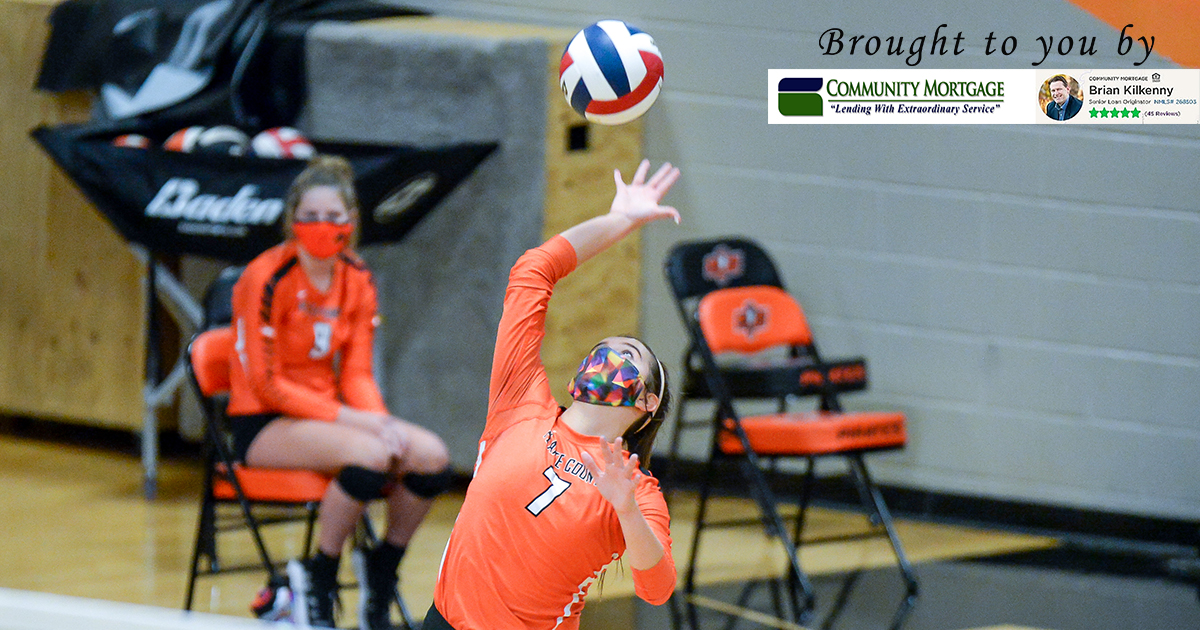 For the second time in three days, a shorthanded Platte County roster fought and scrapped against a top-tier Class 5 team. The Pirates didn’t have enough to keep pace either time.

Liberty North started fast and decisively closed out a 25-21, 18-25, 25-14, 25-15 victory Thursday night at Platte County High School. The Pirates benefitted from the return of junior standout Kate Brown up front but were still without all-state senior Bryn McGehe and senior libero Presli Firkins in an untimely difficult start to the season, which included this matchup with the team that ended their season in the Class 4 District 16 semifinals a year ago.

Aly Anderson, a senior outside hitter, put up a match-high 18 kills for Platte County, but the Pirates rarely found a rhythm and most surges were short-lived.

“When we first started the season, I thought we would’ve started a little bit differently,” Platte County coach Katlyn Donovan said. “We had three starters out. Our freshmen, I feel like they did a nice job stepping in for us when we needed to. It’ll be nice to get those girls back and get into a normal rotation for us.”

Liberty North never trailed in the first, third and fourth sets, and Platte County was playing from behind almost the entire way.

In the first set, jittery serve receive from Platte County led to a quick 6-3 deficit. The Pirates would close to within one point, be down as many as eight and have a solid closing stretch in falling behind 1-0.

Platte County forged three early ties in set two and took their first lead of the match at 6-5 on the service of senior Cameron Brown. Anderson then had a stretch of three straight kills to make it 9-5 for the Pirates. The final one in that series came on a scrambling attack that included an overhead hit setup from junior Mary Grace Hunter that Anderson slammed down on an unprepared defense.

“That felt really nice,” Anderson said. “I always love getting a nice run.”

Liberty North would respond with a 6-1 run shortly after to go back in front 12-11 and force Donovan into a timeout. Platte County would then forged ties at 12, 14 and 15 with Kate Brown making her first big impact of the season with three kills in that stretch.

Eventually, an ace from Hunter made it 17-15, and Platte County pulled away to even the match at 1-1. Anderson had eight kills in the second set alone.

“Aly was phenomenal tonight,” Donovan said. “She killed it that second set. We’re super proud of her. She led the team for sure tonight.”

Platte County couldn’t maintain the momentum in the third set, fell behind and didn’t recover from an early 5-1 deficit. Unlike the end of the first set, the Pirates wilted and that was a bad omen for the fourth set.

The positive finish to the first set seemed to up Platte County’s confidence for the second set, but Liberty North rolled through the end of the fourth. The Pirates did score the opening point in the fourth set — the only time they did that in four tries — but gave up the next three and then trailed 7-2.

A kill from senior first-year starter Haley Luna gave Platte County a quick shot of energy and started a 3-0 burst that closed the gap back to 13-8 and forced a timeout. Liberty North then pulled away.

“You still have to hold your athletes to that high standard we have for Platte County volleyball,” Donovan said. “I told them tonight I was a little disappointed in our effort and attitude in this game because that’s not something we’ve done the past few years, but you know, we’ll adjust. We’ll get better every single game. It was a work in progress.”

Coming off back-to-back 28-wins seasons, Platte County came into the season knowing the biggest task would be replacing four-year starting setter Ashley Bell. The Pirates have embraced a two-setter season in recent years, and without McGehe for the first two matches, junior Emerson Walter and Hunter have been splitting the duties.

Walter had 24 assists against Liberty North and has gained valuable experience while carrying the brunt of the setup responsibilities.

“Emerson and MG have done a phenomenal job,” Donovan said. “We kind of told them in the beginning that Emerson is our No. 2 setter behind Bryn and then Mary if needed, she’ll step in do that for us. But Emerson is a great leader on the court, she tried to do that tonight for us— be that vocal leader and get everyone together. So we’re proud of her for that, and we can’t wait to see what she can do toward the end of the season and the coming year as well.”

Hunter had a second straight strong match with 16 assists and four kills, while Kate Brown had 12 kills in her season debut. Five players wound up in double figures for digs, including junior Morgan Cox (13), Kat Brown (11), Anderson (10), Walter (10) and Hunter (10).

Cox started the first two matches in place of Firkins.

Anderson again led Platte County’s offense with 12 kills, while Hunter added 11. Anderson, Cameron Brown and Walter each had a service ace. Morgan Cox, a junior starting in place of Firkins to start the year, led the defense with 21 digs, while Anderson had 19 and Hunter 12.

In her debut as the top setter, Walter had 16 assists with Hunter right behind at 15.

Park Hill, also a district semifinalist with 20-plus wins a year ago, 27 kills from senior superstar Kristen Birmingham. The Trojans were a 2018 district champion, toppling Platte County in the final, meaning the Pirates opened the season against the team that ended each of their previous two seasons.

“Our goal this year was to get some tough nonconference games, and I feel like we did that with Park Hill and Liberty North (on Tuesday and tonight),” Donovan said.