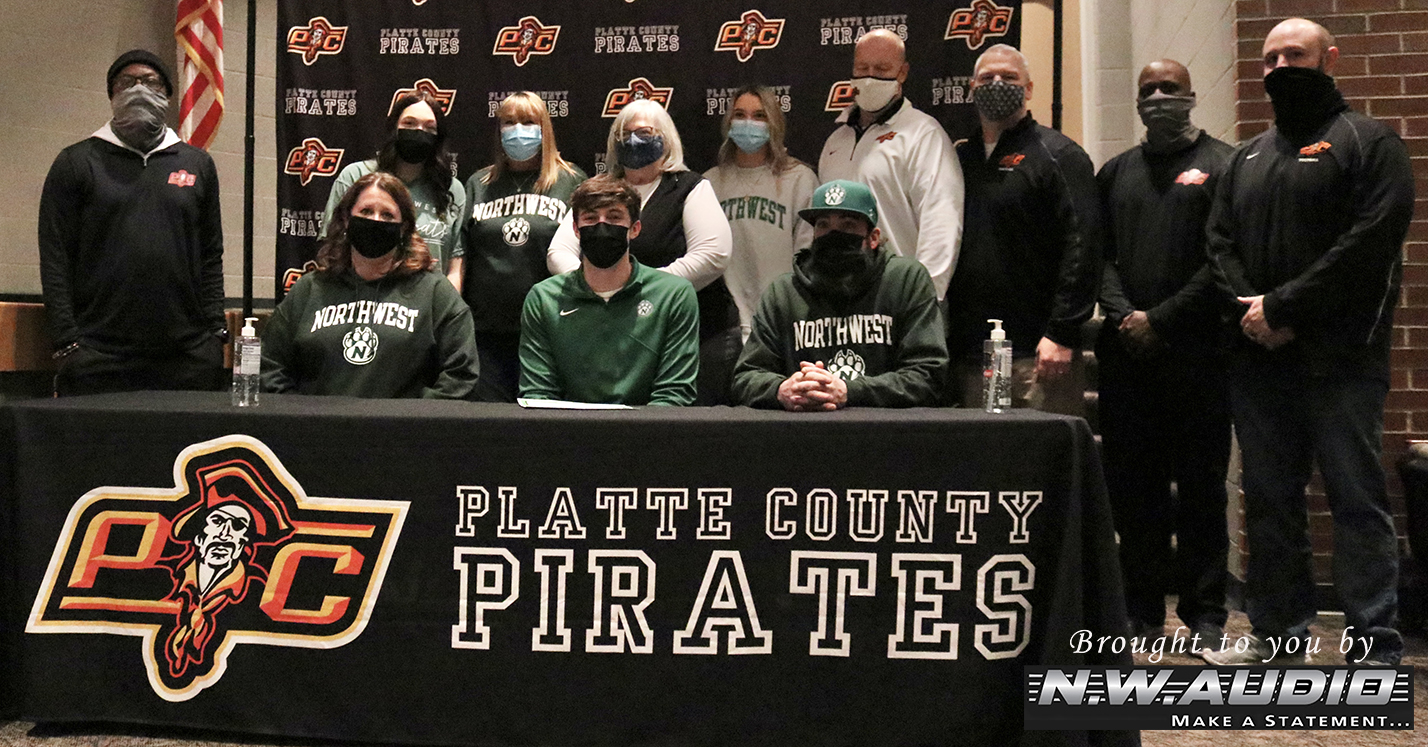 Platte County’s largest senior class in recent years and one of the most accomplished in program history celebrated seven members making their college choices official during a signing ceremony Wednesday inside Wilson Auditorium.

While additional members could still find a home, the initial honorees included the first Division I signee since Derek Kohler in 2017 (safety Collin Tyson), a pair of Northwest Missouri State commits (Chris Ruhnke and Trey Butcher), two headed to play at St. Ambrose (Cayden Davis and Forrest Boynton) a three-year starter from the middle of the defense (Keaton Smith) and a future Arkansas Tech wide receiver (Colby Rollins). All were part of a senior class that tied a program record by playing its 55th game in a span of four years, going 44-11 and reaching the state championship game for the first time in both Class 4 and Class 5.

Platte County finished as state runnerup in Class 4 in 2019 and achieved the same finish in Class 5 this past fall, becoming the first team in state history to finish second in consecutive seasons while playing in different classifications.

“They’re an unbelievable class,” Platte County coach Bill Utz said. “They’re just really, really great kids. I do feel like they’ll be successful. One of the reasons we do this job is not to win and lose and do all that but it’s also to develop these guys into being a next-level success.”

This includes Tyson, who signed during the early signing period with Division I-FCS Eastern Illinois, an Ohio Valley Conference member in Charleston. In recent years, only Kohler and Parker Lacina have earned Division I scholarships, playing at Missouri State. Tyson will now have that chance after a three-year career as a starter with the Pirates.

Tyson spent his first two seasons at cornerback but transitioned to safety as a senior and used a strong postseason run to make both first team on both the Missouri Media and Missouri Football Coaches Association all-state teams. He finished with 58 tackles (five for loss), two forced fumbles, two fumbles recovered, a sack and a key blocked punt in Class 5 quarterfinal win over Grain Valley.

Like Tyson, Smith started for three seasons at nose tackle for Platte County and earned a scholarship from Midland, an NAIA school in Fremont, Nebraska. The anchor of a defense that only allowed two opponents more than 24 points (42 in a baffling loss to North Kansas City in Week 4 and the 42-7 Show-Me Bowl loss to Jackson), he set career-highs. He totaled 51 tackles (one for loss), four sacks and a pass breakup but also ate up key blocks that allowed junior linebackers Trevor Scott and Blaine Keuhn to thrive when opponents bypassed a defensive line that totaled 29½ sacks on the season.

Platte County’s defensive line included three key seniors, and Forrest Boynton also earned an opportunity to play on the defensive line. He signed with St. Ambrose, an NAIA school in Davenport, Iowa. Boynton emerged as an energetic reserve defensive end as a sophomore and started the majority of the past two seasons, recording 43 tackles (one for loss), 5½ sacks and an astonishing team0high six fumble recoveries. He was an honorable mention All-Suburban Conference Blue Division and All-Class 5 District 8 pick.

Davis, a second-year starter at running back, will join Boynton at St. Ambrose to play for the Fighting Bees.

“I’m happy Forrest is going with me,” Davis said. “Forrest was the first one; I saw Forrest went (for a visit), got offered by them. I figured if I’ve got a teammate going I might as well go there.”

After making two starts as a sophomore and rushing for 100 yards in each of those games, Davis opened his junior season as the presumptive starter but suffered an ankle injury in Week 1, and he ended up splitting time with Trey Phan. Davis led the Pirates in rushing with 1,043 yards and 10 touchdowns in the Class 4 state runnerup season.

Davis started all 14 games this season and finished with 1,009 rushing yards and a career-high 18 touchdowns on the ground.

“I love playing football,” said Davis, a first team All-Blue Division and all-district pick as a senior. “Even if this school is NAIA, any chance to play football I’m going to take it.”

Ruhnke and Butcher will also remain teammates and on the same side of the ball.

A two-year starter, Ruhnke finished his career as the leading passer in Platte County history with 5,979 yards, completing 421 of 814 passes for 52 touchdowns — third in program history behind Justin Mitchell’s record of 59 from 2014-16 and Brandon Gutshall’s 56 from 1998-2000. Ruhnke went 208 of 411 for 3,046 yards, 28 touchdowns and 19 interceptions as a senior. He passed Mitchell’s career yardage record in a comeback win over Grain Valley in the Class 5 quarterfinals and went on to become the Pirates’ first-ever nominee an finalist for the Simone Award, given annually to the top player in the Kansas City metro area.

“Just the whole atmosphere and the tradition they have with the program, it really felt like family and like it could be my home for the next four years,” said Ruhnke, a unanimous second-team all-state selection as a senior. “I’ll be excited to learn from great quarterbacks like I have here.”

Platte County’s offense averaged 31.9 points per game in 2020 and put up 24 or more in every game until the Show-Me Bowl loss to Jackson.

Butcher came into the season as the only returning starter on the offensive line, and he ended up starting at three different positions this season — mostly at center and left tackle — while injuries and other complications forced the Pirates to use seven different offensive line combinations. The Pirates ran for more than 1,600 yards in addition to Ruhnke’s prolific passing totals.

Originally committed to NAIA Benedictine, Butcher ended up taking an opportunity to join the quarterback he spent the past two years playing in front of at Platte County. Butcher’s versatility will be a plus as he looks to find a role with the Bearcats.

Rollins started each of the past two years and earned first team All-Blue Division and all-district honors as a senior after being a part of a productive 1-2 outside punch with fellow senior wide receiver Dayton Mitchell.

Rollins accounted for touchdowns in some of Platte County’s most memorable over the past two years as a deep threat now ready to play at Division II Arkansas Tech.

Prior to 2019, Platte County’s most recent title game appearances came in winning three straight unbeaten Class 3A/3 state championships from 2000 to 2002. This was also the first 12-win season since those three 14-0 seasons. In addition to another Show-Me Bowl appearance, the Pirates also captured the first Class 5 district title in program history, reached the playoffs and state semifinals for the third time in four seasons and claimed its first outright Suburban Conference Blue Division title since 2012 after earning a share of each of the past two.

Mitchell, senior defensive tackle Alex Stearns and senior defensive back Luke Filger are the other Platte County players who could potentially sign late or walk-on to continue their career. The Pirates had 22 seniors on the roster this season, meaning nearly half have a chance to keep playing.