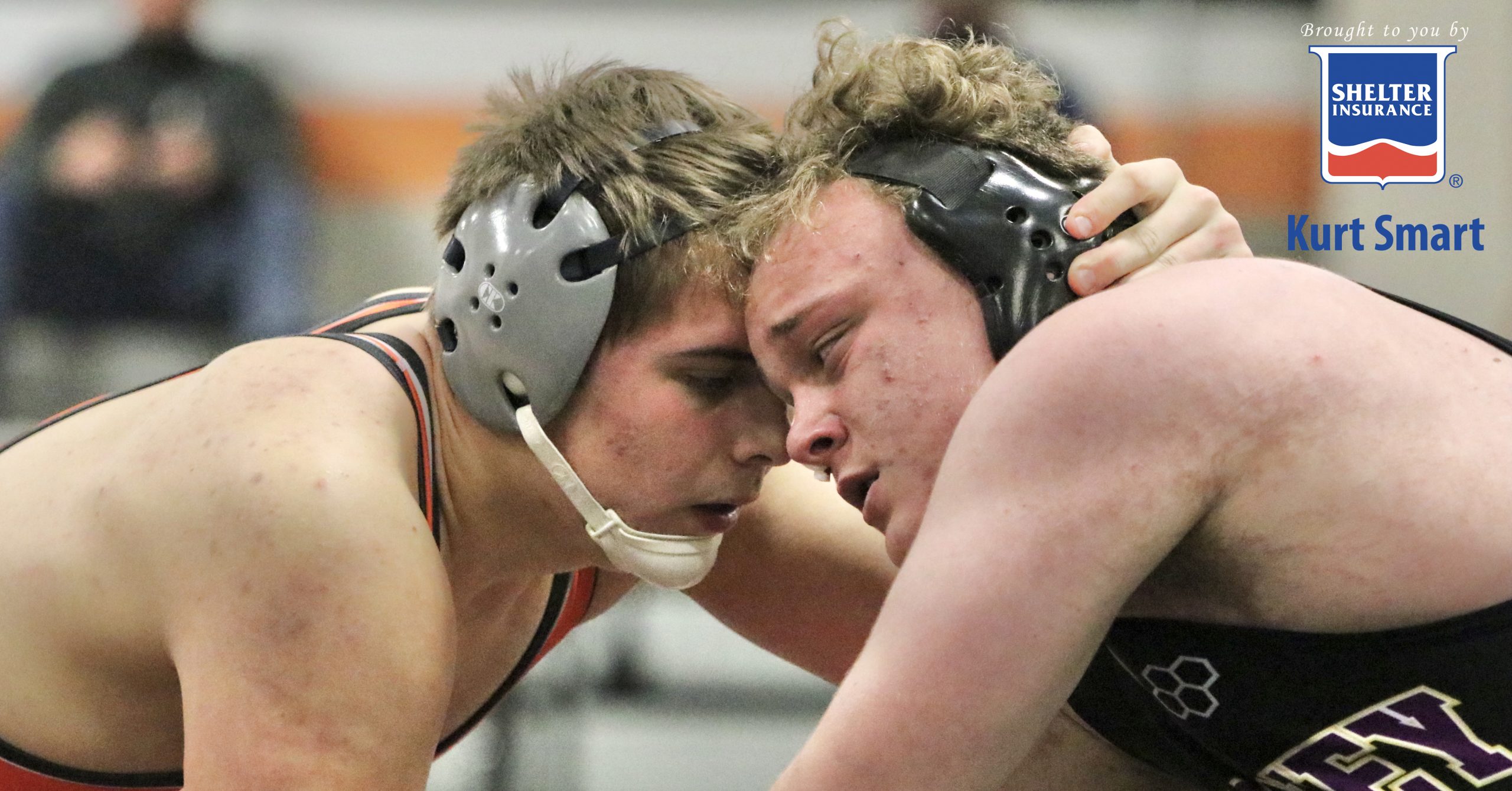 During a blood stoppage in the second period, Jesse Schillinger learned the actual specifics of the task at hand.

Platte County coach Reggie Burress consulted the official and knew a victory of any kind in the closing 285-pound match dual would give the Pirates the victory over rival Kearney on Tuesday night at Platte County High School. Instead of pressing, senior Jesse Schillinger stayed composed to earn a 5-2 decision over Kearney’s Jase Jackson.

The dual ended up tied 36-36, but Platte County took the victory by one of the slimmest margins possible — tiebreaker criteria of more total victories in the 13 matches wrestled (7-6). A bonus-point win would have created a difference on the scoreboard, but Schillinger’s decision assured the Pirates of their first win over Kearney since 2017 and first Suburban Conference Blue Division title since winning a third straight that same season.

“Going into it, (Burress) said get a major, tech or pin,” said Schillinger, a returning state qualifier in his second year at Platte County. “Halfway through when the kid got a bloody nose, he was like, ‘Look we have more wins. Just win,’ so I wasn’t going to do anything risky — just kept it safe.”

Burress made of pair of moves late in an ultimately successful effort to swing the dual in Platte County’s favor. Pirates junior Blaine Keuhn and Schillinger both moved up a weight class, and the late bump of Schillinger from 220 to 285 looked reminiscent of Kearney’s shuffle in 2017 that backfired when Platte County’s Matthew Knopp pinned Bulldogs’ normal 220-pounder Brett Mordecai in a dramatic final match.

“I still wanted to go after the kid, and I still wanted to win by a lot more than what I did,” Schillinger said. “I was just not letting off, and I’m learning to be more aggressive day by day, and that’s what I’m trying to get to.”

The 2021 win over Kearney didn’t have the same exciting dynamic as the 2017 conclusion but marked an important win for Platte County, which had lost three straight in the series but has excelled this season with a rejuvenated roster. The Pirates were without senior Drake Lacina at 160 and freshman Jake Fernandez at 182, making the task even more difficult.

Platte County finished the regular season at 19-1 in duals with the lone loss by four points to Helias at last weekend’s Platte County Invitational.

“It feels great knowing we have a team that can bring success to each other, and we just bounce off each other. We bounce off each other’s energy every single match,” said Platte County junior Eli Rocha, the only returning state medalist for the Pirates but one of six previous qualifiers along with a pair of standout freshmen. “(The conference title) means that it looks like we have a bright future with this team. Most of our team is juniors and that still gives us another year to perfect everything. I feel really good. I feel really good about the team.”

Rocha and Season exchanged escapes at the beginning of the second and third periods to create a 1-1 tie. Rocha took a solid shot in the second that nearly resulted in a takedown but that Deason almost countered into two points of his own in the matchup of state title contenders.

With time ticking away late, Rocha again went deep on a shot and eventually scrambled through a shuck by to complete the winning takedown of a 3-1 decision victory with about 10 seconds left in regulation.

“I went out there, and I knew he was going to try to slow me down,” Rocha said. “At the end, I knew if I kept pushing and I used my motor against his, I knew that my conditioning was going to be better and would pull it out at the end of that match.”

But did Rocha know the late flurry would end up that way?

Platte County’s 21-12 lead then evaporated with three straight losses, but that included Burress leaving an open at 170 to move Keuhn, a 2019 state qualifier who did not wrestle last year, to 182 with Fernandez not in his normal spot. Keuhn used a bruising blast double-leg takedown to stick Cameron Emmons to his back and earn the fall in just 24 seconds, closing Kearney’s lead to 30-27.

At 195, Platte County junior Jaydon Walls, a 2019 Class 3 District 4 champion who missed last season due to a shoulder injury, added a pin 1:43 to briefly give the Pirates the lead back at 33-30. Instead of having Schillinger face Kearney’s Zach Olson again in what would essentially be a tossup, Burress made his final move.

“(Burress) mentioned (the move) before (the dual),” said Schillinger, who lost to Olson in the regular season last year but came back to win an overtime decision to advance out of District 4 and to state. “Whenever, we got to 195, he was like, ‘Move up from 220.’ I was like, ‘Let’s go.’ It’s definitely 100 percent about the team. Like they said, first team conference title win since 2017 — happy to be a part of that and happy to make that happen.”

Platte County knew the moves might be necessary but were in strong position thanks to a quick start. Pirates freshman Caden Hulett pinned Kearney’s Ethan McMullen in 1:24 in the 106 match to open the dual, and after the double open at 113, freshman Shane Leary made it 12-0 with a 57-second pin in the 120 match to quickly make it 12-0.

Kearney’s wins at 126 and 132, two-time state champion Eli Ashcroft’s pin of Platte County senior Hunter Burge, made it 12-12. Pirates junior Jared Parsons then pinned Jadon Freestone in the second period to make it 18-12 ahead of the showcase bout between Rocha and Deason.

“I knew my win was going to be big for the dual,” Rocha said. “That was probably the best match of the dual, and I knew that if I could come out on top that my team would have a good chance to win.”

Platte County put nine in the finals of an eight-team individual tournament Friday in Blue Springs and nearly came away with the overall championship. Rocha (145), Keuhn (170), Fernandez (182) and Walls (195) won their championship bouts, but Pleasant Hill’s five straight individual titles from 113 to 138 plus Ryan Volland’s victory at 152 gave the Roosters the team title.

Platte County led the team race going to the final round, finally having the projected full strength lineup in place. Burge (132), Parsons (138), Rocha (145), McDaniel (152) and Lacina (160) made up the middle of the lineup with all five reaching the finals. Schillinger finished as a runnerup at 220, as well.

However, only Rocha came away with a championship win, pinning Pleasant Hill’s Brayden Bush in the second period. Rocha improved to 32-0 at the conclusion of the regular season with two pins and a technical fall on the night.

Keuhn (26-4), Fernandez (24-2) and Walls (30-2) also closed the regular season with wins for Platte County, which will have two weeks before the start of the reformatted postseason with Class 3 District 8 competition on Saturday, February 13.

Hulett (106) and Leary (120) reached the third-place match for Platte County after semifinal losses. Hulett lost by fall to Blue Springs South’s Logan Mainard in a rematch of a bout Hulett won by fall in the season-opening Smithville Tournament.