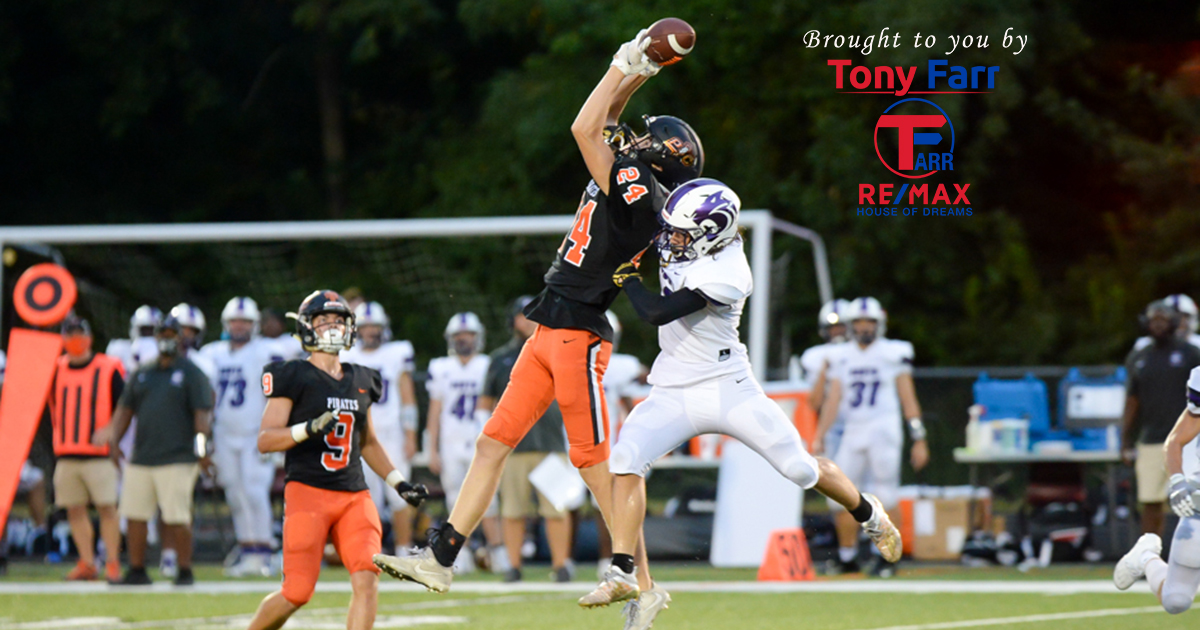 When faced with an early deficit, many on Platte County’s experienced players flashed back to a year earlier and adjusted mindset.

Park Hill South used an early touchdown to create doubt in the season-opener Friday at Pirate Stadium, but the momentum didn’t last. Thanks to some key turnovers and impressive two-touchdown performance from a debutant wide receiver, Platte County took full control and rolled to a 35-17 victory. The Pirates created turnovers on back-to-back first half possessions to create an opening, and senior quarterback Chris Ruhnke finished 24 of 36 for 365 yards and four touchdown passes — a pair to unknown senior Joey Schultz — to lead the swift and decisive comeback.

A year ago, Park Hill South scored 28 unanswered points to close out an unexpected 31-19 upset in Week 2, and Platte County had not yet forgotten.

Just like 2019, Platte County (1-0) quickly shifts attention to a Suburban Conference Blue Division opener against chief rival Kearney (1-0), which enters off of a 27-21 overtime win against Fort Osage in Week 1. This differs from last season when both entered reeling off of tough losses.

Platte County recovered the quickest a year ago, halting the program’s only frustratingly long losing streak in decades.

Kearney had won eight straight meetings between the two teams separated by about 25 miles and 13 of 14 overall. However, Platte County was never tested in a 51-14 blowout that allowed Utz to put the orange 2019 sticker on the Highway 92 Showdown traveling trophy named for the road that traverses the middle of both towns. The Bulldogs had won all five meetings since the metal sign became a part of the rivalry in 2014 but now face the possibility of losing back-to-back games in the series for the first time since the teams were in the Blue Division together.

“Going into Kearney, I mean it’s Kearney,” Utz said. “First conference game so that creates a lot of hype, and then obviously it’s a game we look forward to.”

Platte County won’t have the same doubts to overcome this year after closing out Park Hill South this time around. The Panthers put together a lengthy drive out of halftime to close within 21-17 but would not have the ball within one possession again.

Instead, Ruhnke led touchdown drives of 60 and 82 yards. The first included a shifty 26-yard catch-and-run for sophomore wide receiver Carter Salzman and then runs of 17 and 1 yards for senior running back Cayden Davis. The second concluded with Ruhnke’s second short touchdown pass to Schultz on a fade route jumpball.

Platte County then ran out the final 11 minutes, 43 seconds with some difficulty. Overall, the Pirates ran for just 63 yards on 30 attempts, including four sacks of Ruhnke. Davis, who ran for 1,000 yards as a junior, wound up with 37 yards on 13 carries, while junior reserve running back Ben McDaniel had 30 yards on 11 tries.

The opening day offensive line for Platte County included senior Trey Butcher, a second-year starter and third-year contributor, at left guard, but the other four members of the unit received their first career starts. The other starters were senior center Grant Gomel, senior right tackle Colby Guffey, senior right guard Jesse Schillinger and junior left tackle Joe Nicholson, who swapped places with Butcher on the line days before the game.

“It’s just footwork. We’ve got to get our feet under us and drive block,” Gomel said. “We just can’t go up and down. We’ve got to stay up, and we’ve got to be able to run the ball.”

With Platte County’s run game sputtering, Ruhnke also threw two late interceptions with a holding penalty on the return negating one that Park Hill South brought back for a touchdown. Park Hill South could do nothing with either turnover and failed to cut into the three-score deficit.

“I’m just glad it wasn’t in a key moment,” Ruhnke said. “I should’ve just not forced it — thrown it out of bounds or just slid.”

Platte County experienced an equally frustrating start to the game. Taking the opening kickoff, the Pirates marched right down the field but eventually settled for a 20-yard field goal, which missed to keep the game scoreless.

Park Hill South went to a no-huddle, hurry-up offense on its first drive with success. Behind junior quarterback Nathan Ricco and sophomore running back Braden Bartosh, the Panthers went 80 yards in under two minutes with Bartosh plowing into the end zone from 1-yard out just one play after he sliced through the Pirates’ defense for an 18-yard gain.

“One thing I was concerned with was some of our newer players that when they faced adversity how they reacted,” Utz said. “I thought we had several kids that got challenged and then came out and had answers before the end of the game.”

Platte County then went three-and-out after allowing back-to-back sacks on second and third down, and after a short punt, Park Hill South started its next drive in Pirates’ territory. However, Ricco’s third-down pass down the middle wound up in the hands of junior safety Cade Fowler for his first interception since missing the final nine games of 2019 with a shoulder injury suffered against Raymore-Peculiar.

The first turnover didn’t lead to points, but one play after Ruhnke’s punt pinned Park Hill South at its own 7, the key play happened on first down.

Park Hill South junior running back Roger Guillory went up the middle where Platte County junior linebacker Blaine Keuhn met him and lifted him into the air. Guillory fumbled on the play, and Pirates senior safety Collin Tyson came up with the recovery at the 10.

On the next snap, Ruhnke lobbed a pass to Schultz — a 6-foot-6 basketball and track and field standout out for football for the first time since eighth grade. He went up and snared the ball to tie the score at 7-7.

Schultz had dropped a similar pass in the end zone on the first drive but came back to finish with three catches for 47 yards, including a difficult grab across the middle that went for 26 on a go-ahead touchdown drive late in the second quarter.

Ricco had two big completions on the first scoring drive and threw a long touchdown pass to junior Mudia Reuben in the second quarter but finished just 6-for-26 126 yards and two interceptions. The Pirates sacked Ricco four times. Bartosh did have 126 yards on 29 carries, but the Panthers were outgained 411-328 on the night.

In addition to the two first half turnovers, Platte County got its second interception from sophomore cornerback Garrett Smith, who outleaped a receiver in the end zone to give the Pirates the ball back after Ruhnke threw his first interception.

“After we got to the sideline after that first drive, made some adjustments, then I felt we did pretty good for the rest of the game,” Keaton Smith said.

Platte County scored touchdowns on three of its final four possessions of the first half and five of six overall to take control.

After the opening score, Park Hill South immediately went three-and-out, and Ruhnke had an 18-yard scramble and a 34-yard pass to Salzman on another touchdown drive, which ended with a 12-yard touchdown pass to senior wide receiver Dayton Mitchell that gave the Pirates their first lead at 14-7. After Reuben’s touchdown reception, Platte County senior wide receiver Colby Rollins fumbled on a long pass reception to five the Panthers another lifeline.

But after a stop, Platte County made some difficult plays to reach the end zone for a third time. Ruhnke was sacked on second down, but a 24-yard screen pass to Davis converted a third and long, and Schultz had his long pass reception. Ruhnke finished the drive with a 3-yard scoring pass to McDaniel wide open in the flat for his first career touchdown to send the Pirates into halftime with a 21-14 lead.

Platte County’s defense bent on the first drive out of halftime, but Park Hill South settled for Reuben’s 29-yard field goal and couldn’t stop the Pirates’ passing attack and start another comeback. The offensive line had allowed three sacks in the first half but cleaned up the effort to keep Ruhnke relatively clean.

“Early on, we weren’t picking up that ‘mike’ backer as well, but we started getting eyes on backers and that really helped us,” Gomel said.

Ruhnke completed passes to seven different players. Rollins (7-120) and Mitchell (5-88) — two seniors back after breakout junior seasons — led the way, while Salzman (3-71), Schultz (3-47), Davis (3-27), junior wide receiver Cole Rhoden (2-9) and McDaniel (1-3) followed behind. Rollins led the Pirates in touchdowns a year ago with 11 after entering the season without a catch, while Mitchell was a second-year starter who topped the team in receptions and yards.

In fact, Rollins and Mitchell were two of only three players to catch a touchdown from Ruhnke last season, but he already had touchdown tosses to three players in the opener and Rollins wasn’t on the list — a clear sign of Platte County’s increased depth at the skill positions.

“This year we have a lot of different ways we can expose a defense,” Ruhnke said going on to joke that it might be hard to keep all of the receivers happy. “I’ll try to get ’em each a few passes each game.”

All in all, Platte County had plenty of positives to take from the opening win in a season that follows the first Class 4 Show-Me Bowl appearance in program history. Expectations were rightfully high with so many returning starters from the memorable run that ended with a disappointing blowout loss to Webb City.

The state runners-up now immediately face tough Blue Division tests with the road game at Kearney before hosting Grandview (1-0), which upset Platte County to close the regular season in 2019. The Pirates were forced to share the conference title for a second straight season because of the loss but recovered with the five straight postseason wins to make the program’s deepest playoff run since winning three straight Class 3A/3 state championships from 2000-2002.