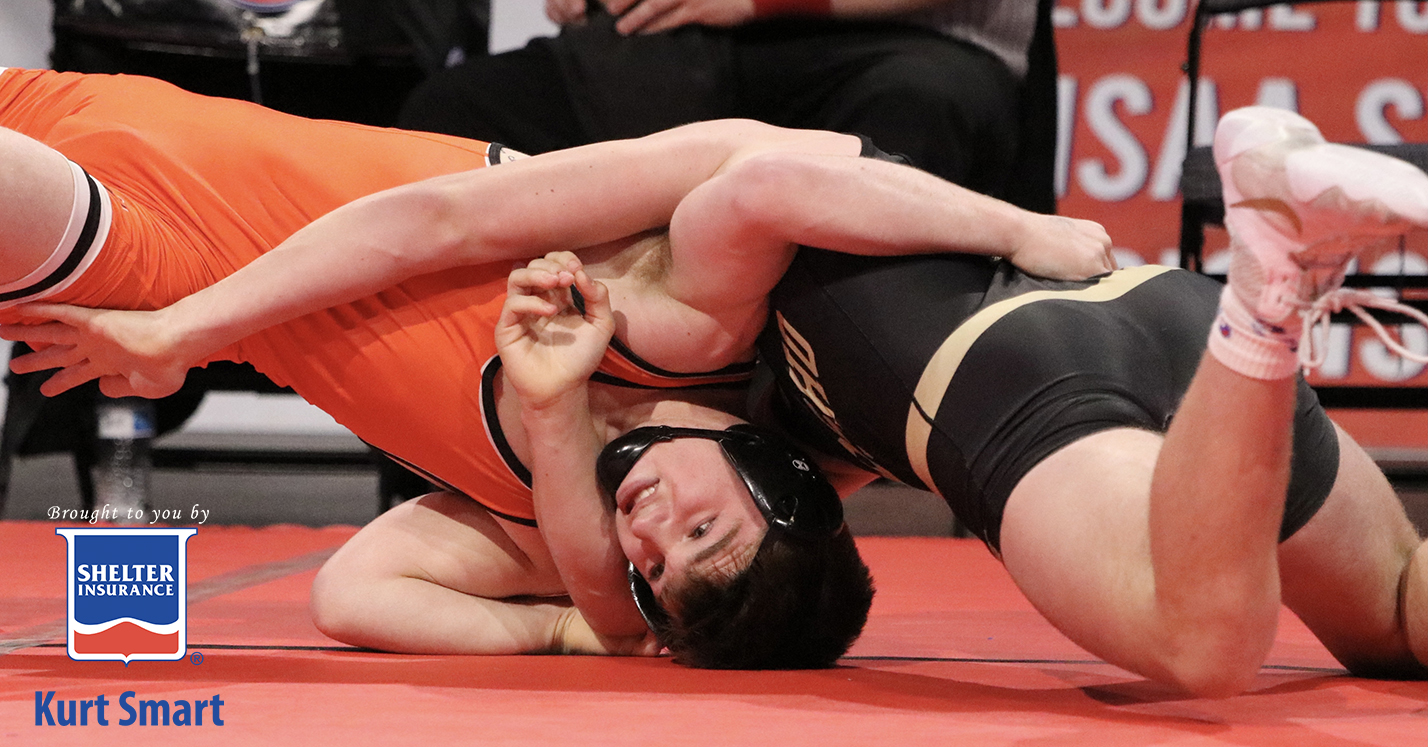 INDEPENDENCE, Mo. — The wait for the next Platte County finalist persists, but the Pirates took a step back toward normalcy in this year’s Class 3 Missouri State Wrestling Championships.

Platte County juniors Eli Rocha, Jaydon Walls and Blaine Keuhn all earned medals with top-six finishes in a unique one-day setup for the tournament at Cable Dahmer Arena. Rocha became a three-time state medalist, earning his best finish to this point in his career with a third-place showing at 145 pounds. Walls matched that with a a third-place showing at 195 with his first medal in two state trips, while Keuhn forged through a busy day to place fifth at 170 to make the podium for the first time.

The three medals matched Platte County’s total from 2019, and the Pirates placed seventh in the final team standings — up from an uncharacteristic tie for 33rd in 2020 when Rocha was the lone medalist. Caden Hulett (106) and Jake Fernandez (182), the Pirates’ two standout freshmen, both went 1-2 in their first state trips, meaning all five of this year’s qualifiers contributed to the showing.

“I think it was a positive this week,” Platte County coach Reggie Burress said. “Three placers — two thirds and a fifth — is a good day’s work. The two freshmen didn’t place, but they both won matches. They’ll all be back next year.”

Due to match limitations, the semifinalists in each weight class were assured of no worse than fourth place, and sectional champions received a bye into the quarterfinals. This created a unique opportunity.

Undefeated entering the tournament, Rocha took advantage with a quick pin of Hillsboro sophomore Raymund Burnett in the 145 quarterfinals to guarantee his third state medal in as many trips, reaching the semifinals for the first time since his freshman season. Walls also won by fall in the 195 quarterfinals, marking his first state match since his freshman season. He missed all of 2019-2020 due to a shoulder injury suffered in football.

However, neither Rocha nor Walls came up with the win needed to become Platte County’s first state finalists since Cody Phippen and Sage Smart captured state titles in 2018.

In the semifinals, Rocha matched up with Neosho sophomore Eli Zar (36-8), who led 1-0 when he scored a takedown late in the third period for a 3-0 advantage. Rocha picked up an escape 19 seconds into the third period before allowing an escape and another takedown.

Zar led 6-2, having picked up the second and third takedowns scored against Rocha this season and went on to a 7-4 decision victory.

“(Rocha) needs to just always stay in the moment and wrestle like he wrestles every match; don’t change for any reason,” Burress said. “You watched him all year, and that was the first time I saw him not move his hands and feet at the same time all year.”

Zar lost the 145 title bout in an 8-0 major decision for top-ranked Pacific senior Callum Sitek (52-0). Rocha matched up for the fourth time this season with Kearney senior Garrett Deason (27-8) in the third-place match.

For the fourth time, Rocha (40-1) won a 3-2 decision in the series with Deason, who overcame an 8-0 deficit with 14 points in the third period to beat Rolla senior Alexander Sederburg 14-11 to reach the semifinals. Rocha scored the winning takedown against Deason with 12 seconds left in regulation to better his fourth-place finish at 120 pounds as a freshman.

“I told myself after that (loss) that I’ve had a phenomenal year and I’ve made one mistake all year and it cost me in my match,” said Rocha, who placed sixth at 132 last season after a quarterfinal loss and injury defaulting out of his wrestleback semifinals and fifth-place match due to injury. “And I told myself that I’m not going to go out this year with a loss.”

Walls went 1-2 as a freshman at 170 pounds but entered ranked No. 2 at 195 this season after knocking off previously unbeaten Grain Valley senior Hunter Newsom in the Class 3 Sectional 4 finals two weeks earlier. However, Walls drew top-ranked Neosho senior Jeremiah Larson in the bottom half of the bracket.

Larson, a defending state champion, entered undefeated and rushed Walls off the opening whistle but did not get the initial takedown.

However, Larson picked up all four of the takedowns on the way to a 9-3 win by decision. Walls scored all three of his points on escapes.

“Larson’s a hell of a wrestler,” Walls (36-3) said. “He came out firing, and I got a little high flyer right off the bat, to his back. I didn’t get any points off of it, but it was probably the most fun match I’ve ever had this year. I just got to go out and wrestle as hard as I could. I didn’t come out on top, but I had a great time doing it.”

Walls came back to win his third-place match in unique — and painful — circumstances. He led Webb City senior Jacob Ott 10-0 late in the second period before an ankle injury forced him to us all 2 minutes of his injury time.

Despite being in obvious and noticeable pain, Walls opted to stay in the match with a 10-2 advantage after giving up a reversal late in the second period. He had collected five near-fall points immediately prior before suffering the injury during Ott’s reversal.

“That was probably one of the hardest things I’ve ever done, finishing that match,” Walls said. “I really didn’t want to, actually, but Burress looked me in the eyes and asked if I was going to finish it. I said, ‘Hell yeah.'”

Ott opted for the top position to start the third period, and Walls only allowed a stalling penalty point while avoiding being turned. Ott granted an escape late, but Walls’ hobbled away from danger and held on for the 11-3 win and third place.

“I’m still trying to figure out why the Webb City people didn’t just cut us. Once they start cutting us, we’re just going to have to call the match because he’s going to be hurting,” Burress said of what he told Platte County assistant coach Taylor Smith. “But they didn’t. They just rode us out for the win. He did exactly what we wanted out of him (in that scenario).”

Keuhn faced a much longer day than his junior teammates.

A No. 2 seed out of sectionals, Keuhn opened with a pin of Rockwood Summit’s Charles Ploesser (41-11) in the first round before Lebanon senior and eventual third-place finisher Colt Adkins (35-3) pinned him late in the second period of the quarterfinals.

Keuhn then collected three straight wins to close his day and come back for fifth. He started with a late takedown to earn a 3-1 decision over Fort Zumwalt South senior Kolby Conkin to stay alive.

“That got the confidence going in the right direction,” said Burress of Keuhn, who went 1-2 at state as a freshman before sitting out last season.

Next, Keuhn scored four takedowns to beat DeSoto senior Luke Bradley (30-9) in an 8-5 decision to reach the fifth-place match. That meant a third matchup of the season with Belton sophomore Zach Attebury (36-11), who had won the two previous matchups — most recently 1-0 in the Class 3 Sectional 4 finals two weeks earlier.

This time, Keuhn finally came up with the takedown that had eluded him against Attebury in other meetings. He took a 2-1 lead into the third period, but a pair of stalling warnings allowed Attebury to tie the score and send the match to overtime.

Keuhn (35-6) needed 31 seconds in the 1-minute sudden victory period to secure another takedown and a 4-2 win.

“That felt good,” he said. “Coming out with this team was something special, but I knew I was going to have to fight back for fifth after that first loss I got today. I had lost to Attebury two times this year, and this is the place to do it, you know, come back and made a statement. Glad to do it.”

All five of Platte County’s state qualifiers were Sectional 4 finalists, and two of the three district and sectional champions medaled.

Fernandez (30-4) never found his footing in a quarterfinal with Vianney senior Roman Graiff (32-7), who picked up a 6-1 decision to send the Pirates’ accomplished freshman to the backside. He dominated the next match with a 13-1 major decision over Bolivar senior Hunter Davis (25-18) in what would be his only win of the tournament.

In the wrestleback semifinals, Webb City senior Roger Carranco (30-10) controlled the action start to finish in a 12-3 major decision to end Fernandez’s tournament.

“The only freshman in the bracket,” Burress said. “He kind of got horsed in a couple of those matches, but he’ll work hard, come back, make adjustments and get better.”

Hulett (34-8) entered as a No. 2 seed at 106 and showed some nerves in a tight 2-1 win over Hannibal freshman Reign Creech (25-12) in the first round. That meant a matchup for Hulett with Neosho’s second-ranked sophomore Raymond Hembree (41-7), who came away with a 6-2 decision on his way to finishing as the state runnerup.

In wrestlebacks, Hulett was called for a penalty point in the first period against Hillsboro freshman Aidan Black (17-14), who then had a takedown that turned into a pin just 43 seconds into the third period. Hulett entered state ranked No. 6 in a deep bracket.

“I think it was a real good lesson for him in the sense that he’s gotta know to stay on his attacks, and if you don’t stay on your attacks, bad things happen,” Burress said.

Platte County entered the season with seven previous state qualifiers on the roster.

However, senior Gabe Davis was out before the season started while undergoing treatment for a rare form of cancer. In addition, the unique postseason format drawn up due to COVID-19 protocols divided each class into eight districts with the top four in each weight class advancing to a sectional. To allow for one-day state tournaments for each class, only the top three qualified for state from sectionals.

Platte County seniors Jesse Schillinger (2020 qualifier) and Drake Lacina (two-time qualifier who cut from 160 to make the lineup) both lost third-place matches at Sectional 4, as did senior Hunter Burge at 138 and junior Ben McDaniel at 152. Both were denied their first state trip with McDaniel having come up one win shy of a top-four showing and state spot as a sophomore, as well. Pirates junior Jared Parsons went 2-2 at state in 2020 at 145 but cut to 138 this season and came up short of a repeat trip.

That means Platte County will have six former state qualifiers plus McDaniel and sophomore sectional qualifiers Brody Lueders and Mar’Quese Brown next season. That means high hopes of building on this season’s seventh-place state finish and coming up just 26 points out of fourth place and a potential state trophy.

“We’ve got some kids that will help us next year that aren’t here who can step in and place,” Burress said.