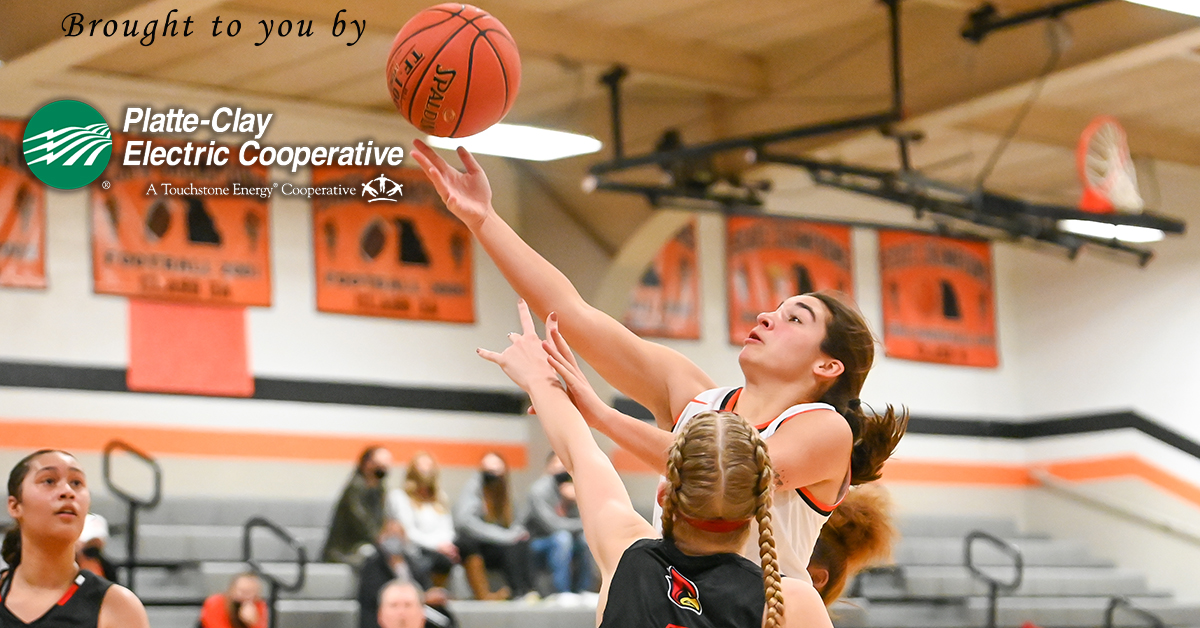 The return of Kiersten Robbins helped Platte County turn its fortunes again in what has become an up-and-down but positive season for a youthful roster. The junior center and sophomore guard Reese Pickett provided an even 1-2 scoring punch in a 36-24 win over Raytown South on Thursday at Platte County High School.

Robbins and Pickett scored 12 points apiece to account for the majority of offense, as Platte County improved to 5-4 and went over .500 for the first time this season. Robbins missed three games before a lengthy holiday break when the Pirates went 1-2 with limited scorers on a roster with just two returning starters from a year ago.

“It helps a lot because (Robbins) pulls the defense in,” said Pickett, who added two steals and two assists to her season-high in points and first game in double-digit scoring. “She’s always great to have to pass; she makes great passes and great plays so it’s great to have her back.”

Platte County lost its first two games of the season-opening Savannah Invitational but have been competitive in each game since, flirting with going over .500 on two other occasions. The Pirates finally broke through while pulling away from Raytown South early and holding the advantage throughout the Suburban Conference Blue Division matchup.

Robbins and Pickett scored eight apiece in the first half to stake Platte County to a 23-15 lead. Pirates junior forward Amaira Peterson also had all five of her points in the first half, going on to finish with eight rebounds.

Platte County went 1-for-4 on free throws in the first 4 minutes of the third quarter, but Raytown South couldn’t take advantage. The Cardinals closed within five, but a 6-0 run with buckets from Robbins, sophomore guard Joslyn Hupp and freshman Lydia Doole made it a double-digit deficit by the start of the fourth quarter.

“I think since we don’t have many players on our bench we just kind of got tired and got in our heads a little bit,” Pickett said of the third quarter lull. “But we just maintained the lead throughout the game.”

Platte County freshman guard Lydia Doole finished with four points, while Hupp had three and a team-high nine rebounds. The Pirates have won back-to-back Blue Division matchups to start the week thanks to Monday’s blowout of Ruskin. However, they face a big challenge Saturday afternoon in the 810 Varsity Showcase against Class 6 Lee’s Summit.

“It feels good, especially since we’re going to play Lee’s Summit,” Pickett said. “It (felt) good to get another win.”

The Pirates put up 25 points in the second quarter of its first game back from break Monday in Kansas City.

After leading 10-9 after the first quarter, Platte County pulled away behind the offense of Peterson (team-high 16 points) and Robbins (14 points). Seven players scored for the Pirates with sophomore Grace Hammerschmidt putting up eight off the bench and Pickett and Hupp adding six apiece.

Platte County led 35-12 at halftime and ended up with a running clock by the end. The Pirates shot 51 percent from the floor with Doole and sophomore reserve Morgan Stewart each hitting a 3-pointer.