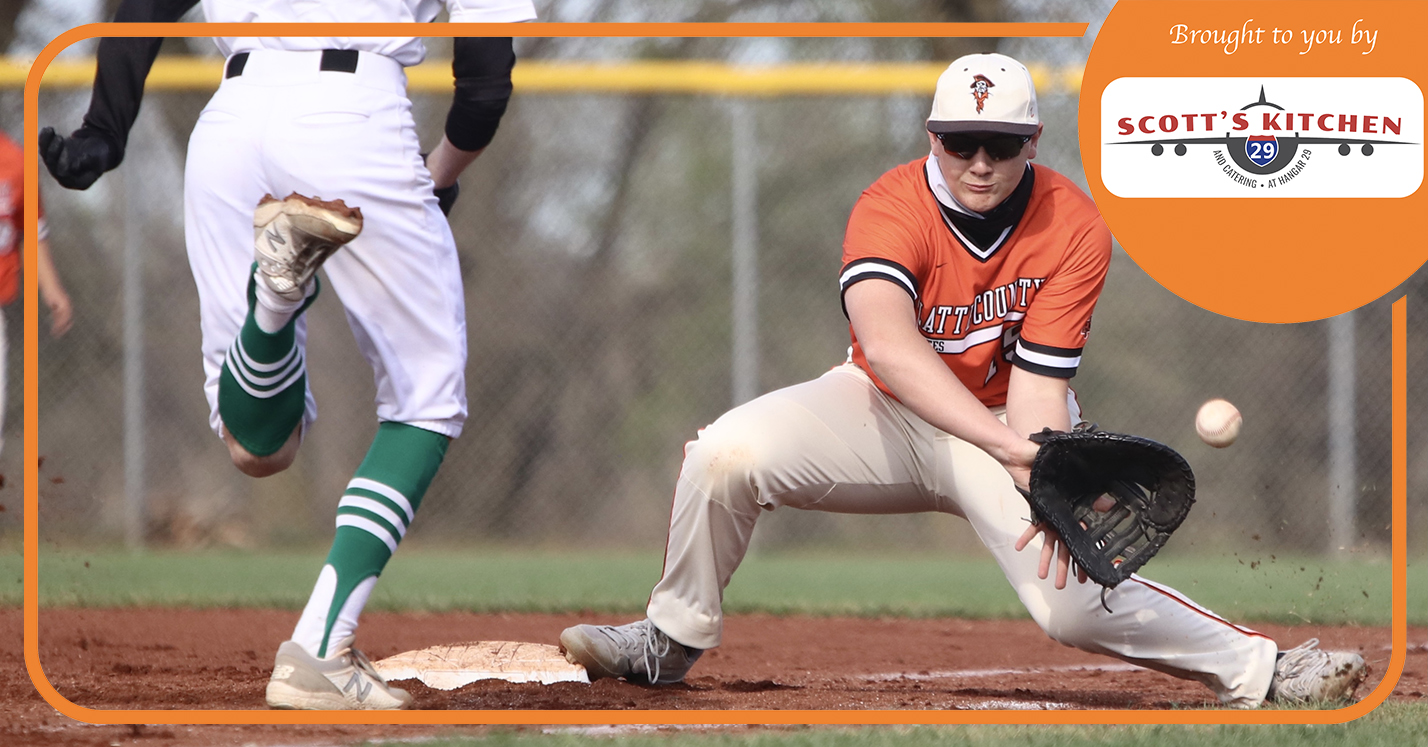 SMITHVILLE, Mo. — The opportunities were there for Platte County, but the big inning proved evasive in a key Suburban Conference Blue Division matchup.

Smithville scored four runs in the bottom of the third and eventually plated the winning run in the bottom of the sixth to escape with a 6-5 victory Friday at Smithville High School. Platte County scored in four of seven innings but had just four hits — the only one for extra bases a double from sophomore left fielder Jeter Mauzey — but never came up with one in the big spot. The Pirates had runners in every inning but the first and seventh, going down in order when another run could have extended the game.

Instead, Platte County’s six-game winning streak came to an end in the back-and-forth affair.

“We had every opportunity to win the game,” Platte County coach John Sipes said. “We just didn’t get the bloop single or drive in the gap to really open it up. We didn’t put any crooked numbers up, and that’s kind of what we like to play for is a bunch of runs, obviously. Just got to live and die by it, I guess.”

Platte County (7-2, 4-1 Blue Division) led 1-0 and 2-1 and then came all the way back to tie it 5-5 with two runs in the top of the sixth. The Pirates drew a trio of walks, starting with second baseman Ben Spence to lead off the inning. He moved to second on a sacrifice bunt from senior catcher Cayden Davis, who nearly ended up with a hit but was called out on a close play at first.

With Spence at second, Platte County senior center fielder Dayton Mitchell walked, as did junior shortstop Camron Lewis to load the bases. The Pirates closed within 5-4 when freshman right fielder Devin Wassman was hit by a pitch.

Then came an unusual play that tied the score but also kept Smithville from having to work out of a jam.

Mauzey flied out to center field, and Mitchell tagged and scored when the catcher couldn’t hold on to throw before applying a tag with an empty glove. However, Lewis attempted to move up to third, and a throw behind the runner resulted in an out due to coach’s interference on Sipes.

“Obviously, that sixth inning there I interfered with the runner and caused the third out,” Sipes said of the play. “That’s my bad and wish I could go back and do that again. That was a big killer, especially when we had bases loaded and we scored the run to tie the game.”

In the bottom of the inning, Platte County senior pitcher Landon Fulk, who came on in relief with two outs in the third, allowed a walk and a throwing error on senior third baseman Sam Peterson on the ensuing sacrifice bunt attempt put runners on first and third with no outs. The Pirates went to senior left-handed reliever Jackson McMahan, who then walked the first batter he faced to load the bases.

Smithville scored the go-ahead and eventual winning run on a sacrifice fly when Davis couldn’t handle a throw from Mitchell on a play very similar to Platte County’s sacrifice fly in the top half of the inning.

After another McMahan walk, Platte County avoided further damage on another unusual play. Mitchell caught another short fly ball in center field and threw toward home only for junior first baseman Sawyer Allen to cut the throw, and when the runner chose not to try and score, Allen threw to third. The runner returned safely, but the runner at second had wandered too far down the line and a resulting throw behind him led to a double play and the third out.

“When that happened, I thought for sure we’re going to at least tie this game,” Sipes said. “I have complete confidence in our boys. Like I was telling them there in the huddle, I don’t think we’re ever out of a game — just the way they fight and their willingness to win. But yeah, it was awesome, and you know, Dayton gets a little more on that (first) throw, and we get out of there Scot-free. It was great defense in a tough spot.”

Down just one run, Platte County went groundout, groundout and strikeout in the final inning, unable to extend the game.

Missed opportunities early ended up undoing. Both teams went down in order in the first inning before a flurry of offense in the resulting innings created plenty of drama.

Platte County struck first with Mauzey’s leadoff walk, Allen’s sacrifice bunt turned single and a walk from Spence to load the bases. Mauzey then scored on a wild pitch before Davis walked to load the bases again, but Smithville starter Caleb Sanders recorded a strikeout to end the inning down 1-0. The Warriors immediately tied the score.

In the top of the third, a pair of errors put two Platte County runners on base, and Peterson’s one-out single made it 2-1. The Pirates then stranded two more with Nick Stone flying out to the warning track in left field to end the frame.

“I would say probably just early on getting baserunners on and not taking advantage would be the most frustrating part of this loss,” Sipes said.

Smithville showed patience throughout the game. A two-out double provided the first run against Platte County senior starter Alex McClure, and the Warriors had their other four hits in the three-run third that chased him with two outs. McClure allowed four hits total and walked two while striking out three, the final one potentially ending the inning with the Pirates’ down 4-2. Instead, a low throw to first on a dropped third strike scored the fifth run and kept the inning alive.

Fulk came on and allowed a single but stranded two runners with the first of his six strikeouts.

Smithville didn’t have another hit and struck out nine times total but worked eight walks that kept the pressure on Platte County. Fulk was expected to pitch Saturday before those games were canceled due to impending weather, and Allen was unavailable due to pitch count limitations, prompting Sipes to keep McClure for his scheduled start.

“We already told Alex we were going with him, so we didn’t want to backtrack and take that opportunity away from him,” Sipes said. “We trust all of our guys. Smithville came out and jumped on him early. He got to a point where he was getting tired. He threw 30-some pitches in that inning, and we decided to go to Fulk.”

Platte County missed a chance in the fourth to draw closer after Spence led off with a single but ended up stranded at third. In the fifth, Mauzey doubled with one out and advanced to third on an error that put two runners in scoring position.

Allen followed with an RBI groundout, and Smithville wound up stranding another runner at third to keep the score at 5-3.

Platte County continued its trend of showing late life even when trailing but couldn’t survive this time. The Pirates’ recent six-game streak included four wins against conference opponents, but they will have to look to start a new streak vs. Raytown South on Monday and vs. Ruskin on Wednesday, sandwiched around a Tuesday home game against Benton.

Lewis collected four of the Pirates’ 11 hits, and four runs in the top of the sixth helped induce the run rule in a victory Wednesday in Raytown.

Platte County did most of the damage with six runs in the third to go up 8-0 and adding the final runs in the sixth. Raytown South scored one in the bottom of the sixth but needed at least three to extend the game.

Kole Jenks, a left-hander, started and recorded a complete game, striking out six and allowing five hits and no walks in six innings. He needed just 63 pitches in his first start and second appearance of the season.

Spence put Platte County up 1-0 with an RBI single in the second to score Allen, and Spence then scored on a wild pitch with two outs for the second run. The six-run third included just two hits — a single for Allen and a two-run single for Lewis. Runs also scored on Spence’s RBI hit by pitch, Mitchell’s bases-load walk, an error and a wild pitch.

In the sixth, Platte County strung together an RBI single from Mitchell to score Jake Knudsen, an RBI double from Lewis, an RBI triple from Wassmann and an RBI single from Mauzey in four consecutive at-bats. Spence finished 2-for-2 with two runs and two RBIS, while Lewis was 4-for-5 with three RBIs and two runs. Mitchell also drove in a pair from the leadoff spot.

Knudsen doubled for his only hit.