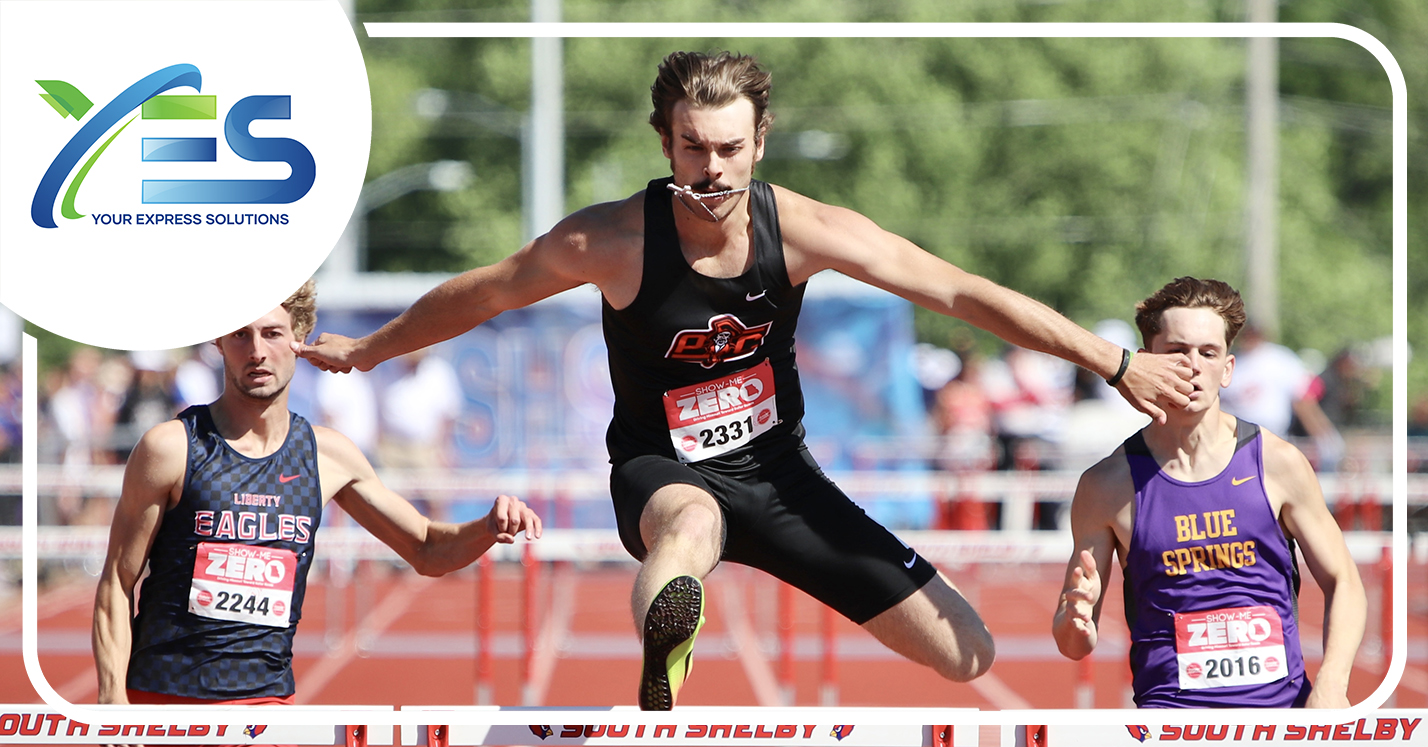 With Walls the only junior in the group, the career-defining performances came in a final competition and gave Platte County a pair of medals in the program’s first-ever time competing in the state’s largest classification. The Pirates scored 11 points in the Class 5 Track and Field Championships on Saturday at Jefferson City High School, putting them in a respectable four-way tie for 24th and just nine points out of the top 10.

Steinmeir turned in a pair of career-best times in the 300-meter hurdles and finished as Class 5 state runnerup, while the 4×100 set another school record and medaled sixth in a loaded relay field.

Surprisingly a first-time state qualifier, Steinmeir nearly continued his upset run all the way to an unlikely state title. He won the first preliminary heat from Lane 5 on Friday afternoon at 39.58, knocking off 0.41 of a second from his Sectional 4 winning time a week earlier when he slipped under 40 seconds for the first time in his career.

Steinmeir then went into Saturday’s final with the top qualifying time.

Unable to repeat recent fast starts out of the blocks, Steinmeir fell behind in his final race and found himself a somewhat distant third going to the final 100 meters. He then caught and passed Blue Springs senior Daniel Jantzen but ended up in the middle of the 1-2-3 finish at the line.

Liberty (Wentzville) senior Chase Vickrey took the victory in 39.10, while Steinmeir set a career-best for a third straight race, ending his career with a 39.14. Jantzen was third at 39.17, stumbling to the line after the final hurdle.

Like Steinmeir, Rhoden, Scott and Sewankambo earned their first state medals but needed a clutch performance in the preliminaries to make the finals and then needed to safely get the baton around in the medal race to assure a spot on the podium. The Pirates didn’t necessarily play it safe after overcoming a choppy final handoff on Friday afternoon.

Platte County finished third in the slower overall heat that also featured a Class 5 state record for Rock Bridge (41.50). The Pirates were well back of that in 43.01 but placed third with the sixth-fastest qualifying time despite Sewankambo leaving a little early for the final leg but recovering well.

In the final, Platte County held seed and finished sixth at 42.84 but trimmed time from the prior week’s Sectional 4 runnerup time of 42.89. Both performances were school records and marked the third straight weekend with a sub-43 time that beat the prior best effort in program history set a year earlier in the postseason.

Walls earned his second state medal, having run on Park Hill’s seventh-place 4×100 team in Class 5 a year earlier. He transferred to Platte County over the summer.

The other first-time medalists took unique paths to this weekend. Most notably, the 4×100 returned two members from a quartet a year ago that qualified for state in Class 4 but botched multiple exchanges and ended up disqualified in preliminaries. Sewankambo and Scott along with 4×800 qualifiers Jace Trimble and Andrew Early were the only returners this season with prior state experience, and none had medaled.

Sewankambo (long jump) and Early (3,200) were also individual state qualifiers, but the Pirates then moved up to Class 5 — a move that increased the difficulty in the postseason path. Early and Trimble were unable to advance out of District 8 in their individual races, and the 4×800 finished fifth and out of a sectional qualifying spot.

Sewankambo advanced to Sectional 4 in the 100, long jump and 4×100 and made state in both sprint events. He ran in the 100 preliminaries Friday afternoon, but a slow start doomed him to a time of 11.77 — 16th out of 16 and well out of the top eight. His career-best time of 10.86 that placed him fourth at Sectional 4 a week earlier would’ve placed him eighth in Saturday’s final when all runners went sub-11 a day after only two did so in slower preliminary races.

In eligible to start the season, Steinmeier came back in the final few weeks but struggled with injury. He had previously qualified for Class 4 Sectional 4 in the 110 hurdles as a junior but gave up the shorter race to focus on the 300s and relays to maximize his state potential after also dealing with injuries in the short run of his abbreviated season.

Scott became one of the fastest sprinters in school history and qualified for sectionals in the 100 as a junior in Class 4 and the district final as a senior in Class 5. His PR of 11.40 came in the district preliminaries two weeks before state, but he became the trusted second leg of a continuously improving 4×100.

With Sewankambo fast developing into the anchor in a breakout junior season, Platte County teamed Scott with juniors Garrett Smith-Dean and Carter Salzman to set a school record of 43.57 in last year’s Class 4 Sectional 4 race to break a mark that had stood since 2009. Smith-Dean is no longer on the roster, while Salzman — last year’s opener — dealt with an injury that limited him to pole vaulting duties this season.

Platte County continued piecing the group together before a huge breakthrough at District 8 with the first sub-43 time in school history and then bettering that each of the following two weekends.

Walls became the lead leg, bringing prior state experience, but Rhoden — signed to continue his football career at the University of Kansas — found another gear. He won a district title as a junior in the long jump and ran on the sectional-qualifying 4×200 team but had never been to state until settling in as the third leg of the 4×100 as a senior.