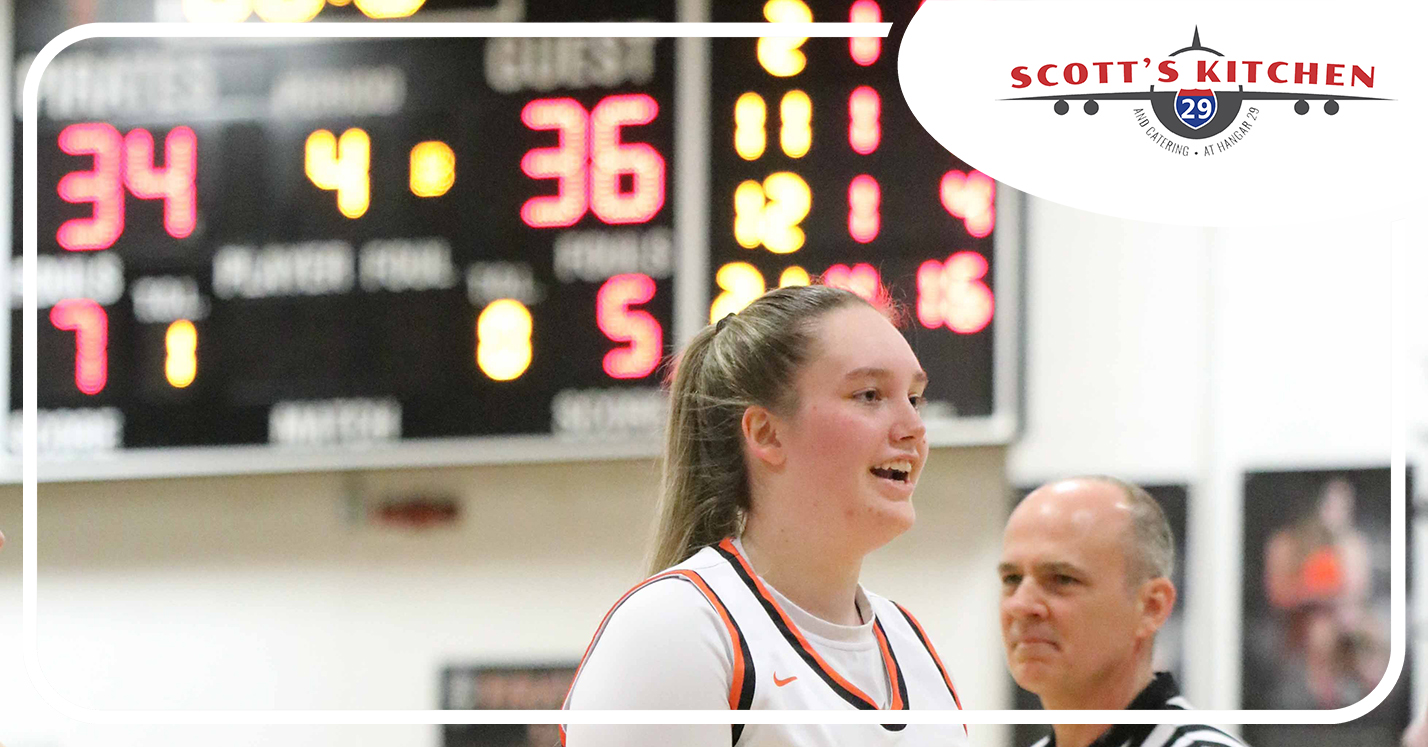 Kiersten Robbins popped open at the top of the key for another wide-open look at a 3-pointer.

With a chance to complete a shorthanded comeback, Platte County’s senior forward watched the shot float offline as the buzzer sounded. Van Horn escaped Platte County High School with a 36-34 win Saturday after in a Class 5 District 8 opener but not until surviving the final 1.6 seconds.

“That’s the name of the game when you have 1 point whatever seconds to score. It’s just a quick shot,” said Mills, who coached her final game at Platte County. “We have confidence in all of our players, and it ended up in Kiersten’s hands. She did the best she could, and that’s all we could ask for.”

Platte County (8-15) entered without freshman reserve point guard Haley Barlow, who underwent a surgical procedure on her ear a day earlier, and then lost junior leading scorer Joslyn Hupp to a right ankle injury early in the second quarter. The Pirates played well beyond its normal seven-player rotation out of necessity and lost offensive rhythm for most of the second half.

Platte County struggled at times with turnovers and missed a wide array of open shots, trailing by as much as 11 before closing within one in the final minute of regulation. Robbins scored eight of her team-high nine points in the first half, while senior forward Amaira Peterson added eight in their final games.

Platte County scored the first four points of the opening quarter but fell behind 10-8 when Blackburn hit back-to-back 3s. The Pirates then took a one-point advantage into the second quarter after Peterson hit the first of her two 3s with 30 seconds left on the first quarter clock.

Van Horn opened the scoring in the second, and Hupp went down with her injury on the next possession while attempting a layup. She had scored four points in the first quarter but spent the majority of the rest of the game with ice on her injured ankle at the end of the Pirates’ bench.

“Completely different game plan after (Hupp went out),” Mills said. “I think our girls did respond well and played hard for her and were giving it their all.”

Robbins hit back-to-back buckets to put Platte County back up 15-14 and forcing a Van Horn timeout with 4:24 left before halftime. A 3-pointer from Pirates freshman reserve Lauren Stone, earning more playing time with Hupp out, hit a 3 that sent the Falcons into the break down one point again.

The game turned early in the third quarter when Van Horn scored seven quick ones on three banked-in shots, the last a 3-pointer for Blackburn that made it 24-18.

Platte County went more than 6 minutes without a point before Robbins split a pair of free throws to end the drought and account for her final point. That’s where Hupp’s absence showed up the most. She had scored 18 points in a game twice in the closing stretch of the season, and Van Horn’s defense sagged down to limit Robbins’ touches after her fast start in the first half.

“When you take out such a major threat on the inside, it opens up their ability to double-team on Kiersten or extend out on our shooters, and that probably doesn’t happen with Joslyn (in the game),” Mills said.

Van Horn had led 29-18 when Robbins hit her free throw, and Platte County sophomore point guard Lydia Doole hit a 3 to make it 29-22.

The deficit ended up being 31-24 entering the fourth quarter after Platte County junior guard Reese Pickett sank two free throws with under a second left in the third quarter. Another 3 for junior reserve Morgan Stewart made it 33-27, and the Pirates were within 33-29 with multiple chances to draw closer.

Instead, Van Horn increased the lead to 35-29 when a defensive breakdown allowed Blackburn an easy layup with 55 seconds left.

Peterson immediately came down and drained a 3-pointer to cut the gap in half with 43 seconds on the clock, and Doole recorded a steal and layup with 33 seconds to go make it 35-34. However, the Pirates still needed to commit two fouls to put Van Horn at the free throw line, and they didn’t get it done until only 5.8 seconds remained.

Smith hit 1 of 2 free throws, but Platte County rebounded the miss, advanced the ball past half court and called timeout with 1.6 seconds left.

Out of the stoppage, Van Horn received a delay of game warning for a defender crossing the out of bounds line while defending the inbounds pass. The Falcons had seen the play so Mills called another timeout and drew up a different but similar version.

With Stewart covered in the corner, Robbins ended up with the ball but couldn’t convert the chance that would’ve sent Platte County into the semifinals with Hupp’s status uncertain to face top-seeded Smithville for a third-time this season. The Pirates lost five of the their final six and finished fifth in the Suburban Conference Blue Division standings in Mills’ third and final season as head coach.