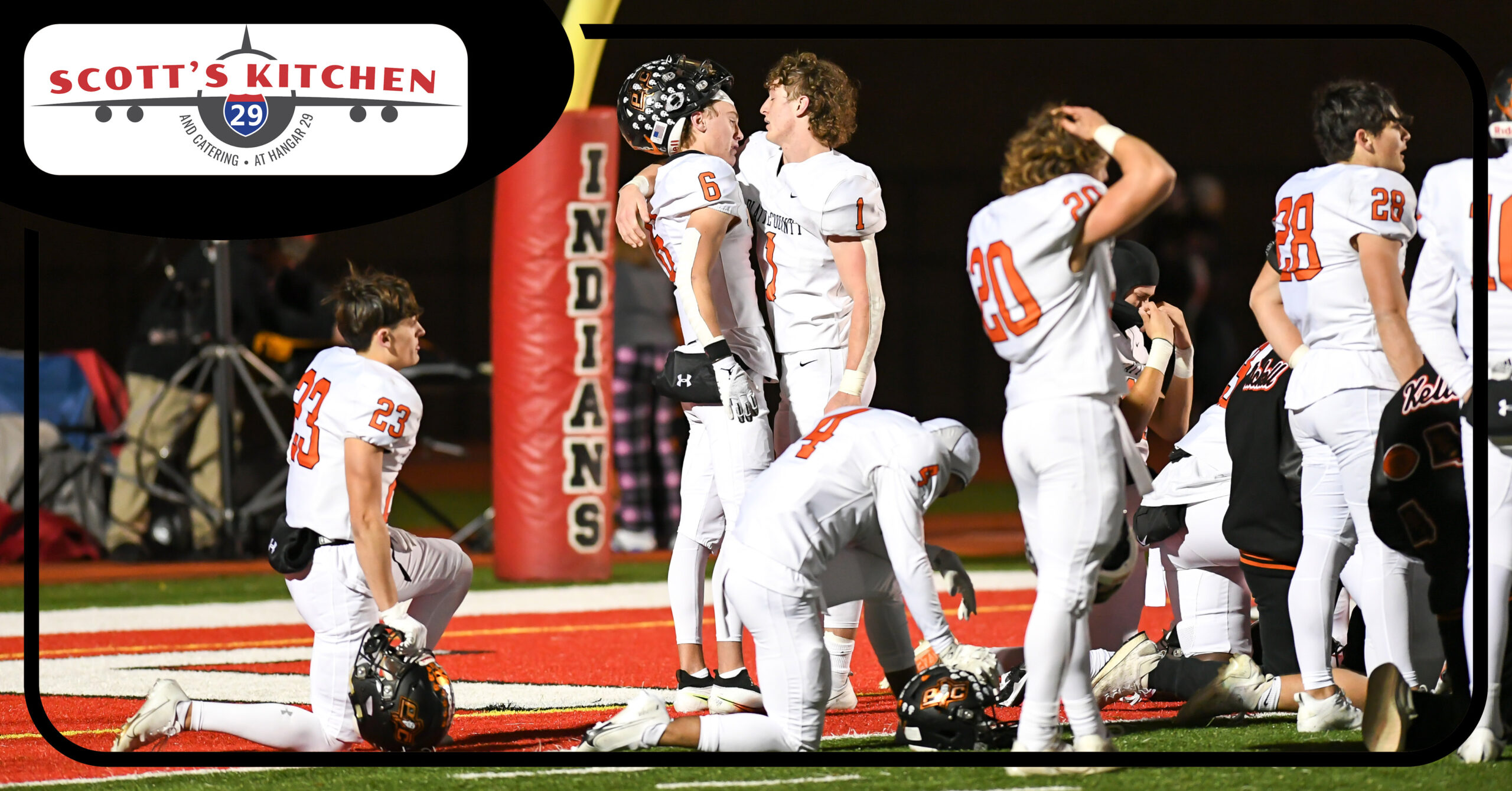 INDEPENDENCE, Mo. — Platte County’s season built to the expected moment, a chance to earn a playoff return in the Class 5 District 8 title game. The Pirates then jumped to a two-score lead in the first-ever matchup with Fort Osage on Friday.

The story didn’t play out the same way as years past.

Fort Osage used a fumble return for a touchdown and a blocked punt taken back for another score to stage a decisive second half comeback. The top-seeded Indians kicked the game-winning field goal with just under 8 minutes to play, forced a fourth and final turnover minutes later and ran out the remainder of the game to secure a 22-20 victory.

Platte County played in a seventh straight district title game and were seeking a fourth playoff trip in that span. Instead, the careers ended for the Pirates’ 18-man senior class in devastating fashion after being part of back-to-back state runnerup finishes in the previous two season — Class 4 in 2019 and Class 5 in 2020.

“I can’t single out all of (the seniors),” Platte County coach Bill Utz said. “They’re all special in their own way, and every single one played a very critical role for us.”

Platte County (9-3) gave up 19 unanswered points in a span of less than 7 minutes spanning the end of the second quarter and first part of the third quarter but showed resolve behind senior quarterback Jared Parsons, who finished 15-for-23 for 175 yards with two touchdowns and three turnovers. With the Pirates going behind 19-14 in the third quarter, he connected with junior wide receiver Carter Salzman for 38 yards two plays later to breech the red zone.

After a quick 2-yarder to Salzman, Parsons founds senior tight end Brody Fulk in the corner of the end zone for a 12-yard touchdown. The Pirates went for two in an effort to go ahead by a three, but Parsons could not find an open receiver on a play run with only 10 players on the field.

Still, Platte County led 20-19 and gave the defense a chance.

“We fought back,” Utz said. “We came down and scored and gave ourselves a chance to win the game.”

The two teams traded three-and-outs after the frenetic start to the second half.

Fort Osage came up with the key drive starting in the final moments of the third quarter and spanning nearly half of the fourth quarter. The Indians finished with just 192 yards of offense, including 84 yards rushing on 36 attempts — less than 3 yards per carry. However, 71 came on what ended up the game-winning drive.

Converting a pair of third and longs along the way, Fort Osage went from the 21 into the red zone, and eventually, Xander Shepherd hit a 25-yard field goal with 7:16 left in regulation to put the Indians back out front at 22-20.

Salzman, who finished with game-highs of five catches for 80 yards, hauled in a 32-yard reception from Parsons to put Platte County in position for a potential go-ahead score, but Elijah Bernard’s interception three play later ended the drive and ultimately the game. Fort Osage completed an initial pass for 14 yards before handing off to Javen Hall on six straight plays to run out the clock thanks to a pair of first downs.

Hall finished with 53 yards on 16 carries.

Platte County allowed more than seven points for just the fourth time this season but only 10 came against the predictably stout defense. Pirates senior linebacker Trevor Scott led the way with 11 tackles (three for loss), while senior Blaine Keuhn, the other half of the linebacking duo, added 10 more stops. Cade Fowler, a senior safety, also recorded 10 tackles (two for loss) in addition to a blocked punt and fumble recovery, while cornerback Garrett Smith (five tackles), senior safety Landon Fulk (three) and senior cornerback Dylan Mitchell (two) were also big contributors to the effort.

In the first ever meeting between the two schools, Platte County played on the road due to a pair of regular-season losses, while Fort Osage (11-1) earned the District 8 top seed with its only loss coming to third-seeded North Kansas City. The Pirates beat North Kansas City in the regular season and then again in the District 8 semifinals a week earlier to move into the title game.

Platte County looked the part of a top-10 team ready for another deep postseason run in the early going. After forcing an initial three-and-out, the Pirates started at the Fort Osage 48 and needed just six plays to reach the end zone. Parsons completed passes to Salzman (7 yards), Fulk (15 yards) and senior running back Ben McDaniel (5 yards) before junior running back Nate Walls went 11 yards on the ground for the opening touchdown to put the Indians behind 7-0 after less than 6 minutes.

The teams then exchanged three straight three-and-outs with Zimmerman pinning the ball at the 3 after Platte County’s second drive, and four snaps later, Fowler blocked a Fort Osage punt recovered at the Indians’ 10. Nate Walls ran twice for 4 yards, and a penalty moved the ball to the 1. Parsons then completed a 1-yard touchdown to make it 14-0 with 56 seconds left in the first quarter.

“Our kids have played that way all year,” head coach Bill Utz said. “They give tons of effort, and this was no different.”

The mistakes started to pile up from there.

Fort Osage gained its first first down right before the end of the first quarter, and the second came one play before Fowler recovered a fumble early in the second quarter. However, Nate Walls fumbled the ball right back on Platte County’s next drive, which had reached deep into Indians’ territory. After an exchange of three-and-outs, the Indians finally found some offense on a 35-yard completion from Menne to speedy junior wide receiver Larenzo Fenner. A 21-yard run from Hall and a facemask penalty put the ball at the Pirates’ 5, and Hall score on the next play to cap a quick 73-yard touchdown drive that sliced the lead in half to 14-7 with 1:58 left in the half.

Platte County avoided a potential disaster when officials controversially gave an interception to senior linebacker David Jacquez with 24 seconds left in the half. Parsons’ long pass appeared to potentially hit the ground with Jacquez trapping the ball, but the Indians took over at their own 26.

Menne ended up sacked on the final play of the first half, but Platte County had lost momentum going into the break.

Fort Osage did the majority of the damage when Jacquez recovered a fumble from Pirates senior quarterback Jared Parsons less than a minute into the second half and returned it 33 yards for a touchdown to bring the Indians within 14-13 after a missed extra point. Less than four minutes later, they blocked a Dylan Zimmerman punt with speedy sophomore Larenzo Fenner scooping it up and going back the other way for another non-offensive touchdown.

Even after a failed two-point conversion, Fort Osage led for the first time at 19-14 with 7:24 left in the third quarter.

“Fort Osage made a couple of nice plays that were probably a little unorthodox in most situations, and they capitalized on it, and we weren’t able to,” Utz said.

Platte County’s offense came up with the initial answer but played shorthanded the rest of the way after senior left tackle Joe Nicholson went down with an apparent broken foot right before the blocked punt that went back for a touchdown. The Pirates started a unit of Nicholson, senior Caleb Kelley (left guard), junior Sage Lutz (center), senior Connor Harmon (right guard) and sophomore Muyonta Maxwell (right tackle) for a second straight game but managed only a little over 200 yards of offense.

Nate Walls recorded four straight 100-yard rushing games late in the season after taking over primary duties after a shoulder injury caused McDaniel to miss multiple games, but he failed to break 40 for the second straight week. He ended up with just 32 yards on 15 carries, and Parsons produced his totals despite still being without two of his top three wide receivers due to broken collarbones — senior Cole Rhoden and junior Tristan Magnuson.

Platte County junior wide receiver Dayne Wimberly continued his strong play with five catches for 52 yards, and Fulk added three for 34 and the fourth touchdown of his season as increasingly important target out of the tight end spot. McDaniel added two catches for 9 yards while playing in the slot more as personnel shifted in the wake of Rhoden and Magnuson’s injuries.

With Nicholson out, Maxwell moved to left tackle with junior Jackson Eller rotating in at right tackle along with junior Brayden Parker, who continued to be limited and out of his starting role due to a hip injury. The Pirates had just three possessions after the blocked punt, one going for a touchdown and one reaching Fort Osage territory before the final turnover despite all the adversity of the situation.

Platte County envisioned a fourth playoff trip with the last three all reaching the semifinals, and the senior class looked poised to add to the growing legacy. Instead, the Pirates finished with losses to Class 6 district finalist Park Hill South (11-1), Class 4 quarterfinalist and No. 1-ranked Smithville (11-0) and Fort Osage.

The senior class for Platte County included a highly successful group of players that went a combined 32-9 the past three seasons.

No one played a bigger role than Scott, the senior linebacker with more than 40 consecutive starts and 300-plus career tackles. He played alongside Keuhn the past two years, while Jaydon Walls developed into a versatile dominant defensive end. Fowler started three years, the past two as a productive all-around safety with Landon Fulk and Mitchell as first-year starters next to him in the defensive backfield.

Parsons stepped in for two-time all-state quarterback Chris Ruhnke and started all 12 games despite entering 2021 with virtually no previous varsity experience. He threw to Rhoden for the first seven games before a broken collarbone knocked him out for two games and limited him to kicking duties in three district games, while McDaniel opened the season as a starting running back but eventually ceded much of the spotlight after the shoulder injury limited him for two games and then kept him out for three weeks. That left Brody Fulk and fellow senior Chandler Steinmeir — both converted to tight end this season — to see increased snaps and responsibilities. Even reserve defensive back Parker Hall played a key role on special teams in addition to handling some kicking for Rhoden against Raytown South and Lansing to close the regular season.

There was Nicholson, Harmon and Kelley anchoring the offensive line, while Jaisyn House opened the year as a starter at guard and provided depth late. All the way down to reserve running back Victor Sewankambo and backup defensive lineman Grant Kingery were part of a special run.

Platte County will want to make it eight straight years in the district title game. The loss to Fort Osage will be part of the fuel to return to championship heights because the players don’t accept Class 5 District 8 and Suburban Conference Blue Division runnerup after playing into December the past two seasons.