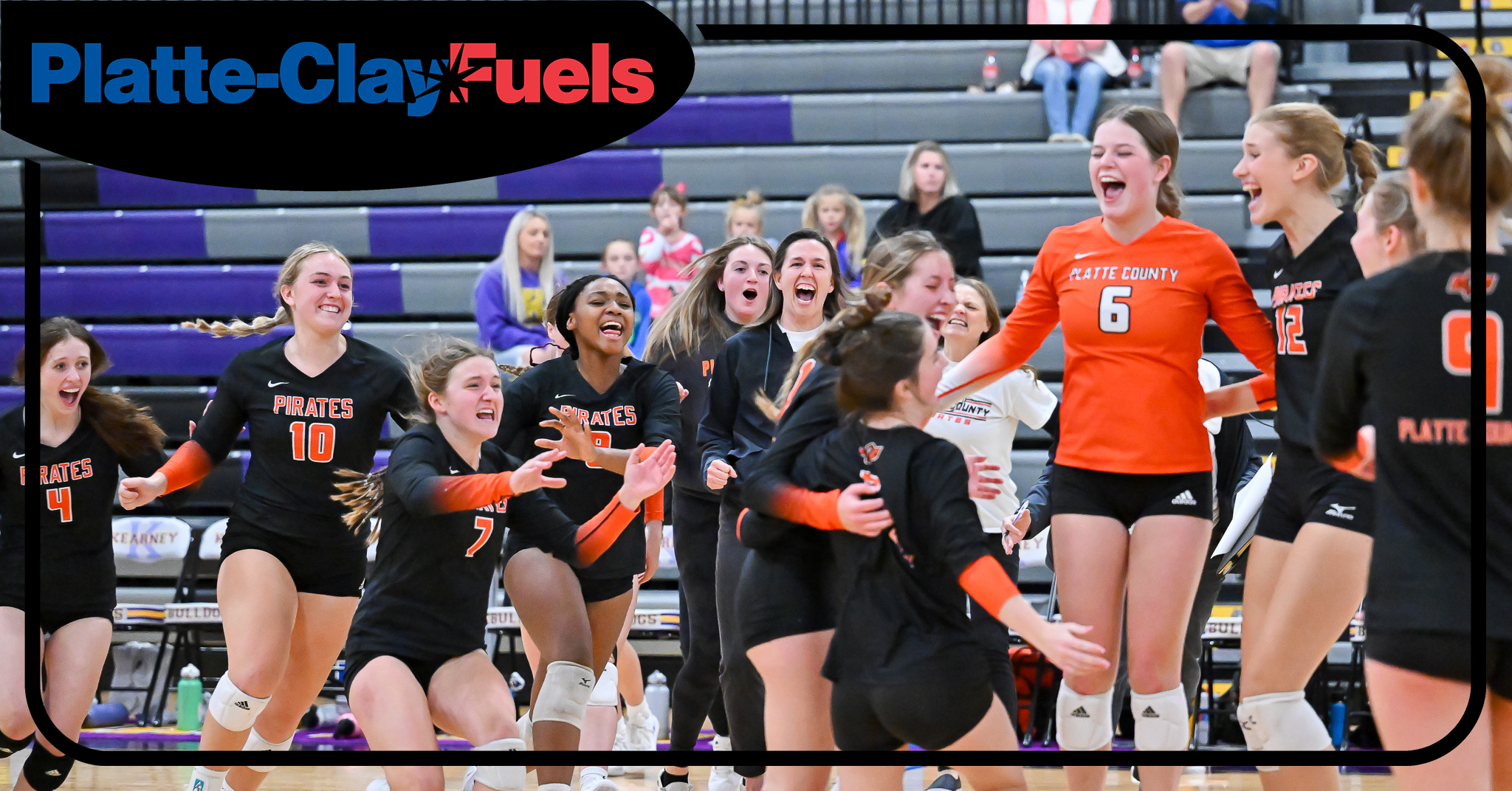 Platte County players and coaches celebrate after finishing out a win over Keareny in the Class 4 District 8 championship match Tuesday at Kearney High School in Kearney. TODD NUGENT/PC Preps Extra

Platte County’s star junior outside hitter rose up with an authoritative swing and buried a kill in the middle of the opposite side of the court. The Pirates were able to avoid further dramatics in the third set, took control of the Class 4 District 8 championship match with Kearney and ultimately survived a late challenge in a come-from-behind 14-25, 25-22, 25-23, 25-19 victory Tuesday night at Kearney High School.

The biggest of Johnson’s team-high 11 kills came in a potentially pressure-filled situation after Kearney had already staved off two set points in the third. No time to dwell on the stakes in the moment.

“It’s instinct really. I don’t have time to think about it,” said Johnson, who added a team-highs of six service aces and 16 digs plus three blocks.

Platte County (25-9) avenged a season-opening loss to a top rival in a high-stakes rematch. The Pirates advance to the Class 4 playoffs for the second time in three years and host St. Michael’s the Archangel (27-5-1) on Saturday in a quarterfinal matchup, looking to reach the state semifinals for the second time in program history after placing third at state in a historic 2020 run for the program.

In doing so, Platte County showed the development since Kearney swept the Pirates in late August, passing some tests failed the first time around with a lineup stocked with upperclassmen but somewhat limited in returning experience.

“Completely different,” Platte County Katlyn Donovan said. “I think you could see not necessarily maturity but more experience than we had with them in the first match. We still had our times of getting a little bit nervous and a little bit apprehensive, but I felt like we bounced back a lot quicker than we did in that first match.”

After closing out the third set on Johnson’s rocket angled from the left, Platte County rode the momentum to a 9-0 lead in the fourth.

Kearney opened that set with a service error, and the Pirates rolled to eight more points on the service of junior setter Emma Harned (36 assists, two blocks and 10 digs), the first-year starter thrust into a pivotal role after the graduation of school-record-setter Emerson Walter. The Bulldogs would not score consecutive points until after their deficit reached 14-3.

However, Platte County couldn’t surge straight through to winning the fourth set and the district title without some hiccups.

Kearney (16-14-3) would draw all the way back to within 19-18 on an ace from Bulldogs senior libero Kylie Walker as nerves tightened in a packed gym mostly full with invested fans. Pirates senior middle blocker Madison Hoyt came up with the last of her seven kills to avoid any chance at a tie.

Platte County closed on a 6-1 run with Johnson again supplying the conclusion with a service ace that led to a bit of an overzealous celebratory pile. The Pirates players accidentally knocked over a line judge while rushing the court before clustering near the net in a mix of hugs and smiles.

“Got a big lead, and then I don’t know if we just settled a little bit or what happened,” Donovan said. “I don’t know, just second-guessed ourselves a little bit, but in the end, did what we needed to do to get the win.”

Platte County took a difficult route to the championship despite leading 3-2 early in the first set on a pair of aces from Johnson and another from junior defensive specialist Ava Wheeler (three digs). The Pirates would eventually go up 7-4 before five unanswered points from Kearney put the Bulldogs ahead for good.

Kearney’s run hit 7-1, and a timeout from Donovan while down 18-13 could do nothing to change the course of the opening set. Dating back to the previous matchup, the Bulldogs had taken all four sets between the two teams at that point and were playing with confidence in front of a home crowd.

The response came immediately with the service of junior Avery Walter (two aces and eight digs) pushing Platte County out to a 6-1 lead. Pirates junior middle hitter Tatianna Murray capped the opening surge with one of her six kills in what was their best run of play to that point.

Johnson added two more aces in the set to start a 4-0 run, and Hoyt went high to pound down a kill that would eventually put Kearney behind 14-8. The defense also steadied up after Donovan moved junior Jenna Wheeler (11 digs) to libero, while Hoyt became more visible on the front line, recording an assist on five of the Pirates’ 10 blocks.

Platte County seemed in control until service errors started to pile up. The Pirates committed 14 total, and at one point, Kearney tied the score at 16, 17 and 18 thanks to three straight miscues.

Kearney eventually took a brief 19-18 lead, but Platte County sophomore outside hitter Karlee Riggs provided a kill — one of 10 for her — that put the Pirates back in front at 20-19. They wouldn’t trail again in the second set.

“Honestly, I think the deciding factor was that second set and knowing that we could beat them one set,” Donovan said.

Platte County started on a difficult note with the first two serve opportunities ending with errors. Kearney jumped to a 3-0 lead, but the Pirates fought back to tie it 4-4 in what became a back-and-forth tussle that also included deadlocks at 12 and 13.

Johnson’s mishit spike that rolled off her right hand and almost parallel with the net fell in to put Platte County ahead for the first time at 14-13. That started a 3-0 run for the Pirates, but Kearney answered with three, capped by back-to-back aces from senior Carlee Clawson, to forge another tie and prompt a timeout from Donovan.

Up 23-21 in the third set of the district title match, Walker made a ridiculous back-to-the-net punch save to keep a rally alive for Kearney. However, the Pirates calmly went into the normal offense with Harned setting up senior and three-year starting outside hitter Karsyn Stehlik for one of her nine kills to retain the momentum and a chance at a set point.

“I feel like that shows the growth we had from the first match to now,” Donovan said. “We’ve been in a lot of tough positions these last couple of weeks. The experience is helping us, honestly.”

Platte County then faced an oddly similar predicament from the season-opening loss. In that matchup, the Pirates came up empty on four straight set points in the third with a chance to extend the match.

Kearney closed on a 6-0 run to complete the sweep and stun a team in its first action since graduating Emerson Walter, two-time all-state outside hitter Kate Brown and Swiss-Army-knife attacker Mary Grace Hunter as the centerpieces of an accomplished 2022 senior class. This time around, the Bulldogs avoided the first two set points and needed just one point to draw back level and force a tiebreaker, first team to score consecutive points scenario.

Instead, Johnson rose to the moment — literally and figuratively — to keep Platte County stable.

“It was really exciting,” Johnson said. “It got everyone excited and carried over into the next set for us to win.”

Platte County earlier this season locked up a sixth straight 20-win season, but to reach that plateau, the Pirates needed Harned to grow into her leadership role, while Johnson, Stehlik and Riggs each took turns embracing opportunities as the “go-to hitter.” Add in a dependable combination of height and athleticism from Hoyt and Murray in the block and movable defensive pieces in Avery Walter, Jenna Wheeler, Ava Wheeler and junior Ava Filger, and the Pirates developed both depth and an identity to reach this point.

Prior to 2020, Platte County had only two playoff wins in program history have built on tradition while reaching new heights under Donovan’s guidance. The state run to third place two years ago changed the standard, and after a one-year bump to Class 5 that ended with a disappointing five-set loss to Park Hill in the District 8 title match, the Pirates were determined to make another run and now need just one more win to earn a return to the state semifinals and a chance at more program firsts.

“We went to state and thinking we were going to be in Class 4 last year and turned out to be Class 5,” Donovan said. “Pretty early on, the girls found out we were back in Class 4, and I think they just had that expectation already that if we’re in Class 4 we can put a good run together in the postseason. I think they’re finally realizing that now.”

Stehlik and Johnson recorded 13 kills apiece, while Murray and Riggs both ended up with seven. Platte County also dished out 10 service aces, including four for Avery Walter and two each for Jenna Wheeler and Johnson. The Pirates’ defense limited the effectiveness of Smithville’s attack with Avery Walter (15), Jenna Wheeler (12) and Johnson (12) all finishing in double digits for digs.

Platte County swept two matches with a chief rival, also taking a matchup in the regular season in three sets.

The Pirates advanced out of the first round with a quick 25-7, 25-6, 25-7 victory over an overmatched opponent Saturday at Kearney High School. Stehlik led the attack with 10 kills, while eight players recorded at least one ace — Murray (seven), Ava Wheeler (five), Johnson (three), Jenna Wheeler (three), Harned (two), sophomore Ava Moffitt (two), Avery Walter (one) and freshman Carissa Bacon (one).

The Pirates went into the postseason with a second straight loss after being unable to hold off Blue Springs South in last Tuesday’s home finale at Platte County High School.

Johnson recorded a career-high 20 kills in the loss, while Riggs (15) and Stehlik (10) also finished in double figures for Platte County, which also lost in five sets the prior week to Grain Valley. Despite that loss, Platte County wrapped up a fourth straight conference title and first in the White Division despite the end of a 46-match unbeaten streak in league play.