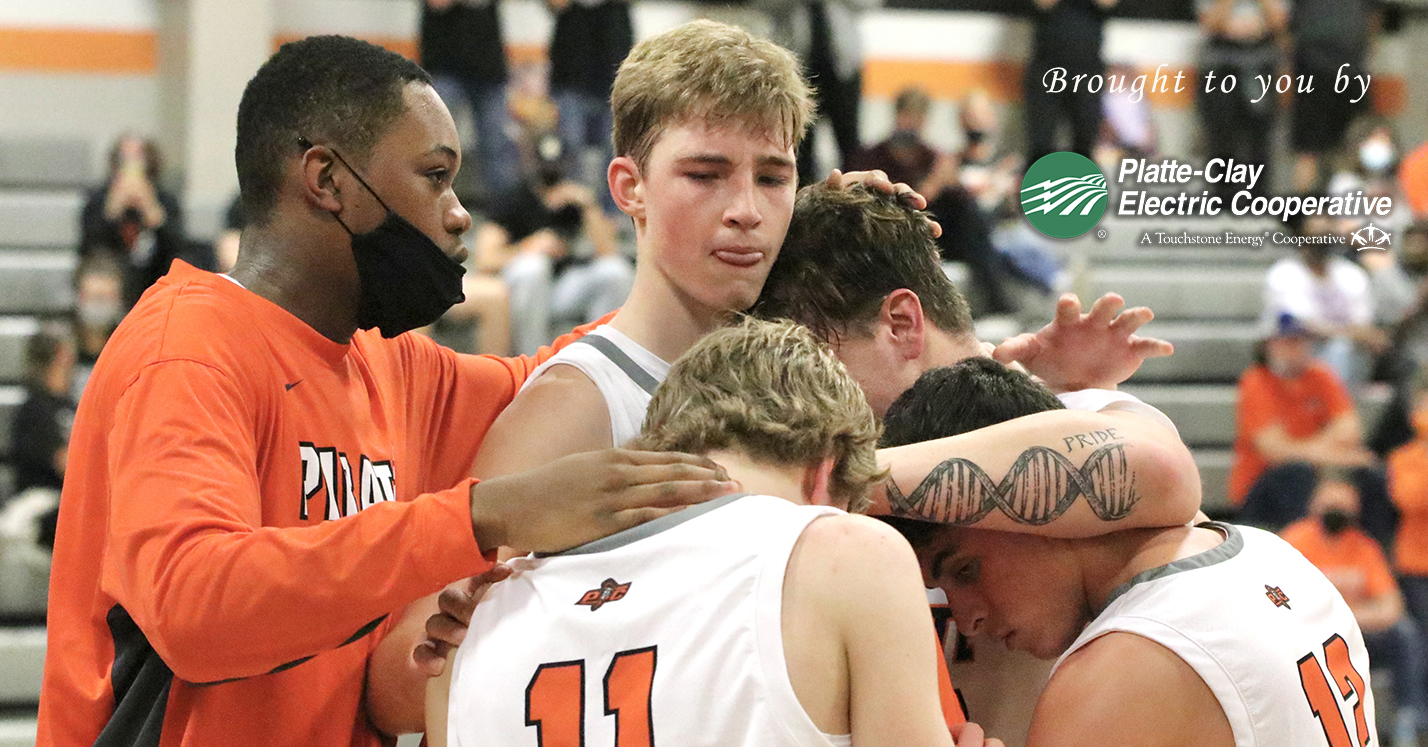 With a potentially program-defining season on the line, Platte County found a way to create suspense even when the outcome appeared to have all been but decided.

Kearney led by double digits for most of the second half of the Class 5 District 16 championship game on Thursday at Platte County High School. However, the senior-laden hosts put together a flurry of late offense, closing within one possession of the Bulldogs in the waning seconds of a frenetic final sequence.

Platte County didn’t have quite enough, a memorable season coming to an unfitting conclusion with a 54-50 loss. The Pirates finished 20-6 overall — the first 20-win season for the program since 2005 — and earned a share of just the second Suburban Conference Blue Division title in program history, consolation accomplishments that will never undo the heartbreak of not reaching the larger goals.

After a prolonged and likely emotional time in the locker room after the game, Platte County veteran coach Rick Hodge didn’t want to talk about wins. Nor losses. Nor trophies. Nor accolades. Instead, he focused on the rarity of coaching a memorable group of seven seniors.

“It was a very difficult locker room for me,” Hodge said. “But I told them it’s not just about the wins. I’m too old to worry about wins, and I’ve been coaching too long to worry about wins. This is more about their character, how enjoyable they were to coach, the way they got along together. I enjoyed coaching them so much, and this was one of the more enjoyable seasons I’ve had as a coach.

“And I’m not talking about wins. These seniors are going to be missed; these seven seniors brought a lot to the program over the years and got so much better from where they were four years ago to what they had as a team this year with success and talent. They’re going to be missed.”

Platte County senior forward Joey Schultz poured in a team-high 23 points in his final game, providing just enough to keep the Pirates within striking distance. However, the support never truly materialized an unprecedented off night for this year’s Pirates, who ended up tantalizingly close to the third district title in program history (2005 and 2010).

Platte County senior guard Jaden Burnett ended up with nine points but was called for a costly technical foul late in the third quarter before spending extended time on the bench as a result. Alex McClure, a sharpshooting senior guard integral to a late season charge, went scoreless until scoring his only two points in the fourth quarter.

Even Schultz missed four throws on two 0-for trips to the line in the second half.

“We could just never get over the hill there,” Schultz said. “Watching the film over on this game is going to suck. Nobody played their best ball.”

The No. 1 seed in the district, Platte County trailed 41-26 entering the fourth quarter, seemingly with little chance to even come close to its previous season low for scoring — 51 in a loss to Blue Springs in January.

Instead, Schultz and junior guard Jarett Mueller, the breakout leading scorer for the Pirates this season, combined for 15 points in the next 8 minutes to help make the final minute consequential. Kearney led 50-42 after going 1-for-4 on free throws spread across two key possessions, and Mueller responded by knifing to the basket to make it 50-44 with 47.7 seconds to go.

Kearney star senior guard Brennan Watkins then went 1 of 2 on free throws, and Mueller banged in a 3 just 6 seconds after his last basket to pull the Pirates within four.

“That really defined our team this year — just fighters. Honestly, that’s what we were,” Schultz said. “I knew when you have a bad start, that’s hard to battle back from in the fourth quarter. When you’re down 12 with 5 minutes to go and you lose the game by four? That really just defines our season.”

Platte County forced a jump ball on Watkins to regain possession, and McClure’s 3-point attempt from the left wing hit off the back iron. The Pirates were forced to foul again, but Kearney again went 1 of 2 to leave the door open.

Alaiwat drove the right baseline for a layup, and Platte County found itself within one possession at 52-49 with 10 seconds remaining. Watkins made his final two free throws to finish with a game-high 25 points — 10 on free throws — only for the Bulldogs to foul Mueller on a 3-point attempt.

Mueller missed the first two and made the last to make it 54-50, and despite a turnover from Kearney, there were just 3 seconds left and not enough time to complete the comeback.

Platte County’s undoing ended up coming from a prolonged scoring drought in the first half and inconsistent play in the third quarter. Burnett scored six of his nine points in the first quarter and gave the Pirates an early 5-2 lead with first of his two 3s.

Watkins came back with two 3s of his own, but Platte County led 12-11 after the first quarter following Burnett’s late bucket.

From there, Kearney went on an extended 10-0 run that lasted until the 2:47 mark of the second quarter. Platte County went scoreless for more than 6 minutes total, and the Bulldogs went ahead 21-12 despite Watkins going to the bench and briefly leaving the gymnasium with what appeared to be upper leg injury.

Watkins returned after just a few minutes and hit the 3 that pushed Kearney’s run to 10-0 and prompted Hodge to burn his second timeout. He played the rest of the way but at times visibly limped around in a gutsy performance.

“You know he’s going to get his, and he did,” Hodge said. “I thought our guys played hard guarding him as best they could, but I really felt like offensively was the story, (us) struggling to put points on the board.”

Schultz scored all five of Platte County’s points in the second quarter and five of nine for the Pirates in the third quarter. He answered a three from Watkins with a three-point play in the closing moments of the second quarter, but Kearney led 24-17 at the break.

Mueller scored a second-chance bucket on a long opening possession of the third quarter, and Schultz added another three-point play only to have the Bulldogs answer at every turn.

Kearney senior guard Tyler Carr had seven of his 14 points in the third quarter, and Platte County’s deficit hit 40-26 in the wake of Burnett’s technical foul. McClure misfired on a 3 at the third quarter buzzer that could’ve provided some momentum.

“They guarded us well. You have to give credit to them because they did guard us well,” Hodge said. “When we had opportunities, we didn’t connect, and we let them get out ahead of us too far.

“We picked a bad night to shoot the ball not very well.”

Platte County picked up defensive pressure and started to chip away. Schultz converted his third three-point play, and McClure hit his only basket in a quick 5-0 run that made it 41-31. Burnett hit his second 3 to bring the Pirates within single digits for the first time since early in the half, and Schultz provided a basket after a hotly disputed goaltending call to make it 47-38.

The two points Kearney received on the play where Schultz slapped the backboard but didn’t touch the ball while attempting to block a shot would end up looking especially critical. Hodge protested and forced a prolonged stoppage to try and verify the goaltending rule the officials were citing and never did receive what he felt was a proper explanation.

“I will say this: referees were not the reason we lost that game,” he added.

With Kearney’s lead down to 49-42, Watkins missed a pair of free throws with 1:12 to go in regulation, but officials whistled Schultz for a travel on Platte County’s ensuing possession. That set up a 1-for-2 trip to the line for the Bulldogs to make the lead eight and set up closing sequence that included a few more missed opportunities that allowed the second-seeded Bulldogs (13-9) to escape and earn a home Class 5 sectional matchup with Mexico (21-3) scheduled for Tuesday night.

“As always, they battled and played hard to the end, and we cut it close there and ran out of time with our comeback,” Hodge said.

Platte County ended up splitting a four-game season series with Kearney, which continues to mostly control the rivalry especially in the postseason. The Pirates’ season ended with a loss to Kearney for the second straight season and sixth time in seven years.

However, Platte County’s seven seniors won just 19 games total the previous two seasons, including a 13-14 mark in 2019-20, before leading this year’s revival. Most notably, the Pirates went 9-3 in Blue Division play — just the second winning mark since joining the Suburban Conference and first since winning their other league title in 2011.

“Us seniors left Platte County basketball better than we found it, and I guess, as a program, that’s kind of what you want to see,” Schultz said. “We didn’t get our end goal, but like I told (the underclassmen), they’re playing for me and what I wanted next year. I’m excited for that.”