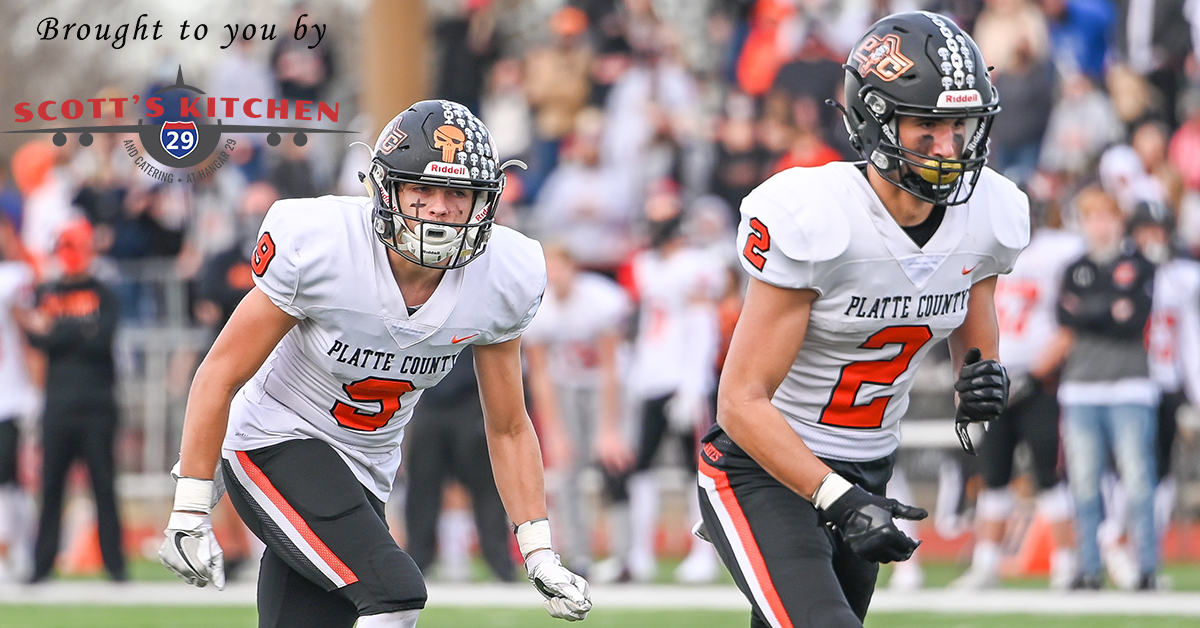 Platte County senior wide receivers, from left, Dayton Mitchell and Colby Rollins line up for a play in a Class 5 semifinal against Webb City on Saturday at Cardinal Stadium in Webb City. TODD NUGENT/PC Preps Extra

Coming off of a breakout junior season, Platte County wide receiver Dayton Mitchell entered 2020 with the potential to chase all of the single-season and career program records for receiving.

Instead, the 6-foot senior became an indispensable part of perhaps the deepest and most balanced group of pass-catchers the Pirates have ever fielded. Mitchell, seniors Colby Rollins, Joey Schultz and Kevin Hughes; junior Cole Rhoden and sophomore Carter Salzman have coalesced into a unique and formidable group that have allowed senior quarterback Chris Ruhnke to again thrive.

All six have hit double-digit in receptions, and only Hughes hasn’t found the end zone at least once.

“If we’re winning and Chris is doing good and our other receivers are doing good, I don’t really care if I get the ball or not,” Mitchell said.

However, no other wide receiver had more than seven catches.

This season, Rollins moved into the team lead for receptions in Platte County’s Class 5 semifinal win over Webb City, while his deep-ball abilities have kept him atop the stat sheet in yards. Mitchell enters this weekend’s Class 5 Show-Me Bowl with a team-high eight touchdowns. They were last season’s dynamic duo, but with both regularly facing bracket coverage and double teams this season, the Pirates needed more diversity, especially in games when opponents were able to slow the running game.

Platte County coach Bill Utz expected to perhaps have a top trio but ended up with much more through 13 games:

“It’s super fun to have this good of a receiving corps,” Ruhnke said. “If they focus and double-team one guy like Dayton, I have so many more weapons I can come back to.”

Rollins and Mitchell remain the clear No. 1 and 2 options and have mostly alternated leading the team in yards and catches on a game-by-game basis but ohters contributions have been key to Ruhnke’s big season (198-379, 2,922 yards, 28 touchdowns) that will surpass the all-state numbers he put up as a junior.

In 2019, only three players caught touchdown passes from Ruhnke — Rollins (11), Mitchell (10) and graduated running back Trey Phan (3). That number has increased to six this season with the only one to a running back; junior reserve Ben McDaniel caught one in Week 1, and all 25 since have been to wide receivers.

“Chris is one of the best quarterbacks in the city and the state,” Rollins said. “You can never ask for much more from him. He’s always making the right reads, talking to us; he’s always focused on what’s going on. He’s never sidetracked; he’s never messing around.

But even the best quarterbacks can benefit from additional weapons.

A 6-6, lanky target, Schultz recorded two touchdown catches in each of his first two games — the first two of his career having not played football since middle school before coming out this season. That included a pair in a Week 2 blowout of Kearney that Mitchell missed due to injury and that Rollins exited before halftime due to a minor hand injury of his own.

Hughes came up with career-highs of six catches for 68 yards with the receiving corps depleted in the 35-14 win over Platte County’s biggest rival, while Salzman started to show his potential with a season-high six catches of his own and 56 yards.

Rhoden also caught a long touchdown against Kearney and made it consecutive games with a receiving touchdown in the following week’s 35-12 win over Grandview with all receivers healthy and available.

Salzman continued to pick up his production throughout the year but didn’t catch a touchdown pass until the third quarter of a 31-28 comeback quarterfinal win over Grain Valley. He added two more in Saturday’s win over Webb City, which avenged last year’s Class 4 Show-Me Bowl and sent the Pirates to a second straight state championship game — this time at the Class 5 level.

While taking a starring role in the biggest game to this point, Salzman has been just fine with waiting his turn and watching Mitchell, Rollins and Schultz star.

“I’m just a sophomore, and I’m realizing that this time is going to fly by.”

Down the stretch, each of the top four receivers have taken turns coming up with big plays as Platte County came up with comeback victories over North Kansas City (Class 5 District 8 semifinal), Grain Valley and Webb City.

Mitchell caught a touchdown in four straight games between Week 8 against Raytown South and the Grain Valley thriller to give him 21 in his career before facing constant double teams each of the last two weeks. Rollins has caught a touchdown in three straight, including the go-ahead score against Webb City midway through the fourth quarter.

Schultz, who has been a consistent red zone target due to his height and jumping ability, tied a career-high with four catches, including his seventh touchdown of the season, against Grain Valley and then bettered that with five for 66 yards against Webb City in what might have been the best example of the group’s depth. Rollins and Schultz had five catches apiece, while Salzman added four and two scores with his 70 yards just one off of his season-high set in Week 1 vs. Park Hill South.

“It’s honestly just teamwork,” Rollins said. “We’re like brothers. We’re not one of those teams that tries to ballhog or tries to get it to certain people. We know Joey’s good. Joey, he’ll go up and get a ball if he needs to; he’ll get that PI. Carter’s fast, sneaky; he’ll get behind people, find windows, find holes.

“Everyone of us has our own advantage, has our own disadvantages, and we just know how to use them well.”

A part-time starter as a sophomore who broke onto the scene with a dramatic game-winning touchdown against Smithville in a 2018 regular season game, Mitchell won’t approach last year’s career-high numbers of 66 catches for 994 yards, but his two catches against Webb City moved him into a tie for second all-time at Platte County for receptions with TJ Guillory (2013-2015) at 129 and behind only Gilbert’s 168, and a big game against Jackson could help him move into second for career yards. He’s at 1,925 with Todd Jaros (1998-2000) in second all-time at 2,060 and Gilbert unreachable at 2,467.

Rollins enters the Show-Me Bowl with 18 touchdown catches in two seasons after leading Platte County with 11 in 2019.

Platte County will have a major shuffle to organize at the wide receiver position next season. Mitchell will go down as one of the all-time greats, and Rollins’ confidence and penchant for big plays will be difficult to replace.

For now, the question will be which players come up with the big catches against Jackson and how they might contribute to Platte County’s first state title in nearly two decades.