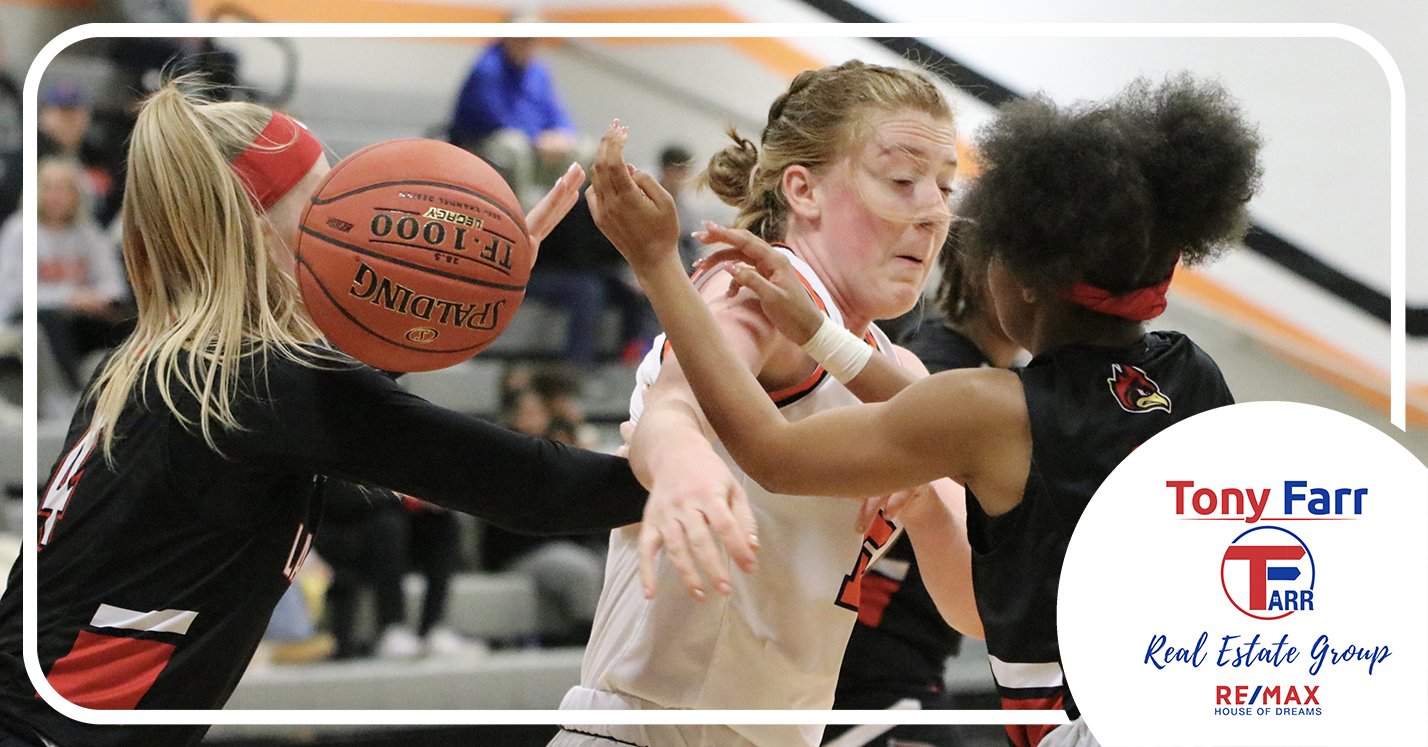 Raytown South pulled away for a 45-34 victory in Suburban Conference Blue Division play with a pressure defense that didn’t necessarily create turnovers but instead resulted in havoc and missed shots. The Pirates (3-7) entered having won two straight and 3 of 4 overall but couldn’t spring the upset and maintain the momentum.

Raytown South improved to 9-2 overall and now 3-1 in conference play with wins over Smithville and Platte County, which is off to a 1-2 start in the Blue Division double round robin. The Pirates have also been without head coach Rebecca Mills for both a win over Ruskin on Tuesday and the loss to Raytown South.

In search of a signature win after losing the first five this season, Platte County built an early 7-0 hole. The Pirates went nearly 4 1/2 minutes without a point, while Raytown South started its scoring with a banked-in 3 for junior guard Jiyani Thompson from a nearly impossible angle in the right corner. However, the lead shrank to 7-4 on back-to-back buckets for junior guard Reese Pickett (four points) and junior forward Joslyn Hupp, who led a balanced scoring effort with a team-high 10 points.

Platte County then pulled within 9-7 late in the first quarter on a driving layup for freshman point guard Haley Barlow, who continues to start even after the recent return of sophomore Lydia Doole.

The momentum carried into the second quarter as Raytown South’s offense dried up. An inside bucket for Platte County junior forward Amaira Peterson tied the score for the first time at 11-11, and she followed a defensive stop with a turnaround jumper in the lane to put the Pirates ahead for the first and only time at 13-11.

Platte County then allowed four quick points and never recovered, scoring only two more points before halftime and going into the break down 19-15. The struggles on offense continued with Peterson scoring the last of her three buckets on the way to six points early in the third quarter as the deficit grew to 27-17 with 4:24 left in the third quarter.

Raytown South hit one big 3-pointer in each quarter, while Platte County attempted to hang around despite a flurry of misses beyond the arc. Hupp had a basket to pull the Pirates within 27-21, and Doole had a steal to create a possession late in the third that resulted in three missed shots that could have pulled them closer.

Instead, Platte County trailed by 10 twice more in the fourth quarter before senior center Kiersten Robbins hit the Pirates’ lone 3 from the right wing with 2:52 left in regulation to make it 37-30. The big shot didn’t spark a run, and Raytown South scored four straight to go up a game-best 11, which ended up being the margin of victory.

Platte County continues a tough stretch with home games next week against Class 6 Lee’s Summit (4-6) on Tuesday and Benton (10-4) on Thursday before a long stretch of key conference games starting at Winnetonka on Jan. 18.

The Pirates earned their first conference win of the season Tuesday at Platte County High School despite missing 19 free throws.

The struggles at the line allowed Ruskin to stay close the entire first half before scoring just two points in the third quarter to fall behind too far. Platte County opened the second half on a 6-0 run to make it 29-18 and prompting a timeout from the Eagles. The Pirates’ lead ballooned to 36-20 going into the fourth quarter when Barlow scored five of her career-high 19 points to help preserve the win.

Ruskin hit a pair of 3s in the fourth quarter, while Platte County went just 2 of 8 on free throws. The Pirates also missed their first five at the line in the first quarter, but Barlow and Pickett combined for 10 points in the first 8 minutes to stake them to a 12-9 lead.

Platte County was just 2 of 5 on free throws in the second quarter, but Barlow reached double figures with four more points while Doole hit the Pirates’ lone 3 to send them into the break up 23-18.

Hupp, Pickett and junior guard Morgan Stewart all finished with six points apiece for Platte County, while Doole added five and Robbins and Peterson four each. Peterson came off the bench as the Pirates continued to tinker with the starting lineup in search of the right rotations for more consistent offense.

Robbins hit a pair of free throws in a one-and-one situation with less than 10 seconds left in regulation to preserve a comeback win for the Pirates on Dec. 22 as part of the Twelve Courts of Christmas Showcase at HyVee Arena in Kansas City.

Platte County Trailed 19-6 against hot-shooting Cameron before Pirates junior reserve guard Abby Reynolds took advantage of some rare playing time to hit a key 3-pointer to close them within 10 late in the first quarter. Pickett hit a 3 in the second quarter to close the gap to 19-16 and making it a 7-0 run. The Pirates ended up scoring nine unanswered after a pair of free throws from Robbins made it 19-18 with 2:54 left before halftime.

Cameron continued to lead and took a 25-20 advantage into the second half when Stewart found her range on the way to a career-high five 3-pointers. She hit back-to-back shots from beyond the arc early in the third quarter, the second from the the left win to give the Pirates their first lead at 26-25.

A few moments later, Stewart hit another 3 from nearly the same spot to make it 30-27, and Doole, playing her first game after a lengthy layoff due to COVID protocols, broken a 34-34 tie early in the fourth quarter with another triple. Stewart’s final 3 made it 42-38, as the Pirates continually kept Cameron from making another big run after the early outburst.

Pickett’s 10-foot jumper made it 44-40 Platte County with 4:03 to play when offense went cold for both teams.

Cameron trailed by one possession with the ball coming out of a timeout with under a minute to play in regulation when Barlow forced a turnover. Robbins drew a foul and went to the line for the two clutch free throws.

Stewart hit her first 3 to open Platte County’s scoring, but Cameron used a 9-0 run to build its original 19-6 lead.