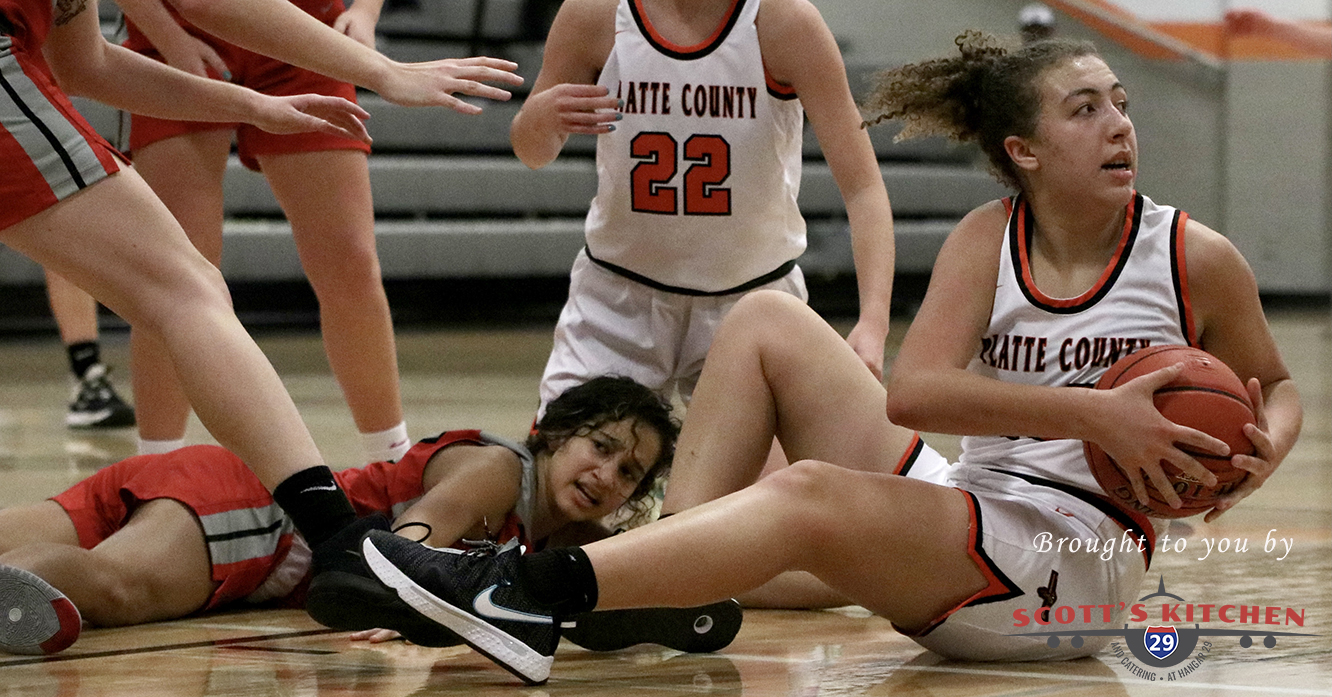 Unexpectedly shorthanded, Platte County’s youthful roster nearly found a way to keep a modest winning streak going in its home opener Thursday night. The Pirates held a lead for most of the second half against Fort Osage at Platte County High School, but the inexperience showed late.

Turnovers and foul trouble piled up for Platte County, and Fort Osage held on for a 41-37 win despite a frenetic final minute.

“Missed layups and turnovers, you know?” Platte County second-year coach Becca Strobbe said. “I think our girls just panicked being young, inexperienced. I feel like there’s not enough days to work on the things we need to work on, but there’s improvement.”

Platte County sophomore Joslyn Hupp scored a team-high 11 points, while sophomore Reese Pickett added eight before fouling out in the fourth quarter. Only five players scored for the Pirates, who were without emerging junior forward Kiersten Robbins.

Just six points came from the bench — a pair of 3-pointers for sophomore Morgan Stewart in the second half.

Stewart’s second 3-pointer early in the fourth quarter gave Platte County the lead for the final time at 31-30. Fort Osage responded with 10-2 run, and the Pirates were unable to complete the comeback.

Platte County (2-3) closed within 40-35 on a pair of free throws from Hupp with 51.2 seconds left in regulation, but the Pirates were just 4 of 14 overall at the line. Fort Osage committed three straight turnovers in the next 20 seconds, but the only points for Platte County in that span came on a layup from freshman Lydia Doole, who missed another one seconds later that would’ve closed the gap to one.

“We’re learning; we’ll get there — a lot of promise for the second half of the season,” Strobbe said.

The theme of the game turned out to be scoring droughts that went back and forth.

Fort Osage led 4-0 early with Platte County struggling against the Indians’ press. They then went more than 6 minutes without a basket and trailed 7-4 after the first quarter, but a 3-pointer from Brooklyn Gilpin tied the score early in the second quarter.

That started a 9-0 run, and Platte County trailed 13-7 before Pickett hit a long jumper from the right wing with 1:09 left before halftime. The Pirates had just two points in nearly 9 minutes spanning the first and second quarters, but back-to-back buckets from Hupp sent them into halftime down just 14-13.

“We probably had seven to 10 missed layups in that first half, and we were down one,” Strobbe said. “Layups has been the biggest things, but in game speed. We have a hard time replicating game speed in practice.”

Pickett’s jumper from the right wing on the first possession of third quarter gave Platte County the lead back, and Fort Osage had just one free throw in the first four minutes of the second half. Stewart hit a 3 to make it 23-19, but the Indians answered with a three-point play to draw the fourth foul on Hupp.

Platte County’s lead was 25-23 entering the fourth quarter, and Pickett immediately picked up her fourth foul. The resulting two free throws tied the score, and a 3 from Doole, who finished with six points after being moved into the starting lineup, made it 28-25 and set up the final back-and-forth action.

With only two returning starters, the end-of-game situations were another learning experience as Strobbe looks to build up confidence in her players even in defeat.

“We’re playing teams that are on our level so those close games, we’ve just got to learn how to win,” Strobbe said. “Being young, learning how to win is hard, very hard.

“We’ve just got to keep reminding the girls that we’re building a foundation, not a skyscraper right now.”

Amaira Peterson, a junior guard/forward, also finished with six points for Platte County, which took the opportunity to honor lone senior Kylene Loy before the game. Senior night was moved up, as it has been for other sports, due to uncertainty for the season related to concerns with the pandemic.

Robbins (12), Peterson (11), Doole (10) and Stewart (10) all finished in double figures, and a big third quarter helped the Pirates pull away for a second straight win Monday in St. Joseph.

Platte County outscored Lafayette 22-4 in the decisive third quarter. Pickett recorded two of her four steals and scored five points, while Doole tallied seven of her 10 in the quarter. Pickett also had a team-high five assists.

Peterson finished with a double-double, adding 13 rebounds to her 11 points, while Hupp had three points and eight rebounds for Platte County. Doole and Stewart hit a pair of 3s apiece.

Platte County started Loy, Pickett, Hupp, Peterson and Robbins, which Strobbe expected to be her preferred lineup moving forward. The Pirates will be without Robbins until after the holiday break, and Doole could receive extra starts as a result.