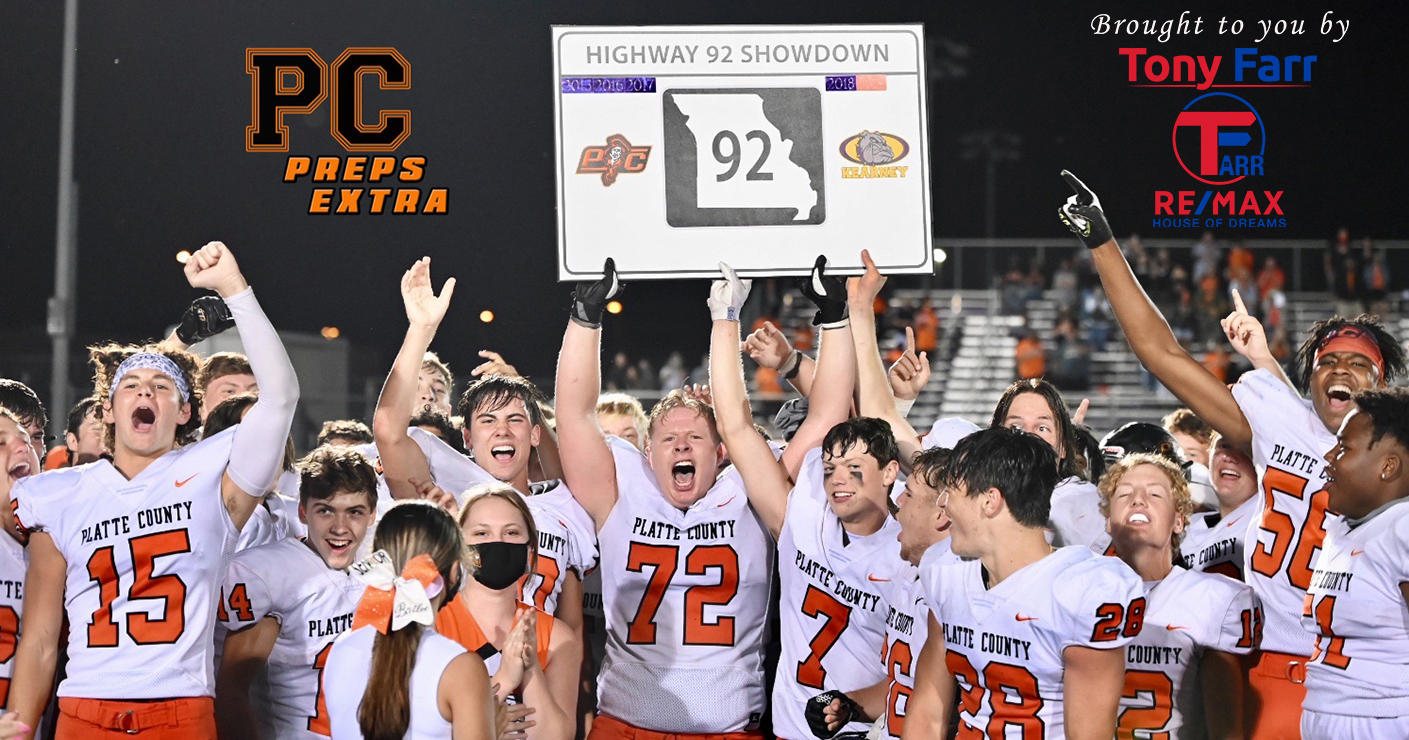 KEARNEY, Mo. — Kearney sophomore Luke Noland sprinted up the middle of his home turf and returned the opening kickoff of the second half 91 yards for a touchdown.

Already shorthanded and up against a historically frustrating rival, Platte County needed a response to avoid a potential game-altering swing of momentum Friday at Kearney High School. The Pirates never looked fazed, marching 86 yards in 2½ minutes in an efficient drive capped with senior running back Cayden Davis’s second touchdown run.

Back up 14, Platte County remained in control and held on for a comfortable 35-14 win over Kearney — the second straight for the Pirates in the often contentious series with their down-the-road nemesis. Davis ran for two touchdowns, and Platte County senior quarterback Chris Ruhnke threw three touchdowns, two more to 6-foot-7 senior wide receiver Joey Schultz, to add another orange sticker to the Highway 92 Showdown rivalry trophy and leave any talk of long losing streaks to the Bulldogs in the past.

“We faced some different adversity,” Platte County coach Bill Utz said. “To see those adversities and be able to fight through it, it’s a big step.”

Davis’s 1-yard touchdown plunge made it 28-14 with 9 minutes, 11 seconds left in the third quarter, and Ruhnke added his second touchdown pass to Schultz just before the fourth quarter to all but seal the result.

Ruhnke finished 24 of 38 for 292 yards and now has more than 650 yards and seven touchdowns through the air in just two games. Impressively, much of the production in Week 2 came without his top two receivers.

Due to a minor injury suffered in practice earlier in the week, Platte County senior wide receiver Dayton Mitchell — the team’s statistical leader in receptions and receiving yards in 2019 — didn’t dress out, and fellow senior Colby Rollins got dinged up in the first half and did not play after halftime.

“I’m still bummed (Mitchell) was out. I hope he’s back next week, but you have to step up,” said Platte County senior wide receiver Kevin Hughes, who received his first career start with Mitchell sidelined.

Instead, Schultz grabbed four passes for 62 yards, including a highlight reel catch and run in the second quarter, in his second career game. Carter Salzman, a sophomore, caught six passes in his second career start for 56 yards, while junior Cole Rhoden had two catches for 58 yards and hauled in Ruhnke’s other touchdown pass. Ruhnke also connected with Rollins three times for 24 yards before he exited, and junior running back Ben McDaniel and Davis had one catch each out of the backfield.

Ruhnke even completed a pass batted in the air at the line to himself for 1 yard, but perhaps the most important contribution came from Hughes, who hauled in career highs of six catches for 68 yards. He had two 9-yard catches on the early third quarter drive, the second nearly putting him in the end zone before Davis scored the 1-yard touchdown on the next play.

“We’ve been pretty blessed with our receivers,” Utz said. “Kevin had a great game. Honestly, Joey did what we knew Joey could do. We knew Kevin could do it; he’s never had the opportunity, so he got the opportunity and made the best of it. Really, he made some nice plays and some catches that kept things going. To give credit where it belongs, he probably deserves it.”

Kearney did little on offense, scoring one touchdown on a trick play and the other on special teams. The Bulldogs ran the ball 32 times for just 97 yards and were outgained 410-161. They also made two key mistakes — the first an Ian Acosta interception thrown straight into the hands of Platte County senior safety Luke Filger to set up the game’s final touchdown. The Pirates also had sacks from Filger, junior linebackers Trevor Scott and Blaine Keuhn and sophomore defensive end Chandavian Bradley as the Bulldogs turned to the passing game late.

Kearney’s other turnover came when Hughes recovered a muffed punt on special teams, allowing Platte County to run out the final 2:19 and improve to 2-0 on the season.

“Whatever we can do. We’re out there, if the balls in your hands, just make a play. That’s all you can do,” Hughes said.

Kearney’s initial mistake wasn’t a turnover but created a big issue. After forcing Platte County into an initial punt near midfield, the Bulldogs gambled on a fourth and one inch situation at their own 20, and on the play, Platte County senior defensive tackle Alex Stearns stood up Acosta and Pirates senior safety Collin Tyson finish up the stop.

The chains came out, and Kearney appeared to lose a small amount on the play to result in a turnover on downs. Three plays later, Davis rumbled into the end zone from 10 yards out to make it 7-0.

Five plays later, Kearney punted the ball back, and Platte County quickly made it a two-possession game in difficult fashion. A 12-yard run from Davis put the Pirates first and goal at the 10, but the next snap went over Ruhnke’s head, and he chased it down for completing a pass to Salzman for minus 10 yards. Salzman then caught a pass for 16 on the next play, and Ruhnke lofted a jump ball to Schultz for a touchdown on third and goal from the 4 to make it 14-0.

Just like in Week 1, Schultz caught both of his touchdowns on highly lofted jump balls where he easily outleaped the defenders.

“The first one (was better). The second one I just about dropped,” Schultz said. “That first one, it was a great ball from Chris. When you have Chris throwing you the ball, you’re good; you’re golden.”

Kearney followed with its best drive of night, spanning the end of the first quarter and into the second quarter. On a second and 7, the Bulldogs dialed up a trick play with Acosta taking a pitch on an end around and throwing a 35-yard contested touchdown pass to Dawson Meinert, the team’s second quarterback.

With the lead down to 14-7 and Rollins out of the game, Platte County needed just two plays to answer. Ruhnke completed a 20-yard pass to Salzman then found Rhoden streaking down the middle of the field behind double coverage for a 44-yard touchdown — the first of his career.

Rhoden, also the kicker, added the extra point to make it 21-7.

“We have so many threats as a receiving corps, I really think that no matter who Chris throws it to we have a chance for a touchdown every time,” Schultz said.

Ruhnke’s only mistake kept Platte County from more points shortly before halftime. A holding penalty wiped out his scrambling 10-yard touchdown run, and on the next play, he forced a pass into the end zone that Kearney intercepted to keep the deficit at 14 points.

Kearney then had its potentially game-altering return touchdown, but Platte County didn’t wilt and continued to rewrite the recent history of this rivalry. The win was dominant even if the scoreboard didn’t fully show the disparity.

The defense again keyed the effort, and there’s potential for that unit to continue improving.

Platte County even ran the ball more effectively than in Week 1 with Davis finishing at 94 yards on 17 carries, just missing his first 100-yard game of the season after rushing for more than 1,000 yards in his junior season. The Pirates again revamped the offensive line with junior Joe Nicholson going from left guard in the preseason to left tackle a week earlier and right guard against Kearney.

Jesse Schillinger, a senior and first-year starter, kicked out from guard to left tackle, while seniors Grant Gomel (center) and Colby Guffey (right tackle) remained in place. Trey Butcher, the fourth senior on the line and only returning starter, now seems entrenched at left guard after being the expected left tackle.

“Maybe a little bit of it’s the change, a little bit of it’s just the experience,” Utz said. “They’re such an inexperienced that any play helps. Getting the first one under their belt, and then coming to this, we were able to see what we needed to work on, and they responded to it. I thought they did a lot better.”

All in all, there were few dramatics in the rivalry game for a second straight year after Platte County ended an eight-game losing streak in the series with a 51-14 win in 2019. This year’s celebration was a little more subdued for the Pirates in accepting the metal trophy sign, but the outcome remains important after often looking up to Kearney in the Suburban Conference Blue Division standings.

Platte County took the conference opener for both teams and took an important step toward another Blue Division title after earning a share of the last two. Goals for the Pirates remain lofty, but they still start with beating rivals like Kearney and Smithville, competing for the Blue Division crown then advancing to district titles and deep playoff runs, like two Class 4 state semifinal appearances in the past three years and the program’s first-ever Class 4 Show-Me Bowl appearance a year ago.

“It means more as time goes on,” Utz said. “We have to look at these week to week. We have another game next week, obviously, but we’ve never won over here — at least not in my tenure. To get two in a row, that’s a big milestone so it’s good for our program.”

The potential for a letdown in Week 3 should be slim when Platte County hosts Grandview (1-1), which lost 42-0 to Park Hill South one week after the Pirates toppled the same team 35-17. However, Grandview won last year’s meeting between the two teams in upset fashion to close the regular season, forcing Platte County to share the Blue Division title with Smithville.

Platte County already avenged one of its four losses from a year ago with the Week 1 win vs. Park Hill South and can make it 2-for-2 this week.