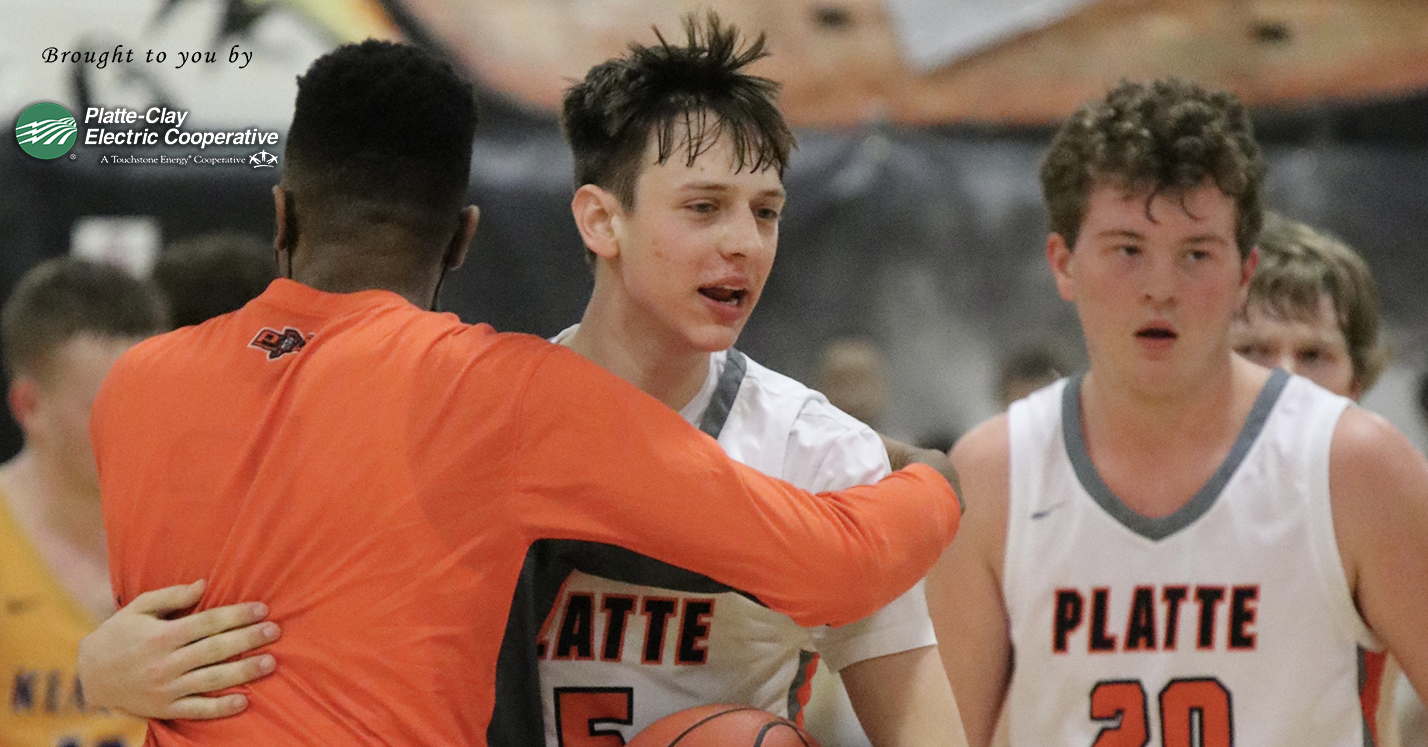 Platte County senior Joey Schultz hit a leaning jump shot from just inside the free throw line to give the Pirates the lead for good with 42 seconds left in regulation Friday night at Platte County High School. Kearney ended up with three shots spread across two final possessions with a chance to either take the lead back or tie the score.

The first clanged off the iron. Schultz blocked the second along the baseline. The third carried well long as the buzzer sounded.

Platte County held on for a 57-55 win to maintain control of the conference race, avoiding a bid for Kearney to erase a double-digit second half deficit and earn a sweep of the teams’ two Blue Division matchups.

Kearney senior guard Brennan Watkins poured in a game-high 31 points and nearly engineered a comeback after the Bulldogs fell behind 38-26 in the third quarter. They trailed from late in the first quarter until Watkins hit his fourth and final 3 with 1:30 to go in regulation to make it 55-54.

On the decisive possession coming out of a timeout, Schultz — a 6-foot-7 senior forward — took the ball on the left wing and drove hard to his right toward the lane before pulling up for the jumper to give Platte County the lead back at 56-55.

“Joey brought that up in the locker room after the game,” Platte County coach Rick Hodge said. “He told me, ‘Coach, that was a bad shot.’ I said no it’s not. I said we needed that shot taken at that time because points were tough to come by. We had the ball in the guy’s hands that we wanted; he was taking him off the dribble. He got to the mid-range. Was it a contested shot? Yes. Was it defended? Yes it was.

“But when he shot it, I kind of felt like that was the shot we needed to take because at that moment in the game, I’m not sure we would’ve got a better shot on that possession.”

Watkins didn’t take the shot on the next possession, and Kearney’s right-wing jumper clanged off the rim.

Fulk grabbed the rebound for Platte County and tried to quickly outlet the ball to a teammate, but a foul was called first. He went to the line in a one-and-one scenario and hit the first but missed the second, leaving the Pirates with a 57-55 advantage and 18 seconds to play out.

“Just settle down, follow through and make my free throws,” Fulk said of his mentality in the pressure situation.

Kearney’s final play saw Watkins drive the left baseline, only to have Schultz knock the ball away. Fulk originally grabbed the ball, but Kearney knocked it loose and misfired again at the horn. McClure ended up clutching the ball as players from Platte County’s bench tried to encourage somewhat of a celebration.

“(Watkins) drove, and Joey had a really nice block,” Fulk said. “And I grabbed (the loose ball). I might’ve got fouled, but (the official) didn’t call it and I let it go.

“It was a little crazy, and they missed it and we ended up getting the win and that’s all that matters.”

Platte County improved to 15-3 overall and 6-2 in Blue Division play — a half game up on Ruskin. Grandview remains a game and a half back, but Kearney now two full games back at 4-4 following the loss in the crowded conference standings.

Now on a four-game winning streak since back-to-back conference losses at Kearney and Smithville, Platte County is scheduled to play at Raytown South (3-3 Blue Division) on Tuesday, weather permitting, with another important game as the Pirates chase a Blue Division title.

“I think we did lose a bit of our swagger back there — Kearney and Smithville back-to-back,” McClure said. “We took a blow there. We had a couple of meetings as a team, and we really got back to what we do best.”

Platte County and Kearney had split their first two matchups of the season. The Pirates took the first meeting in the championship game of the season-opening Savannah Invitational but lost the rematch in conference play in late January.

Kearney hit a pair of 3s in the early going to take an 8-4 advantage, but Mueller answered with two 3s of his own to make it 10-8. The Bulldogs turned the ball over on three straight possessions, leading to Mueller’s two 3s and then another from McClure to force Bulldogs coach Dillon Starzl into a timeout with 3:38 left in the first quarter and his team down 13-8 after the quick 9-0 burst.

Platte County used backdoor cuts for layups and open 3-pointers to build the early advantage. Watkins led Kearney right back, and his 3 gave the Bulldogs an 18-17 advantage late in the first quarter — their final lead for the next 24 minutes.

Mueller hit another 3 moments later to make it 20-18, and he scored 11 of his 16 in the opening quarter. Platte County junior guard Jace Trimble added a 3 on the Pirates’ first possession of the second quarter, and a steal from Schultz that resulted in a cutback basket for him on the next possession made it 25-18, the largest lead for either team to that point. Mueller added his fourth 3, and Schultz netted an up-and-under wraparound layup to prompt another Kearney timeout with 1:26 left in the half and the Bulldogs down eight.

Kearney managed six points total — one field goal, a 3 from Watkins — in the second quarter and trailed 31-24. Trimble earned the defensive assignment on Watkins with Burnett out nursing his sore ankle, and the Division I-bound guard score all six for the Bulldogs in the second quarter.

McClure had a 3 to spark a 7-2 run for Platte County that made it 38-26, but Trimble went to the bench with foul trouble soon after. Watkins started to find his rhythm again against the Pirates’ box-and-one with Mueller becoming the main defender until Trimble could make it back on the floor early in the fourth quarter.

“I mean we’re just trying not to let Brennan kill us there,” Fulk said. “We can make him take tough shots, get the rebound and keep it moving, keep them behind and just grind it out.

“Jace worked his butt off tonight guarding that kid, chasing him around the whole court.”

However, Watkins keyed Kearney’s 10-0 run over the next four minutes erased the deficit, but the Pirates didn’t give up the lead at any point in the third quarter despite the prolonged scoring drought. Fulk hit a bucket late in the third quarter, and Platte County senior guard Daunte Alaiwat hit two free throws to keep the Pirates up four going to the fourth quarter.

“We did have some good looks,” Hodge said. “We weren’t quite finishing on the inside; we had some open looks on the perimeter that we weren’t hitting. But as long as they’re doing the things we preach about all the time, as long as they’re moving the ball, sharing it, playing together and getting the shots we want, that’s all we’re asking as coaches.

Kearney guard Tyler Carr had a free throw on a potential three-point play that would’ve broke a 42-42 tie, but instead, Fulk assisted McClure on a 3 and added a layup in transition for a quick 5-0 run.

McClure then added his fourth and final 3 moments later to put Platte County ahead 50-46 near the midway point of the fourth quarter.

“I’m not gonna lie, I was feeling it tonight a little,” McClure said. “Obviously, they probably weren’t the best shots that we could’ve got, but I was feeling it in rhythm and I just pulled it.”

Kearney would tie it at 52-52 before Trimble, who scored seven points, converted a runout layup that immediately proceeded Watkins’ go-ahead 3. Schultz came up with the game-winning bucket, just as he did in a key Blue Division win over Ruskin in early January.

The four straight wins have Platte County back on track after a stretch of three losses in five games derailed an unbeaten start to the season.

The Pirates went on the road to sweep the season series with the Griffins on Tuesday in Kansas City.

Burnett didn’t score after injuring his ankle early, but Mueller went for 21 and Schultz added 21 as Platte County pulled away in the fourth quarter. The Pirates led 36-25 at halftime behind 16 points for Mueller, who hit three 3s in the first quarter.

Schultz also had a rare 3 in the first quarter, and Alaiwat (five points) made it six total from beyond the arc with another trey in the second quarter.