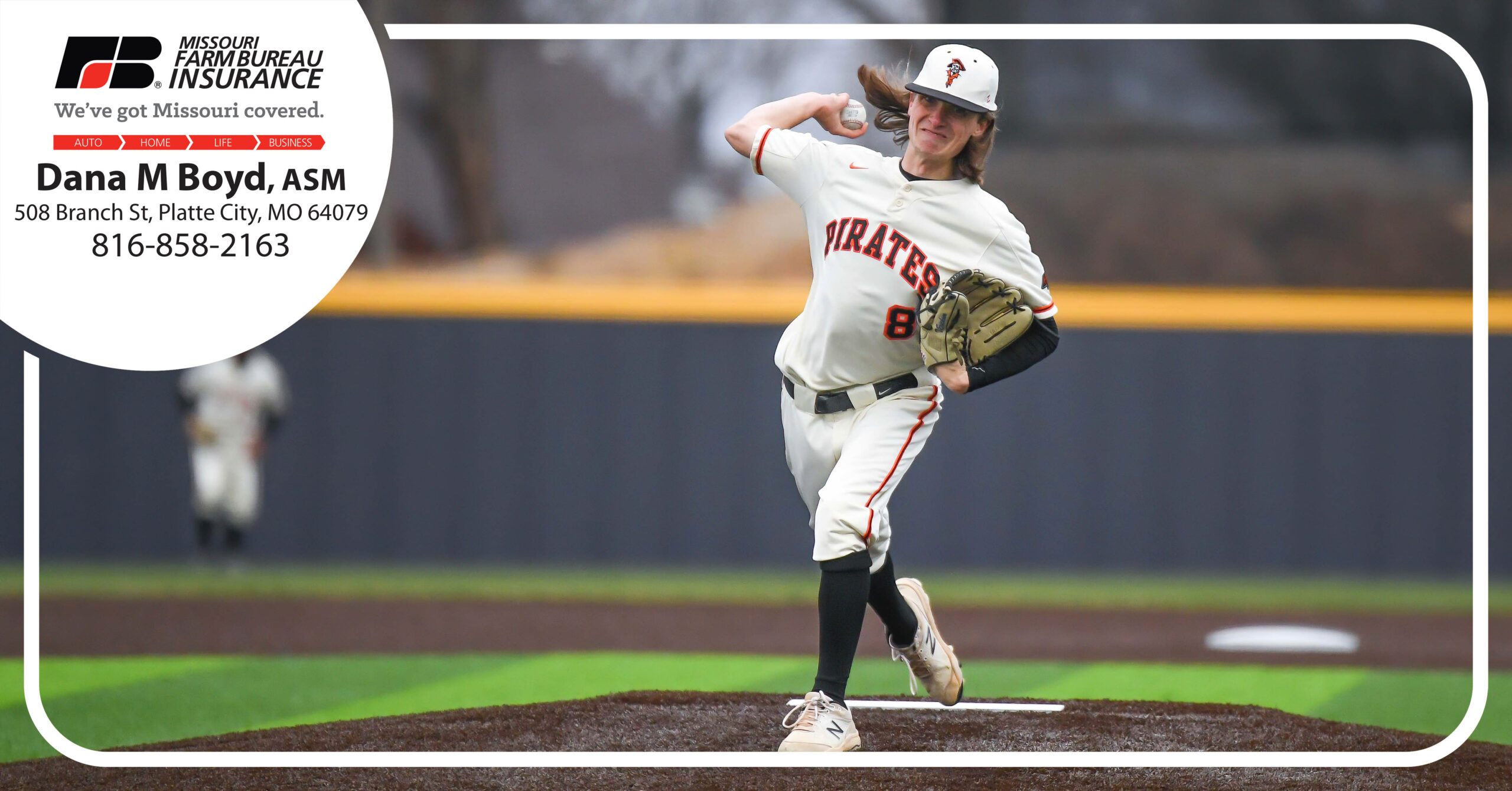 Platte County saw an early five-run lead completely evaporate leading to extra innings only for the home plate umpire to eject Smithville star centerfielder Ryker Edwards after he tossed his bat in frustration after striking out to end the bottom of the eighth. He then dismissed a group of Warriors fans from the field for being upset with the decision. The Pirates immediately responded to score two runs and take the lead on junior infielder Nick Baker’s RBI single in the top of the ninth only for the Warriors to force junior reliever Tyler Erickson to navigate a no-out, bases-loaded jam to close out a wild 9-7 victory at Smithville High School.

After opening the week with a shutout conference loss to Kearney, Platte County (10-5) closed with four straight wins, none more important or unique than Friday night. The Pirates led 6-1 after the top of the fourth but had missed key opportunities to add to the lead, hitting into an inning-ending double play in a five-run first and leaving the bases loaded in a scoreless third.

Smithville came back for three runs in the fourth and three more in the sixth to the score at 7-7 and then left a runner in scoring position with a chance for a walkoff win in the seventh.

Neither team had a runner in the eighth, but Platte County sophomore center fielder Devin Wassmann opened the top of the ninth with a single after Edwards’ ejection. After a sacrifice bunt, Baker singled to center to bring home Wassmann to put the Pirates back in front at 8-7. Two walks — the second one intentional — loaded the bases, and Smithville pitcher Andrew Hedgcorth hit freshman second baseman Dayton Doll with a pitch to force in another run and a potentially important two-run lead.

Hedgcorth stuck out the next two batters to keep the deficit at 9-7.

Smithville then loaded the bases on two singles sandwiched around a walk against Erickson, who ended up pitching 3 2/3 scoreless innings of relief. He struck out the next batter after falling behind 3-0, then induced a groundout back to him that he threw home for a fielder’s choice and cutting down the runner at the plate and ended the threat with a pop out to senior catcher Jake Knudsen.

Erickson finished with four strikeouts, while working around four hits and two walks. Baker went 3-for-5 at the plate with two runs scored and an RBI, while senior designated hitter Eli Nelson scored twice while walking twice out of the No. 4 spot in the lineup.

Platte County spread out 13 hits, but senior shortstop Cameron Lewis’ double went for extra-base hits. The Warriors also walked nine and hit five batters. The top of the first started with Lewis, who went 1-for-5 but reached base three times, hit by a pitch, and Pirates junior first baseman James Schwieder followed with a single.

Both runners scored on an error later in the inning to make it 2-0 on one play, and Platte County senior outfielder Landon Fulk and Doll later both walked with the bases loaded to make it 4-0 despite only one hit to that point. Pirates junior outfielder Dayne Wimberly then singled home a run to extend the lead to 5-0 before Smithville came to bat.

Platte County stranded five runners total in the next two innings, and Smithville clawed one back in the bottom of the second against Pirates senior starter Sawyer Allen, who ended up allowing four runs in four innings with two strikeouts and a walk.

In the top of the fourth, Platte County broke back through on Fulk’s RBI single to extend the lead back to five runs at 6-1. Lewis came home on a passed ball in the fifth to make it 7-4, but Smithville came all the way back with three runs in the bottom of the sixth against senior reliever Kole Jenks, who went 1 1/3 innings and gave up three hits and two walks while striking out two.

Erickson inherited the bases loaded when he came on in the sixth and immediately allowed all three to score on a double. However, he worked around a pair of runners to keep the game tied at 7-7.

Platte County put two runners on in the seventh with singles for Knudsen and Fulk, who finished 2-for-4 with two walks and two RBIs. Smithville worked out of the jam and then stranded two runners in the bottom of the seventh against Erickson.

With the win, Platte County improved to 5-1 in Blue Division play, having split the first two matchups with fellow contenders Kearney and Smithville. The Pirates move to nonconference action Saturday at Blue Springs South and Tuesday at Benton before hosting a conference doubleheader with Ruskin on Wednesday.

Holding back pitching for the Smithville matchup, Platte County sophomore Brayden Carter threw 6 1/3 scoreless innings Thursday in a win over the No. 3 team in the first Missouri Baseball Coaches Association Class 6 poll of the season.

Platte County scored a run in the second and two in the third and then made the 3-0 lead stand up. Carter yielded only four hits and two walks while striking out three before Erickson came on to record the final two outs and collect his third save of the season. He entered with the bases loaded before inducing a shallow flyout and a poppet to end the threat and complete the shutout.

Wassmann went 1-for-3 with a double, RBI and run scored. He doubled home Lewis, who reached with a one-out single, in the two-run third and then scored on Nelson’s RBI single. Knudsen had an RBI single to score Nelson in the second that originally put the Pirates ahead 1-0.

The Pirates walked off the second game of the doubleheader Wednesday at Platte County High School on junior Dylan Zimmerman’s infield single to score Baker.

Platte County scored in all five innings with Lewis going 3-for-3 with a double and three runs scored. Eleven of the Pirates’ 12 hits were singles, and Allen went 2-for-4 with two RBIs. Nelson finished 2-for-2 with a walk and two runs scored.

Schwieder earned the win for Platte County, going four innings and allowing three runs but only one earned on two hits. He struck out six, while senior Brett Domann pitched a scoreless fifth with a strikeout.

Platte County took a 2-0 lead in the bottom of the first on only one hit, and the Pirates made it 9-1 with a seven-run second that featured a two-run single for Allen and an RBI infield single for junior catcher Cameron Dean. Wassmann added an RBI single in the third to make it 10-1 before Raytown South closed the gap with two unearned runs as a result of an error in the fourth.

Platte County senior Patrick Sullivan, pinch-hitting for Doll, came up with a two-out RBI single to score Nelson in the fourth, and Dean scored on a passed ball before Zimmerman’s two-out single finished the game in the fifth.

In the opener, Fulk and senior Kyle Box combined on a two-hit shutout. Fulk allowed both hits but struck out five 3 2/3 innings, while Box walked one but struck out two in 1 1/3 innings.

Wassmann, Nelson and Knudsen, who continues to split time behind the plate with Dean, had a double each among Platte County’s 10 hits with Knudsen driving in three runs on two hits. Schwieder finished 2-for-3 with three runs scored, while Nelson scored twice. The Pirates plated four in the first, two in the third and four in the fourth while playing as the visiting team in the conference doubleheader.

In the first, Lewis led off with a walk and scored on stolen bases and passed balls right before Wassmann walked with one out. Knudsen capped the four-run inning with a run-scoring single to center field. Nelson doubled home Wassmann after he doubled to lead off the fourth, and Knudsen’s two-run double made it 10-0 later in the inning after Schwieder had singled home Nelson.

The Pirates opened the week with their first Blue Division loss, managing only four hits Monday in Kearney.

Fulk went 2-for-3 with a pair of singles, and Platte County drew only two walks. Kearney plated five runs against Allen, the starting pitcher, and Erickson in the bottom of the fourth inning. The Bulldogs made it 6-0 with a solo home run in the fifth against Erickson, who allowed two hits and two walks in 1 2/3 innings.

Allen went the first 3 1/3 innings with six strikeouts, while yielding four runs in five hits and a pair of walks.

Doll led off the game with a walk, but Platte County didn’t have another runner until Fulk opened the third with his first single. Both runners ended up stranded at second, and the Pirates left Fulk at third and Wimberly at first in the bottom of the fifth.

Lewis singled and Allen reached on an error in the sixth, but Platte County left two more runners and went in order in the seventh.

The Pirates came up with three runs in the top of the sixth in a Saturday afternoon road game for a swift and decisive comeback win.

Savannah managed only four hits against Fulk, Jenks and Erickson but held a 2-0 lead after the second inning. Platte County came up with only six hits, two apiece from Doll as the leadoff hitter and Allen in the cleanup spot, but only one came in the three-run sixth.

Allen led off that frame with a single to shallow left field, and Schwieder walked to put two on with no outs. A one-out walk for Baker loaded the bases, and Dean scored a run with a fielder’s choice groundout to second base.

Then the inning really became interesting.

Fulk started and allowed single runs in the first and the second, despite allowing only one hit. A walk, a hit batter and a single led to Savannah’s first run, and two walks and two hit batters led to the second.

Platte County had at least one runner in each of the first six innings before going in order in the top of the seventh. Baker walked twice, two of six free passes Savannah pitching handed out.

Savannah put the tying run at second with two outs in the seventh, but Erickson induced a game-ending line out to left field for his second save of the season.