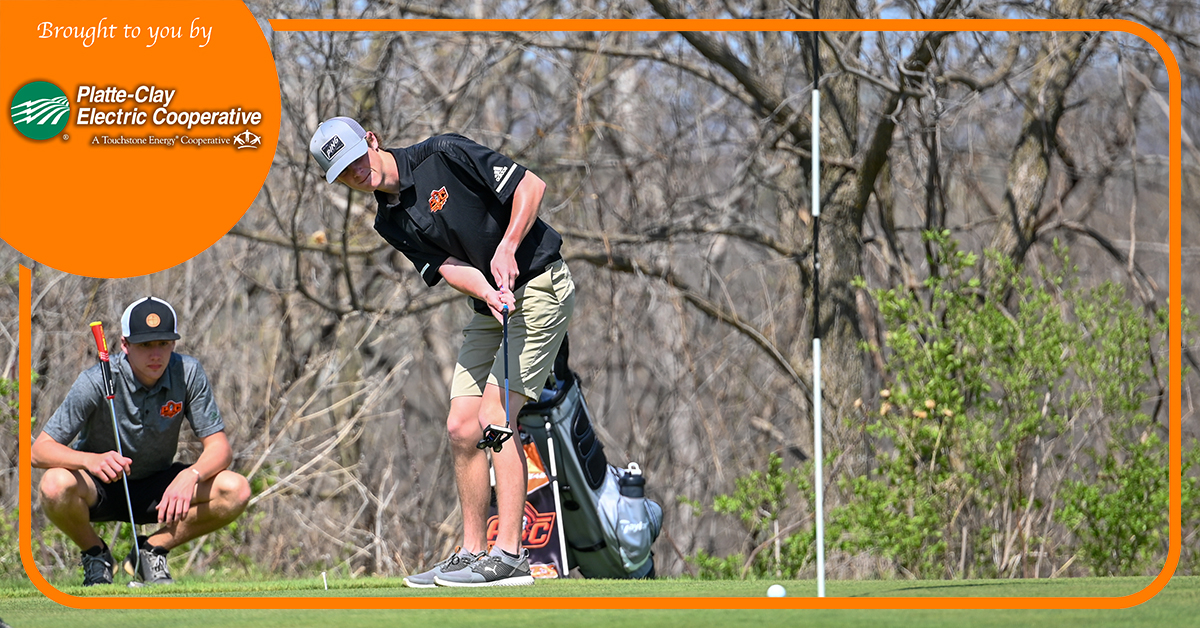 With senior Evan Handke’s drive safely in play, Parker Amos decided to take out his driver and take aim at the green on No. 11.

Platte County’s top duo in Monday’s Pirate Scramble Invitational sensed the need for a strong closing hole. Amos, a sophomore, landed his tee shot in light rough before calmly chipping an approach for a tap-in birdie to conclude a 3-under 68 round in the uniquely formatted tournament.

Amos and Handke ended up placing third overall and helping Platte County to a tie for second out of 19 in the final team standings.

“Evan hit a good shot. He laid up,” Amos said. “I just kind of hit it and hoped for the best, and it was about 10 yards from the green.

“That was just a good chip, and we ended up last hole birdying so it was pretty good.”

For the scramble format, Platte County coach Trevor Short mostly let the players pair up themselves.

That meant Amos and Handke stayed atop the lineup, while seniors Grant Gomel and Lakin Talley were the No. 2 team and carded a 4-over 75. There was a slight shift with freshman Garin Walton making his varsity debut alongside sophomore Carson Childers. Only the top two individual scores factored into the team score.

Staley ended up with the top two individual pairs and took the team title with an impressive 125, while Platte County’s 143 tied with Rockhurst for second overall.

“We had a great tournament and had a great time,” Short said. “We enjoy this tournament because it actually allows teammates to work together during their rounds. During normal playing rules, players are not allowed to give advice to their teammates as they are playing. This is a great way for our players to use their strengths combined with their partners strengths to post quality scores.”

Starting on No. 12, Amos and Handke carded five straight pars to open their round but moved to 3-under with three birdies in a span of four holes — Nos. 17, 1 and 2. However, they made bogeys at Nos. 3 and 5 around a birdie at No. 4 and eventually went to the final tee box still at 2-under.

With Handke teeing off first, Amos ended up just outside a frontside green bunker. Handke’s second shot came up well short, but Amos calmly pitched up to within inches of the hole before tapping in the birdie to close on a positive note.

Still, there was some disappointment in in missing a few chances and ending up just four shots out of second place.

“I think we got a little tired,” Amos said. “I don’t know. A couple of short putts that we missed ended up being the killers.”

Gomel and Talley finished in a tie of 16th, just outside of the medals given to the top 10 pairs in the field. They started on No. 11 and immediately made bogey before taking the shot back with their lone birdie at the par-3 12th. The next seven holes were all pars, but the closing stretch included bogeys at No. 2 and No. 9 plus a double bogey at No. 8.

Walton and Childers shot an 80 and ended up tied for 22nd.

Platte County fielded two teams, and senior Connor Dean and sophomore Jackson Gabbert placed 20th with a 78 to lead a ninth-place team finish for the Pirates’ second six. Mason Horsman and freshman Brayden Tinder tied for 29th with an 85, and senior Colby Guffey and freshman Sal Bradley shot an 87 to tie for 33rd.

The strong results showed Platte County’s depth with the majority of teams in the top half of a field of 59 two-man teams.