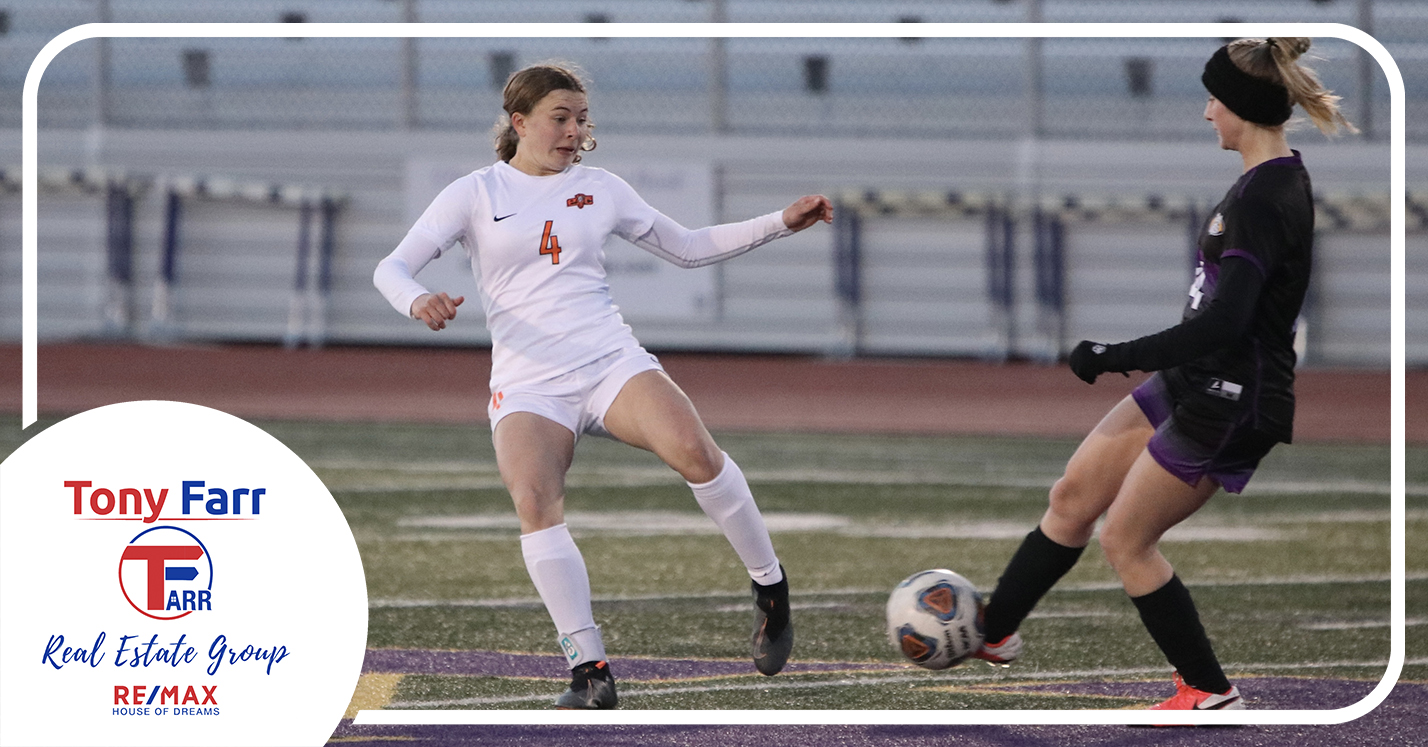 KEARNEY, Mo. — Platte County envisions a different winning formula, but for now, the results are acceptable. Despite a concerning amount of injuries and absences piling up, the Pirates continued winning ways with a 2-0 shutout of rival Kearney on the road Thursday night.

The current winning streak hit four, and Platte County owns a 5-1 record despite having all-state senior forward Hannah Stone, senior forward Aleah Dixon, sophomore Addison Bradley and freshman goalkeeper Finley Kaser missing for the most recent game. Dixon and Stone have essentially yet to play, meaning the Pirates have been without their top two options up front.

Platte County continues to rely on the striking ability of senior attacking midfielder Riley Smith while protecting freshman emergency goalkeeper Annabel Beeman at all costs. The approach worked again in a fifth straight victory over Kearney with junior Sloan Kassen causing an early own goal, Smith striking a short time later and Annabel Beeman keeping a clean sheet behind a somewhat makeshift backline.

“At the same time, we don’t want to just rely on Riley,” Platte County coach Ashlyn Brantley said of Smith, who has tallied 10 of the Pirates’ 20 goals in the first six game with at least one in all five of the wins. “That’s what we worked on this week — attacking runs — so that we have those supporting roles. Yeah, we know she’s going to be taking those chances when she gets them, but we still want to be available and create other options. Other teams know who she is. If they decide to shut it down, we need other options.

Platte County, which won all four meetings against Kearney last season, needed just eight minutes to strike for the opener on a blustery cold evening at Kearney High School. The top returning option at forward with Stone and Dixon out, she attacked down the wing before sending in a cross. A defender tried a clearance, but the ball instead hit a teammate’s back and went into the Bulldogs’ own net.

Kassen then set up Smith’s goal with a nicely playe through ball for a 2-0 lead in the 18th minute.

“We created those chances. We were getting in behind,” Brantley said.

As the temperatures dropped, so did the offensive chances for both teams.

Smith continued to be the main threat and ended up accounting for all five of Platte County’s shots on goal. In the 22nd minute, she created a turnover in Kearney’s defensive half and fired a shot wide from just outside the 18-yard box. She then set up freshman Ryleee Burress for an attempt from about 12 yards out only for the forward’s creative flick with the outside of her foot to also fly wide left.

The final chance for Platte County came in the closing seconds of the first half when Kassen sent in a cross, only for the ball to come back out to her on the left wing. Her inviting followup cross drifted across the face of goal without the Pirates able to find a touch that would’ve resulted in a likely goal.

“It’s always nice to have options,” Brantley said, “and then getting that experience going forward.”

In the 53rd minute, Kassen played a short pass to Smith, who then slalomed about 60 yards through the middle of the field before taking a shot that went just over the bar.

Platte County’s final best chance came in the 76th minute when Smith’s through ball appeared to set Burress loose on the left wing only for the offsides flag to come up and negate the run. The Pirates controlled possession and chances while continuing to deploy a deep and developing group of forwards high on potential but short on experience.

In addition to Kassen and Burress, Platte County also continues to use freshmen Lily Kytasaari and Lauren Stone and sophomore Avery Webster up top. Some of those players could factor into the midfield rotation at some point, but for now, Brantley has also used freshmen Giada Cucchiara, sophomore Addison Mayne and junior Mackenzie Shields in increased roles. Hannah Stone and Dixon continue to battle nagging leg muscle injuries and only appeared briefly in the season-opener before being sidelined.

Even Platte County’s defense hasn’t been exempt from the shuffles. Kaser suffered a concussion during a 1-0 loss to Staley in the second game of the season, shifting Annabel Beeman from right back to goalkeeper — a position she has never played. The Pirates were already working with sophomore Alex Beeman and senior Triton Davey as debuting center backs with junior left back Morgan Stewart the only defender back in the same spot from the previous year. She split playing and starting time there as a sophomore.

“Having to adjust on the fly with players coming into new roles, it’s nice to see other players stepping up,” Brantley said. “We’re still getting goals; we’re still making those runs, creating opportunities and still covering in the back. It’s always nice to have more players you can depend.”

Platte County did bring back junior Cosette Stephenson for a second straight start at right back after she reached the required number of practices to play, but the Pirates had also used sophomore Delaney Childers and freshman Madison Palmer in that spot. Alex Beeman started her entire freshman season at right back before shifting over into the center of defense.

With senior all-state performer Paige Chase back in her role as a defensive midfielder, Platte County has remained solid with four clean sheets in six games. The Pirates have allowed just one goal in 319 minutes of action since allowing the only score late in the first half of the 1-0 loss to Staley last week.

Annabel Beeman made eight saves against Kearney with most coming on a long-distance efforts that caused her little stress. This marked her third clean sheet in four starts.

“Annabel’s doing pretty good, but we should be getting Finley back,” Brantley said.

Platte County avoided playing Kearney in the season-opening Platte County Invitational but continued its recent run of success in the rivalry series. The Pirates won all four meetings a year ago, including the Class 3 District 16 championship game after having lost the previous 19 games dating back to 2011.

With the win, Platte County opened 2-0 in Suburban Conference Blue Division play after winning the title a year ago.

Smith came up with her first hat trick of the season, and Kassen added a brace and an assist in Tuesday’s conference game over before halftime at Winnetonka High School in Kansas City.

Seven players factored in the scoring with Kassen scoring her two goals 31st and 33rd minute to make it 9-0, and Webster’s first goal of the season invoked the mercy rule in the 36th minute. Smith opened the offensive outburst in the fourth minute on a pass from Kytasaari, who then scored her first career goal two minutes later on a setup from Kassen.

Shields made it two consecutive games with a goal in the 16th minute, while Smith had her second and third goal in the 17th and 19th minutes, the second coming on a pass from Lauren Stone.

Chase then posted her first goal of the season in 26th minute to make it 7-0. Annabel Beeman did not have to make a save, while Platte County put up 26 shots on goal.

The Pirates’ carried over from last week in a hard-fought win with Smith tallying both goals Monday night at The Den in St. Joseph. She scored once in each half, sandwiched around Central’s equalizer

With Stephenson not yet available, hilders started again at right back and helped protect Annabel Beeman during her continued in-game training. She made just one save in the second of her now four straight starts since Kaser’s injury.

Smith’s solo work in the 14th minute gave Platte County a 1-0 lead, but Central ping-ponged in a ball past Annabel Beeman before the half to go into the break level. Smith added her second just seconds into the second half with a marker credited in the 41st minute. The Pirates held from there in a nonconference matchup.