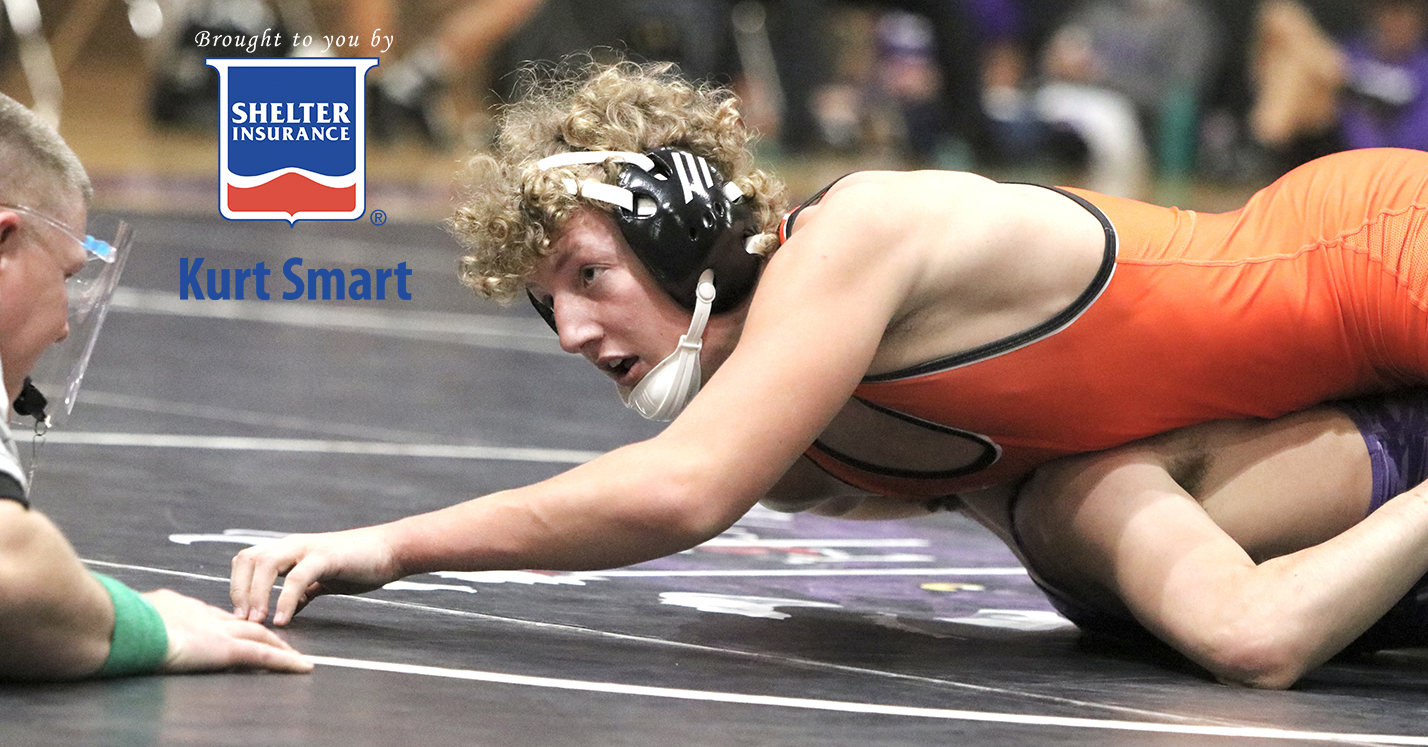 Platte County junior Jared Parsons works for a pin in the 152-pound match of a dual with Park Hill South on Tuesday in Riverside. ROSS MARTIN/PC Preps Extra

RIVERSIDE, Mo. — Platte County didn’t have the full complement of wrestlers available, and only seven matches were wrestled head-to-head. There’s still plenty left undecided about the season for the Pirates, who will be on an extended holiday break for another week.

For now, Platte County remains unbeaten in duals after a 57-22 victory over Park Hill South on Tuesday at Park Hill South High School. The Pirates never trailed after junior Jared Parsons opened with a pin in 1 minute, 13 seconds at 152 pounds against Mitchell Drumright.

“I don’t even know how to say it or word it,” said Parsons, one of six former Class 3 Missouri State Wrestling Championships qualifiers on the roster. “We only have 33 practices left in the season, I want to say. (I’ve) only wrestled five matches, just got to adapt quicker and get used to things.”

Platte County (4-0) generally spends the holidays competing in the Kansas City Stampede and one other large tournament bringing in teams from across the country. Typically the most difficult stretch of the season, the Pirates won’t face the same tests this time around due to schedule changes related to COVID-19.

“This year, we’re looking to peak one time instead of three different times during the year,” Platte County coach Reggie Burress said. “So looking at the end result, more than in three parts this year, and with a new schedule, it’s totally different.”

Instead, Platte County has swept a quad, competed in two eight-team tournaments and closed the first part of the season with a dominant victory over Park Hill South, which had just nine wrestlers in the lineup.

Parsons opened with the fall and junior Ben McDaniel took a forfeit at 160 before Keuhn pinned Roger Guillory just 11 seconds into the second period to put Platte County ahead 18-0. All three started the season late while helping the Pirates reach the Class 5 Show-Me Bowl in football and have had limited opportunities.

Keuhn in particular hadn’t wrestled since state as a freshman, meaning limited mat time this season takes on even more importance.

“I feel like we’re all starting to get it back going, all the football boys are getting back in the groove of things,” Parsons said.

Platte County also took forfeits at 182 (senior two-time state qualifier Drake Lacina) and 195 (budding freshman Jake Fernandez), bumping Walls up to 220 for just his fifth match of the season with Schillinger out. He tried an awkward and unorthodox experimental takedown early that failed but avoided any fallout and pinned Jacob Hicks in just 39 seconds.

After a forfeit for sophomore Mar’Quese Brown at 285, Platte County led 30-0 as the lineup turned over.

Caden Hulett, a freshman, stayed unbeaten for Platte County with an 8-2 decision over Connor Jackson. Hulett dominated start to finish but had a second straight close match, coming off of a sudden victory 5-3 decision in the championship of the Randy Starcher Memorial Tournament three days earlier in Tonganoxie, Kansas.

In that match, Hulett gave up a late stall point to tie the match and send it to overtime where he scored the winning takedown.

“I think probably the best thing about that match was after he got the stall call and sent to overtime, his mind reset really good,” Burress said.

Burge, McDaniel, Fernandez and Hulett will be four top contenders to be first-time state qualifiers for Platte County, which expects to be talented and competitive in the postseason pending health and outside circumstances.

“Obviously, our timing is a little bit off on a few places; we’re still working on some timing issues and just getting back in the swing of wrestling,” Burress said. “They’re pretty good at wrestling; it’s just getting them back in wrestling shape.”