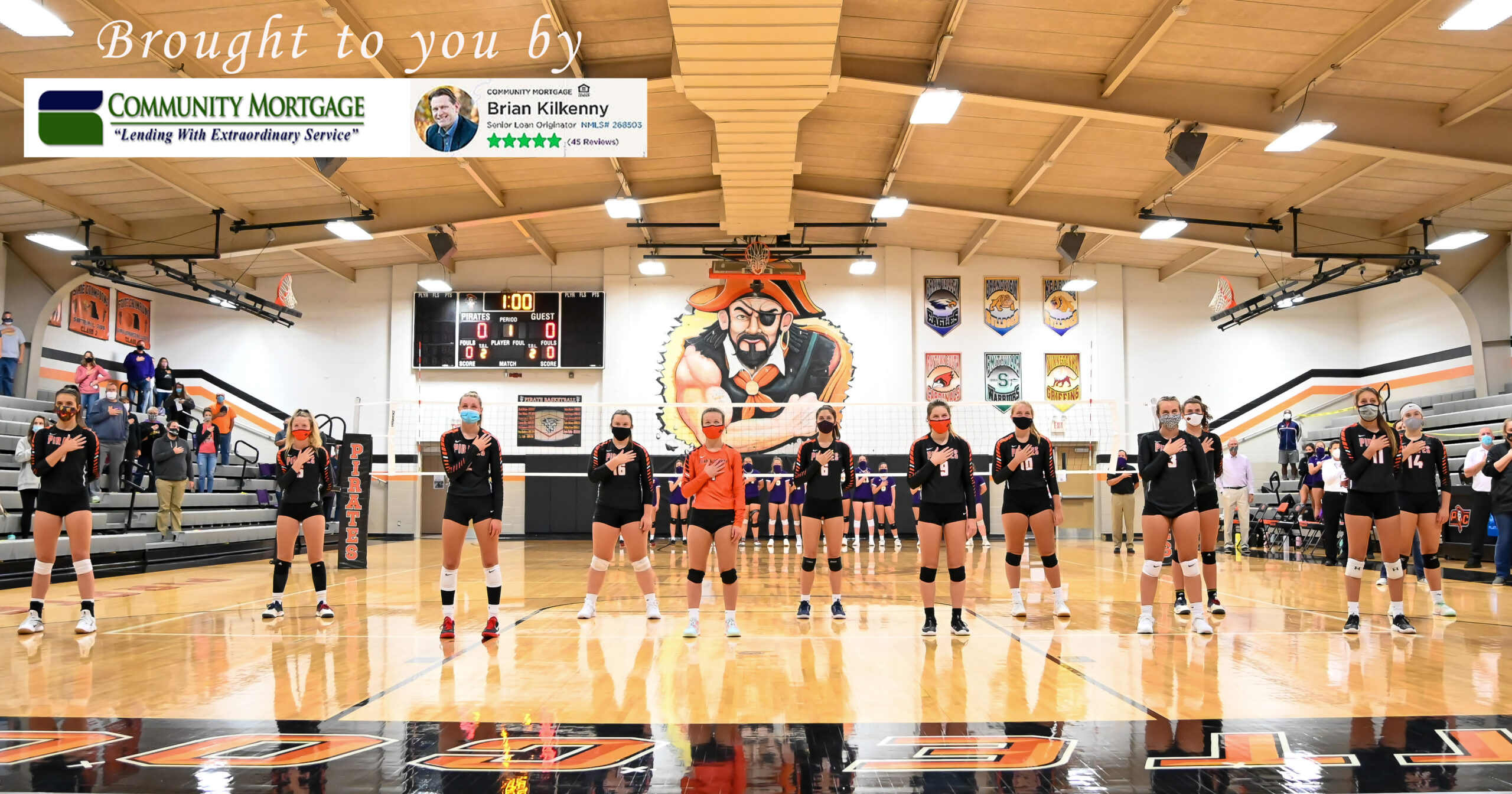 Down a set, Platte County’s players were in a familiar position, but this time around, the Pirates had their full complement of weapons available to try and come back.

Platte County made the most of the opportunity with a 23-25, 25-10, 25-8, 25-19 victory over rival Kearney on Thursday night at Platte County High School. The result differed from two losses in the opening weeks when the Pirates were without key starters in four-set losses to Park Hill and Liberty North.

In particular, Platte County senior setter and outside hitter Bryn McGehe made a huge difference with 22 assists and 10 kills in the win over Kearney after missing the first two matches of the season. The Pirates improved to 2-2 overall with a second straight win in Suburban Conference Blue Division play.

“We just all click super well,” McGehe said. “With us three back, it’s just our whole team is back together, so it’s nice and really fun. Our energy was super high, and it was a great (comeback).”

After completely dominating the second and third sets, Platte County went down 8-4 to start the fourth and potentially deciding set.

Strong service made the difference. Kate Brown, a junior outside hitter, recorded her fourth ace to bring the Pirates within 10-9 before they drew even at 10-10. Emerson Walter, a junior setter, then recorded back-to-back aces to tie it again at 13 and then give them their first lead of the fourth set at 14-13.

Brown and Walter again came up big on a key point to start the closing stretch. Walter came up with highlight-reel dig to keep a rally alive, and Brown finished it with a kill to make it 16-14.

Platte County then closed the set and the match with a 6-0 run that included a slick tip kill of an errant serve return from senior Aly Anderson and another ace from Brown, who missed the Pirates’ season-opener but has played in all three matches since.

“Our first set was kind of rough,” McGehe said. “We just got our jitters out. Then our second set and third set and fourth set, we just had so much energy, and it was so good. We just played as a team.”

Walter matched McGehe with 22 serves as Platte County’s offense looked much more like expected. Walter has taken over a starting spot after the graduation of four-year starter Ashley Bell and then had that role increase with McGehe out of action in the Pirates’ two-setter system.

“She’s really stepped up,” McGehe said of Walter. “And she’s really fun to play with. We work really well together, and she connects with all the hitters.”

In addition, Platte County had senior libero Presli Firkins back for a second straight game, and she recorded 13 digs. Anderson (15), Brown (11) and McGehe (10) also finished in double figures for digs as the Pirates’ defense rallied back from a slow start.

Platte County survived the first three set points with sophomore Karsyn Stehlik providing one of her three kills in the run to keep hope alive, but ultimately, the Pirates lost the opening set for the third time in four matches. This time, instead of watching, the Pirates had key players ready to lead a comeback.

“It’s super hard watching,” McGehe said. “But I think they did a really good job against Liberty North and Park Hill keeping their composure, and there were some good leaders out there. We always get in our head a little bit the first set against Kearney because we’re like, ‘It’s Kearney; we have to win this.’”

After the first set, Platte County was mostly dominant and found a way to beat its top rival.

Anderson continued her starring role in attack with 19 kills, while Brown and junior Mary Grace Hunter had nine apiece. Hunter continued to play a big role, having stepped into a larger role due to the early-season absences. The Pirates also had 13 aces total — two more from senior Haley Luna, who also had four kills from her middle hitter spot.

The Pirates earned their first win of the season with an easy 25-4, 25-9, 25-9 Blue Division win Tuesday in Grandview.

In the first three-set match of the season, Platte County dominated from start to finish with McGehe and Perkins making their season debuts. The attack was spread out with Anderson tallying eight kills, Luna six, McGehe and senior Cameron Brown three apiece, Kate Brown four and Stehlik three.

McGehe had a staggering nine service aces, while Walter had seven more, and the duo had 12 assists apiece.