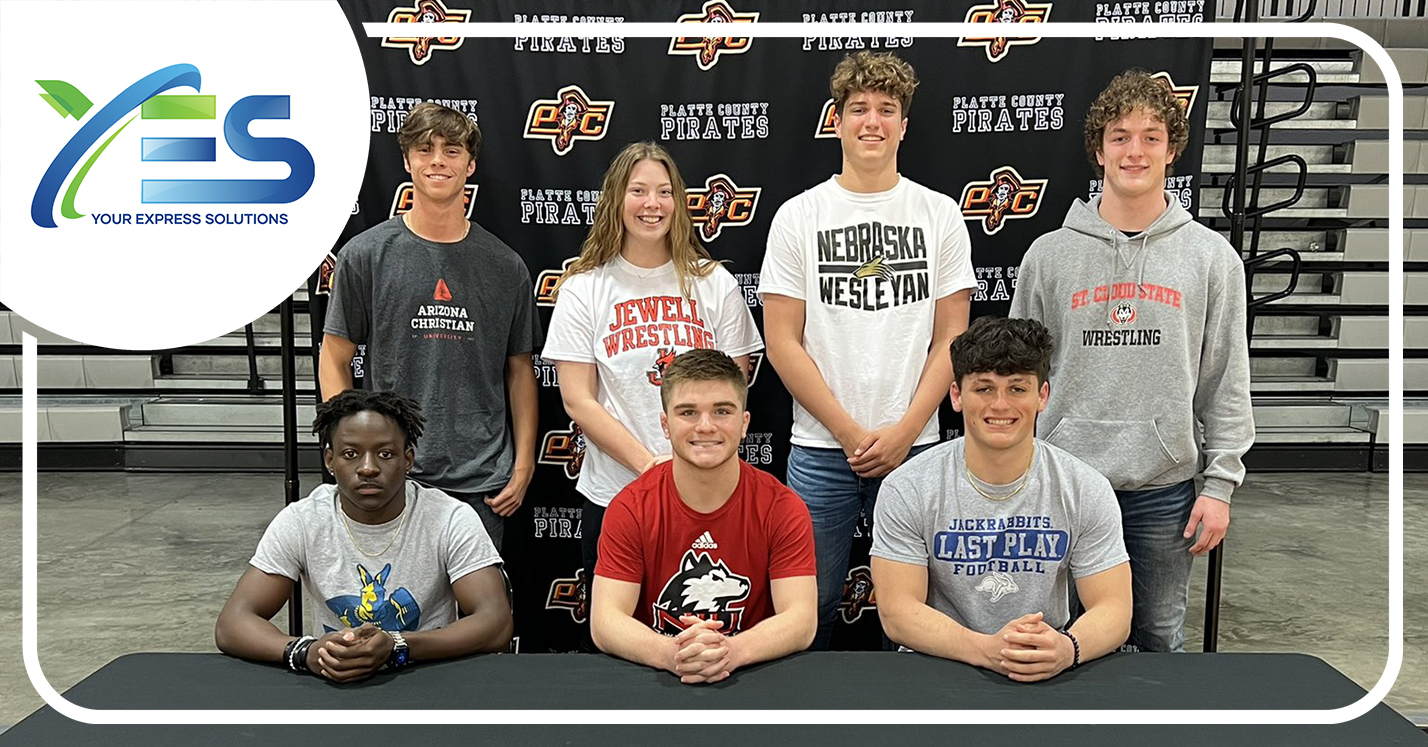 Platte County’s final signing ceremony of the school year included three Division I commits in a group of seven standout athletes. There were 13 total all-state honors spread between the signees.

Scott, a three-sport standout as a senior, earned back-to-back selections to the Missouri Football Coaches Association Class 5 all-state team after a decorated four-year career. He started the final 45 games at linebacker, beginning with the regular season finale of his freshman campaign in 2018.

In all, Scott totaled 285 tackles (39 1/2 for loss), 25 sacks, six forced fumbles, two fumble recoveries and an interception, which he returned for the lone touchdown of his career as a sophomore in a blowout of Kearney that ended a long losing streak to one of Platte County’s biggest rivals. He played a key role in Platte County reaching the 2019 Class 4 Show-Me Bowl and the 2020 Class 5 Show-Me Bowl. The Pirates became the first team in state history to finish as state runnerup in back-to-back seasons while playing in two different classes after losses to Webb City and Jackson, respectively.

Scott recorded team-highs of 83 tackles, 18 tackles for loss and three forced fumbles along with six sacks and a fumble recovery in his senior season, which ended with a loss to Fort Osage in the Class 5 District 8 title game. He repeated as a first-team all-state selection and garnered interest from a wide variety of Division I and Division II teams before choosing South Dakota State as the place to continue his career. The Jackrabbits went 11-4 in 2021 and reached the Division I FCS national semifinals before losing at Montana State.

In addition to being a two-time Suburban Conference Blue Division defensive player of the year and claiming shares of league titles in 2019 and 2020, Scott also made the All-Simone Team as a junior and senior at linebacker in recognition of his spot as one of the top players in the Kansas City region. He also made the finalist list for the Bobby Bell Award, given to the top lineman or linebacker in small schools for the metro area.

In the winter, Scott went out for wrestling as a first-year senior and eventually took the 182-pound varsity spot and came up one win shy of advancing out of Class 3 District 8. He then finished his year in track and field, going to the Class 5 District 8 finals in the 100-meter dash and eventually earning a state return in the 4×100 relay that set a school record each of the past two years. The Pirates’ quartet of Scott, Sewankambo, senior Cole Rhoden and junior Nate Walls ran a season-best 42.84 seconds in the Class 5 Missouri State Track and Field Championships to place sixth and earn all-state honors, trimming time from the prior week’s Sectional 4 runnerup time of 42.89. Both performances were school records, part of a run of three third straight weekends with a sub-43 time that beat the prior best effort in program history set a year earlier in the Class 4 postseason (43.57).

Sewankambo ran anchor for the 4×100 and became a first-time all-state honoree. He burst onto the scene as a junior and helped the school-record squad that included Scott, Garrett Smith-Dean and Carter Salzman, but a botched exchange in the Class 4 state preliminaries led to their disqualification.

Also a Class 4 state qualifier in the long jump, Sewankambo’s path back increased in difficulty when Platte County bumped to Class 5 this season. He still reached Class 5 Sectional 4 in the 100, 4×100 and long jump and then advanced back to state in both sprint events.

A slow start in the state 100 preliminaries torpedoed his chances at a second medal, coming in 16 out of 16 qualifiers at 11.77. His career-best time of 10.86 came a week earlier at Sectional 4, and he won the District 8 title in surprise fashion to start his postseason effort.

The potential of the twitchy fast sprinter caught the attention of UMKC, which is restarting its Division I track and field program after briefly eliminating the sport.

Platte County entered the season without a state finalist since 2018, and Rocha was the first of three to punch his ticket this past February with a semifinal victory. He matched up with Whitfield sophomore and defending 126 state champion Gavin Linsman (40-5) in the final. Linsman took an early 4-0 lead and eventually wound up with an 11-2 major decision.

Rocha ended his senior season at 16-4 with with his first three losses all by injury default due to an early-season concussion and later a high ankle sprain.

A three-time district champion, Rocha placed fourth at state as a freshman and then injury defaulted to sixth as a sophomore due to a banged-up knee for what was Platte County’s only medal that season. He lost to the eventual state champion both years and went into the postseason undefeated as a junior before losing to Neosho’s Eli Zar in the 145-pound semifinals, leaving him with just one chance left to reach a state final and earn an elusive championship. He injury defaulted his Class 3 District 4 title match a week before state to rest the still-injured ankle and continued to receive treatment throughout the state tournament.

Rocha ended up one win shy of the title but compiled a 131-18 record in high school and will continue his wrestling career at Division I Northern Illinois, a member of the Mid-American Conference.

After a Class 5 all-state football campaign at defensive end that included a team-high 8 1/2 sacks and 49 tackles (17 for loss), Walls ended Platte County’s individual state champion drought in wrestling with his state title at 195 pounds. A year earlier, he finished third place at the same weight after a semifinal loss.

Walls (36-7) also dealt with adversity in his career, qualifying for state as a freshman at 170 but missed his entire sophomore season to a shoulder injury suffered in football. His junior season included district and sectional titles in an expanded postseason format due to COVID-19 protocols, and he didn’t win a tournament as a senior until claiming the Class 3 District 4 title to open the postseason due to the Pirates’ traditionally tough schedule.

At state, Walls made a dominant run through the bracket with wins over Missouri Wrestling’s fourth-, fifth- and third-ranked wrestlers in the final three matches of his career at Platte County. That included an 8-2 win over Bolivar junior Blake Goodman in the championship bout. With the win, he became the first state champion for the Pirates since Cody Phippen won his third and Sage Smart his first in 2018.

Walls was a second-team all-state selection in football and entertained offers to continue his career in that sport before ultimately choosing Division II St. Cloud State in St. Cloud, Minnesota.

Munn capped her trailblazing four-year career with so many “firsts” that she will assuredly have her name associated with numerous program records for years to come. Now, she plans to continue her career alongside former teammate Sabrina Bertram at Division II William Jewell in Liberty, Missouri.

No record book existed when Munn joined Platte County’s inaugural girls wrestling team in 2018-2019 season. Four years later, she leaves having written and rewritten the contents multiple times and leaves as the owner of nearly every meaningful record and superlative in a short history.

Munn (35-3) brought her career to a fitting close in the 194-pound Girls Missouri State Wrestling Championships title match, topping Springfield Central junior Catherine Dutton with a 2-0 decision to become the Pirates’ first state champion. Add that to the following list:

The list might also include a statewide superlative. With no other records to the contrary, KayLyn Munn and her father Jason Munn are believed to be the first father-daughter state champions in Missouri history. Jason Munn won a state title in 1988 at Kirksville, while Munn is one of the first 48 girls state champions crowned since the Missouri State High School Activities Association first sponsored the sport four years earlier.

At state as a senior, Munn (35-3) went the full 6 minutes in all three of her matches and avenged two of the minimal losses on her career ledger along the way, none more meaningful than the state finals rematch with previously unbeaten Dutton (27-1).

A year earlier, Dutton turned and pinned Munn at 3 minutes, 11 seconds in the second period of a 195-pound championship match she led 2-0 after the first period. She started her career as a freshman state qualifier at 187 who missed a medal by one match then finished sixth place at 187 as a sophomore before making the finals alongside Bertram as a junior with both finishing as runnersup.

Havemeier and Macaluso were key starters in one of the best seasons in program history, two years removed from being part of the best.

Platte County went 20-4 this past fall, winning 20 games for just the second time ever and second time in three seasons. Havemeier started the 2019 Class 3 state championship game as a sophomore while Macaluso, who will play for NAIA Arizona Christian in Glendale, appeared as a reserve when the Pirates ended up with an inspiring run to a runnerup showing. A year later, the Pirates went 11-6 with a loss to Smithville in a smaller Class 3 District 16 postseason setup.

Havemeier and Macaluso were part of a 12-deep senior class eyeing a return to the playoffs but instead saw the season end with a 3-1 loss to Guadalupe Centers in the Class 3 District 8 title game.

Platte County opened this season with 10 straight victories — all by shutout — and went on to win 2 of 3 vs. Smithville with a regular season split of 1-0 results resulting in a shared Suburban Conference Blue Division title. The Pirates allowed just nine goals all season (0.4 goals per game). The Pirates won the first meeting with Guadalupe Centers 3-0 and had not allowed more than two goals in any game until the District 8 final.

In all, 18 of Platte County’s 20 wins were by shutout with a three-man backline of seniors Havemeier, Sawyer Allen and Spencer Hay plus senior holding midfielder Luke Bunge anchoring the defensive portion of a new-look 3-5-2 formation.

However, Platte County went into the title game far from full strength due to players in COVID-19, and Macaluso, who missed one game with a broken foot suffered Oct. 19 against Ruskin, picked up a red card in the second half of a 3-1 district semifinal win over Smithville two days earlier and missed the game due to suspension, taking away one of the top attacking options for an offense that averaged 4.0 goals per game. Even Havemeier, who will continue his career at Division III Nebraska Wesleyan in Lincoln, became a big part of the option with the 6-foot-4 defender becoming a target on some set pieces while triggering shots and crosses on others.