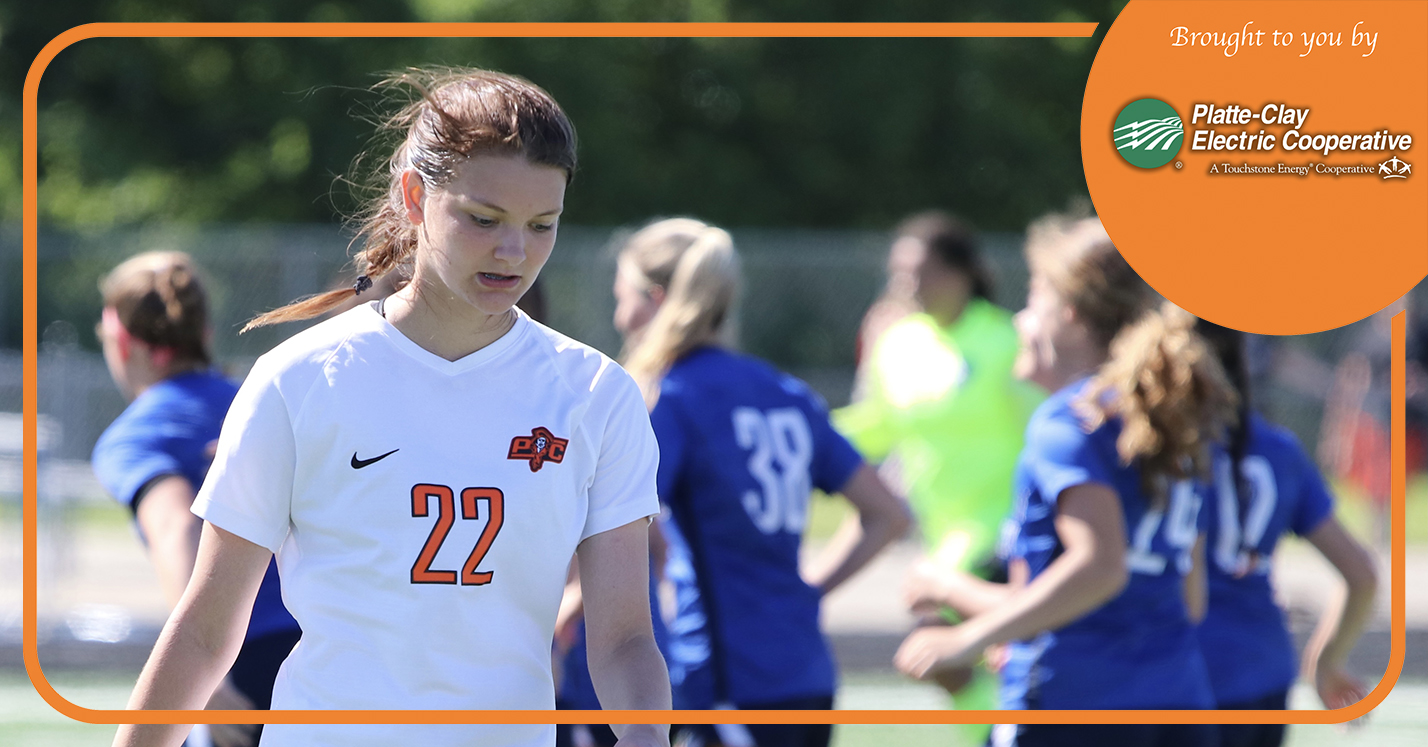 Platte County soccer shut out of playoffs at Grain Valley

In the end, Platte County couldn’t come up with the key strike with Williams making a handful of highlight reel saves while occasionally breathing a sigh of relief after a miscue led to an unfulfilled goal-scoring opportunity. The Pirates’ historic season came to an end with a 2-0 loss at Grain Valley High School.

Shut out for just the third time this season, Platte County finished with a 24-3 record, recording the third-most wins in a season in program history but coming up just one game short of the the second state semifinal appearance since going 26-4 and recording a fourth-place Class 2 finish in 2010. The Pirates were 25-3 in 2009.

The three shutouts were their only losses this spring.

Williams recorded eight saves for Grain Valley (23-2-1), which went on to finish as the state runnerup after a loss to Fort Zumwalt South in Thursday’s Class 3 championship game. She made an acrobatic save in the 19th minute while avoiding a seemingly inevitable rebound to keep the game scoreless and added a one-on-one denial to protect a 1-0 lead in the 32nd minute after freshman Meghan Knust had provided the game’s opening goal 7 minutes earlier.

In the final minute of the first half, Platte County freshman Addison Bradley headed a free kick over Williams into a scrum in the middle of the box before a Grain Valley defender stepped in to clear the ball out of danger before the Pirates could generate a true shot.

For the most part, Grain Valley limited the chances of Platte County star junior midfielder Riley Smith, who scored in all but six games this season.

“I think in the midfield they kept possession more, and we didn’t get Riley the ball like we normally would have,” Brantley said. “Or when she did have it, they close her down pretty quickly — two or three players — so there wasn’t much dribbling she could do. They adjusted to us well.”

Opposite of Williams, Platte County senior goalkeeper Avery Krahenbill made seven saves, none bigger than when she came off her line in the 50th minute to stop a quick counterattack and knock the ball away for a corner kick that came to nothing. The Pirates remained down just one goal, and junior forward Hannah Stone came up with back-to-back chances in the 60th and 61st minutes with dangerous right-footed shots from a tight angle on the right, only for Williams to smother both.

In the 65th minute, a great angled pass into the box freed Grain Valley freshman Annabell Totta for a one-on-one chance with Krahenbill, who dove to her right only to see the right-footed finish roll past her and into the left netting.

Platte County nearly struck right back after going down 2-0 with Bradley cheating a cross from senior Kylene Loy straight at Williams. Moment later int he 71st minute, Williams overran the play coming off of her line, and the ball fell to Pirates senior Allie Corbin, who fired a shot from 13 yards out in the middle of the box well over the goal.

“Today wasn’t that day, and (Grain Valley was) working in that box to get it out of there,” Brantley said. “First half, we had to learn she was playing high and our normal balls that we would put through weren’t working for us so we had to adjust our play a little bit, which I think they read us well, but there were those few opportunities where I thought we would get in only if it would just bounce one more time but there was always someone there, and that’s good soccer.”

Corbin also took the first solid chance for Platte County, which overcame a nervy start that led to a few tense moments. She nearly gave the Pirates a 1-0 lead when a cross from Loy trickled through to her but the shot again went high in the seventh minute.

Both teams created early chances with none better than when Corbin deflected a pass from Bradley into the path of Stone in the 19th minute. She took a left-footed from the left that Williams went low to stop, but the ball counted straight up and appeared to be loose until she corralled it out of the air to avoid a rebound.

Grain Valley hit the side netting in the 23rd minute, and two minutes later, the Eagles took the lead for good. A dangerous ball pinged around the box before falling to Knust who calmly finished past Krahenbill.

“Both teams came out ready to go,” Brantley said. “Each team created those chances, and yeah, they put one in first. Frustrating, but we had been in that position before so our heads didn’t go down.”

Platte County continued to pressure, and in the 32nd minute, senior defender Ryanne Rhude opened Smith for a direct run through the Grain Valley defense in the 32nd minute. Smith set up Stone for a one-on-one chance, but Williams’ aggressive style paid off, sliding in to snuff out the attack.

Krahenbill then made two key saves in the closing minutes of the first half in one-on-one situations that looked even more important when Smith’s dangerous free kick ended up in front of an open net courtesy of Bradley, only for the Eagles’ defense to bail Williams out.

However, the frustrations and near misses continued for Platte County, which recorded 16 shutouts on the season behind the experienced senior center back combo of Rhude and Emma Murray. However, the Pirates gave up goals in each of its postseason games and survived a test at Van Horn for a 3-2 sectional win days earlier, the first playoff win for the program since the 2010 run to the state semifinals.

Platte County’s nine-member senior class of Rhude, Murray, Krahenbill, Loy, Corbin, Alejandra Anguiano, Mallie Fine, Grace Neece and Abbey Rolofson included seven players who started all or part of the season. The Pirates also endured key injuries to Neece, who missed the final half of the season due to a head injury after splitting time with Krahenbill through the North Kansas City Tournament, and junior forward Aleah Dixon (knee).

Additionally, a nagging ankle injury bothered Stone all the way to the final whistle, while sophomore forward Sloan Kassen missed most of her regular minutes Saturday due to illness. Even Smith missed one game with a toe injury, a 1-0 loss to Smithville.

Despite the setbacks, Platte County won its first conference title since 2009 and reached the playoffs for the first time since 2016 courtesy of a 2-1 win overtime win over Kearney in the District 16 final.