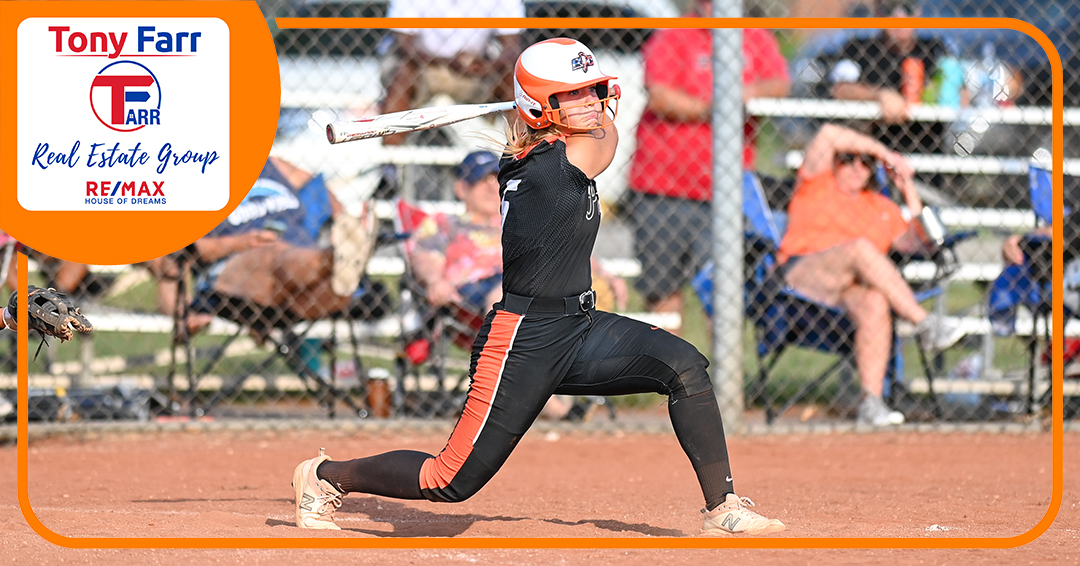 “I honestly wasn’t worried when Kearney went up 4-0 in the first inning because the first time we hit, we had good solid contact every time,” Peoples said. “I knew our hits would fall and we were going to score a lot of runs. But like every game this season, I knew we would have to score a lot of runs and then work really hard for our defense and pitching to be able to finish the game.”

Platte County, now 13-7 overall and 7-1 in conference play, scored runs in bunches, putting up seven in the second to take the lead for good and adding six in the fourth, four in the sixth and five in the seventh.

Webster finished with just one hit but drove in five in six at-bats from the leadoff spot. Kearney committed six errors total, and two of them plus a walk to sophomore outfielder Anna Crowell brought Webster to the plate with one out and the bases loaded in the top of the second. She tied the score with one swing, hammering her first career home run to center field.

Suddenly tied at 4-4, Platte County built on the momentum with another walk and an error. Gill followed with a one-out, two-run double to put the Pirates up 6-4, and Shields followed with an RBI single to complete the seven-run inning.

Platte County sophomore pitcher Kallie Hitzelberger started and threw the first four innings and gave up seven runs on 11 hits and a walk. However, she exited with 13-7 lead thanks to the Pirates’ six-run fourth.

A walk, an error and a single from junior shortstop Demi Riechers loaded the bases again for Platte County in the inning, and senior outfielder Koree Church scored two with a double to right field, and Hitzelberger helped her own cause with a two-run single to increase the lead to 11-5 at the time. Webster added an RBI groundout, and junior center fielder Reynolds hit a sacrifice fly to make it 13-5.

Kearney scored a pair in the bottom of the fourth to close within 13-7, and Platte County countered by bringing senior Chloe Helmer in relief and eventually Shields to finish the game.

“At the beginning of this season, I thought defense was going to be our strength, and we would have to produce hits here and there to win games,” People said. “However, it has been the opposite. Our hitting has 100% been our strength and we have had to work a little bit harder with defense and pitching.”

Kearney drew within 13-10 with three runs off of Helmer in 2/3 of an inning. She walked four. Shields pitched the final 2 1/3 innings, collecting three of the Pirates’ five strikeouts and allowing only a single run in the bottom of the seventh.

By then, Platte County had extended the lead back out to 22-10.

“Mackenzie came in and did a great job shutting their hitting down and finishing the game for us,” People said.

Three straight walks with one out to Reynolds, Lawson and Gill brought Shields to the plate with the bases loaded, and she teed off with a grand slam to left field to make it 17-10. After Kearney ent down in order, the Pirates came to the plate again and Crowell, who went 2-for-4 with a walk and scored three runs from the No. 9 spot, singled to lead off the inning, and Reynolds walked with one out on four pitches. Lawson then lifted her fourth home run of the season, a line shot over the center field fence to make it 20-10.

Gill then singled, and Shields homered to left field again, her fourth of the season, as well.

Platte County went 1-3 in a weekend trip to Papillion, Nebraska, but continued to display solid hitting across the board despite the uneven results.

Placed in Pool B, Platte County, Lincoln Southwest and Millard West all went 1-1 leading to a tiebreaker scenario for the following day. The Pirates allowed the most runs and placed third, putting them in the third-place bracket on Saturday.

Platte County opened Friday with a wire-to-wire 8-5 win in five innings over Millard West due to the time limit. The Pirates scored twice in the bottom of the first and led 6-1 after the second. Lawson plated the first run with a groundout, and Gill made it 2-0 with a sacrifice fly — the second an unearned run due to an error earlier in the inning.

Crowell kickstarted Platte County’s four-run second with a one-out double that moved Riechers, who led off with a walk, to third. Hitzelberger followed with a two-run single, and she later scored along with Webster on Lawson’s two-run single.

Platte County led 8-2 going to the top of the fifth. Millard West plated three more against Hitzelberger, who allowed 12 hits and three walks while striking out one while earning the win.

The 13-0 loss to Lincoln Southwest in three innings to close pool play ended up dooming Platte County to the third-place finish. Morgan Shields, a sophomore, came up with the Pirates’ lone hit — a single — and Helmer and Mackenzie Shields allowed 13 runs in only two innings but only four were earned due to a pair of errors.

In Saturday’s bracket opener, Platte County lost a 5-0 lead late to Lincoln Southeast. The Pirates were clutch in scoring runs in each of the first four innings. Gill came up with a two-out single in the top of the first to score Reynolds for a 1-0 lead, while Webster plated one with a sacrifice fly and Reynolds another with a single — both with two outs in the second to make it 3-0.

However, Platte County missed a chance to break the game open in the second.

Riechers walked with one out and stole second, scoring on a single from Church. A single for Hitzelberger and an error loaded the bases for Platte County, but Lincoln Southeast escaped the jam down 4-0. The The Pirates made it 5-0 in the fourth when courtesy runner Ava Carter scored on a passed ball with two outs.

Platte County couldn’t hold the lead with Hitzelberger allowing two runs in the fifth and four more in the sixth in what ended up a walkoff scenario. Lincoln Southeast had 13 hits total and overcame four total errors to earn the win.

In the finale, Platte County took a 4-1 lead after the bottom of the third on Papillion-LaVista South. An unearned run on an error in the first put the Pirates ahead 1-0, and a walk for Webster and another error gave them a 2-1 advantage in the third. Reynolds, who reached on the error in the third, was later caught stealing after Lawson singled, erasing a potential run.

Gill hit a two-run home run to center field, her third of the season, shortly after losing the runner, giving Platte County a 4-1 lead. Helmer started for the Pirates and gave up three runs on three hits and three walks while striking out two in four innings of work. Hitzelberger allowed the tying run in the fifth and the eventual winning run in the sixth, yielding three hits and a walk.

Platte County had just three hits but benefited from five Papillion-LaVista errors. Riechers and Church walked to start the sixth but both were stranded as the potential tying and winning runs for the Pirates.

Hitzelberger threw a three-inning one-hitter Thursday in Raytown to lead the Pirates to a third straight Blue Division win at that point.

Platte County scored six in the first, five in the second and four in the third to invoke the early run rule. Reynolds, Lawson and Church all recorded two hits apiec in the middle of the order. Church in particular continued to shine in her opportunities, doubling twice and driving in three.

In the first, Webster led off with a single, and Reynolds walked. Lawson followed with an RBI single, and Mackenzie Shields then cleared the bases with a triple and scored herself on an error to put Platte County up 4-0. Church had RBI doubles in the second and third, and her two-run hit in the third put the Pirates in position to win on the run-rule.

The Pirates swept a doubleheader Tuesday at Platte Ridge Park, bouncing right back from a Blue Division loss the night before at Smithville.

Mackenzie Shields threw a three-inning no-hitter but walked two and hit a batter and allowed a run in the second inning. She hit the leadoff hitter and then walked one. After a passed ball, Grandview scored the runner with a groundout.

In the second game, Hitzelberger allowed just one hit and struck out four in three innings for Platte County, while the Pirates’ offense pounded out 15 hits and drew three walks in just two turns at the plate. Platte County junior Jules Knudsen (three), Gill (three), hurch (three) and Crowell (two) all collected multiple hits and drove in three runs apiece. Gill doubled and homered to center in the first inning, while Hitzelberger, Knudsen, Church and Reed all doubled in the first inning.

Platte County led 13-0 after the first and scored five in the second inning without an extra-base hit.